If there wasn’t a global pandemic to worry about, then Google would have held its annual developer conference, Google I/O, in Mountain View, California this week. At last year’s I/O, Google unveiled its first-ever mid-range Pixel devices, the Pixel 3a and 3a XL. This year, we’re expecting Google to follow-up with a new mid-range Pixel smartphone called the Pixel 4a. We don’t know when exactly this 2020 mid-range Pixel will be announced, but thanks to leaks, we know pretty much all there is to know about it. Ahead of the Google Pixel 4a announcement, we can detail the phone’s performance thanks to benchmarks performed on pre-release hardware.

To date, the most substantive leaks of the Pixel 4a have come from Cuban YouTuber Julio Lusson who runs the TecnoLike Plus channel. Last week, he shared multiple photos he took from his pre-release Pixel 4a, giving us an early look at the camera performance of Google’s 2020 mid-range Pixel. Today, he has published a video on his YouTube channel showcasing the performance of this upcoming smartphone in various benchmarking applications. He shared the raw results with us before publishing the video, allowing us to compile and analyze the data into the below tables and charts. Take note that since he performed these benchmarks on pre-release hardware running pre-release software, there’s a chance that the retail units may perform slightly better in benchmarks if Google has further optimized the performance.

Julio’s video below shows him running the Pixel 4a through multiple benchmarks, and it even offers a few glimpses at games like The Legend of Zelda: The Wind Waker for the Nintendo GameCube (via Dolphin Emulator) and PUBG Mobile running on the device. The video is in Spanish, though, so keep reading below if you’re interested in the benchmark results we put together.

Quick Overview of Each Benchmark

With input from Mario Serrafero

AnTuTu isn’t my preferred benchmark, especially after it got booted off the Play Store, but there’s no denying it’s one of the most popular benchmarks for Android devices. In this test, the Pixel 4a scores overall about ~48% as high as the Qualcomm Reference Device and ~70% as high as the Pixel 4, but it does about as well as the Pixel 3 XL and substantially better than the Pixel 3a XL. When we looked at AnTuTu’s subscores, we can see that the Pixel 4a scores fairly well in the CPU, Memory, and UX tests but falls significantly behind all the Snapdragon 8-series processors we tested when it comes to the GPU tests. In fact, the Pixel 4a outperformed the Pixel 3 XL in most of AnTuTu’s tests except for the GPU ones, where the Pixel 4a performed 50% to 60% as well as the Pixel 3 XL. The Pixel 4a’s performance in AnTuTu’s Memory tests is about on par with that of the Pixel 4 and Pixel 3 XL—no surprise, though, since all of these devices have similar memory configurations. The Pixel 4a’s overall UX score in AnTuTu is also about on par with that of the Pixel 4, but it’s about 35-36% higher than the scores for the Pixel 3 XL and Pixel 3a XL. Out of all of these devices, however, the Pixel 4 will still offer the best real-world UI performance since we can’t discount the fact that it’s the only Pixel device with a 90Hz refresh rate panel. Overall, the Pixel 4a outperforms the Pixel 3a XL in nearly every test in AnTuTu while it unsurprisingly underperforms the QRD in every test. 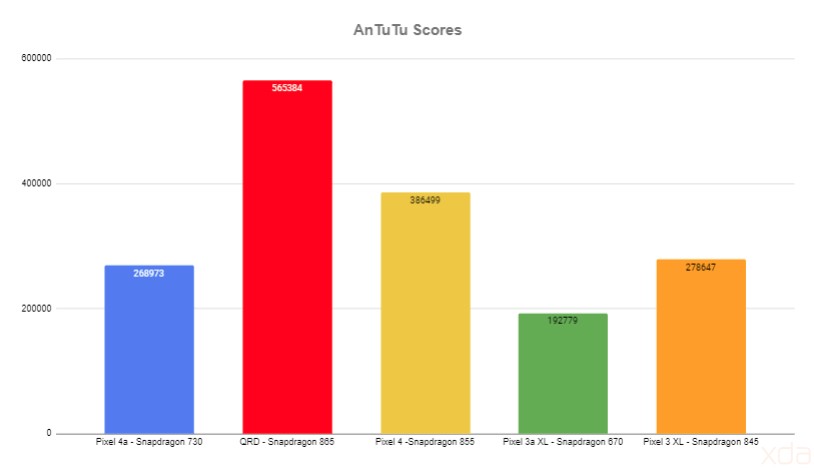 PCMark is one of my favorite benchmarks because of its emphasis on real-world performance. While there’s a big gap in the scores between the Pixel 4a and the Pixel 3a XL, there’s a much smaller gap in the scores between the former device and the Pixel 4 or Pixel 3 XL. The QRD predictably blows the competition out of the water because of its superior hardware across the board, so it’s not even worth analyzing its subscores. The Pixel 4a’s subscores for PCMark’s Writing 2.0 and Photo Editing 2.0 tests are much higher (44% and 56% respectively) than the Pixel 3a XL’s, which is good news for users looking to perform basic document and image editing tasks on their device. 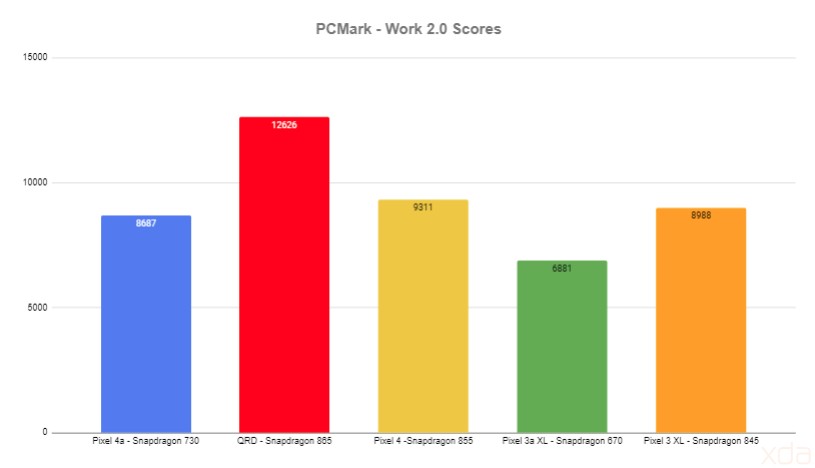 Julio was only able to share a single result from GFXBench with us, but it clearly demonstrates what I was talking about earlier in regards to the GPU performance: The Adreno 618 in the Snapdragon 730 is majorly outclassed by the Adreno GPUs in Qualcomm’s Snapdragon 8-series. GFXBench’s Aztec Ruins test is Kishonti’s most computationally intensive graphics test by far but it’s not representative of most Android games, so don’t let these results discourage you from trying to play games on the Google Pixel 4a. I would bet that most games will run just fine on the device, even the notoriously performance-intensive ones like Fortnite Mobile, provided you’re willing to turn down some of the graphical settings. For what it’s worth, Julio told me that he played a round of PUBG Mobile just fine at the game’s “High” graphics preset. 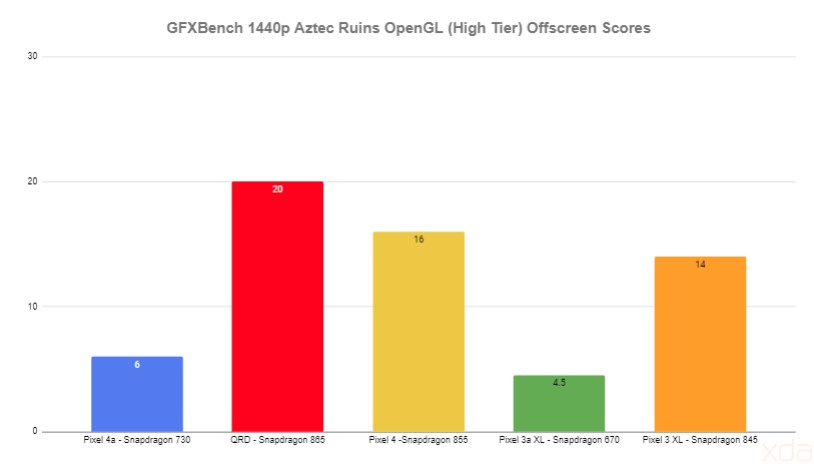 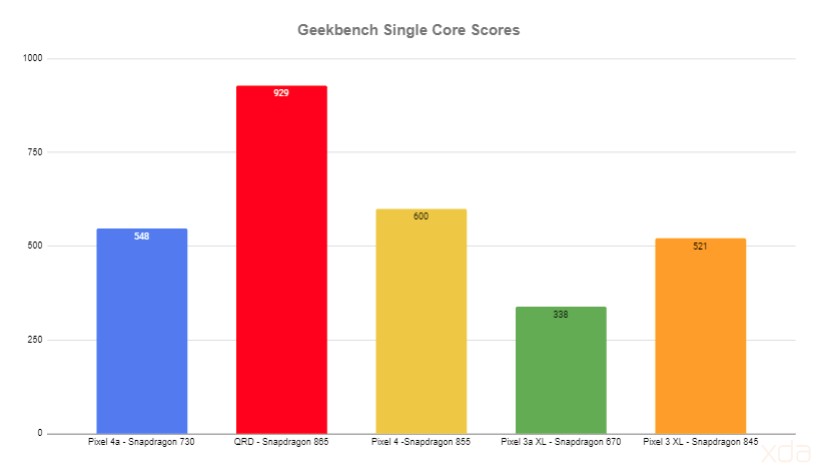 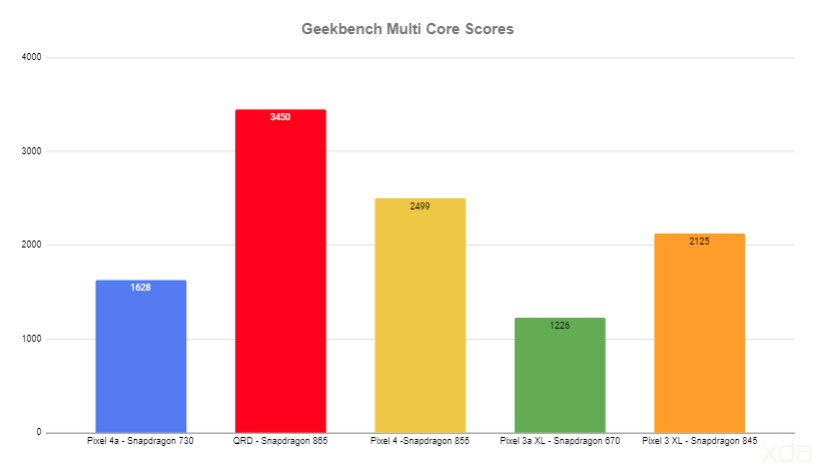 Here’s a table summarizing the overall benchmark scores charted on these bar graphs. To keep this table from becoming too massive, we didn’t include the subscores for each test—if you’re interested in seeing those results, then feel free to reach out to me.

The Google Pixel 4a is shaping up to be an excellent mid-range smartphone. If the rumored $399 starting price is correct, that would make the Pixel 4a a direct competitor to the Apple iPhone SE (2020) and Samsung Galaxy A51. While Google may not be packing the greatest hardware in this device, we can be sure that the phone will be capable of taking excellent photos. Google’s software will also be a huge advantage over other mid-range offerings. While some companies were basically goaded into committing to just providing 2 years of Android updates, Google offers 3 years on all Pixel devices. What’s more is that the Pixel 4a will feature most Pixel software features that have been announced already, including Now Playing, Live Caption, and the new Google Assistant (which Julio confirmed to us is supported). All that’s left is for Google to just announce the phone already, but we may have to wait until June 3rd for that to happen.

The post Early Google Pixel 4a performance review compares the 2020 mid-range Pixel to the Pixel 4, Pixel 3a, and Pixel 3 XL appeared first on xda-developers.