The Echo Flex literally plugs a gap but can you have too many Echo devices?

It doesn’t take a genius to infer that Amazon’s Echo series of smart speakers is doing well. Not only has Alexa entered into pop culture but the company has an implausible number of spinoffs from the Echo Show to the dinky Dot, alongside buttons, inputs, a clock and a subwoofer for added bass.

Generally, they’ve been sensible additions that bring something new to the table, or at least introduce a form factor that appeal to a new niche people. Does the Echo Flex continue that trend or has Amazon finally gone too far? Echo Flex review: What you need to know

The Echo Flex is Alexa in a wall plug. Plug it into a power outlet, and you have another point in your house where Alexa is listening in and ready to react. It can answer questions, tell you about your calendar for the day, give you a weather forecast and control smart home devices, just like any other Echo smart speaker. On the plug itself there are only two buttons: one that cuts the microphone for privacy, and another for getting Alexa’s attention without saying the wake word. Volume, therefore, can only be controlled by the voice and it doesn’t go that high.
It does everything any other Echo speaker can do but with significantly weaker sound quality, thanks to its teeny-tiny 0.6in mini speaker. Playing music on it is suitably painful, although no more so than the quality from the second-generation Echo Dot, which is quite impressive when you think about it. It’s fine for voice commands, with sound quality similar to old clock radios but anything more advanced will require an upgrade.
Fortunately, as with other Echo devices, it also has a 3.5mm audio-out jack, so that poor sound quality is fixable by connecting it to another speaker, although doing so will take up another plug socket, which kind of takes away the point of its convenient form factor. Indeed, at that point, you might as well just buy an Echo Input. The Flex also supports audio over Bluetooth, although I could only get this working via the Alexa app. Trying to set it up via the usual methods of saying “Alexa, connect Bluetooth” resulted in it instantly replying there was nothing available to connect, clearly without checking.
At the bottom of the plug, there’s a USB Type-A port, meaning the Echo Flex can double up as a charger for your phone or tablet, which is quite smart/. But what’s even smarter is that Amazon has its own addons that can transform the Echo Flex into something more useful. Both the multi-colour night light and the motion sensor attach neatly into the bottom of the plug, offering extra functionality as part of a smart home. We weren’t sent either of these for review, but it’s an idea that makes the Echo Flex considerably more appealing.

The key question is, however, whether the Echo Flex is worth the money. It’s not particularly expensive, costing £25 while the night light and motion sensor add-ons cost £15 each. As per usual with Echo products, the Flex’s main competition is other Echo devices. The most obvious one is the Echo Input, which sells for £35. The Echo Dot is a far better standalone speaker that normally sells for £50 but is frequently discounted so do consider shopping around.
Google’s rival to the Echo Dot, the Google Nest Mini, also costs £50 but gets the same level of frequent discounts. Sound quality is weaker and there’s no audio-out jack to improve it, but Google Assistant is far smarter, so horses for courses.

The Echo Flex is a strange product and my first instinct was to wonder why anybody would pick it over an Echo Dot. After all, nobody needs Amazon Alexa in every room. Stop protesting: you don’t. 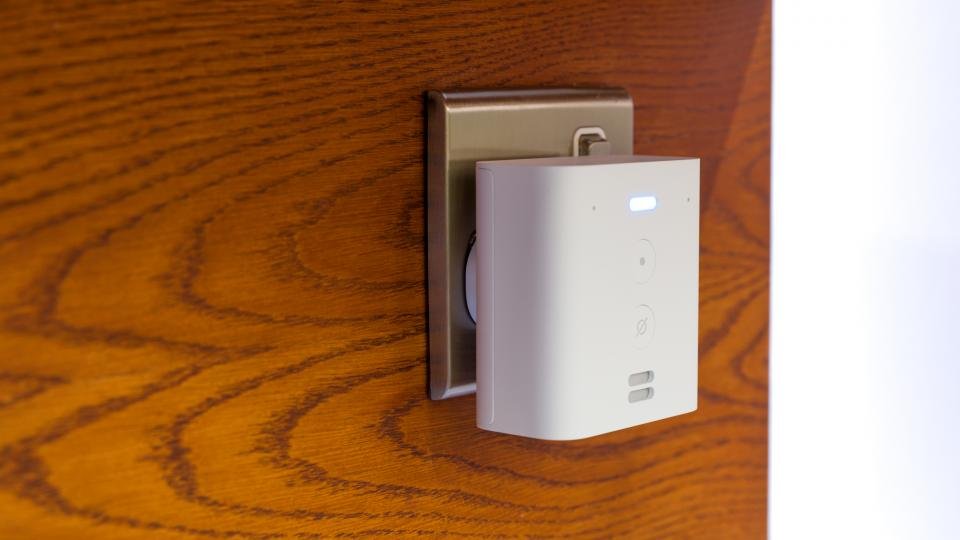 But given it outputs sound to other devices with an audio jack or via Bluetooth, you could consider this a serious rival to the Echo Dot – only one with an even more compact form factor and some nifty party tricks up its sleeves if you get the motion sensor add-on. You could plug it in by the front door and get it to welcome you home by hitting the lights and playing your favourite music, for example.
That won’t appeal to everyone but if you’re the kind of person whose mind just lit up with possibilities, then perhaps there is a market for the Echo Flex after all.