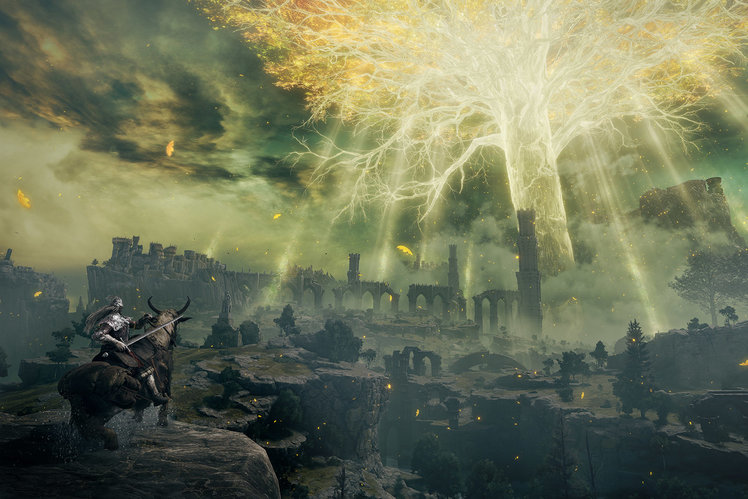 Elden Ring is a game that needs little introduction – it is the most anticipated game since CD Projekt Red’s Cyberpunk 2077, marking an evolution of legendary developer From Software’s well-worn but irresistible formula, with added (albeit subtle rather than apparently shoehorned-in) input from Game of Thrones author George RR Martin. Unlike CD Projekt Red’s dystopian role-player, however, Elden Ring lives up to the hype with casual, almost contemptuous ease.

The main reason for that is Elden Ring’s developer, From Software, quite wisely refused to stray too far from its comfort zone. Yes, the game has been described as ‘like Dark Souls meets Zelda’ by some, and you can see why, given that it has a huge open-world map, around which you can gallop on the back of a spectral steed. But such assertions are lazy: it’s a proper, challenging, fearsomely difficult, dark-in-tone Soulslike game that happens to have a few new things in common with the Zelda games.

For Elden Ring to resemble a Zelda game in any way, From Software would have had to abandon its status as a complete no-compromise merchant. Instead, the Japanese developer’s refusal to deviate from its vision of what videogames should be is, if anything, more evident in Elden Ring than ever.

Which means, for example, that you shouldn’t expect it to have anything even vaguely resembling a conventionally relayed storyline. Although George RR Martin’s involvement has brought some welcome diversity to the (still characteristically gnomic) characters, it’s the delights of this game-world which feel a little different – noticeably less Gothic and more colourful than in previous From Software games for sure. In terms of the feel of the game-world, Elden Ring takes a small step towards the likes of Skyrim, rather than Zelda, but it still eschews conventional character-driven side-missions.

Before you start playing Elden Ring, there’s plenty to do. Inveterate tinkerers will love the comprehensive character-creation system, although once you start playing the game, your efforts on that front will soon be subsumed beneath swathes of armour.

But it’s vital to choose your character class with care. Typically for a From Software game, Elden Ring gives you no advice on the matter, despite including wackily exotic classes such as Astrologer, Prisoner, Confessor, and Wretch. You have to exercise care, depending on your favoured play-style – playing as a Vagabond, for example, will mean you’re unable to wield magic properly.

Once you’re happy with your character, you’re presented, in typical fashion, with a mini-boss-battle which is near-unwinnable in your base configuration. Losing that sees you regain consciousness in a cave, where a rare cutscene informs you that although you’re a semi-undead Tarnished, you’re a chosen one who must find the pieces of the shattered Elden Ring and unite them in order to wield unimaginable power and bring order back to the land.

The cave you’re in acts as a tutorial dungeon, complete with the game’s only easy mini-boss, teaching you the basics of combat, which will be familiar to anyone who has played a previous From Software game. 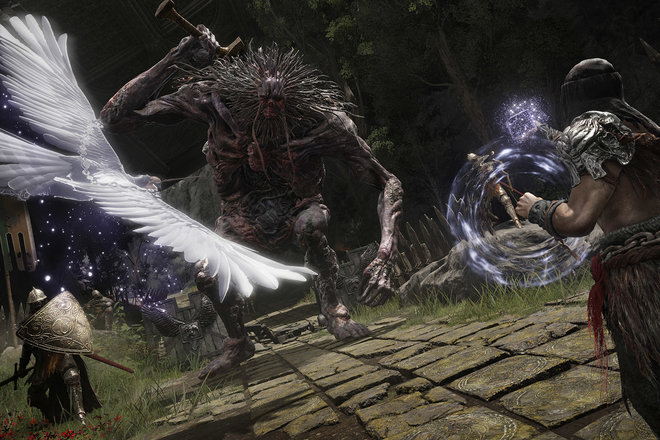 You can equip a variety of weapons in each hand and cycle between, say, swords, shields and bows in your left hand. Using the D-pad, you can move between a dizzying array of useful objects that you collect during your quests.

Once again, it’s important to pay attention to your FP (magic points) and stamina meters, while a special attack – with a long animation so it must be timed perfectly – is mapped to the left trigger. Breaking an enemy’s stance lets you launch a critical attack, plus you have a dodge-roll that’s very handy, or there’s a deeply satisfying back-stab should you sneak up directly behind an enemy.

Before long, you’ve been let loose in Limgrave which, although merely the first area of the map, is huge and absolutely stuffed with dungeons, activities, optional bosses and various types of enemies of the human, demi-human, animal and mythical varieties. Even in the gentle opening areas, you still have to be vigilant – a mini-boss on horseback roams round, for example, so you soon learn to employ stealth much more than in previous From Software games, helped by plenty of long grass in which you can hide. 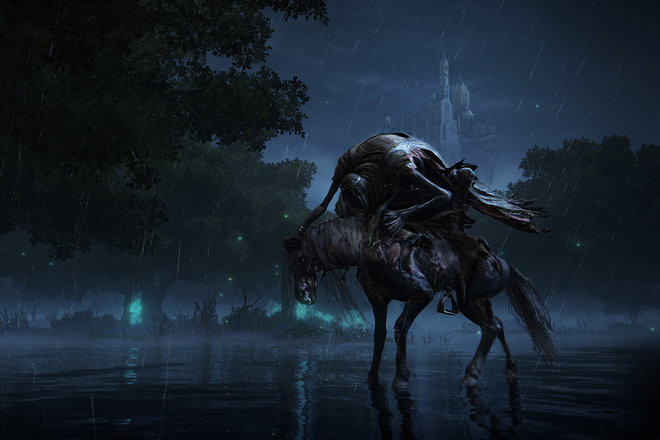 The trademark camp-fires have been renamed as Sites of Grace, and you soon start to encounter merchants and helpful characters. Make it to one particular early Site of Grace and you’re rewarded by a visit from Melina, who becomes a sort of spirit-guide and lets you summon Torrent, a Spectral Steed you can ride around the map.

Torrent is fabulous; a real game-changer in the most literal sense. You can wield weapons in either hand while riding him, too, making some enemies much easier to take on while you’re on horseback. However, once Torrent takes a certain amount of hits, he will disappear, so play caution. He also has a double-jump and can launch almost into the stratosphere at areas called Spritsprings.

A map full of delights

Torrent’s launch ability proves crucial given the brilliance of the map, which has an incredible amount of verticality. At times, you will look down on areas hundreds of feet below, which initially appear impassable, but as you get to grips with your surroundings you’ll realise that everywhere is reachable. Traversal of the map, in itself, is effectively a giant ongoing puzzle. But it’s a puzzle which constantly rewards you. 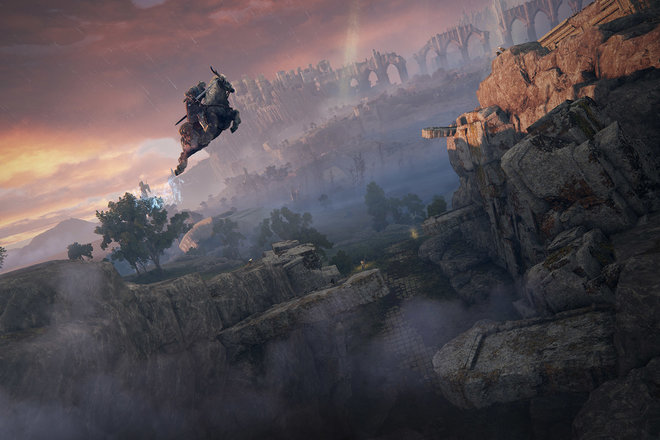 Granted mobility via Torrent, and guided by hints from characters you meet, you can swiftly reach the forbidding Stormveil Castle, where Margit, the first compulsory boss, awaits. He will, of course, batter you, even if you summon an AI-controlled ally to help.

Therefore some grinding is required: it makes sense to investigate every nook and cranny of Limgrave’s map before taking on the first boss, in order both to upgrade your attributes (you earn Runes, rather than Souls, by killing enemies this time around) and to acquire useful objects that either semi-cripple such foreboding foe or give you temporary buffs. Plus you must upgrade your basic weapon, which makes a huge difference, but requires Smithing Stones (that are, naturally, hard to come by). 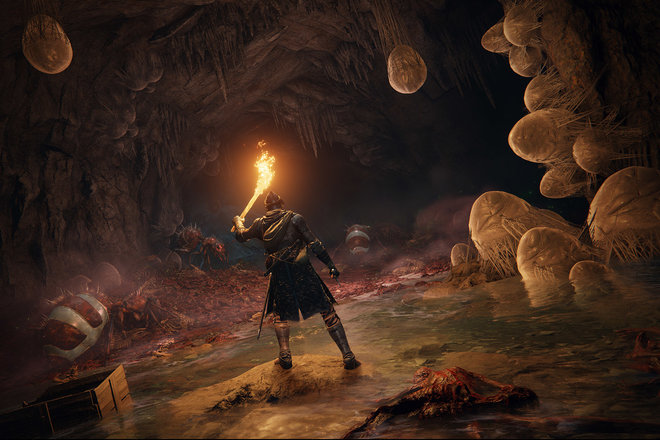 The sheer amount of fun to be had thoroughly scoping out the whole of the map is hugely enjoyable though. There are vast amounts of dungeons, all highly memorable, and encounters with mini-boss-like invaders from other worlds designed to teach you about the multiplayer system. You can invade other people’s games either to duel with or assist them, or to summon help when you need it. A weird system involving severed fingers takes care of all that, because Elden Ring has a somewhat amusing obsession with fingers.

Even in Limgrave, you encounter a fantastical menagerie of enemies – giant crabs and octopi, trolls, harpies, a mini-boss dragon, and the like. Fully exploring Limgrave alone could take you as much as 20 hours, once you factor in the inevitable frequent deaths. 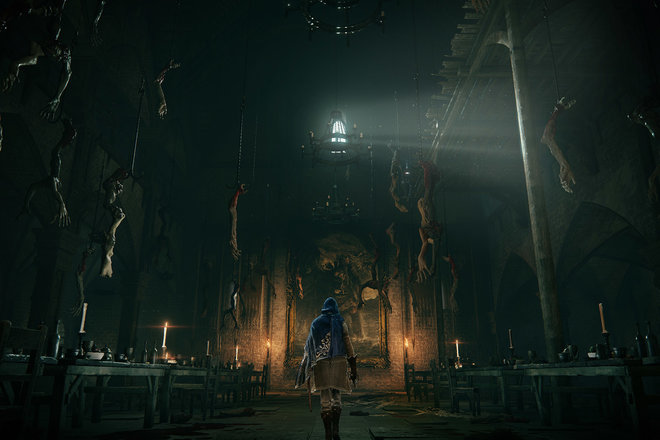 From Software has at least made a few concessions that render Elden Ring marginally less unforgiving than its predecessors. For example, you can often choose to respawn at so-called Stakes of Marika, if they happen to be closer to your lost Runes than the last Site of Grace you visited. And defeating groups of enemies partially refills your healing and FP flasks.

For those who have previously found themselves intimidated by the sheer difficulty of From Software’s games, Elden Ring is undoubtedly more forgiving than the likes of Dark Souls and Sekiro. But it still makes you work very hard indeed. Even in Limgrave, it’s easy to stumble inadvertently into high-level dungeons designed to be tackled after you’ve progressed to other areas of the game-world, which brings huge amounts of replayability to the game.

Elden Ring is a game you could easily sink more than 100 hours of your life into. That may sound scary, but in practice it won’t be long before you become obsessed with completing specific areas. Not that the game itself offers more than vague hints about the delights that stud its map – but there’s always something new to discover. 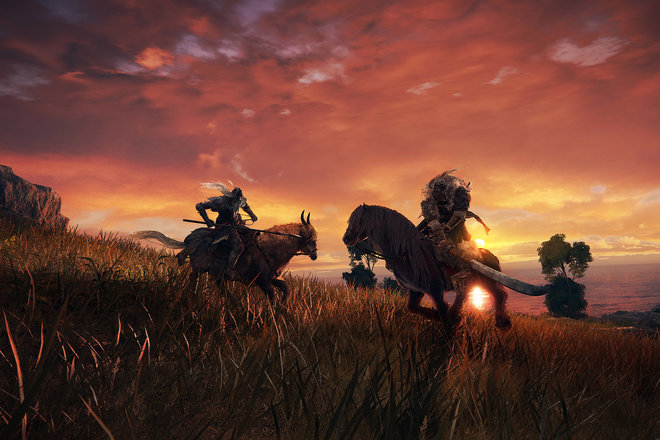 Once you move through Stormveil Castle and beyond, something resembling a proper storyline does begin to develop, and the levels of epicness are ramped up even further (perhaps offering a glimpse of George RR Martin’s otherwise largely veiled input).