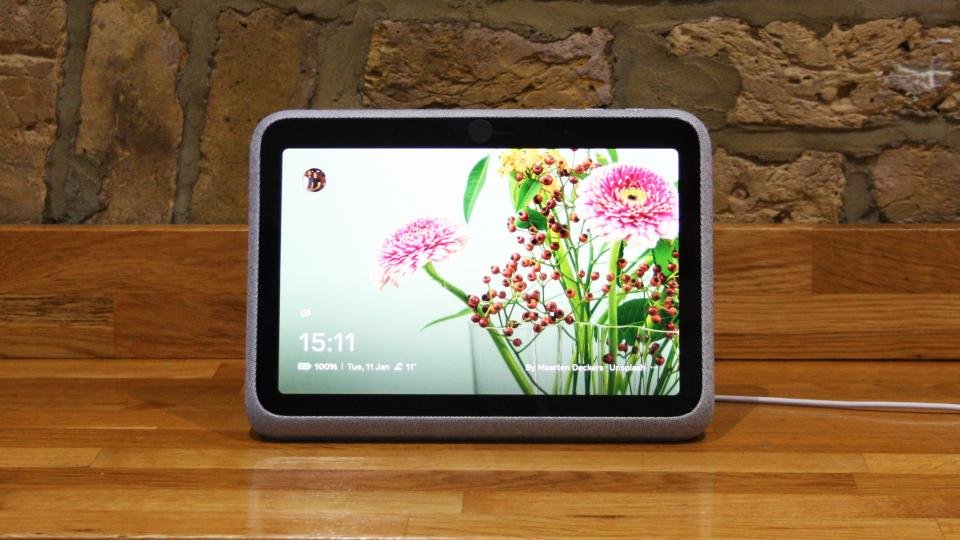 Thoughtfully designed and remarkably practical, the Portal Go is only let down by its weak selection of apps

Initially, I must admit to being sceptical about the Facebook Portal Go. This portable smart display felt unnecessary: after all, any decent smartphone can serve the same purpose, if that purpose is to give you freedom of movement while making a video call.

While it’s true a smartphone can do infinitely more than the Portal Go, though, there’s still a lot to be said for having a dedicated device for your video-calling needs, particularly one that’s as well-made as this. It isn’t perfect but, provided you don’t need much more from it than good quality video and audio for your next Zoom or FaceBook call, the Portal Go will serve you exceptionally well. 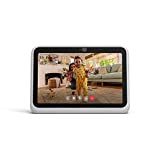 Facebook Portal Go review: What do you get for the money?

The Facebook Portal Go costs £199 (RRP). That gets you a wedge-shaped smart display with a 10.1in, 1,280 x 800 screen. The Portal Go is primarily designed for video calling via WhatsApp, Facebook Messenger, Zoom or Microsoft Teams (among others). 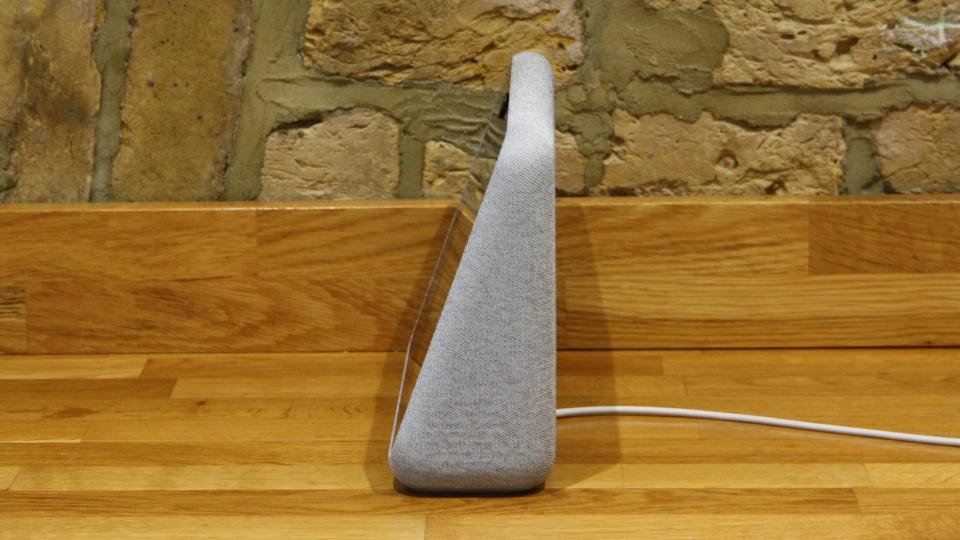 It has a small selection of other apps, such as Instagram, YouTube and Twitch, plus a built-in web browser for general web surfing and it’s controlled via the 10.1in touchscreen or by barking commands at the integrated Facebook Assistant – Facebook’s answer to Alexa. Speaking of whom: the Portal Go also has basic Alexa integration, so you can control some smart home devices using your voice.

Beneath the faux fabric exterior is a pair of 5W full-range drivers and one 20W woofer, as well as an array of four microphones to pick up your voice. A 12MP camera with a 125-degree field of view nestles within the top bezel of the display and, for peace of mind, a small camera cover sits immediately to the right of it, ready to be slid across the lens when you want to be certain you’re not being spied on. There’s also a button on the top of the Portal Go that switches the camera and mic on and off.

Adjacent to that, you’ll find the speaker volume controls. On the bottom of the device, below the power button, is a concave magnetic charging port; the charging dock itself is a small puck-shaped thing that slots into this cut out. And that’s pretty much it: the only other physical feature to note is a small carrying handle built into the rear of the device at the top. The Portal Go weighs 1.4kg and measures 173mm high, 256mm wide and 78mm deep.

The Facebook Portal Go is a lovely looking thing, particularly when compared with its full-sized sibling (the Portal), which is little more than a drab, glossy black rectangle. It’s designed, just like its contemporaries from Amazon and Google, with rounded corners and edges and it’s covered in a tasteful faux fabric. It’s light enough to carry around one-handed using the built-in handle and it feels sturdy, too. 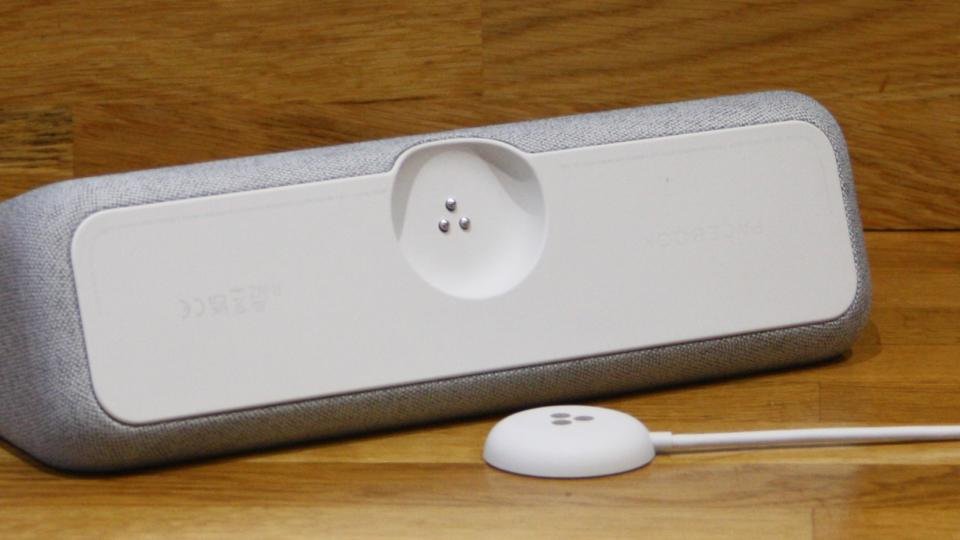 Switch it on and first impressions are good. The 10.1in display is pleasingly bright, topping out at 400 nits in our tests, which is plenty bright enough for indoor and outdoor environments if you fancy calling your mum from the garden. Content appears crisp and colourful, with no obvious over-saturation, and the pixel density is high enough at 149ppi that, at the distances you’re likely to view the screen from, you won’t see any pixelation.

The Portal Go’s 12MP camera also performs admirably, as it well should. The resolution is almost twice the megapixel count of the Google Nest Hub Max, although it falls slightly behind the 13MP camera in the Amazon Echo Show 10 (3rd generation).

Even in my dingy office, images were nice and crisp and I was enthralled by the Portal’s party trick: using digital pan and zoom, the camera can follow you around the room, cropping in and tracking you as you move around the frame. It’s a bit on the slow side but, on the whole, it’s incredibly helpful. And, since it works with groups as well as individuals, it’s great for family group calls.

Equally impressive is the quality of the Portal Go’s speakers. By the standards of smart speakers – such as the Google Nest Audio sitting on my kitchen counter – the Portal Go produces a lovely sound. Audio is crystal clear, with good instrument separation, there’s a real sense of depth and – most impressively – halfway decent bass reproduction. It goes surprisingly loud as well, too. For listening to Spotify, watching YouTube videos or taking video calls, the audio output is more than sufficient.

There are a few general quality-of-life touches I’d also like to dwell on. The first is that charging dock: it’s wonderfully intuitive and works like a charm. It also pleased me to discover that you don’t have to sign into your Facebook account to use the Go; WhatsApp is enough. As someone who rarely uses Facebook, this is a huge boon.

Then there’s the handy “Check Self-view” function. Before you make any call, you can tap a button to open your camera and make sure you’re looking presentable. It’s these touches that sell me on the premise of the Portal Go.

I’ve already alluded to the fact that the Portal Go supports a few heavy-hitting applications, such as Spotify and YouTube. Being somewhat adrift from the biggest ecosystems (Google and Amazon), however, has had an obvious impact as support from other third-party services and software is much more limited. 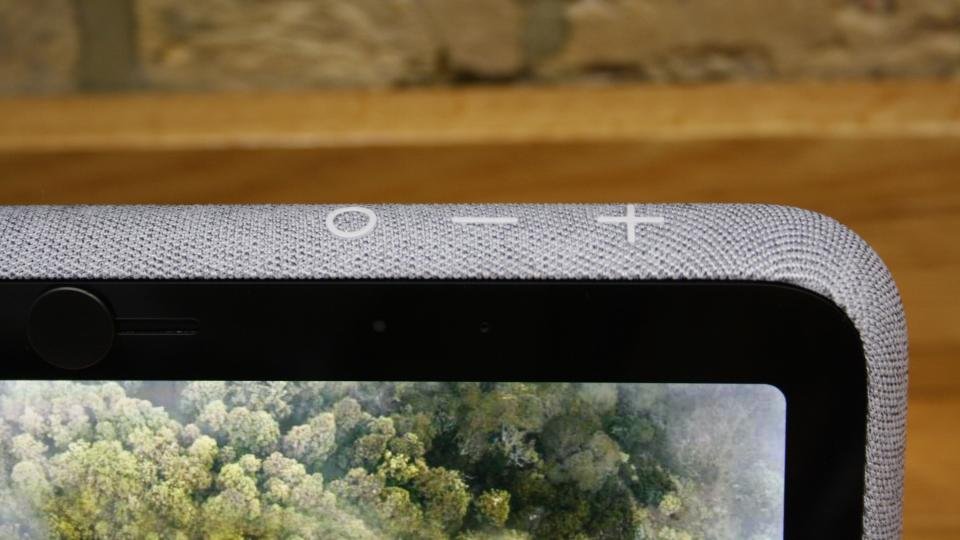 The fundamentals are there: Facebook Messenger, WhatsApp, Zoom and Teams for video calling and Instagram, Reddit and Facebook for social media browsing. It’s just hard to deny that the likes of the Google Nest Hub or Amazon Echo Show offer much, much more for your money in this department – although in fairness, these rivals don’t offer video calling via WhatsApp, Messenger or Teams.

And while Alexa integration means you can control smart home tech using your voice, compatibility is limited – you won’t be able to view real-time footage from your Ring doorbell, for example. You also can’t use Alexa to answer general knowledge questions, navigate the web browser, make calls or “drop in” to other Echo devices, although you can ask here to play music from Spotify, set reminders/alarms and give you a weather forecast.

Facebook Assistant fares better. You can use it to open apps, hear a weather forecast, play music, set timers/alarms/reminders and, of course, make video calls. The trouble is, you’re limited by the app selection. The Portal Go can play radio stations, for example, but only those operated by Planet Radio (that means no BBC, no Capital, no Classic FM, and so on). It also rather bafflingly can’t help you out with quick sums.

As I’ve mentioned, the Portal Go does have a web browser but, again, there are limitations. While you can use it to access most ordinary websites without issue, you can’t use it to stream from Disney Plus or Netflix. If it’s entertainment you’re after, you’ll have to settle for Plex. 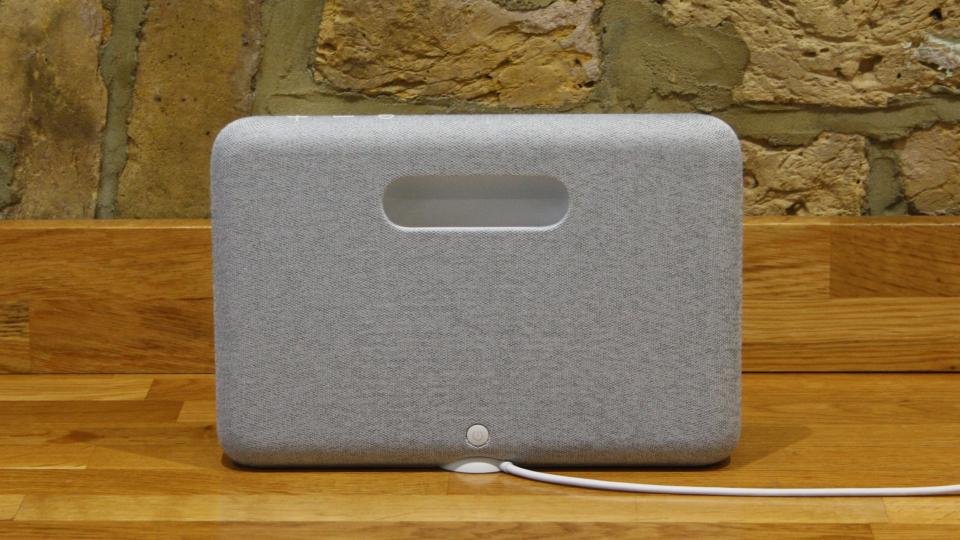 Finally, I should also point out that I wasn’t blown away by the responsiveness of the Portal Go and it’s clear the processor hiding within the synthetic fabric shell isn’t up to much. Exiting applications and opening the quick menu with a swipe up from the bottom of the screen took longer than I’d have liked.

If you’re the sort of person who often chats to their friends or family over video (as many of us are these days) the Portal Go is in my opinion the cleanest, most straightforward way to do it.

The limited app support and basic smart assistant mean it’s not much good for anything else but the stylish, portable design and excellent audio-visual quality make it an easy recommendation as a dedicated video-calling, Spotify-streaming device.

There’s just one catch: it’s quite clearly very expensive at RRP for what you’re getting. With that in mind, I’d urge you to shop around and get it at a discount if you’re interested in picking one up.