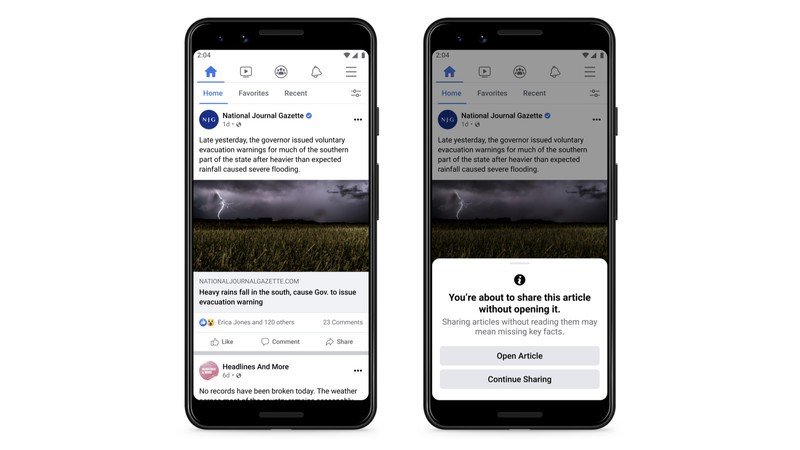 Facebook continues its crusade against the spread of misinformation by launching a new prompt to promote the “informed sharing of news articles.” The prompt will appear when a user attempts to share a news article that they haven’t read. It will provide the option to read the article or continue sharing it.

Starting today, we’re testing a way to promote more informed sharing of news articles. If you go to share a news article link you haven’t opened, we’ll show a prompt encouraging you to open it and read it, before sharing it with others. pic.twitter.com/brlMnlg6Qg

The feature is meant to address the sharing of false information, which has become a major source of distress for social media sites like Facebook and Twitter, especially throughout the COVID-19 pandemic and the 2020 election. Since news headlines can be misleading, the prompt hopes to encourage users to know exactly what it is they’re sharing and have all the facts.

Many were quick to point out that the feature is similar to one that Twitter launched last year, which warns users to first read an article before they retweet it:

Reading an article before Retweeting it? That’s growth.
Before you Retweet an article, we’ll remind you to read it first. pic.twitter.com/oVyTmSCc7O

When Android Central reached out to Twitter, it did not provide any insights on how these “read first” prompts might have helped combat misinformation since they were introduced. It did recently point out in its latest move to discourage rude tweets that when prompting users against offensive tweets, 34% of users revised their responses. It also highlighted an 11% decrease in offensive tweets after being prompted just once, showing that these types of prompts do affect user behavior online and likely prove useful when sharing news.

Facebook’s new prompt is being tested across its platform, including the best Android phones, although it may not show up for everyone immediately.