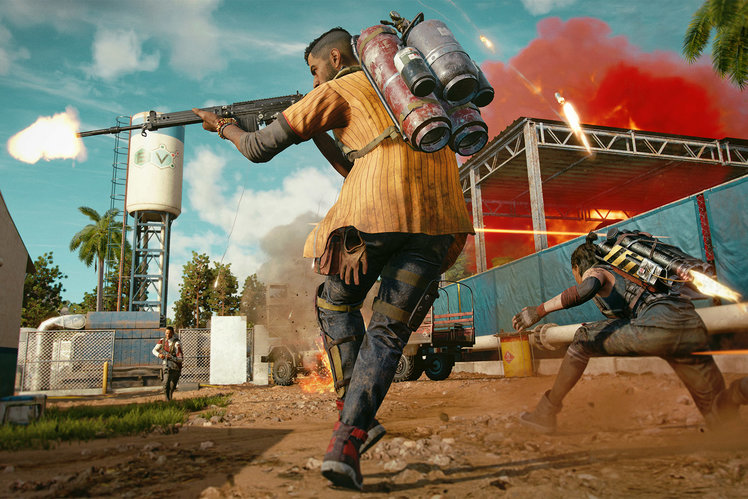 Like any new instalment of a well-regarded, long-running franchise, Far Cry 6 faces plenty of pressure to live up to its predecessors, especially given that it belongs to a franchise which is the subject more of admiration than rapturous devotion. Early indications suggest that it will manage to more than succeed, on the basis of more than four hours spent playing it.

One aspect that any Far Cry game has in its favour is the vast pool of resources that Ubisoft can throw at it, which is much in evidence in the form of a wonderfully detailed and interesting game-world, along with a stunning level of general polish.

But the real appeal of a Far Cry game lies in sharp and innovative writing – that’s what has elevated the franchise beyond the landfill of games consisting of great open-worlds populated in a dull and disappointing manner. Happily, there’s plenty of great writing even from just a small taste of Far Cry 6, with plenty of humour on show, an interesting premise, and some highly memorable characters.

Setting up a guerrilla movement

Far Cry 6 is set on the fictional island (or archipelago, to be more precise) of Yara, a tropical paradise. Or, at least, it would be were it not ruled in classic autocratic fashion by Anton Castillo, who likes to be known as El Presidente. Castillo is grooming his young son Diego to follow in his dictatorial footsteps – although, judging by a cameo appearance from Diego in the game’s intro sequence, he’s a tad reluctant to indulge his father.

Castillo – portrayed by much-loved actor Giancarlo Esposito (any Breaking Bad fans will immediately know) – presides over an island that has more than a whiff of Cuba about it, in that it appears poor and isolated from the rest of the international community. But he has one money-spinner in his favour: Yaran scientists have genetically engineered a tobacco plant, and are encouraging it to flourish with the help of a cocktail of noxious chemicals. What results is the world’s best cancer cure, called Viviro.

Far Cry 6 starts with El Presidente announcing that large swathes of the population are effectively going to be drafted as slave labour to grow his miracle product. Once you’ve decided whether you want the character you play, Dani Rojas, to be male or female, an atypical sequence ensues in Yara’s capital, in which Dani stealthily attempts to get onto a boat heading to Miami.

Dani’s plans, naturally, are thwarted, instead washing up on a neighbouring island, part of the Yaran archipelago, along with friend Lita, who doesn’t make it. Dani is on an island known as Isla Santuario, where Clara Garcia can be found, who runs Libertad, a guerrilla group of rebels looking to topple Castillo.

Naturally, Dani agrees to join Libertad – who ended up stranded on Isla Santuario after being cornered there by government forces when mounting what was supposed to be just a raid. At that point, the game starts properly, although you’ve already acquired a pistol and a grappling-hook for basic defence and traversal (which, Tomb Raider-style, features heavily in Far Cry 6).

The first story mission involves heading to a fishing village to find Juan Cortez, described as a “Spymaster” able to fashion pretty much anything into usable weaponry. Not to mention something of an old soak – he’s initially encountered hanging out in a bar. 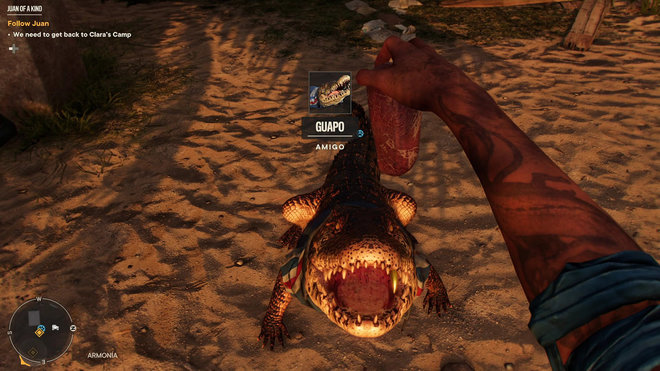 A skirmish with government troops swiftly ensues, aided enormously by Cortez’s “amigo” – the game’s name for animal companions, one of which is a cute dog called Chorizo with an ability to distract enemies, another a crocodile called Guapo. Being able to direct a crocodile to attack individual enemies is pretty sweet.

Cortez – a larger-than-life character like most of the ones in Far Cry 6 – introduces some of the game’s key concepts, such as workbenches where you can customise weaponry with suppressors, new sights, ammo designed to target flesh or penetrate armour, and so on. 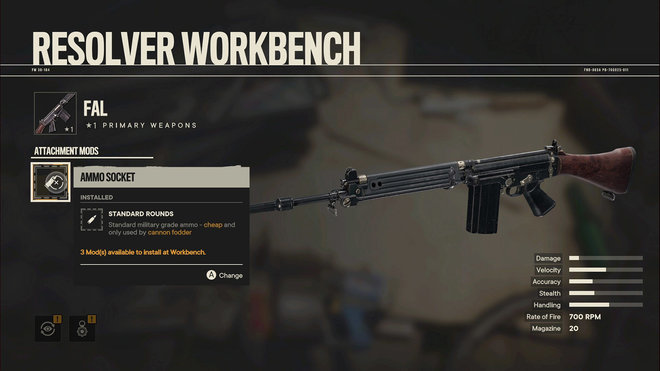 He also introduces an idea unique to Far Cry 6: so-called Resolver objects and weapons. The Resolver concept is all about cobbling together useful kit from next to nothing – scraps, gunpowder, and a product called Supremo Bond, are all Resolver resources.

Initial use of the Resolver workbench reveals much about how Far Cry 6 approaches weaponry. Having acquired two assault rifles, we were able to customise one to fire soft-target rounds and another one to fire armour-piercing rounds. The idea being that whatever challenge you encounter, you have the best weapon to deal with it.

You can also whip out your mobile phone to assess what you’re up against, tagging any visible enemies, as well as alarm systems, CCTV cameras and so on. Even from the beginning of the game, you’re given a parachute (later supplemented by a wingsuit), so finding high ground, plotting your approach, then parachuting down to ground level is a standard approach. 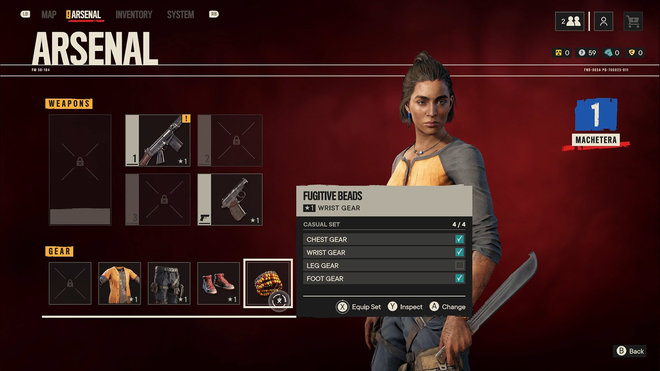 In exactly the sort of mission you’d expect to find in a Far Cry game, Cortez sends us on a fort-invasion mission to acquire the materials to make a properly fun weapon called a Supremo. We discovered it was possible to enter the fort via a smugglers’ cave and worked our way up, employing stealth as much as possible (Far Cry 6 features a great machete-takedown), seeking out the fort’s commanders as early as possible so as to disrupt the arrival of reinforcements.

You’re able to heal yourself if you take damage, as long as you have healing packs (which can often be picked up from dead enemies). The healing process is fairly lengthy and involves some amusing animations, such as snapping dislocated fingers back into place and cauterising wounds with a cigar.

After liberating the fort’s depleted uranium, Cortez was able to build us one of the game’s signature home-made weapons: the Supremo. Resembling a backpack – which can fire a fusillade of mortars when charged, by hitting both bumpers – it comes with an associated handheld weapon, in this case a flamethrower. 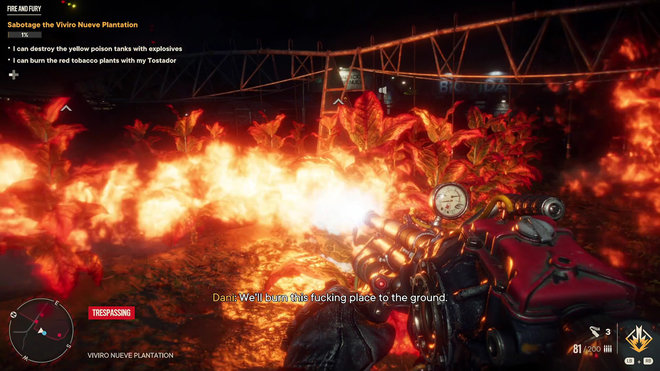 Later in the demo, we discovered that Far Cry 6 lets you build a vast array of different Supremos, with wildly varying abilities – one, for example, operates as an EMP, while another generates an area-effect healing field.

We road-tested the Supremo in a mission to destroy a Viviro-farm, which brought back memories of Far Cry 3: we had to destroy chemical tanks and burn fields of genetically enhanced tobacco plants.

After a couple more missions, such as taking over a fuel depot, we had more or less liberated Isla Santuario from El Presidente’s yoke, and it was time to head to the mainland. The demo advanced us to an area called El Este. There, we encounter an important element in Far Cry 6’s story: the so-called Legends of 67.

That refers to a previous revolutionary struggle in Yara, which presumably eventually led to Castillo seizing power. Our first task was to hook up with the Legends – in particular their main man, El Tigre. Under his instructions, we embark on an epic traversal up a mountain to the Legends’ camp at the very top. 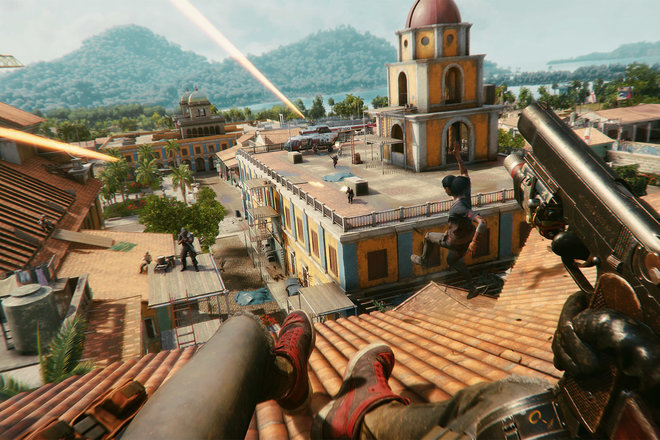 There we meet some more interesting, well-written characters, including a quartermaster who, as long as required resources are in hand, allows for new buildings in the camp to be built.

Camps prove to be more interesting to explore than we expected, and the way in which Far Cry 6 switches from a first- to a third-person viewpoint when you enter one makes great sense.

Advancing through ranks and the importance of gear

In Far Cry 6, character development is achieved through a ranking system: as you liberate more and more of Yara, your rank as a guerrilla rises, which brings perks – but also a higher level of attention from Castillo’s forces. 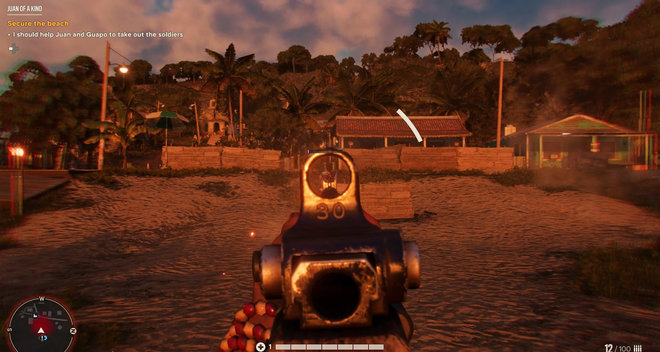 A key concept is the gear system, which has been rethought in comparison with previous iterations of the franchise. You have gear slots for just about every part of the body, which is typical enough, but each item of gear you acquire has some specific effect – such as helping you heal quicker, resistance to fire or poison gas, resistance to armour-piercing bullets and so on. Thus, you can kit yourself out for specific scenarios – such as when fire is likely to be present. We reckon it’s a pretty effective system.

When working through later El Este missions, we got a good insight into how weaponry progresses through the game, as you modify and upgrade it. The guns we were able to wield packed much more of a punch, and were much more controllable, than the ones we had early in the game, so the weaponry system also feeds into the game’s character-progression path.