Monday, 31st May is widely expected to be the launch date for the latest Nvidia GeForce RTX 30 series graphics cards, namely the GeForce RTX 3070 Ti and 3080 Ti. However, eager PC beavers will still have to wait a number of days before third party reviews come out, and yet longer until ‘retail availability’ (supposed to be the day after the reviews get the green light).

Nvidia teased its GeForce unveiling event for the first proper day of Computex 2021, and the full GeForce launch / review / availability schedule is as reproduced below.

Enough with the dates, what about performance I hear you cry. Obviously these in-between Ti cards will have performance that aligns with where they slot in the existing RTX 30 hierarchy, so we aren’t expecting any astonishing revelations. In the last few hours there have been multiple leaks regarding the upcoming new treasured from the green team including two benchmark leaks featuring the RTX 3080 Ti, even though this is the card the furthest away in terms of reviews / retail availability.

The GeForce RTX 3080 Ti has been spotted in Geekbench by Benchleaks, via VideoCardz. Its score of 238,603 is nearly 150 per cent better than the RTX 2070 in GPU Compute, notes the source. Interestingly the limited system reporting of Geekbench confirms that the GPU has 80 multiprocessors, for 10,240 CUDA cores, and ran at a max 1.67GHz. Its 12GB of GDDR6X memory was clocked at 19Gbps. 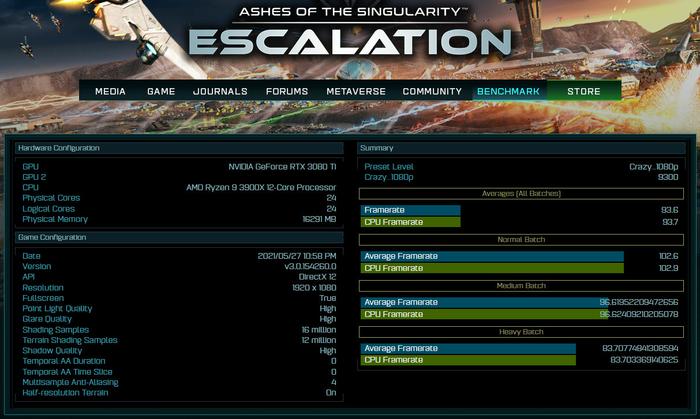 Moving along Leakbench, not Benchleaks, has spotted an Ashes of The Singularity benchmark run featuring the RTX 3080 Ti. At least this is a game, rather than Geekbench. You will note that Nvidia’s RTX 3080 Ti scores 9300 with the Crazy 1080p present here. If you are after a comparison, users with similar systems have achieved the same Crazy 1080p score using the AMD Radeon RX 6800 GPU…

Moving back the VideoCardz collected leaks and the site shares pictures of retail boxes for the MSI RTX 3070 Ti Ventus 3X OC, and the MSI GeForce RTX 3070 Ti Suprim. No surprising there. Last but not least VideoCardz claims a validation run in TechPowerUp’s GPU-Z tool confirms the specs of the GeForce RTX 3080 Ti. A Palit branded model in the database features 10,240 CUDA cores, running at up to 1,665MHz, plus 12GB of VRAM on a 384-bit bus with an effective bandwidth of 912.4GB/s. 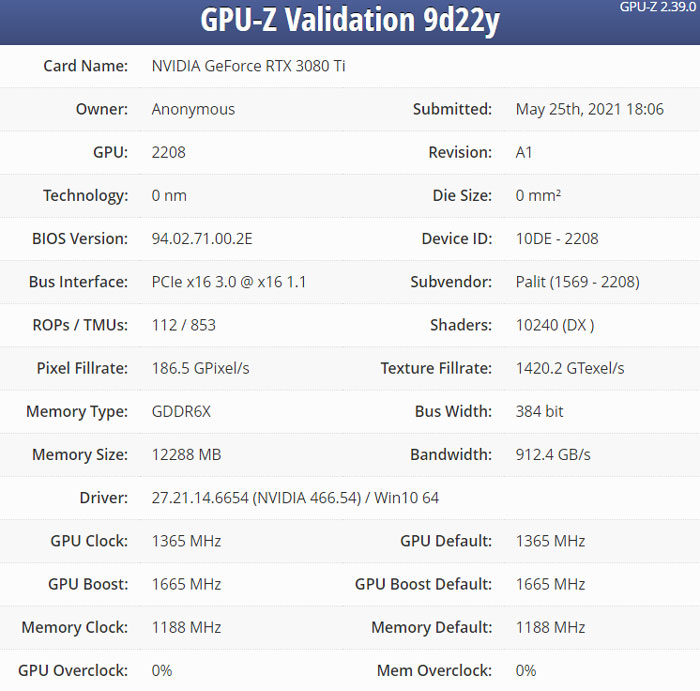 It appears that the RTX 3070 Ti is rather more shy than its big brother, from the above array of leaks. Tune in next week for the full official details from Nvidia, from the Computex event.