The Fitbit Charge 4 gains GPS, Fitbit Pay and Spotify controls and it’s a much better tracker for it

Fitbit was the first big name in activity trackers. This is the company that turned step tracking from niche pursuit into a global obsession, a metric – much-derided – that underpins the success of the fitness technology industry today. But times, they are a-changing and there are now plenty of firms producing Fitbit-style products that do a similar thing for less cash.

So why would you buy the new Fitbit Charge 4 in the face of an avalanche of cheap rivals from China? Fitbit thinks the addition of GPS and a selection of other features is enough to persuade customers away from the bargain bin. We’d have to say we agree.

Fitbit Charge 4 review: What you need to know

The Fitbit Charge 4 follows a pattern established by the company over the past few years, in that it doesn’t look all that different from the model it replaces – the Fitbit Charge 3, which launched in October 2018. When it comes to features, however, there are upgrades and they’re significant.

The big news is built-in GPS and this makes it the very first of Fitbit’s fitness bands to have the technology. The only other current Fitbit wearable with GPS is the ageing Fitbit Ionic smartwatch; neither of the firm’s more affordable Versa and Versa Lite watches has it, nor does the outgoing Fitbit Charge 3 or any of the cheaper fitness trackers.

The Fitbit Charge 4 also adds Fitbit Pay, a feature only previously available on the Fitbit Charge 3 Special Edition, comes with the ability to control Spotify playback and adds a new way to track your fitness: Active Zone Minutes, more on which below. So what else is available for the Fitbit Charge 4’s asking price of £130? Turns out there’s quite a lot. If it’s a fitness-tracking wristband with GPS you’re after, you have the Huawei Band 3 Pro or the Huawei Band 4 Pro to choose from, both at prices less than half that of the Fitbit Charge 4. Garmin’s Vivosport band (£100) is also considerably cheaper than the Charge 4, although it’s important to note that it lacks the Fitbit’s swim tracking abilities and it has a smaller, fiddlier display.

If you don’t mind considering a smartwatch as well, there are further options available to you. The ludicrously good-value Amazfit Verge and Verge Lite both have GPS and start at a price of £75; the Honor MagicWatch 2 in its 42mm guise can be had for £120. The Fitbit Charge 4, then, is at the upper end of the price scale for a product of this type.

To re-emphasise, there isn’t a huge amount new on the design front with the Fitbit Charge 4. As before, it’s a fitness band with an inline display – not quite as slimline as the Fitbit Inspire HR but certainly more svelte than the Versa 2 or the Versa Lite watches.

Indeed, the size, shape and overall design are identical to the Charge 3. The familiar curved body has a touch-sensitive display, sensors located on the rear and a capacitive “button” on the side which acts as a back/pause control. On the one hand, this is a tad boring; on the other, it means existing Charge 3 accessories and wristbands remain compatible with the new device. Plus, I think the Charge is still one of the more attractive wristband trackers out there; it’s certainly much better looking than the Garmin Vivosport.

The Charge 4 still has a monochrome OLED touchscreen, too, which is disappointing when both the Versa and Ionic have colour displays. This can be tricky to read in bright sunshine, although it’s considerably easier to view in other conditions, and to navigate, than the display on other wristbands I’ve used. The device also retains all the fitness tracking features from the Charge 3 while adding some new ones as well.

You can use it to track your heart rate, steps, calories burned, sleep and floors climbed. There’s automatic exercise detection, plus modes for running, biking, treadmill, “outdoor workout” and walking. The Fitbit Charge 4’s 50m water resistance means you can use it for swim tracking, too.

Among the new features, Fitbit has added Spotify controls (you can’t download tracks to the band itself, however) and Fitbit Pay. Previously, the latter feature was restricted to the Special Edition model. Not that this will be a big selling point in the UK since the number of banks supporting Fitbit Pay is vanishingly small compared with Google and Apple’s equivalent systems. It will monitor your blood oxygen levels as you sleep, too, and last but not least it’s also worth mentioning the fact that Fitbit is giving away 40 items of premium content in the app in support of users during the COVID-19 pandemic. These can be found under the Discover tab in the app and largely take the form of video workouts.

But Fitbit hasn’t stopped there and, in a move that is perhaps more significant than the hardware updates, it has chosen the Charge 4 to launch its new Active Zone Minutes health metric, which features alongside your step count, calories burned, distance and floors climbed counts on the Fitbit app’s main screen.

It works a little like those other metrics in that what you do tots up over time. Instead of steps, however, users are given daily and weekly targets for how long they spend in a given heart rate zone. The default is 22 minutes daily and 150 minutes weekly. Zone minutes are also rewarded differently, depending on which zone they spend those minutes in. 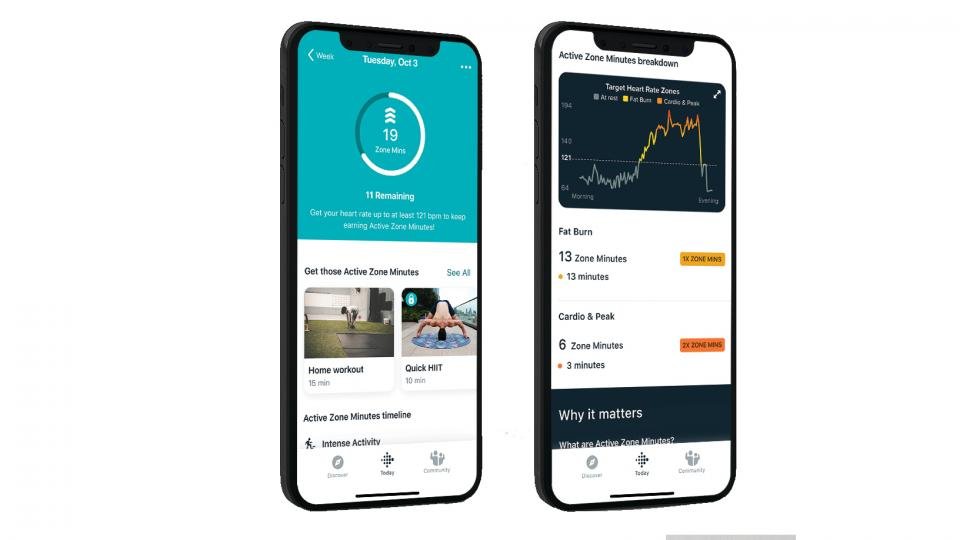 Do a mild, ten-minute workout mostly in your fat-burning heart-rate zone (zone 3, normally), for example, and you’ll earn ten Active Zone Minutes towards your daily 30-minute target; up the intensity to your cardio and peak heart rate zones (usually defined as zones four and five) and you’ll get double credit for any time spent in those zones.

Tracking your fitness using heart-rate zones is no new thing. It’s what serious athletes and fitness fanatics have been doing ever since the technology to measure heart rate became widely available. However, counting the “time in zone” towards a daily or weekly target in the same way as a step count is a new idea and looks to be quite a sensible one. It certainly makes more sense from a general fitness standpoint than the much more arbitrary step count measure.

The only things I’d be concerned about is that, first, Active Zone Minutes as a concept is a lot less simple to comprehend than a step count. And, second, that those extra time credits for activities in your cardio and peak zones might encourage people to indulge in too much high-intensity exercise at the expense of lower intensity exercise when a balance between the two is what you want to aim for.

The biggest new feature, however, is the addition of GPS so it’s worth examining how well it’s been implemented. The quick answer to this question is well enough, but it’s a long way from the best GPS tracking wearable we’ve tested here at Expert Reviews.

I used the Fitbit Charge 4 to monitor several runs and short walks over the course of five days. The one consistent thing I noticed that the track plotted on the map tended to be pretty wobbly. It didn’t hug corners particularly well and compared quite poorly with the ageing Garmin Forerunner 630 I had on my other wrist, and this, on average, led to slightly longer distances being recorded. Not by enough to be too worried about, but if you’re running longer distances of 10km plus you might want to look at something more accurate.

Here’s an example – note the top portion of the track, where the Fitbit rounds it off noticeably:

But then, this isn’t a serious running watch; it’s a fitness tracker and as long as you keep using it it will provide you with a decent gauge of how you’re doing comparatively speaking.

The heart rate monitor is more impressive. Compared with the data gleaned from the aforementioned watch with a Garmin HRM-Run chest attached, the Fitbit tracked pretty close. Again, it tended to read very slightly higher than the Garmin but not by much. Indeed, over a few runs ranging from 22 minutes to 49 minutes in length, the difference in average heart rate was around 3bpm.

As you can see from the example below, the heart-rate traces match quite closely, although oddly, on this run, the Fitbit recorded a lower average heart rate and matched the max heart rate exactly:

Finally, to battery life, which is quoted at seven days without GPS and five hours of continuous GPS use. My experience so far is that using the GPS for short bursts of activity (20 to 30 minutes) every day gives around four days of use. That’s pretty good in my book.

READ NEXT: The best fitness trackers to buy today

The Fitbit Charge 4 doesn’t look like a big update on the outside, but GPS is a welcome addition and it’s good to see Fitbit continuing to innovate with the introduction of Active Zone Minutes – an interesting new take on an existing way of tracking workout intensity over time. It’s certainly nice to be rewarded for how hard you exercise rather than just for how many steps you take or how long your workouts last.

The harder question to answer is whether the Fitbit Charge 4 is worth paying the extra for, given that other trackers are available with similar features for a lot less. I’d say it’s just about worth it, mainly because Fitbit has such a big community – and partially because the Charge 4 also throws in swim tracking alongside its other capabilities. It’s fun to be able to connect with friends for motivation as you try to keep fit.

However, if that doesn’t appeal, and all you want is for a device to tell you where you’ve been, what your heart rate was and how many steps you’ve taken, then you can get a similar feature set for a lot less money.