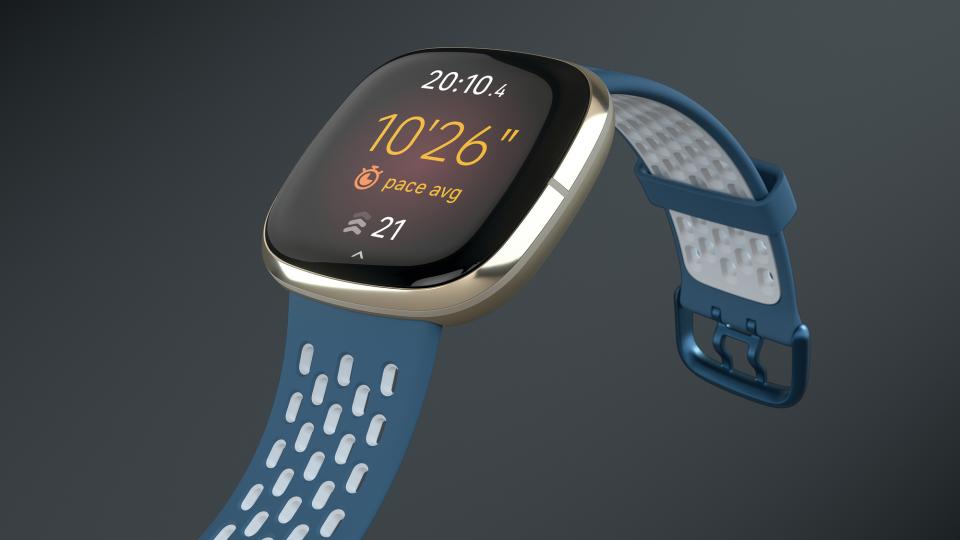 The launch of the new Fitbit sense has been a long time coming, but the wait is officially over. The newly named successor to the popular Fitbit Ionic was unveiled during a virtual launch event: this high-end smartwatch comes with a revamped design, improved sensors and a handful of new capabilities, making it a noticeable departure from its predecessor.

In design terms, the new Fitbit Sense looks like a posh Versa, complete with softly rounded corners and a much less angular look than the old Ionic. Its AMOLED screen, topped with Gorilla Glass 3, looks like it fills the front of the watch more than on the older Versa wearables, however, and looks a lot nicer as a result. It’s available in black or gold and the pressure-sensitive “button” on the side remains in place – more’s the pity.

Also unlike the Ionic, the overall focus for the Sense looks to be a departure. Instead of being primarily a fitness-based smartwatch, the Fitbit Sense is more of a “health watch” this time around. To that end, the Fitbit Sense comes with a couple of major new features that won’t help you beat your 5K personal best.

Top of the list is a new EDA (electrodermal activity) sensor. Built into the stainless steel bezel that surrounds the watch face, this measures how conductive the skin on your palm is and gives you a stress score. In effect, it’s a high-tech sweaty palm sensor: simply start the relevant app on the watch, place your palm so it covers the watch face and you’re given a score that you can track over time.

Fitbit is also following the Apple Watch in offering spot ECG readings that have the potential to spot atrial fibrillation. It works in a similar way: launch the app, hold your index finger to one corner of the watch and it’ll provide results a short while later. Just as when Apple originally launched the feature, however, it looks like this feature won’t arrive until after the launch of the Fitbit Sense. It’s currently pending FDA approval in the US and hasn’t yet been ratified by the EU either. 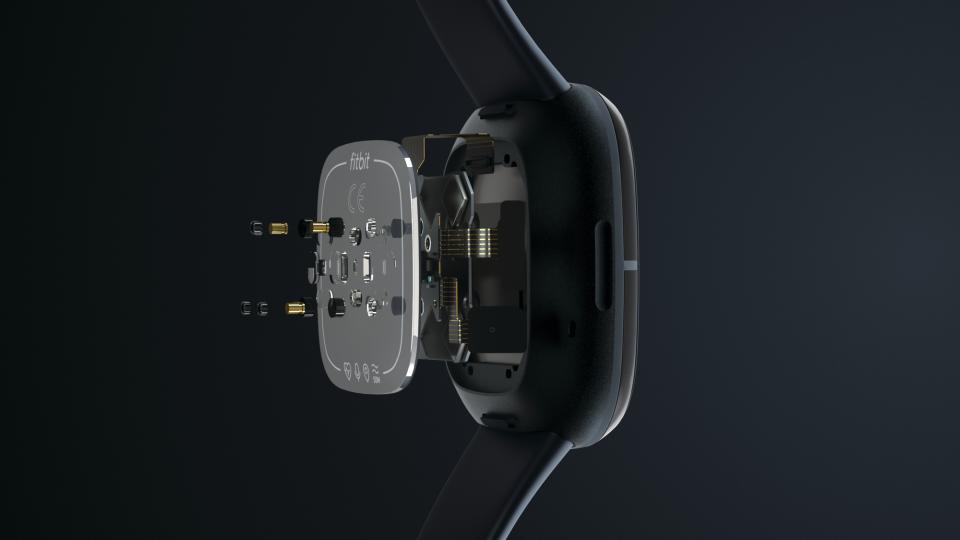 Flip the watch over and you’ll see that Fitbit has also upgraded the heart rate sensor in the Sense. This new, “multipath” heart rate sensor is, according to Fitbit, much more accurate than before especially during running. The watch can now sense your skin temperature, which is measured while you sleep.

Other new features include Google Assistant support and control, in addition to the Alexa support introduced in the Versa 2 plus the ability to take phone calls from your wrist. The latter function is marked as “coming winter 2020”, however, so that’s another feature you’ll have to wait for.

All these new features exist alongside everything you’d expect of a fitness tracker in 2020: built-in GPS, multiple sport tracking modes including swimming, six-plus days of battery life and sleep tracking via Fitbit’s Sleep Stages technology. The Fitbit Sense also comes with six months of the Fitbit Premium subscription service. It costs £300 and will be available at the end of September 2020.

Alongside the Fitbit Sense, there’s also new Fitbit Versa, the Fitbit Versa 3. The big new feature here is built-in GPS, where previous models were restricted to phone-based GPS. That means you’ll be able to go out running with it and get accurate pace and distance readings without having to strap a smartphone to your arm.

Like the Sense, the Versa also comes with Google Assistant compatibility to supplement the Alexa support already in place. It also comes with the new multipath heart rate sensor from the Sense, has fast charging and a redesigned “Infinity” wristband as well.

The Versa 3 lacks the Sense’s EDA sweaty palm sensor, ECG function and skin temperature gauge, but it will eventually gain the ability to answer phone calls via Bluetooth when Fitbit makes that feature available later in the year, thanks to the addition of a speaker. The Versa 3 will cost £200 and will be available at the end of September. 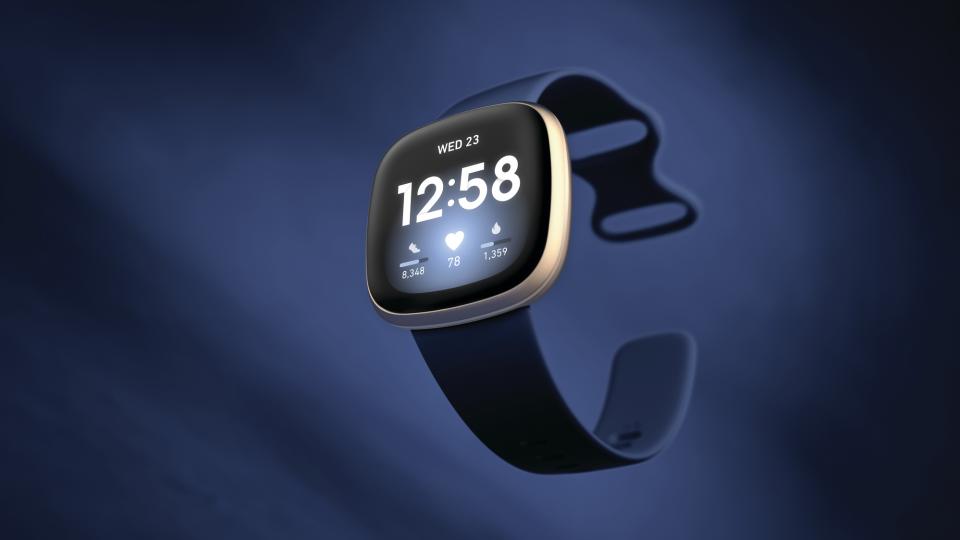 Last but by means least, Fitbit is giving its cheaper wristband-style fitness tracker, the Inspire, an update – although this is less of a dramatic overhaul.

Costing £90, the most notable upgrades for the Inspire 2 are double the battery life, with up to 10 days as opposed to the five days of the previous model, and a whole year of free Fitbit Premium. Fitbit has also added the Active Zone Minutes feature first introduced on the Fitbit Charge 4 and says the tracker has an “enhanced” design. From what I can discern, however, it looks very similar to the Fitbit Inspire HR. As with the other new products, the Inspire 2 will be available at the end of September 2020. 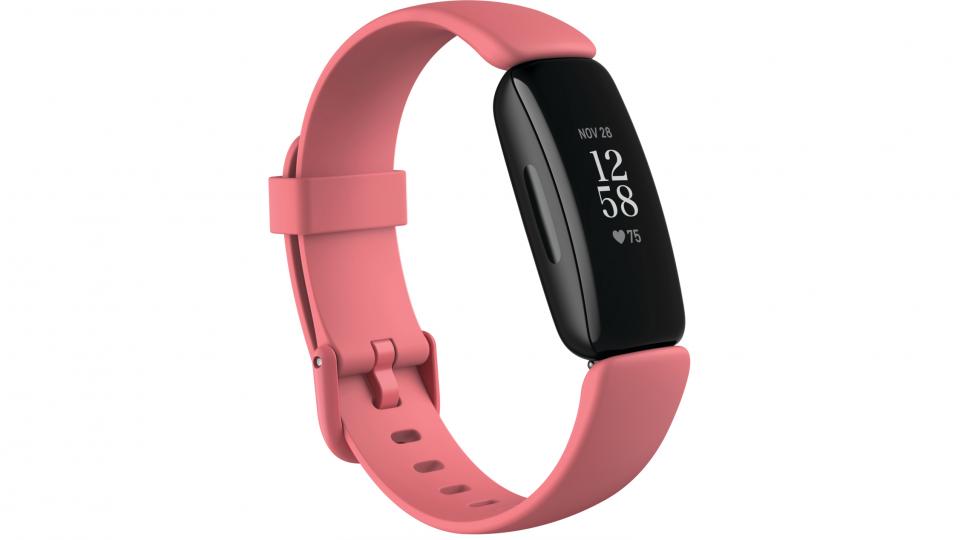