The Fitbit Versa 3 finally gives us built-in GPS, but sabotages itself with a dubious new design choice

Fitbit knows a good thing when it sees one, so it’s no surprise that the Fitbit Versa has made it to a third generation (or fourth if you include the Versa Lite). The company was struggling before it released the original Fitbit Versa, but the wearable proved so popular it actually upstaged the company’s then-flagship smartwatch, the Ionic.

This latest iteration has a big addition that every runner and cyclist has been clamouring for: built-in GPS. That makes it only the fourth Fitbit ever to include onboard location tracking, but does it make the Versa 3 the be-all and end-all of fitness trackers?

READ NEXT: What Fitbit should you buy?

Fitbit Versa 3 review: What you need to know

The Fitbit Versa 3 is the fourth incarnation of the company’s most popular wearable in years. And as you might expect, Fitbit has broadly taken an “if it ain’t broke, don’t fix it” approach: it’s visually almost identical to the previous versions, with a very similar UI and features to its predecessor.

That includes the presence of Alexa on your wrist. Trigger the Alexa app via a shortcut and you can ask your question to the virtual assistant, who will duly reply in text on the screen. Given Google is in the process of buying Fitbit at the moment, it’s no surprise that Google Assistant is also an option, but it’s not quite ready for showtime yet, with the company promising support later in the year.

There’s also improved heart-rate tracking, Active Zone minutes and, of course, built-in GPS. So improvements all round, on paper at least.

Despite the improvements, both the Fitbit Versa 3 and its predecessor still sell for the same price on the official Fitbit website: £199.99. Though, obviously, if you shop around you’ll find the Versa 2 significantly cheaper.

More reasonably, that puts the Fitbit Versa 3 up against the Garmin Forerunner 245, which regularly goes for just north of £200, and the Garmin Vivoactive 3 which routinely hits £150. Both of these are excellent watches with Garmin’s traditional laser focus on running and cycling analytics.

And if you’re an iPhone user, then the Apple Watch Series 3 now enjoys a very reasonable £200 price point too. Android smartphone owners need not apply, mind.

Before we go any further, it’s worth highlighting the key differences between the Fitbit Versa 3 and the company’s other new wearable, the Fitbit Sense. Both look identical on the wrist, yet the Sense costs £299 to the Versa 3’s £199.

Typically the top of the range Fitbit – be it 2014’s Surge or 2017’s Ionic – has set itself apart with built-in GPS, but we know the Versa 3 also has it, so what are you getting for your extra £100? Three sensors: an EDA to measure stress; an ECG to measure heart rhythm and one for skin temperature.

These undoubtedly offer additional quality-of-life measures but if all you really care about is step tracking and a way of keeping tabs on your workouts, then it’s safe to say you’re not missing out on too much. Nevertheless, if you think the Sense might be for you, then be sure to check out Jon’s full review.

I started this review by saying that Fitbit had kept the Versa design the same, and at a glance that’s true. But the company has been gradually reducing the presence of physical buttons: there were three on the first-generation device, and this was reduced to one on the Versa Lite and Versa 2. Now, there are no buttons at all: just an indent on the left-hand side which functions as a pressure-sensitive “inductive” button like the one that debuted on the Fitbit Charge 3.

Or at least it should do. I’ve found it thoroughly inconsistent to get working, and it appears that I’m not alone. It seems the most consistent way to get the button to work is to pinch the watch from both sides – and this makes it work nine times out of ten, which is an improvement. But why Fitbit felt the need to ditch a button that’s been perfectly responsive over generations of devices, I have no idea.

I should note that this is the same design as the Fitbit Sense, and my colleague, Jon, had no issues with it whatsoever, so your mileage may vary. For me, though, it’s a pain – especially when you get into the more advanced shortcuts (long press, double tap, etc.) which are supposed to make your life easier, but in my experience do the opposite.

Otherwise, in design terms it’s an absolute treat. It looks the part, with its bright 1.58in 336 x 336 display neatly enclosed in a chamfered aluminium enclosure. Yes, it still has fairly thick bezels around it, but cunningly Fitbit ensures each screen has a black background so the borders don’t really show unless you actively look for them by carefully watching the transition animations.

It’s slightly larger than the Fitbit Versa 2 (1.4in, 300 x 300) but it still feels extremely comfortable on the wrist, even if I could personally do without the strap which tucks inside itself to fasten. Fitbit does let you add in your own bands instead, but the latch mechanism is such that it’ll have to be specifically designed for the device. No doubt nice looking third-party options will spring up over time, but for now your options come direct from the Fitbit shop, with prices ranging from £25 to £50 a time.

Quirks of the capacitive button aside, the Fitbit Versa 3 is a joy to use. While you won’t find the enormous range of apps provided by the Apple Watch, the selection available by default covers 90% of what most people will want anyway, including a calendar, the weather and Spotify (or Deezer, if you insist on supporting the underdog). There’s a few choice extras on the store, too, including a Starbucks card, Uber and a Couch to 5K trainer.

What’s still a bit bare, in the UK at least, is Fitbit Pay. Yes, you can pay for things via your wrist with a contactless payment, but in all likelihood you won’t be doing that. Why? Because the list of supported banks remains absolutely dire. Unless you happen to bank with Santander, the other options are pretty niche.

Of course, most people come to Fitbit for fitness reasons, and here you’re well taken care of. Not only is the accompanying smartphone app and website very much the gold standard (chiefly because you’re bound to have friends, family and colleagues using it to compete against), but the on-app fitness and wellness options are equally solid.

There’s “Relax” for a start, which guides your breathing for intervals of up to ten minutes. You can either watch the small purple circle fill and empty to pace your breathing or, if you want to close your eyes, just feel out for the vibrations which will tell you when it’s time to breath in and out.

Then there’s Fitbit Coach. This gives you personalised, guided exercises on the wrist with neat little animated diagrams to show you what to do, and when. Sadly, most of these are gated behind Fitbit’s £7.99 per month Fitbit Premium service, but you can get a 90-day trial on the Fitbit site if you’re curious.

Then there’s the main event: the exercise app, and in a Versa first, you don’t have to rely on your phone’s GPS for location tracking. The app comes with a number of exercises to track, with everything from bootcamp and spinning to golf and tennis. But obviously it’s best for things where performance is clearly related to how quickly you move and where you travel to: running and cycling.

So how does the Versa 3 cope? Unfortunately, it’s slightly off the pace, when compared to my Garmin 245 on the other wrist, which has historically proved to be close to spot on with its GPS measurements. Over three runs between 3.5 and 5km in length, the Fitbit Versa 3 was consistently behind the Garmin in total distance covered. It’s not a huge gap, though – between 0.07km and 0.15km shy.

But – and it’s a big but – this is still a huge improvement on the Versa 2. Your phone’s GPS might be more accurate than the Versa 3’s, but in my experience, piggybacking off a phone is almost always worse thanks to aggressive battery saving measures and flakey connections. Plus, this means you can go running or cycling without having to find a pocket suitably supportive enough for your phone. It’s a big win, even if we can quibble with the accuracy.

Heart rate between the Fitbit and Garmin was actually pretty similar, though without a chest strap, it’s hard to say whether they were both bang on accurate, or well off target. All I can say is that despite Jon’s misgivings about the heart-rate monitor in the Fitbit Sense – the same tech in use here – it does perform at least as well as a wearable on the other wrist.

As ever with Fitbits, battery life is the kind of thing that Apple can only dream of. The company suggests six days for the Versa 3, and in my time with it that feels about right, even with a few GPS-tracked runs included. Do note, however, that if you choose to enable the always-on display this will drop by two thirds to around 48 hours. It’s off by default for that reason, but it’s nice to have the option.

All in all, the Fitbit Versa 3 is a big step in the right direction for the company’s most popular wearable. GPS was clearly at the top of everyone’s wish list, and while it’s not as accurate as my trusty Garmin 245, it’s still a world apart from relying on your phone. For Fitbit to add the feature without adding anything to the price tag is simply brilliant news.

It would be a wholehearted endorsement, then, if it weren’t for the company abandoning a proper, physical button in place of this pressure-sensitive alternative. Yes, it looks (slightly) nicer, but give me something that works consistently and without fuss every time. 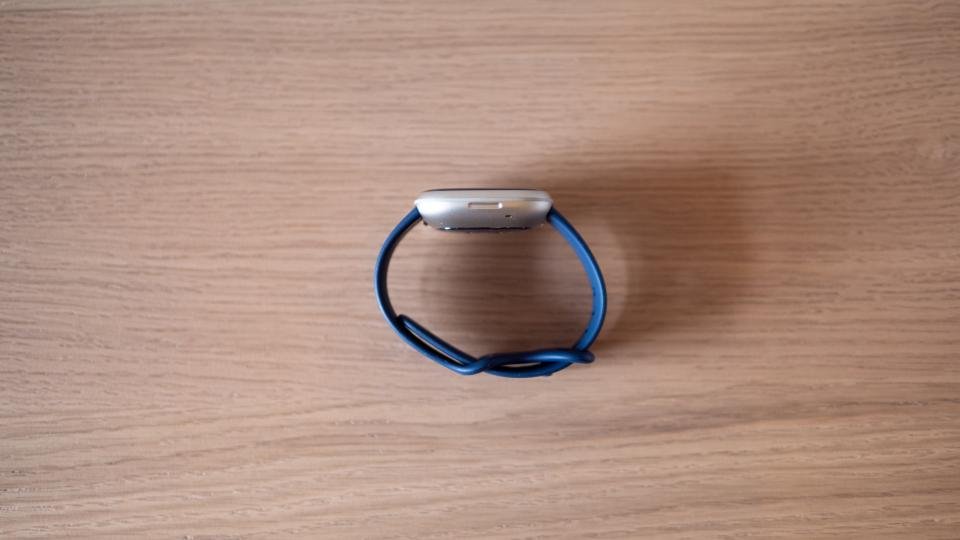 For that reason, the Fitbit Versa 3 retains the four-star rating of its predecessor. Ironically for a company known for tracking steps, this is a case of two steps forward, one step back. Fingers crossed that Fitbit makes the very easy required fix and allows the Fitbit Versa 4 to be the wearable it deserves to be.