Occasionally, on your Windows 11 or Windows 10 PC for some users, you may encounter issues like Generic PnP Monitor not detected, External monitor not detected, Stretched Screen display problem, 144Hz option not showing up in Display options. In this post, we provide the solutions to the issue where your monitor has no signal when your devices are connected via DisplayPort. 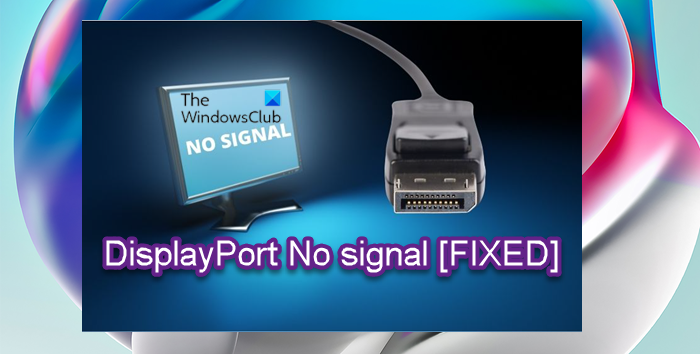 Essentially, a DisplayPort is a digital display interface primarily used to connect a video source to a display device (mostly monitors). It also carries other forms of data such as audio, USB etc. This port is widely used for connecting CPU’s to monitors for high-end graphics. For better display, PC users can connect computer to a monitor with a DisplayPort cable.

If you are faced with the DisplayPort No signal issue on your Windows 11/10 PC, you can try our recommended solutions below in no particular order and see if that helps to resolve the issue on your device.

Let’s take a look at the description of the process involved concerning each of the listed solutions.

You can begin troubleshooting to resolve the DisplayPort No signal issue on your Windows 11/10 PC by restarting and reconnecting your devices. You can restart PC with the DisplayPort cable attached and display device turned on.

Restarting and reconnecting the display device is known to have worked for some affected PC users. Simply powering off the monitor and turning it back on doesn’t fix the issue in hand because there are several capacitors that needs to be discharged completely before reconnecting your PC.

The issue should be resolved now; if not, try the next solution.

You are likely to encounter the issue in hand due to improper connection between the devices. In this case, to resolve the issue, you have to ensure that the connector has been plugged into the port correctly and is firmly attached and not wobbling or loose. You can unplug an re-plug the DisplayPort connection, and make sure to push the connector all through in such a way it doesn’t easily pull out when tugged on.

The issue in view may arise due to faulty and incompatible graphics driver on your system. To rule out this possibility, you can update your graphics adapter driver.

You can manually update drivers via Device Manager if you have already downloaded the .inf or .sys file for the driver, or update driver via Command Prompt. You can as well get the driver updates on the Optional Updates section under Windows Update or you may also download the latest version of the driver from the manufacturer’s website.

However, if the latest drivers are installed, you can rollback the driver or download and install an earlier version of the driver – in some case, this is known to resolve display issues.

If both updating and/or rolling back the driver didn’t work, you can uninstall the graphics driver using Command Prompt or use Display Driver Uninstaller. After the uninstall procedure, restart your PC – on boot, Windows will scan for hardware changes and automatically reinstall the generic driver for the graphics adapter which in some cases is sufficient enough for the display to function without issues.

4] Test connection with another cable or device

It’s likely you’re dealing with hardware or component issue. In this case, you can test your DisplayPort connection with another DisplayPort cable or even with another computer or monitor. Also, check to make sure the issue isn’t from the cable or from the ports. In addition, run the Hardware and Devices Troubleshooter and see if that helps.

If the issue is with your Windows 11/10 PC or the display device, you can have your devices repaired by a PC hardware technician, or if under warranty, you can contact the manufacturers of your devices for replacement or further assistance.

Why is DisplayPort not working?

Depending on the following scenario: if DisplayPort is not selectable, make sure the DisplayPort cable has been properly connected to both devices (PC and monitor). If the DisplayPort option is selectable but no signal appears on screen, you can unplug the cable and plug it back in and force the monitor re-detect the connection.

How do I know if my DisplayPort is active or passive?

Active DisplayPort adapters have a chip (semiconductor) to boost the performance of that device. If there is no chip, the adapter is considered passive. Basically, if the adapter includes a little box that houses the conversation chip, then it is considered active.