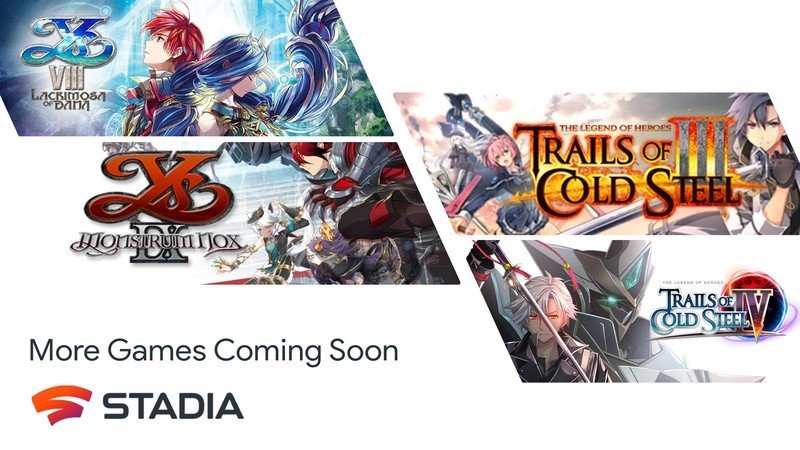 It’s good time to be a Stadia user if you’re a fan of JRPGs. Not only did we just get Dragon Quest IX last week from Square Enix, which is widely regarded as one of the best traditional-style JRPGs in recent memory, but now we’re getting four more massive, sprawling adventures from NIS America over the coming weeks that are sure to be added to many best Stadia games lists.

Both Trails of Cold Steel III (April 1) and Trails of Cold Steel IV (April 9) are releasing on Stadia very soon, which will bring the two latest entries in the long-running and critically acclaimed Legend of Heroes franchise. Naturally, you’ll probably notice that Trails of Cold Steel I and II are missing, but thankfully there is an extensive in-game library full of need-to-know information to help get you up to speed if you missed out on those earlier entries. That being said, I’d probably recommend looking up some story recaps or something on YouTube before diving in.

Ys VIII: Lacrimosa of DANA on the other hand, also releasing on April 1, is a great jumping-in point if you’re new to the Ys series. The Ys games follow Adol Christin and while not a reboot, Ys VIII is one of the most accessible entries in the series and leads directly into Ys IX. You should have enough time to get up to speed before it drops later this year on Stadia.

With these four games, plus Dragon Quest IX, in addition to the likes of Octopath Traveler, Baldur’s Gate III, and others, Stadia is slowing growing into an excellent destination for fans of RPGs and JRPGs alike.