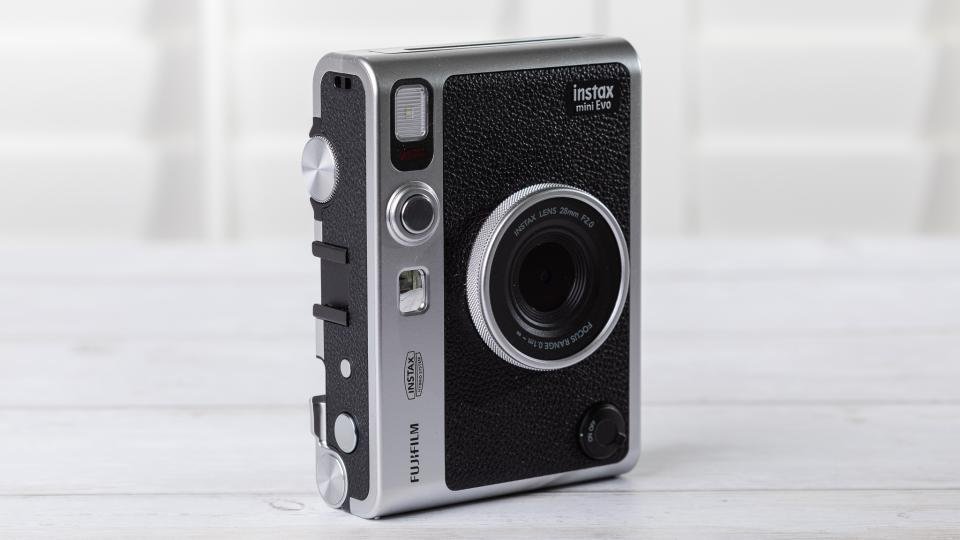 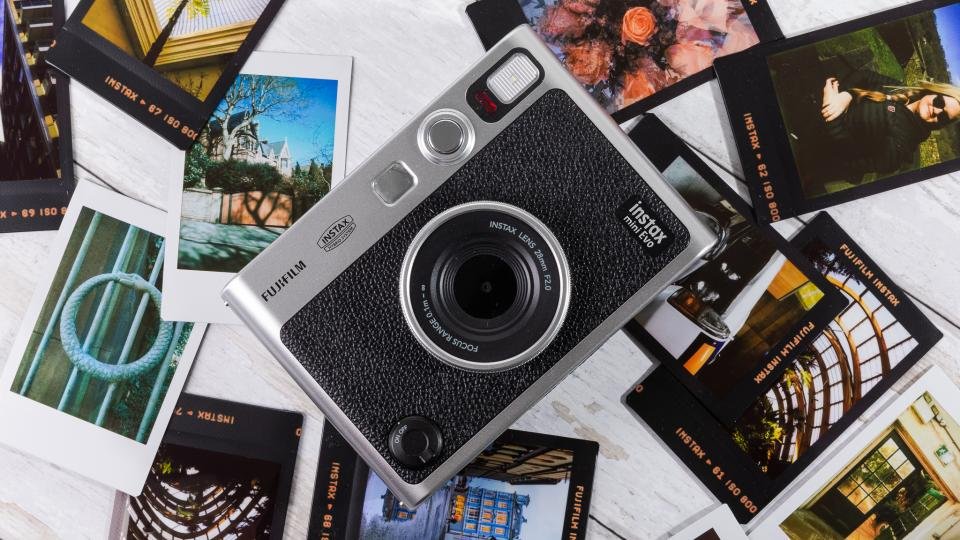 Taking inspiration from Fujifilm’s X Series of mirrorless cameras, the Instax Mini Evo blends killer old-school design aesthetics with modern digital tech. Pairing a digital sensor with an Instax printer – with plenty of creative filters thrown in for good measure – the Mini Evo aims to offer all the fun of instant photography without any of the traditional unpredictability issues.

An instant camera for the 21st century, the Mini Evo allows you to preview your shots before you take them, tweak the exposure, add filters and flash, then print and share your shots to social media. Paired with its companion app, it can even be used to print off your smartphone pictures as well.

While it may not win over analogue enthusiasts, with digital practicality and an incredibly stylish design to boot, the Instax Mini Evo may very well be one of the best instant cameras on the market today.

Fujifilm Instax Mini Evo review: What do you get for the money?

The Instax Mini Evo will set you back £174 and for that you get the camera itself, a 45cm micro-USB charging cable and an Instax neck strap. 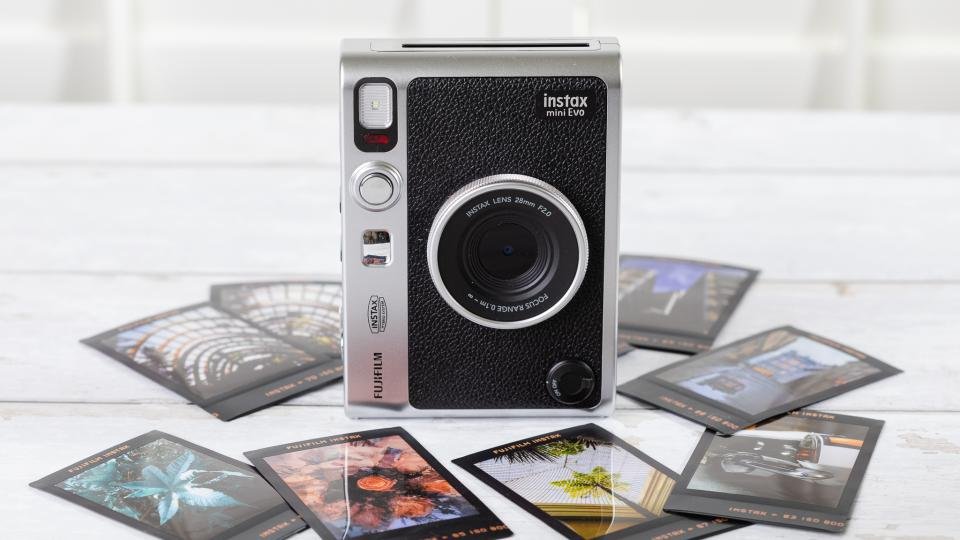 The Mini Evo is a true hybrid camera, shooting 4.9MP digital images that can be printed onto Instax Mini film, transferred to your computer or shared to social media via the Mini Evo app.

It’s fully automatic in operation and is a simple point-and-shoot affair, but it does offer the ability to tweak your exposure compensation, set your autofocus point, toggle the flash control, set a self timer and add a range of creative effects.

There are ten lens filters onboard, including double exposure, half frame and fisheye effects, along with ten film filters, ranging from monochrome and retro through to various colour-soaked styles. The lens and film filters can be paired, allowing for 100 unique effect combinations. 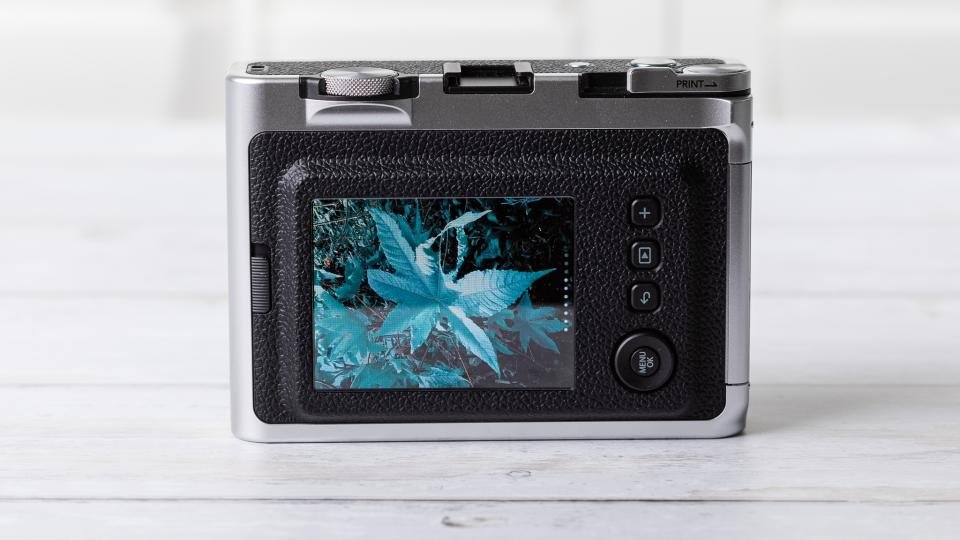 As its name suggests, the Mini Evo prints onto Fujifilm’s credit-card-sized Instax Mini film. Instax Mini is the most affordable and readily available instant film format, with a standard twin pack containing 20 shots usually retailing for around £15.

While the Mini Evo isn’t Fujifilm’s first crack at a hybrid instant camera, it is the first to lean into such an old-school design. Fujifilm’s other hybrid Mini camera, the Instax LiPlay, is slightly cheaper at £149 but has fewer physical controls, comes with fewer creative effects, lacks a tripod socket and features a more contemporary look.

Taking cues from Fujifilm’s X Series lineup of mirrorless cameras, the Mini Evo features a classic retro-inspired body with a black-on-silver finish. While it may look like leather on chrome from a distance, it’s actually formed almost entirely from plastic. However, at 285g, it still has a decent weight in the hand.

At the camera’s core sits a 1/5in 4.9MP CMOS imaging sensor that’s been paired to an f/2.0, 28mm equivalent lens. A 3in colour LCD on the rear is used for composing your shots but, as it’s not a touchscreen, a smattering of physical buttons and dials are used for tweaking settings and navigating menus. 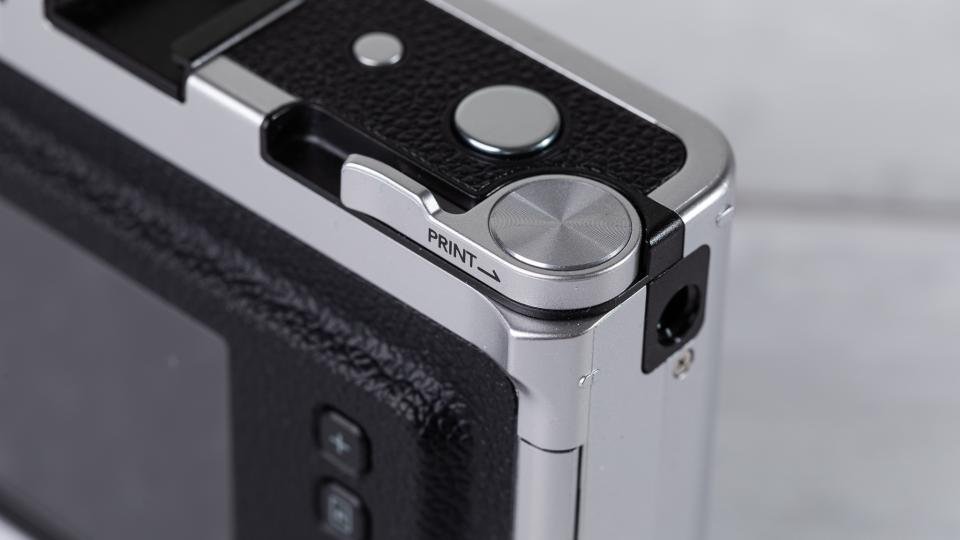 A collar around the lens switches between the various lens filters, while a knurled thumb wheel is used to cycle between film effects. There are a pair of shutter buttons – one on the front, one on the side – and these are used for both landscape and portrait shots. There’s also a throw-back film advance lever which, when cocked, initiates the film printing process.

A handy little selfie mirror can be used for easy framing while in front of the camera, and there’s a standard tripod socket built into the base should you want to step back for group shots.

Fujifilm Instax Mini Evo review: What do we like?

The Mini Evo is an incredibly enjoyable camera to use. It powers up almost instantly, offers a simple point-and-shoot interface and features a range of creative options through its various filters.

Analogue purists may baulk at its hybrid design, but it brings a host of practical benefits to the table that you simply won’t find on all-analogue alternatives. Where other instant cameras rely on a healthy dose of luck to nail your images, the Mini Evo’s LCD allows you to preview your exact exposure and composition. 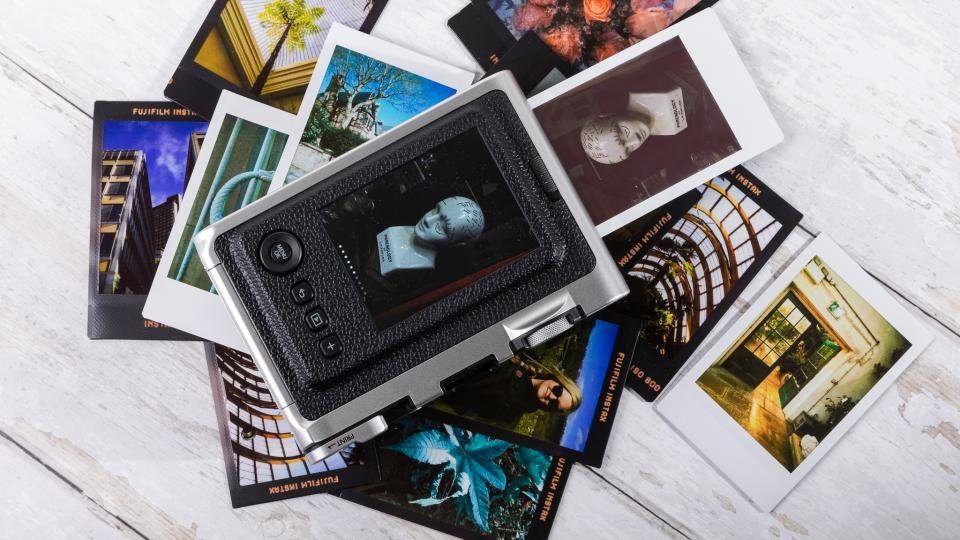 You can toggle the flash, dial in up to two stops of exposure and view the finished shot before committing to a print. Additionally, you’re able to print multiple copies of the same shot and even continue shooting should you run out of film.

While it may have a digital heart, the Mini Evo’s prints retain much of the same character you’d find with other Instax cameras. The images are rich, contrasty and, depending on your effect settings, vibrantly colourful. While the credit-card-sized Instax Mini prints aren’t the largest, they still offer a decent amount of detail and look nice when displayed. 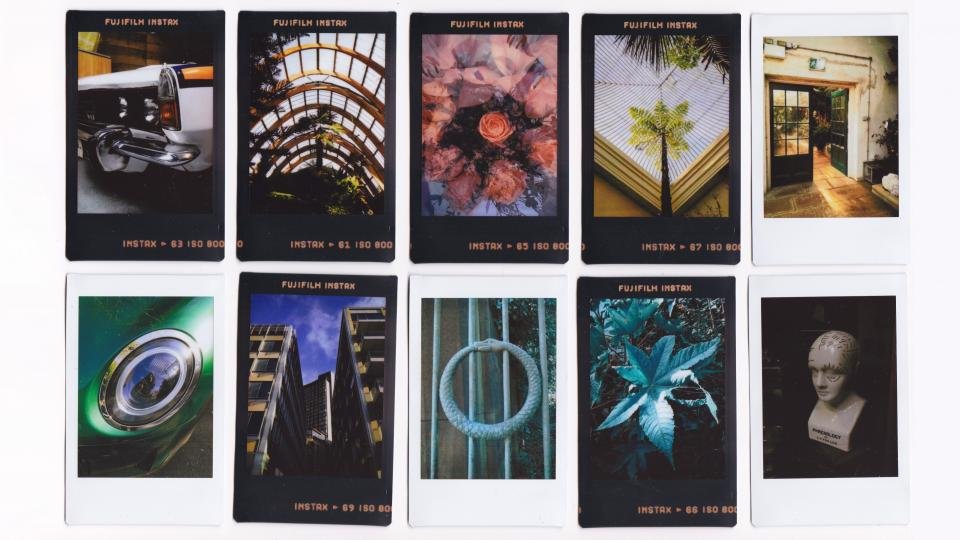 Some of the built-in effects are a little strong for my tastes, but there are plenty of options to get your creative juices flowing. I’m particularly fond of the blue filter effect, which evokes the look of old Technicolour film, and the double exposure is also lots of fun to use.

The old-school film advance lever, while perhaps a little gimmicky, is also very satisfying. Once you’re happy with your shot you simply crank the lever and watch your print emerge from the ejection slot.

Although much of my focus has been on the Evo Mini’s own camera, the ability to use the Evo to print your smartphone shots is certainly not something to be overlooked. Despite having a highly capable camera in my pocket at all times, I rarely print my smartphone images and so I had a lot of fun scrolling through my gallery and porting over pictures to print. The app pairs quickly and the smartphone printing process is very straightforward.

Fujifilm Instax Mini Evo review: How could it be better?

While the Mini Evo is an exceptionally capable instant camera, it’s a rather poor digital camera. Although, to be fair, for £174 you really shouldn’t be expecting Fujifilm X Series performance. Fujifilm’s Instax Mini Link smartphone printer retails for around £110 on its own, so expecting a killer digital camera for an additional £65 is probably rather optimistic. 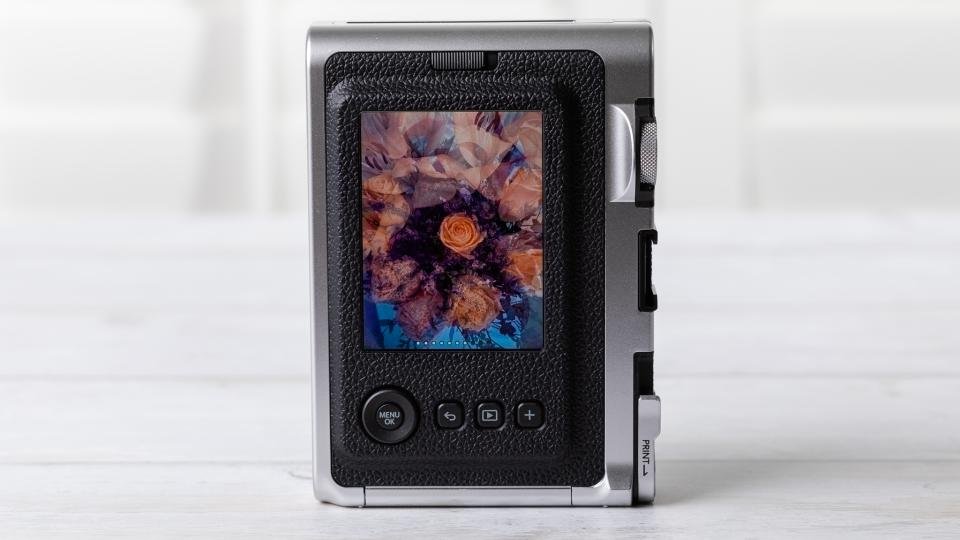 At 4.9MP, the images are fine for social media (Instagram still caps uploads to around 1.5MP) but the general image quality is rather poor. While the jpegs print nicely on Fujifilm’s rather low-detail Instax Mini film, viewed up-close on a smartphone or laptop display they look quite rough. The images are soft and in all but the best light they can get very noisy: if you’re primarily looking for a digital camera, this probably isn’t it. 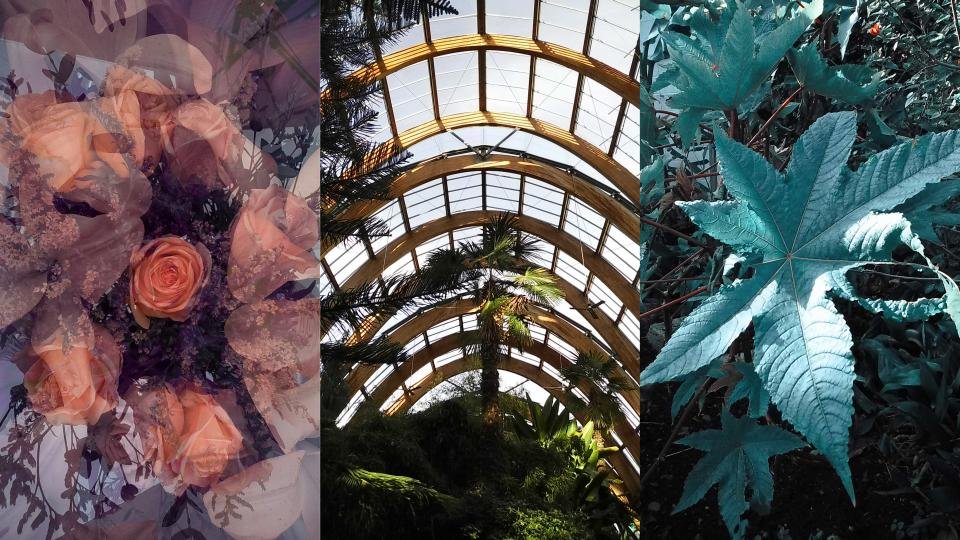 While Fujifilm’s Mini Evo app works nicely, you’re only able to share photos you’ve physically printed. If you want to quickly share snaps to social media then this can be a real annoyance, and it means the only way to get non-printed images off the camera is via the microSD card. I can’t think of any good reason for this handicap other than Fujifilm looking to ensure continued film sales.

Finally, in a more minor criticism, Fujifilm’s choice to opt for micro-USB over USB-C for charging does feel a little antiquated.

Fujifilm Instax Mini Evo review: Should you buy it?

It may not win over analogue diehards, but with an LCD display for previewing your images, powerful exposure compensation and a wealth of creative effects, the Mini Evo is one of the most versatile instant cameras on the market. Tack on the ability to print photos straight from your smartphone and the Evo is a very attractive photography gadget.

It’s not without its limitations: it’s unapologetically an instant camera first so if you primarily want to shoot digital images, you’ll be better served by your smartphone. Fujifilm’s decision to limit the app’s shareable images to those you’ve physically printed is also a real annoyance.

Overall, the Mini Evo has plenty to offer, and while I’ll keep my fingers crossed for an Instax Square format model in the future, the Evo has jumped straight to the top of my list of favourite instant cameras.