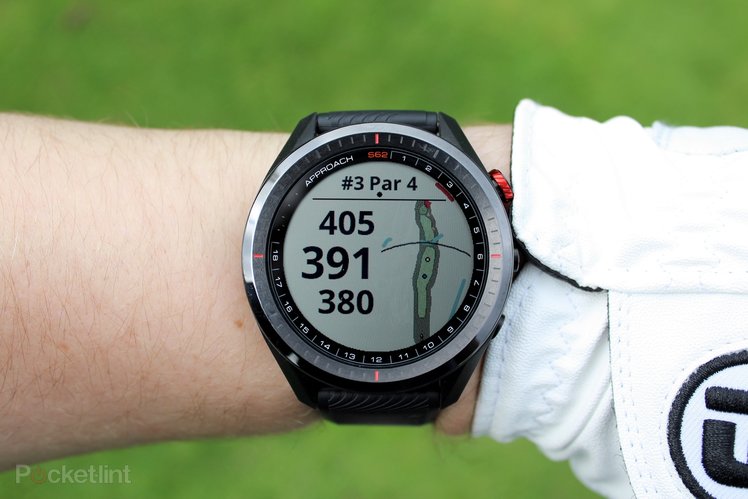 Using a GPS golf watch out on the course may have become fairly commonplace over the past decade or so, but it’s not often that these dedicated devices translate well to everyday use. Either the look is out of place in non-golfing conditions, or the feature set is too limited to warrant a full-time place on your wrist.

Garmin’s Approach S62, however, aims to provide a more rounded experience, while also providing premium tracking features for all levels of golfers. But does it manage to blur the lines convincingly, or are you better served by keeping your golf tech separate from your everyday life?

Like any kind of GPS sports watch, the Approach S62, above all, needs to remain functional in use. With a comfortable rubber strap and a fairly reasonable weight, it’s able to achieve this. Since it’s been strapped to our wrist we’ve never felt hampered during any kind of activity, including golf. 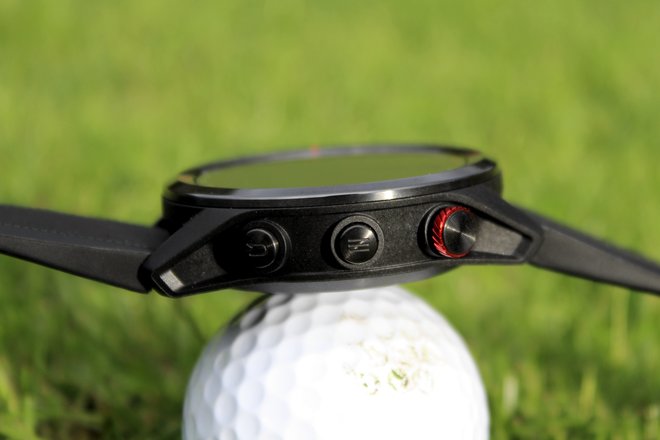 The 47mm case – the only available size option – is definitely teetering on the large side, but, aside from during sleep, we personally don’t find it too much of an issue. We suspect, however, that not everybody interested in this watch would feel the same. Those with smaller wrists who don’t enjoy anything too overbearing are likely better served, at least from a comfort perspective, with the mid-range Approach S42 and its 43mm case.

It’s not just about comfort, of course. That bigger case size also results in a bigger screen, and given that you’ll likely be spending plenty of time interacting with it, there’s a very good reason to want that to be as big as possible.

After being spoiled by vibrant and rich smartwatch displays for years, we found the S62’s 1.3-inch colour screen a fairly standard affair, though. It’s not going to blow you away, but at the same time it’s also not something to put you off. You’re still able to see the maps and menus clearly in harsh sunlight, with a backlight and brightness sliders also at your disposal.

On the case’s right-hand side, there are three buttons: the red pusher is a shortcut to begin an activity; the middle one sends you to a simplified menu; and the bottom one is simply used to go back. These are fine, working similarly to most Garmin models. With the S62’s display also being a touchscreen, though, it can be a little confusing to get used to the controls. 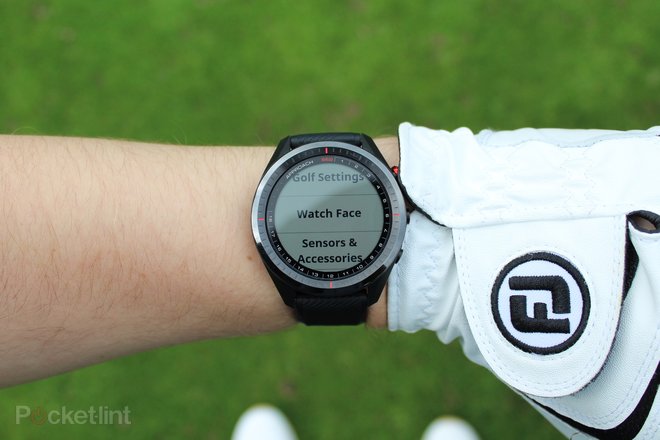 For example, it took us a day or two of use to figure out a swipe up or down from the home screen brings up your daily stats. Around the edge of the display, you’ll also spot 1-18 stamps – as you’ve probably guessed from the number, you can actually use this as a gauge for holes on the course.

Being that it’s a golf watch, the S62, naturally, shines in this regard. All the usual tricks are here when you’re out on a round – distances to the front, middle and back of the green, with any hazards or lay-up positions also marked out and easy to view.

We’ve found the Green View feature – which shows you the actual shape of the putting surface – very handy when playing on courses for the first time. 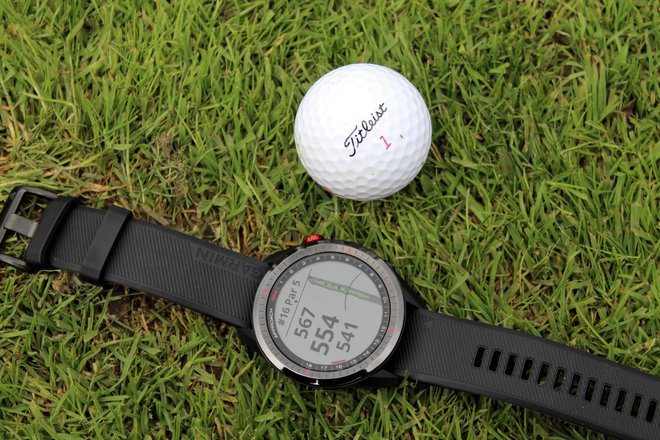 As with any app or golf watch, you’re likely to use the watch to score as you go, with the data regarding fairways hit, GIR and putting all automatically fed back to Garmin Golf once the round is synced. It takes a bit of getting used to, and it can definitely be hard to keep up with each hole when you’re playing with others, but Garmin does make it easy to go back and edit your data.

For the first few rounds, it’s very much a case of religiously logging everything you can in order to build up an initial picture of your golf game. We found this period a little tedious, but it’s also a good way to get used to new bits of information and really figure out what you have the capacity to take in when playing.

After five rounds, you begin to reap the rewards. The S62’s Virtual Caddy is unlocked, providing you with advice on club selection that’s based on your shot data and Garmin’s PlaysLike Distance, which uses wind speed, direction and ground elevation to factor into the advice.

It’s a really great idea, and if you’ve been disciplined with your data input – and we must stress that this is a real challenge – there’s no doubt the numbers stack up.

At least in our case, though, it wasn’t a game-changer. Unless you’re consistently playing new courses and therefore don’t have the best feel for each hole, or are playing in tournaments and want a second opinion when in-between clubs, we think that you can almost always arrive at the same destination using gut feel. 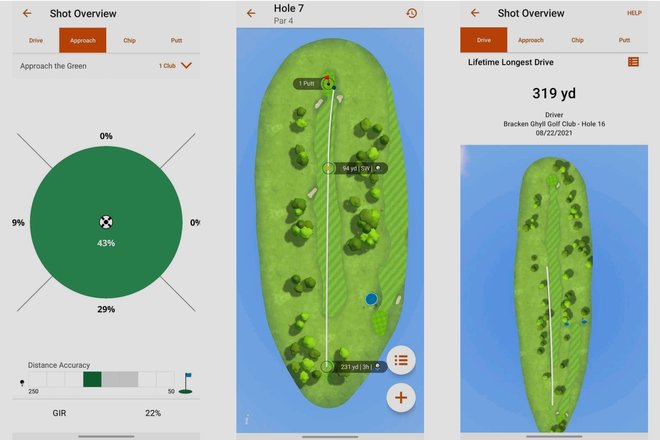 Like all of these features, it really is a case of seeing whether you can incorporate them into your routine. For us, a lot of these features slow up our play, make us second-guess and draw us away from the experience. For others, we’re sure something like Virtual Caddy would be a huge selling point.

Our favourite aspect of the tracking, really, is playing around in Garmin Golf – especially once we’d synced up the Garmin CT10 club sensors. Again, it requires plenty of rounds and input, but these sensors, combined with the watch, helps to give you some actionable insights that only get better over time.

For example, it helped us focus more on Strokes Gained in our chipping, which we realised we often under-hit. Our advice would be to think about picking up a few of these sensors (perhaps in the bundle with the watch) and placing them on your most-used clubs, since they can really help automate some of the manual logging.

With plenty of the golf features available on other Garmin devices, the off-course features, much like the overall design, are definitely something to consider with the S62. As you would expect for the watch’s asking price, this is much more than just a basic tracker. Garmin has done a nice job of adding in the appropriate features from its wide-ranging line-up.

While it’s not the most ideal watch to take on a four-hour hike, use to track strength sessions or register nightly sleep, we found it very capable when we did, thanks to Garmin’s Elevate heart rate monitor (which is about as accurate as optical monitors can achieve) and the built-in GPS tracking.

With the added benefit of a Pulse Ox sensor – which monitors blood oxygen saturation during the day (and can also be turned on for sleep) – Garmin Pay and notification support, it becomes a pretty fleshed out experience. 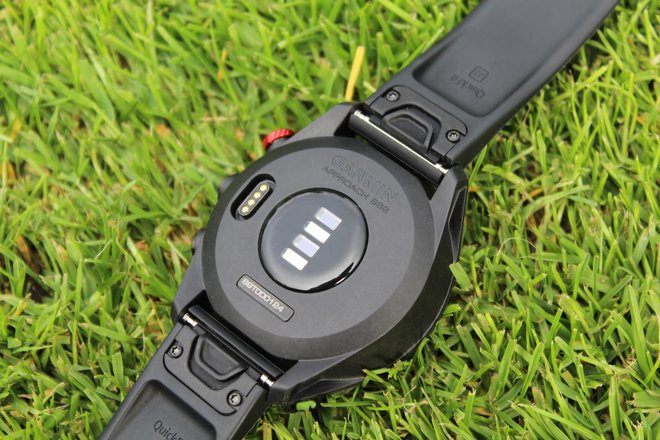 There’s also support for Garmin Connect IQ, which allows you to tap into third-party apps for mapping and detailed battery info, while the usual delights of Garmin Connect had us poring over our tracked data.

We can’t fault the way data is presented in the app – or what the S62 is actually offering – but Garmin’s sleep tracking inconsistencies do mean that the company’s Body Battery and Stress metrics are often thrown off course, which is a bit of a shame. We can live with the odd discrepancy within sleep stages, but the S62’s inability to log accurate deep sleep numbers when compared to our Google Nest Hub, Whoop Strap 4.0 or Fitbit Versa 2 was just a little odd.

We don’t suspect this will be a deal-breaker for most looking at the S62, but it’s something to keep in mind. For the most part, it borrows a healthy amount of features from Garmin’s smartwatches and other dedicated trackers, and this helps round out what’s a very good golfing watch.

For the most part, the S62’s battery life is pretty respectable. Last summer during testing we were taking it out on a couple of GPS-tracked, three-hour rounds in the week, as well as three or four gym sessions. With that, as well as some moderately tweaked settings (backlight on when our wrist was raised, for example), it would usually last around a week or so.

When we’re playing less golf in the winter months, it naturally lasts a bit longer – even if we’re using it to track hikes and walks with GPS. 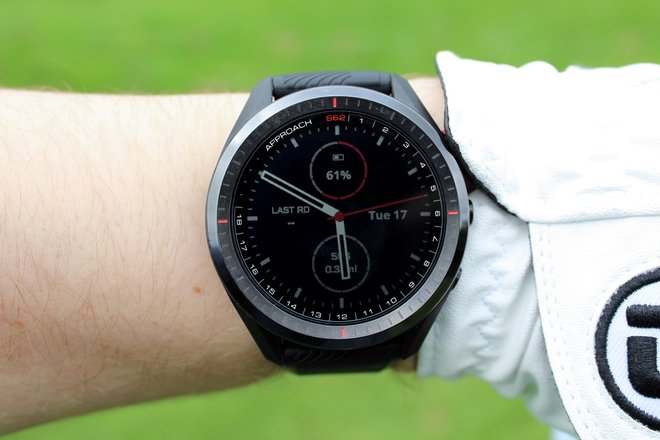 The biggest issue we’ve found with the battery is the Pulse Ox feature, which, as we learned, is turned off by default for a pretty good reason: if this is on 24/7, the battery life comes down to around three or four days maximum in our experience. Having the screen brightness high, as well as other settings turned on, will also mean that this drains even quicker.

This isn’t a huge deal for us overall, but we’d advise taking the 14-day estimation with a pinch of salt. We’d guess the average user will use the S62 anywhere from five to 10 days before needing to throw it back on the charger.