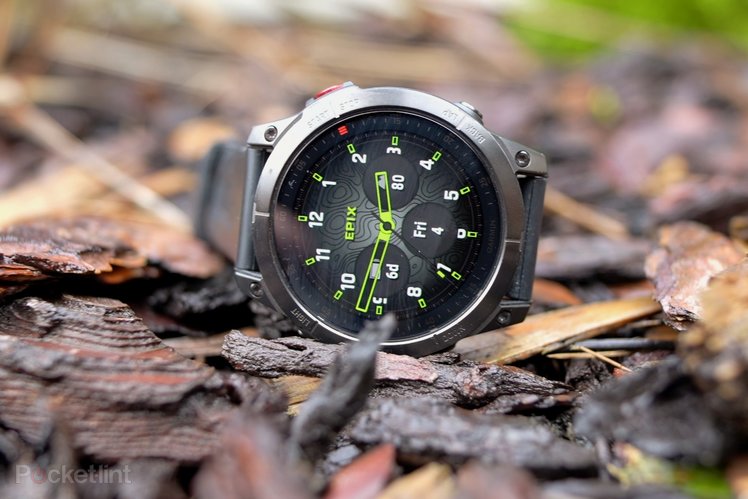 For years, Garmin watches have been synonymous with transflective MIP (Memory in Pixel) displays. These certainly aren’t the most exciting type of display to look at, but they do have some key strengths. They allow you to view things easily in daylight, can remain always-on and are also very battery efficient.

Hardcore athletes looking for a long-lasting fitness tracking companion, then, have always been well catered for with this practical display.

Recently, though, Garmin has started adding AMOLED displays to its lineup of more premium sports watches. What started with the Venu 2 has now moved onto the latest Epix, the Gen 2 model.

This is what Garmin bills as its most premium smartwatch. In reality, though, with the top-end, multisport-focused Fenix 7 now also offering touchscreen capabilities, the key selling point for the Epix 2 is the AMOLED display.

But does this bump up in screen quality enhance the experience, or does it actually prove a hindrance? And, ultimately, who is the Epix 2 for? We’ve been testing it to find out.

It’s no exaggeration to say the newest Epix is pretty much a direct copy of the Fenix 7 we just mentioned. Garmin has used the same case design, materials and button layout as its flagship range. That is if we’re speaking about the regular Fenix 7. Unlike its sibling, the Epix doesn’t come in different sizes. It’s 47mm, and that’s it.

There’s no wide range of colours and finishes, either. You can get it in four different combinations, but only three metal finishes. You get a silver/slate coloured steel model, and the other three come with titanium casing; either in dark grey or silver. The most expensive models also come with Sapphire crystal glass on the front, with the top tier SKU shipping with a thick brown leather strap.

Just like the Fenix, it’s equipped with a 22mm Quick Fit strap, which makes it really simple to just unclip it and clip on a replacement whenever you fancy a change. The downside is that it’s a proprietary mechanism, and Garmin’s own brand straps are pretty expensive for what they are. Plus, with Garmin not being as mainstream as Apple Watch, there aren’t that many third parties making cheaper alternatives.

It’s a rugged-looking watch – as you’d expect – and it’s built to survive the elements. Especially the Sapphire models, which have that more durable and scratch-resistant lens over the screen. With 100m waterproofing and military standard resistance against shock and temperature, it can really take a beating. 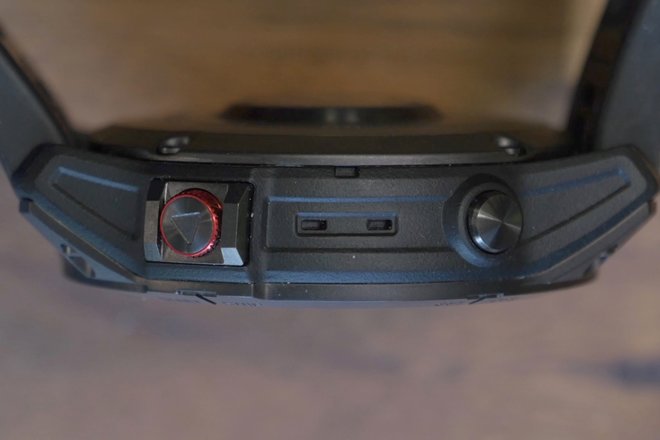 None of this is new or unique to the Epix, but that’s not really the point. If you wanted a watch from Garmin with a bright, colourful AMOLED display in the past, that meant sacrificing durability. With the new Epix, you no longer have to.

The screen is the one single element of the Epix experience that makes it different to the Fenix 7. We knew that before we even got our hands on it. Perhaps what surprised us was exactly how different that display would make things, in more ways than one.

Being an AMOLED panel, of course, means it’s much brighter than the traditional Garmin MIP displays. It’s more colour rich and has much higher contrast, and that makes everything much easier to see. At least, when there’s no bright daylight shining on it. 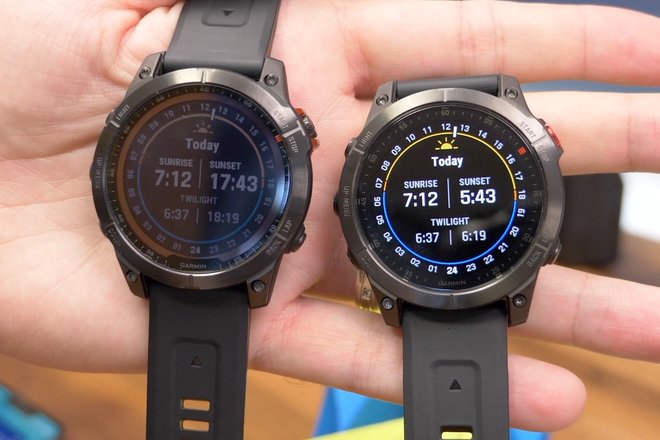 That’s not just a nice-to-have feature, that makes a real difference every day. When you’re checking the time, you see it clearer, and it’s even more noticeable during activities. The vivid, brighter panel makes text, colours and data more easily visible. You can see the clear difference between the Epix and Fenix 7 in the image directly above.

It’s a sharper panel than the transflective MIP displays, too. It’s 416 x 416 pixels, which is significantly more than the 260 x 260 on the Fenix. Fine lines and text look sharp, and no longer has that slightly rough look to them.

More crucially, though, is that’s enabled Garmin to add even better maps to the watch for navigation. Rather than quite a simple map graphic, the maps on the Epix are rich with texture, colour, small paths and other details that are mostly missing from the Fenix. 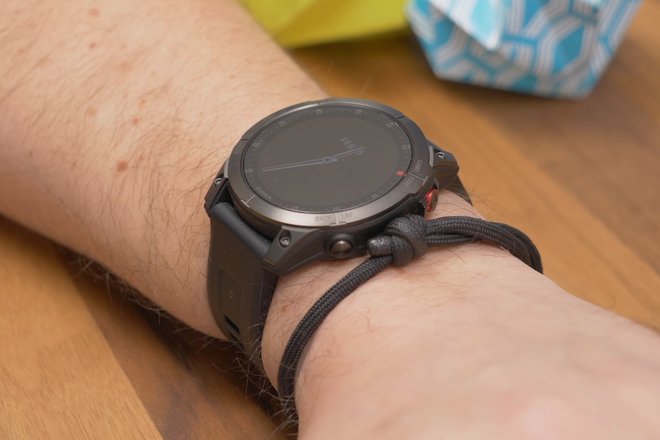 The only downside to the AMOLED is that, in order to conserve energy, it can’t be properly on all the time. That said, it does have an ‘always-on’ mode activated by default, which dims the backlight and watch face significantly, and also reduces the seconds-hand animations. This means you can see the time all of the time, and it’s relatively easy to see. However, with always-on enabled, the battery life is affected. It’s the difference between the watch lasting over two weeks or, instead, about six days.

Still, despite being dimmer when the standby ‘always-on’ mode kicks in, it’s very easy to wake up again fully. A quick flick of the wrist, or raising your arm to check time is enough to wake it up fully, and it’s reliable, so you never really feel like you’re missing out.

Apart from the display making that clear visual difference, the experience of using the Epix to track everyday fitness, health and activities is pretty much identical to the Fenix 7. That’s to say, it’s very good at what it does: offering a solid GPS signal and relevant information for the activity you’re doing.

The one thing we did notice was that the Multi-band GPS support on the Sapphire/Titanium Epix we were testing seemed to lock on to the signal quicker than the Fenix 7, which didn’t have multi-band. However, there are models of both that support that.If you want a bit more depth on what it’s like to use these watches for running, you can read more in our Fenix 7 review. However, the long and short of it is that it’s a very comprehensive tool that offers pretty much all the data you could ever need to analyse your performance.

Garmin’s strength isn’t just showing data, it also presents this in a useful way. If you do an intense activity, it’ll tell you to rest for longer and tell you how productive your training is, and even suggest workouts for you. It’s a great system. There’s also the relatively new Stamina measurement, which can ensure you don’t over-stretch yourself at any point in the workout. 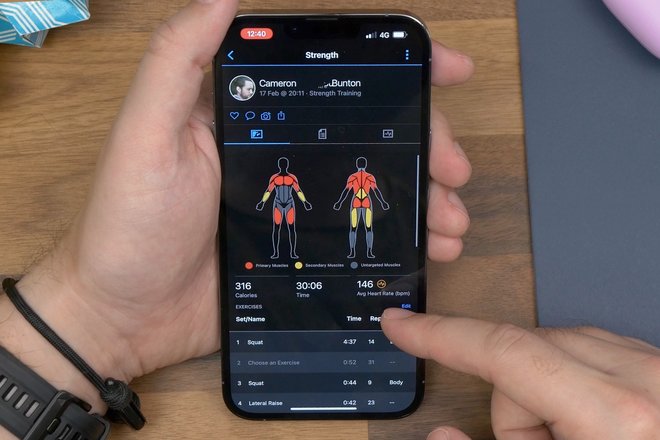 Of course, it’s not just great for running – this is a proper multisport watch. We tested it doing some strength exercises, too, and it can provide solid accuracy in rep tracking, and also show which muscle groups were worked the hardest.

Tracking like this is inherently flawed for those who mix in single-arm reps, of course, but the point is that Garmin offers some kind of tracking and feedback for pretty much every sport or exercise scenario you can imagine, and usually does it to a very high standard.

Garmin offers a list of lifestyle features that make it genuinely useful every day, but it strategically leaves some bits out in order to keep the battery performance strong. The reasoning behind this is the same as we’ve seen from the likes of Huawei and Garmin for a few years: “proper” smartwatches with fast refresh displays and interactive notifications need charging virtually every day.

Perhaps charging every night isn’t an issue to some, but to others it is, and that’s where watches like these come in. If, for instance, you want to track your sleep most nights, you obviously can’t do that if your watch is on charge. 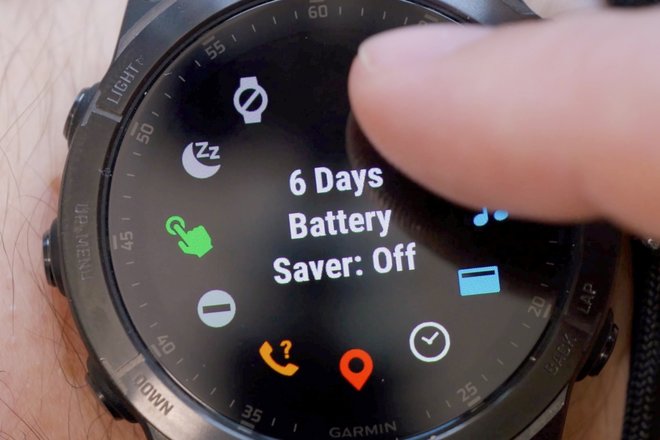 So, you don’t get properly interactive replies to messages etc. However, Garmin does have its own contactless payment service. If your bank supports it, you can pay with your watch. Likewise, playlists from popular music services like Amazon, Deezer and Spotify can be downloaded for offline listening. Just pair some buds and away you go.

This is all in a watch with a battery that, with the always-on display activated, can last almost a week between charges. In our testing, we usually got somewhere between 5-6 days with 3 or 4 workouts a week, usually around the 30-40 minute mark. Switch that always-on function off, and it’ll go a couple of weeks.