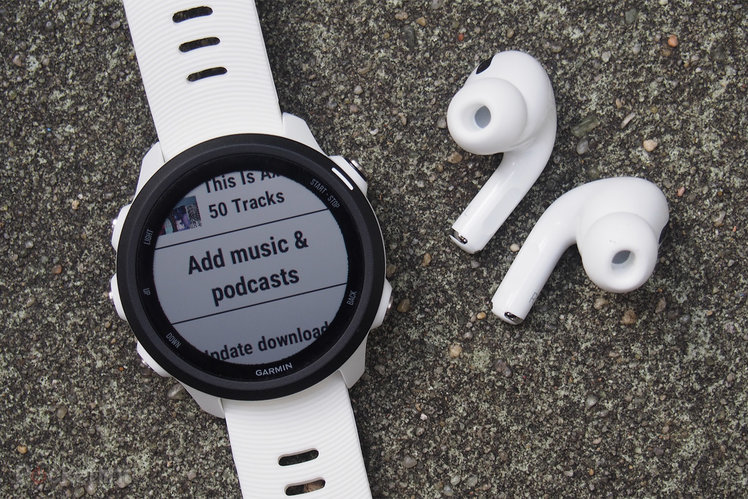 Like its predecessor, the Forerunner 235, the Garmin 245 Music is a watch aimed at anyone who’s ready to start taking their running tracking more seriously.

Sitting above the budget-friendly and more basic Forerunner 45, the 245 brings more in the way of insights and analysis into your workout sessions. It’s also bringing more smartwatch features, including – as you might have guessed from its name – a built-in music player.

That’s all achieved from a design that’s slimmer than its predecessor. Everything is in place to therefore make this another great option for runners.

The first thing to note here is that there are two versions of this watch. There’s the standard Forerunner 245, and the 245 Music that we’re reviewing here – the latter being pricier because it brings added music features. Design-wise they look the same.

The 245 without music features the same 42mm polymer case with the choice of a merlot or grey strap. The 245 Music comes in black, white and aqua colours with the same red accent around the top right physical button to identify that’s the button to press to get tracking.

There’s five physical buttons in total and no touchscreen, so those buttons are your means of navigating watch screens. For a sports watch, we can live without the touch panel, because you don’t always want to be staring at the screen. Besides, it won’t take long to get to grips with the actions those buttons are assigned.

The 245 Music is noticeably smaller and lighter than the 235 and, as a result it’s more comfortable to run and work out with. We’ve had no problems taking it to bed either to put the sleep monitoring to the test. That comfort extends to the 20mm silicone watch strap, which is removable if you want to throw on one of Garmin’s official straps or a third-party option.

While the size of the screen is roughly the same as the 235, it has improved the screen resolution to show off your stats on noticeably sharper surroundings. It’s a transflective display, to improve visibility in bright sunlight. 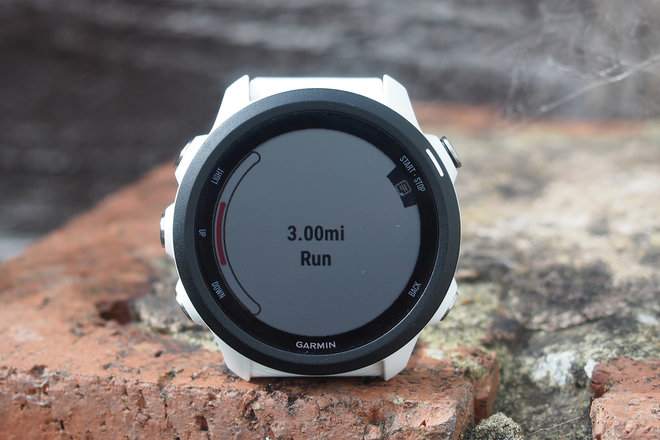 There’s a backlight to aid nighttime runs, though you don’t have the ability to tinker with brightness like you can on pricier Garmin watches. If you can cope without the kind of full colour touchscreen display that you will find on Garmin’s Venu watch, it’s a solid enough screen that’s good to view at day or night.

If you want to take it for a dip (and you can), Garmin has slapped it with a 5ATM waterproof rating – making it safe for a shower and a swim up to 50 metres depth.

The 245 is also capable of tracking cycling and swimming (pool only) and offers Garmin’s staple fitness tracking features – including step tracking, in addition to stress and sleep monitoring. 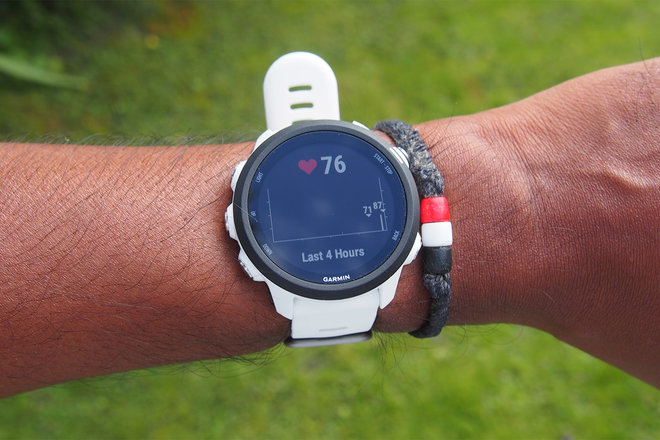 But it’s a watch primarily built for running, which is where it’s main appeal lies. Most of the key sensors are on board to deliver key running metrics. That includes support for key satellite systems to offer comprehensive mapping. Garmin’s latest generation Elevate heart rate monitor is there too, as is an accelerometer to track indoor running.

It also manages to squeeze in a pulse oximeter sensor, which is designed for keeping you safer during high altitude training, but will also unlock richer sleep data. Though, as we found, sleep tracking isn’t always that reliable, particularly when it comes to recognizing when you’re actually asleep.

One sensor it does miss out on is an altimeter. If you care about tracking elevations in your runs, you miss out on that here.

But if you can live without that then this is a solid watch to go running with. GPS signal pick-up is nice and swift, real-time running metrics are easy to absorb, and crucially hold up accuracy compared against Garmin’s Fenix 6.

When it comes to heart rate monitoring, Garmin looks to its own Elevate sensor and performance has certainly improved from what the 235 served up as far as accuracy is concerned. For evenly paced runs, it was generally well in line with a Polar H9 chest strap we pitted it against. But when it’s time to ramp up the intensity with some interval running, some inaccuracies creep in. It’s certainly not the worst performer out there handling those more challenging heart rate testing conditions, but it’s not quite on par with a chest strap. Fortunately, you do have the ability to pair it with one if you so wish.

That external chest strap will also come in handy for the host of training and analysis features that make the cut on the 245. It’s these features that really separate it from Garmin’s budget running watches. 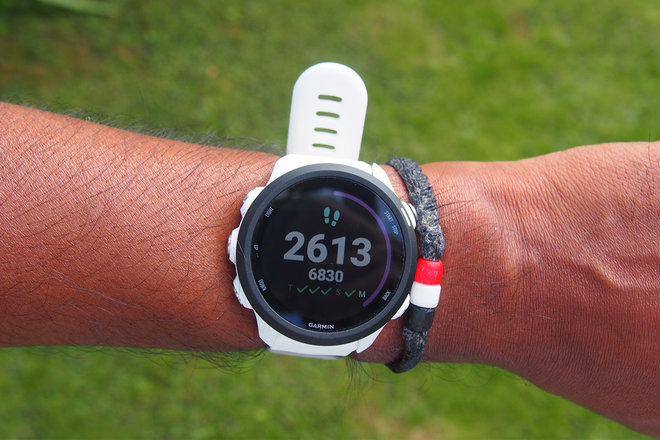 These are led by Training Status, Training Effect and Training Load insights, which had previously only appeared on Garmin’s top-end watches.

Training status data is based on workout history, letting you know if you should’ve gone for that big run or maybe taken a rest day. Training Effect gives you an insight into future fitness levels based on each training session. Last up is Training Load, which breaks your sessions down into buckets to show whether you are dedicating time equally to all forms of training.

All of these insights are useful if the data underpinning them is reliable. Most are based on heart rate data, so if you value those insights, we think it’s wise to invest in a heart rate chest strap monitor. 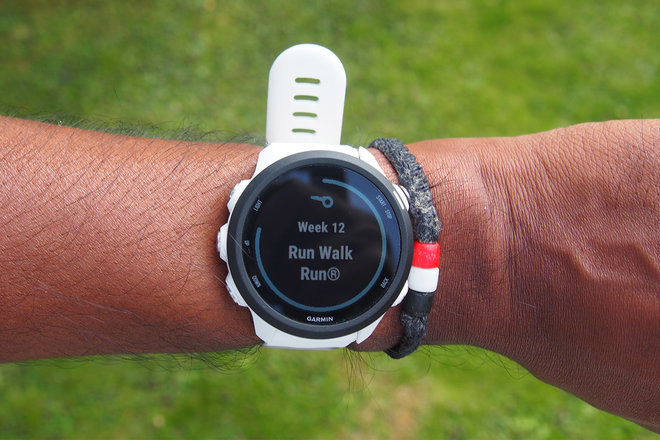 If you’re starting to think about moving from runs in the park to racing and don’t know where to start, Garmin also provides access to its Coach platform. It offers plans for 5K, 10K and half marathon distances with three coaches on offer. Upcoming sessions in your plan are uploaded to the watch and will account for missing a session or putting a temporary pause on your plan.

All of Garmin’s watches these days offer what you’d say were staple smartwatch features like the ones you’d find on an Apple Watch or something like the Samsung Galaxy Watch. 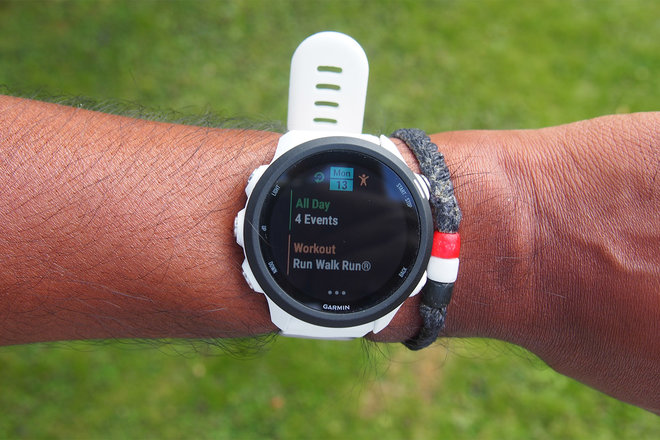 It’s compatible with both Android and iPhones giving you notifications, weather forecasts and calendar appointments. The experience across the two platforms are largely the same, though Android phones users do have the ability to respond to texts and reject incoming calls.

If you opt for the music model version, then you are getting a pretty desirable feature in the way of a built-in music player, which first launched on the Forerunner 645. All 245 models will let you control music playback from your phone, but the 245 Music version gives you room for up to 500 songs or a decent amount of podcasts and audiobooks.

How you get those onto the watch is done in one of two ways. The first is a drag and drop job by connecting it to your computer through Garmin’s Express software. The other is by loading on playlists from supported streaming services, which include Spotify, Amazon Music and Deezer. You’ll need to be on Wi-Fi to do it all and have enough battery to transfer over. 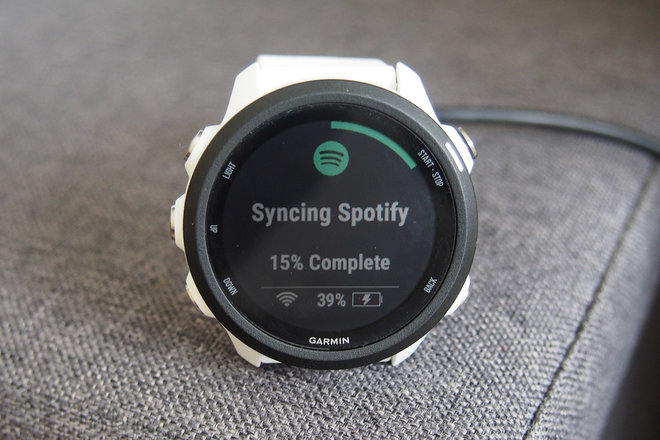 The experience of running with music is generally pretty good too. One of the physical buttons is dedicated to launching the music app, which can be easily accessed during a run. You’ll need to pair Bluetooth headphones to listen and we successfully tested it out with the Jabra Elite Active 75t, Apple Airpods Pro and Aftershokz Aeropex headphones and had no issues getting them connected on the first attempt at pairing.

You’re also getting access to Garmin’s Connect IQ Store, which is by no means as polished a store front as Apple’s App Store or the Google Play Store. It’s not brimming with things to download in comparison to Apple or Google, but if you want more watch face options, apps to improve tracking or additional data fields, there’s some solid options to sync over to the watch available.

This is a running watch that’s built for those who don’t mind reaching for the charger after a week’s worth of workouts. If you’re regularly running over seven days, there should be enough GPS battery time to have you covered. 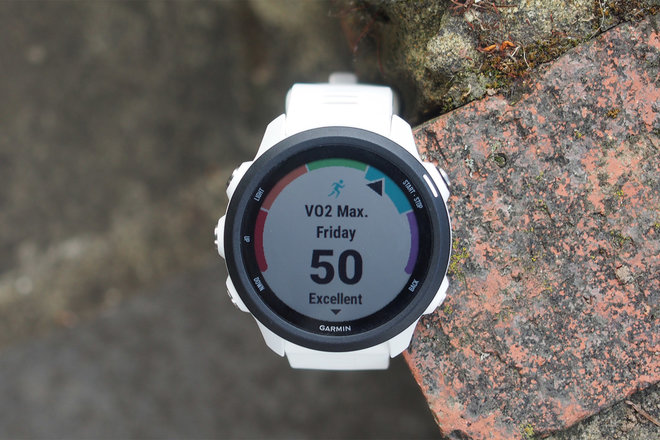 If you’re using it for a mixture of tracking and checking in on notifications and the time, you will comfortably get a week out of it and likely a little bit more than that. That screen doesn’t drain the battery in any horrible way and that’s a big reason why Garmin opted for this display tech for the majority of its watches.

There are some features that will have a more noticeable impact on battery performance. The first is music streaming. For a 30 minute run with music, GPS and heart rate, battery drop-off was around 10 per cent. That’s a bigger drop-off than running without music streaming. Keeping the pulse oximeter sensor switched on will also quickly dent the battery life, though Garmin does make you aware of that before you enable it. 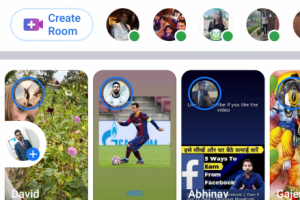