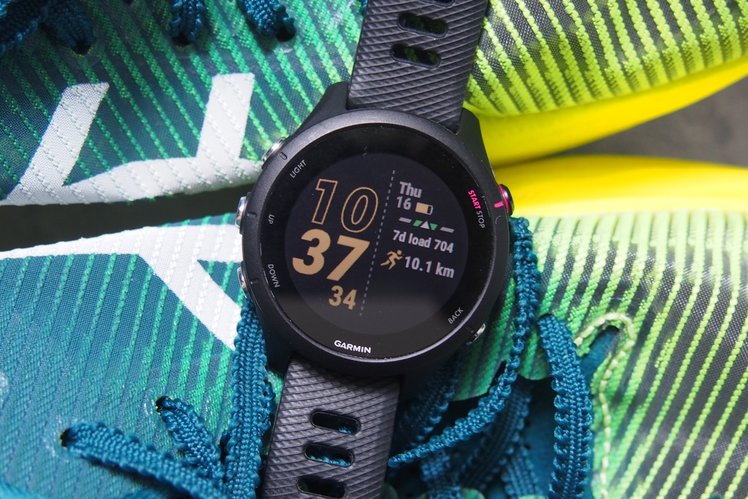 The Forerunner 255 sits around the middle of Garmin’s extensive family; a running watch that’s a step up from the entry-level Forerunner 55, but not quite as advanced as something like the Forerunner 955.

And while the headline addition on the last-gen model – the Forerunner 245 – was the addition of a music player, the pendulum has swung back again towards the tracking experience. Garmin has added the same multi-band GPS present in the Fenix 7 and Epix 2 watches, as well as adding plenty of recovery tools and profiles to support triathlon training.

With devices like the Polar Pacer Pro and the Coros Apex sitting in this bracket, though, there’s stiff competition. Has Garmin done enough here to ensure the Forerunner 255 stays ahead of the chasing pack? We’ve been testing in order to find out.

In the previous generation, there was only one case size option available. With the Forerunner 255, that’s been added to – and the option to add music for a little more cash is still present.

At 39g, it’s very light, which is exactly what you want from a sports watch. It’s not quite as light as the Coros Pace 2, but it’s a watch you largely forget is even there. 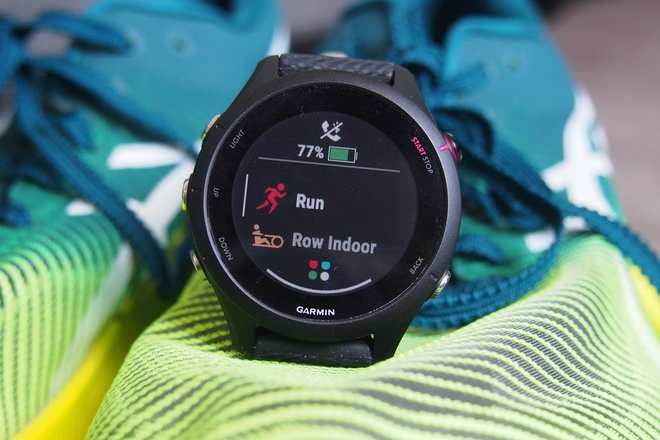 On the 255S, there’s a 1.1-inch, 218 x 218 transflective display, with the regular 255 packing a larger, 1.3-inch, 260 x 260 resolution display. There’s no AMOLED here, like with the Garmin Venu and Epix series, so it’s familiar display tech that Garmin has stuck to for years, offering strong visibility in bright outdoor light without hampering battery performance.

There’s no solar power here, either, so you miss out on Garmin’s PowerGlass lens tech, with just Corning’s Gorilla Glass 3 there in place to add a layer of protection. And, while the display is tiny, it’s also easily viewable – even if you’re trying to check tracking stats underwater.

It’s not a touchscreen display, though, so you’re dealing with a pretty typical array of physical buttons dotted around the screen. Pressing down on the top left one gets you into your quick settings menu, and the bottom left pushes you into the music player and controls screen. If you’ve used a Garmin watch recently, it will all feel very familiar. 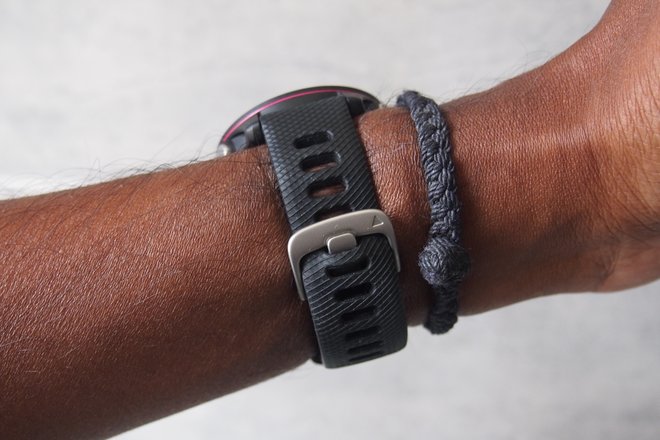 In terms of straps, Garmin is sticking to a pretty similar silicone, quick-release strap. The 255S uses 18mm options, and the bigger 255 features 22mm variants. There are additional bands you can pick up, of course, if you want to mix things up.

On the underside, meanwhile, is Garmin’s Elevate heart rate sensor, which can also take care of delivering blood oxygen data during sleep or throughout the day (to the detriment of battery life). Garmin also sticks to the same 5ATM water-resistant rating as the 245 here, so it’s also fine to keep on for swims or your morning shower. 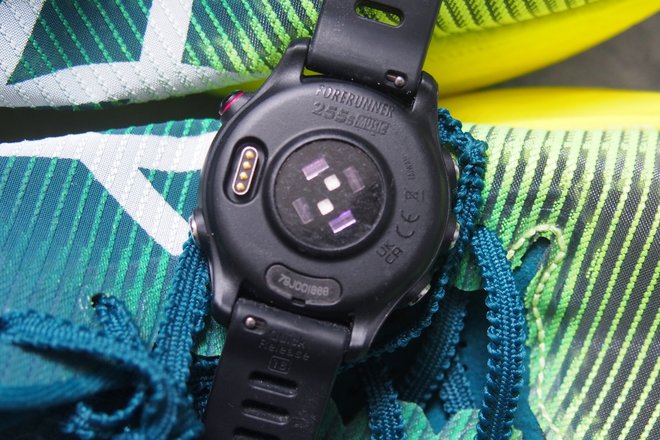 The Forerunner 255 pair – as the name suggests – is still primarily built for runners, and that’s reflected in the core features. Whether you want to track runs, get coached to run a 5k, optimise training or find out how fast you could run a marathon with your current level of training, then the 255 has you covered.

It’s not just about running here anymore, however. The central tracking modes are still running, cycling and swimming, but Garmin has now included tracking support for open water swimming and added a triathlon mode, making it more suitable for the multi-discipline support. Prior to the 255, you’d have to pay more for the Forerunner 745 or 945 to get that level of support. Now, it’s available for less – and it’s about time, too. 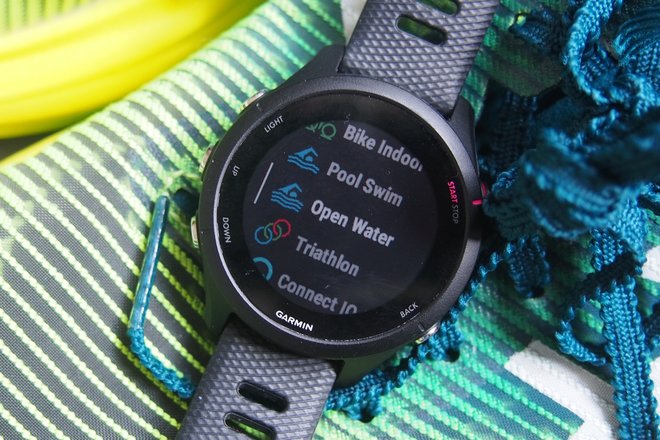 Back to running, though. There are plenty of new features to get into here, including greater accuracy for tracking outdoor runs, as well as enhanced modes for interval training and even a race widget that offers personalised workout suggestions and tips to help you get to the starting line in shape.

The big addition, as we’ve alluded to, is the addition of Garmin’s multi-band positioning support, which seeks to improve accuracy by communicating over different frequencies to various satellite systems. This should help in challenging tracking conditions, like around big buildings or in tall, wooded areas. Putting it to use does have a greater impact on battery, but, ultimately, based on our testing, it does deliver more accurate tracking data – just as it did on the Epix and Fenix 7 series.

Another new feature added into the mix is something that Garmin calls Morning Report. A version of this appeared on the Vivosmart 5, and now it’s going bigger – you get details about your sleep, recovery and workout suggestions based on training and recovery needs. 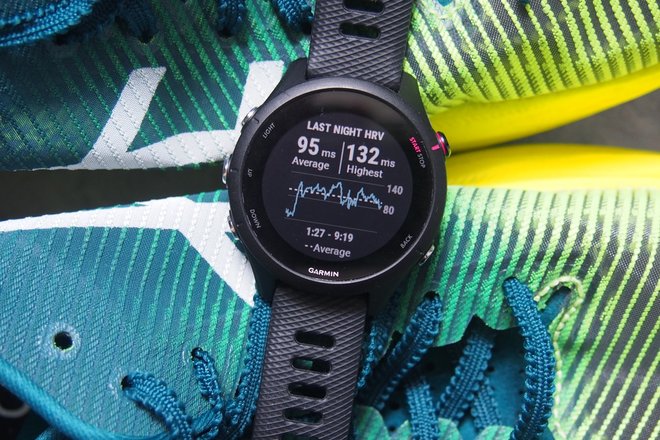 The customisable reports also include Garmin’s new HRV Status insights, which are designed to inform you of your readiness to train based on heart rate variability measurements captured during sleep. You’ll need to capture three weeks of these readings before you receive a full status, so it’s a feature you need to be patient with, but it does really help add some context to the numbers.

Elsewhere, Garmin offers pretty much all of the same features as it did with 245. There are some navigation features, say, but this still stops short of the full mapping experience you get on the pricier models. Plus, you still have access to the excellent Garmin Coach platform, allowing you to access plans for specific tagets, as well as tracking profiles for things like strength training and yoga.

Garmin’s Elevate heart rate monitor is a solid performer for monitoring heart rate and fueling many of the heart-rate powered features on board. It performed well on steady paced workouts and actually held up well in our high intensity tests and was within 2-3bpms of a chest strap monitor. Using the PulseOx sensor continuously still puts a dent in the battery, so if you really want to use it, it might be best to use it during sleep only. That sleep tracking feels a little more reliable on the whole but can still overestimate sleep duration at times.

There’s the same smartwatch features here too, with Garmin Pay on board, notification support, access to the Garmin Connect IQ Store and you do have that music player, which works with both your own music and streaming services like Spotify. Of all the sports watches that offer smartwatch features, Garmin arguably still offers the best, but it doesn’t quite rival what you’ll get from an Apple Watch or a Samsung Galaxy Watch on that front.

Garmin is promising some improvements on the battery front, whether you go for the 255S or the 255.

For the 255S we tested, you can expect 12 days in smartwatch mode, 26 hours in GPS mode and up to 13 hours in that more accurate multi-band mode. So that’s improvements across the board, but smaller ones on the 255S. 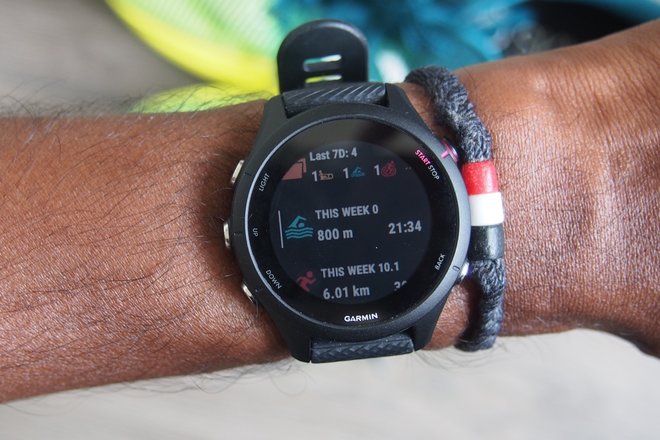 We found that the 255S was good for a week’s worth of training when we used the more accurate multi-band tracking mode for outdoor run tracking. We also tracked pool swims and found daily drop-off can give you just about a week. Using that multi-band mode does see a noticeably bigger drop-off, around 4 per cent for similar runs using GPS where that drop off is usually 1-2 per cent.

If you factor in streaming music, that still does have a noticeable impact on battery life, though Garmin has now offered the ability to choose between stereo and mono to reduce that dent and still get a hit of music on your runs for longer.

So for us, it’s a slight improvement on battery performance compared to its predecessor, but you’re not going to get weeks of training like you will on Garmin’s top-end watches.