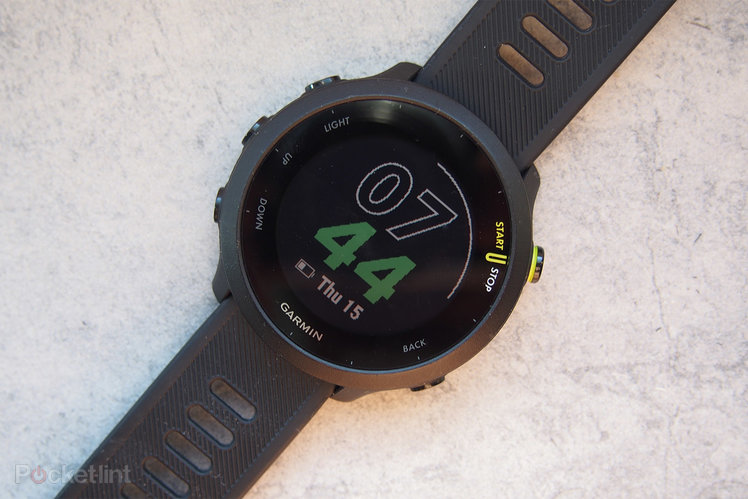 The Garmin Forerunner 55 is effectively set to replace the Forerunner 45 as the affordable option in Garmin’s large family of watches built for runners.

Along with covering the running watch bases with built-in GPS, heart rate monitoring and delivering core real-time running metrics, it also brings in features that debuted on pricier Forerunners – features such as PacePro pacing strategies, a race predictor, and daily suggested workouts.

With the price jumping up slightly from the earlier 45 model, you’re paying a little extra for those software extras, though the Forerunner 55 feels less like an entry-level product than its predecessor.

The Forerunner 55 at first glance doesn’t look that different from the Forerunner 45. It matches the larger 45’s 42mm watch case, and while it increases slightly in thickness, it’s not in a way you’d really notice. 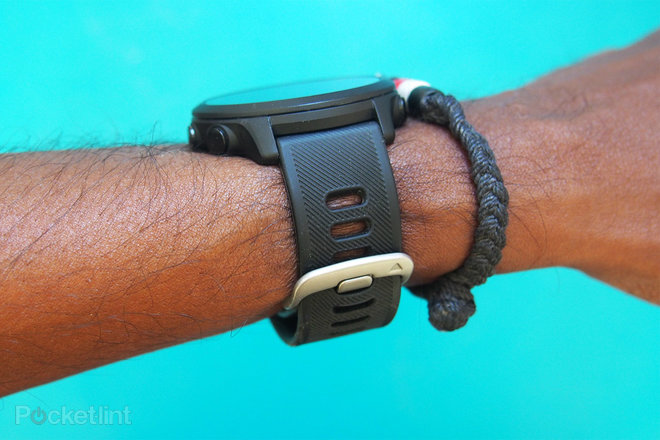 In typical Forerunner fashion, it’s a polymer case that’s matched up with a 20mm silicone band that uses Garmin’s quick-release bands, making it much easier to swap in one of Garmin’s other official bands or grab a cheaper alternative from somewhere else.

There are four case colours in total, letting you pick from white, black, aqua and grey – which are the kind of colour schemes we’ve seen appear on other Forerunner models. The overall look is unsurprisingly sporty, but it’s a small, lightweight, and overall a comfortable watch to live with.

Around that case you’ll find five physical buttons that operate in the same way as they do on the 45. Hold down the top right button and you can find a shortcut to some settings. Press the button below that and that will push you deeper into those settings menu.

Front and centre is a 1.04-inch display, matching resolution to what Garmin offers on the Forerunner 45. While it’s a small screen, visibility is strong in bright outdoor light, and there’s a backlight that offers ample brightness to make it one that’s easy to glance at for night-time runs and workouts. 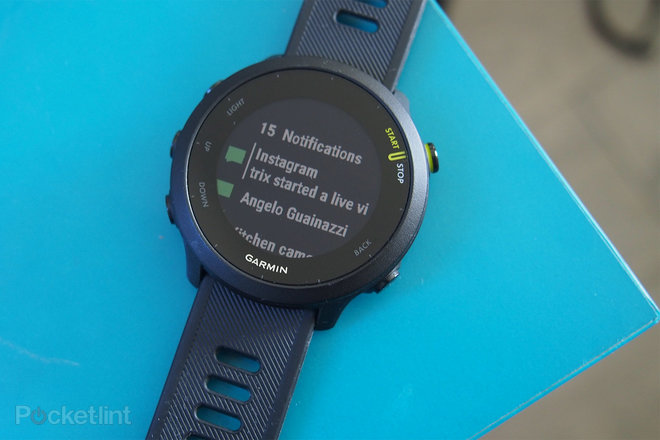 Around the back, there’s Garmin’s Elevate optical heart rate monitor, which doesn’t seem to be the most up-to-date version of the company’s sensor technology – which first appeared on the Venu 2 and the Venu 2s. There’s also no pulse oximeter, although that’s perhaps not all that surprising given the 55 sits at the more affordable end of Garmin’s Forerunner range.

As a package, you’re getting something that’s water resistant to up to 50 metres depth, making it suitable for keeping it on for a swim too.

Garmin does all of its software business in-house and that doesn’t change with the Forerunner 55. You’re getting something that’s compatible with Android phones and iPhones and requires Garmin’s Connect companion app to set things up and view your health and fitness stats. It’s also compatible with third-party apps, so you can push data to the likes of Strava and MyFitnessPal. We had no problems firing runs, workouts and swims over to Strava.

In terms of that on-watch software experience, it’s going to feel like a familiar place if you’ve played around with a Garmin from 2020 onwards. The big software change in the 55 over the 45 is that Garmin has embraced its new-look user interface that swaps widgets for a stream of glanceable data that you can view in one place and then expand if you want further details. It’s an approach that feels like the right step from Garmin in terms of making getting around and finding the data you care about quicker.

With the 55 you have to contend with the fact you’re not getting the full complement of smartwatch features that you will find on other Forerunner watches. There’s no built-in music player or Garmin Pay for instance. What you do get is the ability to view notifications, control music playback on your phone, and view data such as weather forecasts. Unlike the 45, you do now get access to everything in the Garmin Connect IQ store.

Off the watch, Garmin Connect can still feel like an overwhelming place for anyone who’s new to the Garmin platform, and there’s much more to find in the dropdown menu too. It pays to spend some time getting to know where things live, particularly getting your watch settings right and seeing how you can also push workouts to the watch and setup running-focused features such as Garmin Coach.

In terms of hardware, you’re getting the same as what you’ll find on the Forerunner 45. The same satellite support for mapping outdoor workouts, plus a heart rate monitor to continuously track heart rate or monitor it during exercise. There’s also an accelerometer to track indoor workouts like treadmill runs and now pool swims. 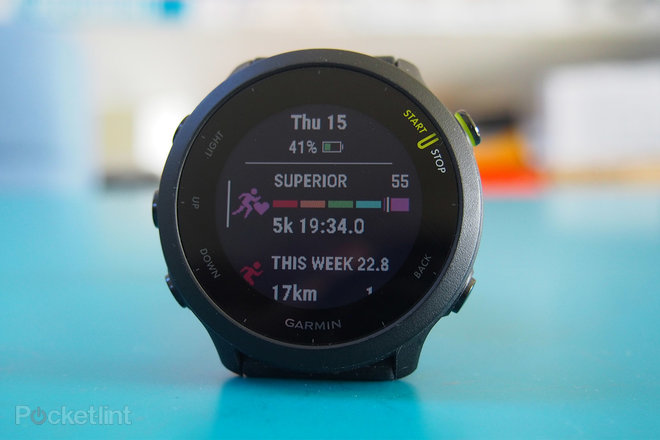 What Garmin has sought to do here is lay on top features that take the 55 from a basic running watch to a much smarter one. These features have already appeared on other Forerunner watches, but now they’ve filtered down to one of Garmin’s most affordable watches.

We will lead with running because that’s what the Forerunner 55 is really about. There are five running profiles, including new track running modes and a virtual running mode to make it one that will play nice with apps like Zwift. You can capture running metrics basics like pace, distance, time and pace.

The Bluetooth and ANT+ connectivity means you can pair sensors like footpods and external chest strap monitors as well. We had no problem pairing up Garmin’s own HRM-Pro chest strap and the latest generation Wahoo Tickr X strap.

While GPS pick-up was a little sluggish at first, things picked up after a few runs and against the pricier Garmin Enduro it held up well on distance tracking and delivering those core metrics. Heart rate performance doesn’t break the mould from what you’ll get from other Forerunners: it’s well suited for steady paced runs, but pair up a chest strap when you’re tackling high intensity training. 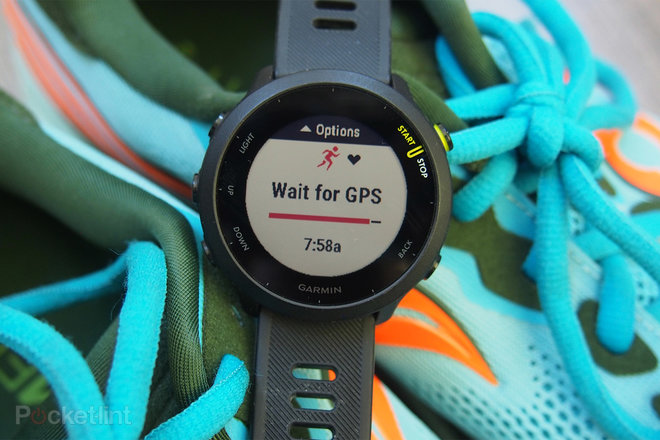 What changes in the 55 over the 45 is what’s at your disposal prior, during and after your run. Before you get tracking, you now have access to Garmin’s PacePro pacing strategies, which is a feature designed to help you better strategise and nail your pacing during a run or, more usefully, during a race. You’ll need to select your course profile in Garmin Connect and then sync it over to the watch. From there you’ll be guided to hit a certain pace based on the profile of the course. You won’t see a map of the course as the 55 doesn’t support maps, but it will still offer that guidance without it.

There’s also access to race predictor and finish time features, which unlike previous versions of these features, take into better account of your logged running history to better understand how quick you can finish a 5K – but also show what time you’ll finish if, say, you’re trying to squeeze in a run before a meeting.

Garmin has brought over its daily suggested workouts and improved recovery advisor, but those features are slightly scaled back from the ones that debuted on the Forerunner 745 and have since rolled to other watches. They’ll still offer recommended running-based workouts based on running history and pay close attention to recovery time. That recovery advisor simply tells you the hours to consider training again based on the intensity and duration of logged workouts. They’re definitely more guides than definitive advice, but if you’re new to running and looking for some guidance on what to do and when to do it, these are nice features to have. 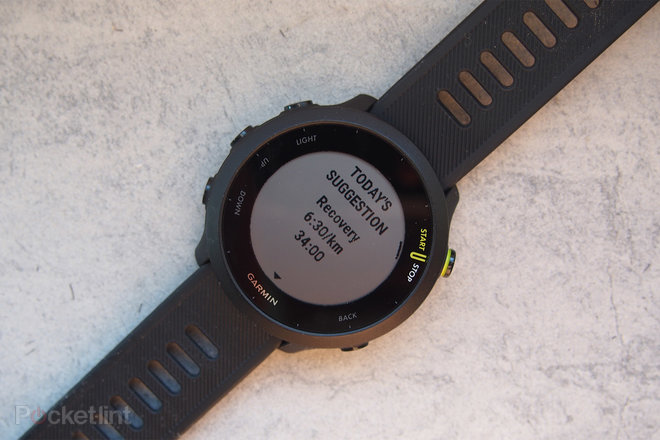 Outside of running, this watch is still fit for tracking outdoor cycling and now there’s pool swim tracking, which lets you track metrics like distance, pace and stroke count. There’s stroke recognition and auto rest support too. Garmin’s pool tracking is consistently solid across its watch range and that doesn’t change with the Forerunner 55. It’s just nice to see that swim tracking has finally been added to the mix.

If you want a fitness tracker and something to monitor aspects of your health, this watch crams those features in as well. You can track steps and automatically monitor sleep – although like a lot of Garmin devices, the 55 tends to over-report sleep duration. There’s now support to track respiration, too, which is delivered by that Elevate optical heart rate monitor. Women’s health tracking works across the watch and the Connect app too, which wasn’t available on the 45.

The Garmin Forerunner 55 offers a battery boost when you’re tracking and when you’re just using it in smartwatch mode. You can expect to get up to 2 weeks, which is about double that of the earlier model. It’s moved from 13 hours to 20 hours for GPS-tracking battery life, which are quite sizable improvements on the stamina front. 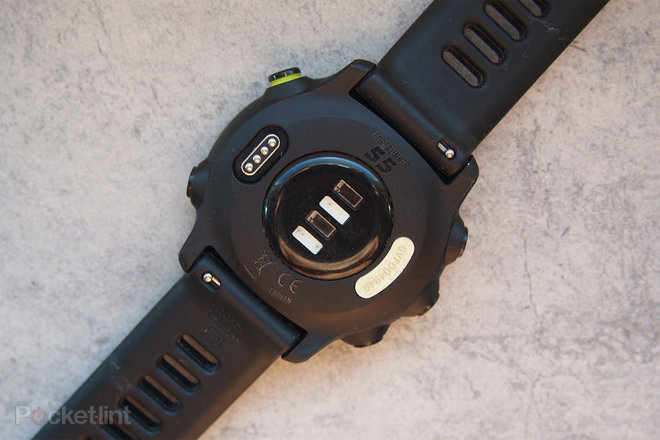 Essentially, though, the 55 is a watch that’s good for a solid week’s worth of training when tracking everyday and also using its smartwatch. Cut that down to maybe 2-3 GPS based workouts and you can get close to that fortnight. It’s worth mentioning that if you have a habit of switching up watch faces, particularly ones from the Connect IQ store, you might find some may cause the battery to drain quicker than using Garmin’s own preloaded faces.

In terms of battery drop-off when GPS is in use, this isn’t a watch that’s hit hard and we found it would drop just below five percent per an hour’s worth of running – so 20 hours of non-stop if you’re an ultra ultra runner. While it might not be the best of the very best battery numbers you can get at this price, it certainly doesn’t underperform, so we’re rather impressed with the longevity.