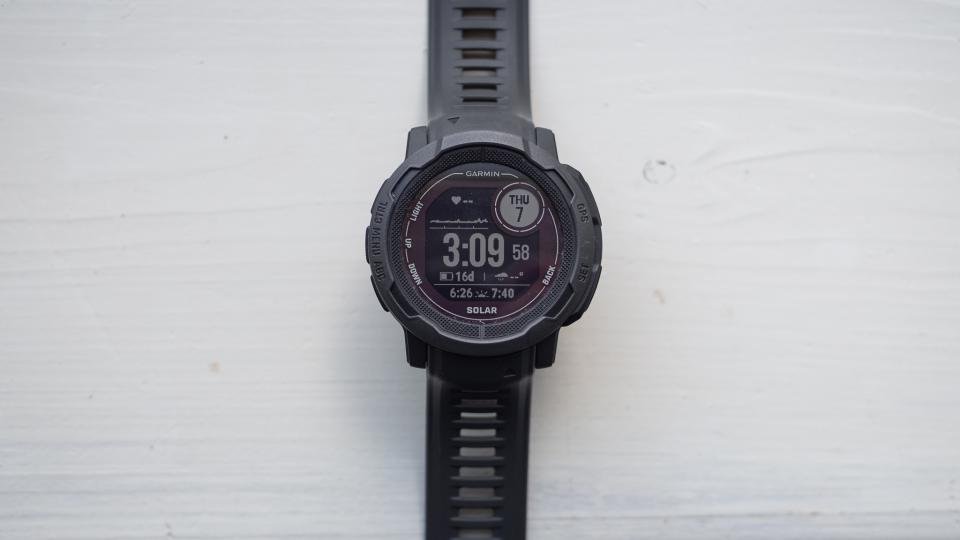 The Instinct 2 is a brilliant and rugged sports watch, although the Solar edition probably isn’t for everyone

When I reviewed the Garmin Instinct back in 2018, I referred to it as a poor man’s Fenix 5 Plus (£470). It might not sound like it, but that’s high praise indeed. If you were looking for a rugged GPS watch, it offered a unique feature set at a competitive price (£270), making it an easy recommendation for outdoorsy types.

Fast-forward a few years and the Garmin Instinct 2 has built on the original model, primarily with a few hardware tweaks and plenty more fitness features. For this review, I tested the Solar edition (£390), which offers significantly improved battery life, even compared with the regular Instinct 2. However, unless you desperately need that extra longevity, the regular Instinct 2 (£299) is better value.

Garmin Instinct 2 Solar review: What do you get for the money?

From afar, the Instinct 2 Solar isn’t so different from its predecessor. On the solar model we were sent by Garmin, the main difference is that the watch now has a light-sensitive bezel that gathers solar energy. It still has Garmin’s trademark five-button design and the Instinct’s trademark two-part display, but it’s slightly sharper than the display on the original (176 x 176 versus 128 x 128 pixels).

Arguably, the main difference with the Instinct 2 is that there’s now also a smaller 40mm model in addition to the 45mm model, which has a slightly lower-resolution 156 x 156 display. Whichever model you choose, there’s a range of different colours to choose from and these vary according to the size and whether you opt for the Solar edition or not. As with all Garmin’s recent wearables, the Instinct 2 is compatible with the GPS, Glonass and Galileo satellite systems, so you should have no trouble tracking outdoor activities wherever in the world you find yourself. It still comes with a compass, altimeter and thermometer and, thanks to Garmin’s new Elevate 4 heart-rate sensor, it will also monitor your blood-oxygen levels, either continuously or on-demand. 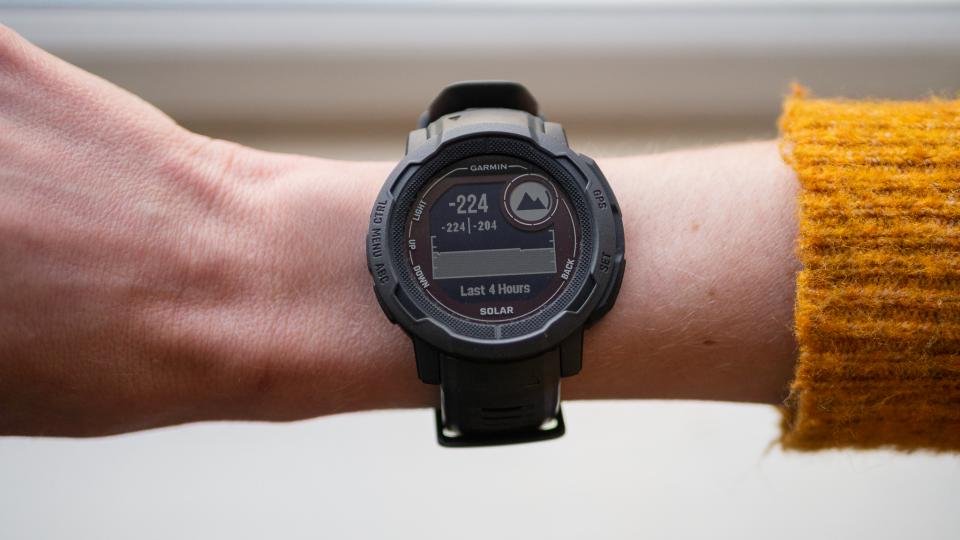 As with its predecessor, the watch is MIL STD 810 certified and waterproof to 10 ATM (100m), meaning it can accompany you on all manner of expeditions, but it has better battery life, with Garmin claiming the 45mm model can last up to 28 days in smartwatch mode, compared with 14 days on the original. Battery life while GPS tracking has also nearly doubled, up to 30 hours without enabling any power saving modes versus 16 hours.

If you opt for the Solar edition, Garmin makes the bold claim that these figures can be extended to “unlimited” and 48 hours respectively. Both of these outcomes are dependent on the watch being worn outside in very bright (50,000 lux) conditions (for a minimum of three hours a day for the former, and for the duration of activities for the latter), which might be easier said than done for much of the year in the UK.

Thanks to its smaller battery, it’s worth highlighting that the smaller 40mm model offers a mere 22 hours of GPS tracking, which can be boosted to 28 hours with solar. The claimed 21 days in smartwatch mode can be extended to a whopping 51 days if you opt for the Solar edition.

Aside from the aforementioned upgrades, there are a number of key new features that have been added to the new Instinct 2. Most of these are fitness-orientated with the new model now offering VO2 max tracking and fitness age, along with training load, training status and training effect insights when you start using the watch to log workouts.

In addition, the Instinct 2 is also better placed to log your activities in the first place. It now has multisport, triathlon and SwimRun modes, supports power meters and smart trainers and, crucially, the new Elevate 4 sensor can also track your heart rate during swimming. 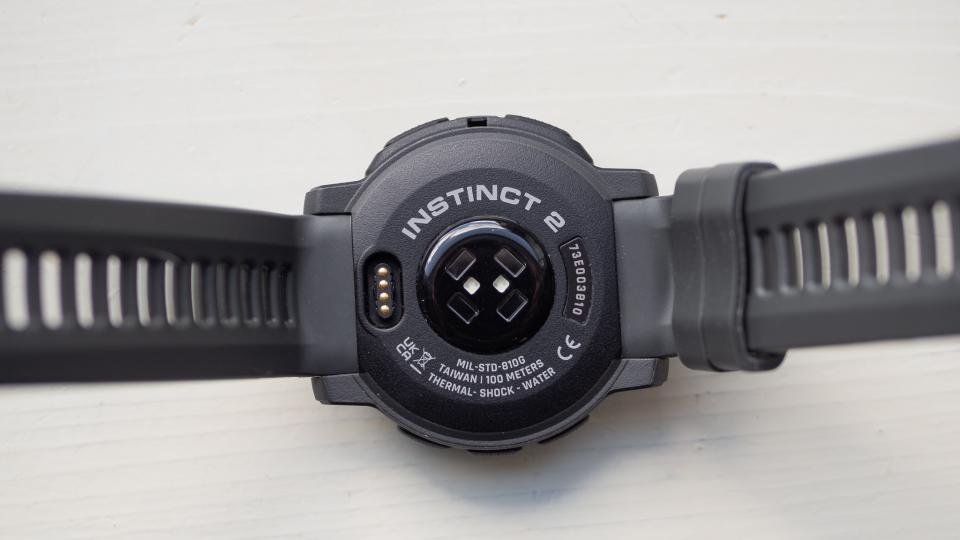 There are also some key new running features, including PacePro, which helps you to pace running events providing you upload the course beforehand, and Garmin Running Power. The latter can only be added via Garmin’s Connect IQ app (it also requires you to have Garmin’s Running Dynamics pod or a compatible Garmin HR strap) but that’s an improvement in itself, since the first Instinct smartwatch didn’t support Connect IQ apps at all. Indeed, you can now also download a range of different watch faces, apps and widgets on the new model.

Everyday fitness features are improved, too, with the Instinct 2 offering more in-depth sleep tracking than its predecessor, including a sleep score. As I’ve already touched on, you can now monitor your blood oxygen levels, which means the Instinct 2 also now offers an altitude acclimatisation feature (in addition to heat acclimatisation). One key omission on the previous edition was a golf mode, and that’s been rectified here as well.

Last but by no means least, Garmin has brought the Instinct 2 more in line with its Vivoactive and Fenix range of watches by adding Garmin Pay. Support in the UK is still very limited, though. (You can find the full list of banks that support Garmin Pay on the Garmin website.)

After using the Instinct 2 as my everyday watch for a number of weeks, I’ve grown really fond of it. It tracks all the activities and fitness metrics I could ever need and lasts a long time between charges. Crucially, it does all of that while having a rugged and robust design that’s reminiscent of a Casio G-Shock watch.

That means I don’t have to worry too much about knocking or scratching it and, despite its rugged credentials, it’s comfortable to wear for extended periods. There are slimmer GPS watches available – the Garmin Venu 2 Plus is a better choice if that’s what you’re looking for – but at 52g it’s much lighter than Garmin’s flagship Epix (70g) and it’s svelte enough that I have no problems wearing it at night. Thanks to its transflective memory-in-pixel display and five-button layout, it’s easy to read and use in all weather conditions, and finding the relevant fitness metrics is simple, thanks to the watch’s straightforward interface. Indeed, if you’ve ever used any other Garmin watch, you’ll immediately feel at home with the Instinct 2. All those new fitness features are welcome additions. Previously, the Instinct was pitched as an outdoorsy/hiking watch but its lack of fitness features such as VO2 max estimates and training effect insights may have put off keen runners and cyclists. Now Garmin has made up for those shortcomings, it’s a more viable alternative to the Fenix series than ever before. 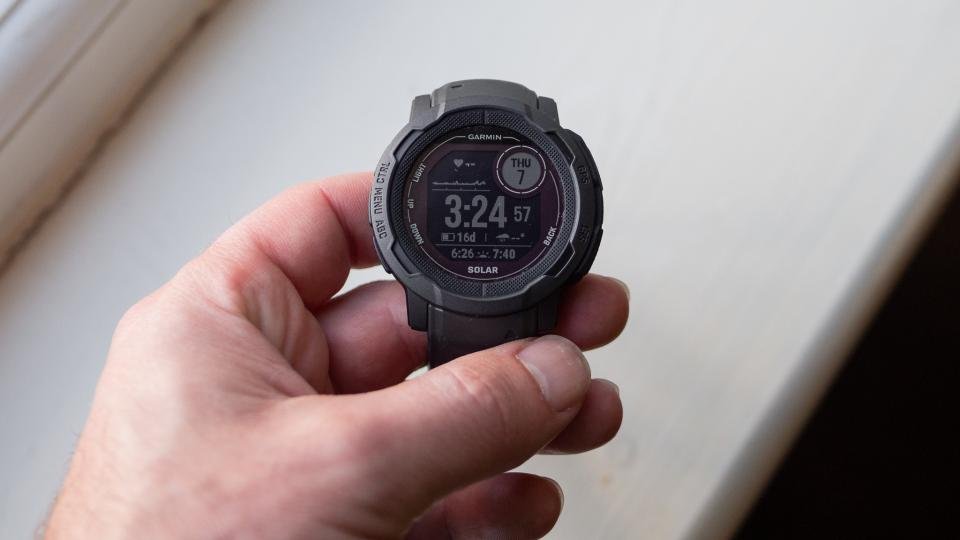 Indeed, if you’re a keen cyclist, there’s no problem if you leave your trip computer behind, as you can simply pair your power meter and other sensors with the Instinct 2 instead – a major step in the right direction. On that note, if you’re a keen mountain biker, the watch also supports Garmin’s relatively new grit and flow features.

Garmin Instinct 2 Solar review: How can it be improved?

Although the Solar feature is certainly a nice bonus, it doesn’t appear to offer a significant advantage during winter and early spring months in the UK, especially if you work from a desk for most of the day, as I do.

The watch registered some “solar intensity” on most days I wore it, but there’s no way of determining exactly how much battery life you’ve gained. My hunch is that, to truly benefit from the feature, you’d need to spend a good chunk of the day outside or leave your watch in direct sunlight whenever you have the opportunity.

Perhaps the more important question to ask yourself is, when the non-solar model lasts up to 28 days in smartwatch mode, why you’d need anything more anyway. Aside from that minor point, it’s difficult to find much fault with the Instinct 2. As with the model before, there’s still no music functionality or full maps, as you get with the Fenix 7 or Epix gen 2, but those both feel like acceptable compromises when you consider the watch’s simpler design and lower price. 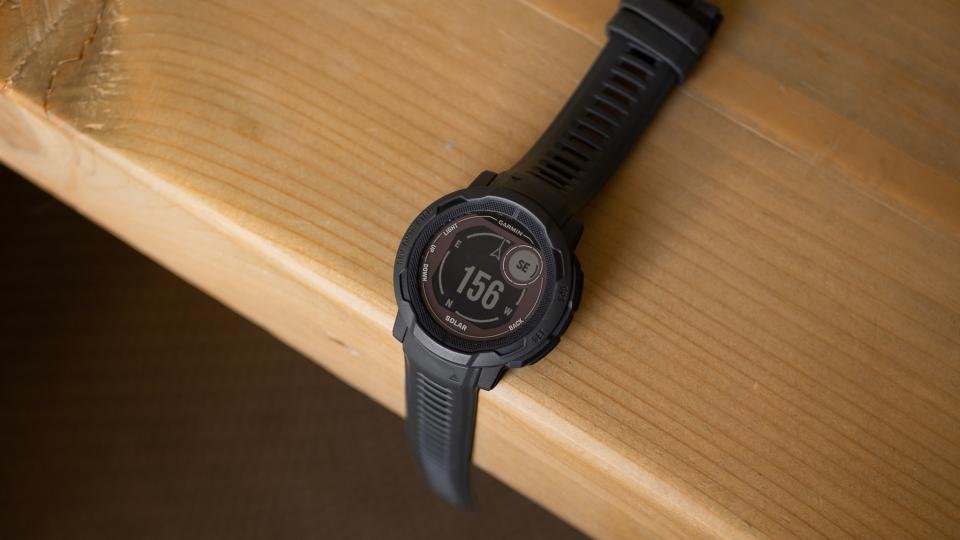 I found the Instinct 2 to be as accurate as any other Garmin watch with an Elevate 4 sensor when it got a good lock on my heart rate and perhaps better than the Epix I tested most recently, but it’s worth being mindful that even the best optical sensors still struggle in particular situations. Cold weather and the vibrations associated with cycling, in particular, can wreak havoc with accuracy, so I’d still always recommend using a chest strap if this matters to you. The only other thing to highlight is the price. At £390, the Garmin Instinct 2 Solar is considerably more expensive than the regular model at £299. You could save up a further £50-100 and get your hands on a Fenix 6 Pro, which offers the premium features I’ve outlined above.

Garmin Instinct 2 Solar review: Should I buy it?

If money is no object or you spend lots of time outdoors, then you might decide the extra £90 is a worthy investment to improve the battery life from very good to outstanding. It’s certainly no gimmick. Just be mindful that when UV levels are low, as they are for much of the year in the UK, the impact of solar charging might feel a little underwhelming.

That’s why I’d recommend the regular Instinct 2 as the best model to go for. It offers the same rugged design as its predecessor but builds on it with an impressive array of new features that should appeal to anyone who’s keen to keep an eye on their fitness. For £300, there’s nothing else quite like it.