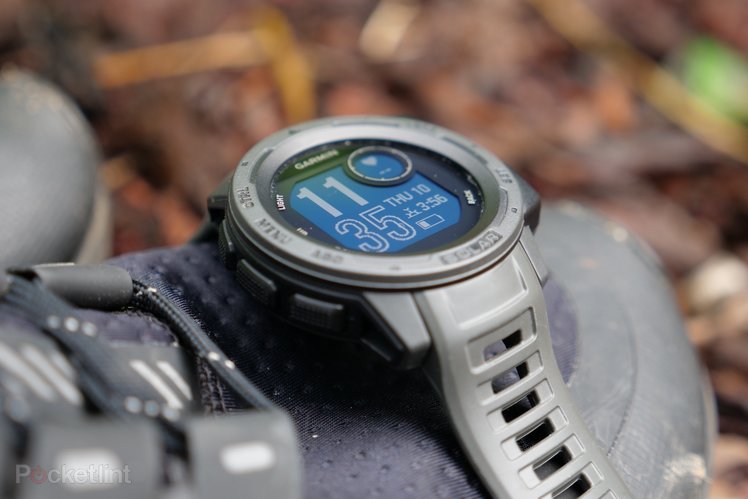 For the most part, when you look at the fitness tracker or smartwatch market you’ll generally see a device which looks something like a traditional watch, but with a single colour screen taking up all the space on the front. There aren’t too many that look and feel like a digital watch that also feature all the same features as a smartwatch. That’s the little slice of market that the Garmin Instinct Solar has for itself.

The Instinct Solar’s casing is chunky, with design cues seemingly taken from those proper digital watches we used back in the 90s to time our runs. It’s similar in approach to the G-Shock Move from Casio, except because it’s a Garmin, it takes advantage of all of the company’s expertise in fitness tracking and data – which is currently miles ahead of Casio’s offering.

The Instinct Solar is quite plasticky in appearance and feel. Technically it’s a ‘fibre-reinforced polymer’, but it just looks and feels like plastic. It doesn’t have any of that premium brushed or polished stainless steel or aluminium you find on Garmin’s more lifestyle/fashion focused watches. There’s some practicality in that though: it’s designed to feel lightweight but also be durable. 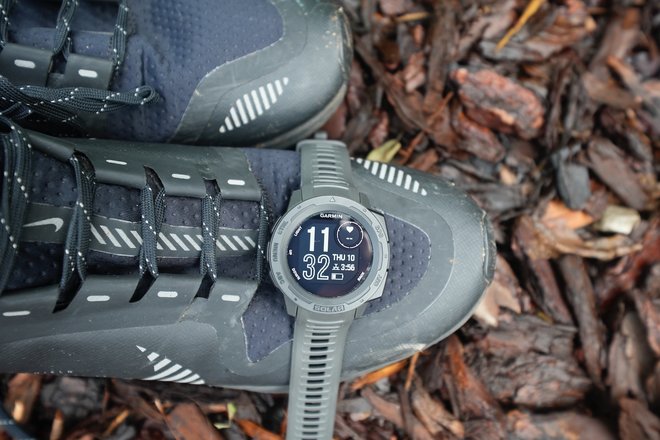 Its chunky bezel surrounding the round display area is raised a decent distance from the screen, to make sure that if and when you knock it, you’ll more than likely hit the plastic framing of the watch, rather than the glass over the display.

In classic Garmin fashion, there are five buttons around the outside for controlling the onscreen interface with corresponding primary and secondary function labels printed and etched into the display and bezel.

It really is all about practicality here. The watch is light enough that you don’t really feel you’re wearing anything most of the day, and with its ‘military standard’ durability and water resistance up to 100 metres, it can get you through anything you want to throw at it.

Even the strap, which has holes all the way up to the watch case, is designed to make sure it’s adjustable to any wrist size, even really small and really big ones.

Apart from its design, what sets the Instinct apart from other Garmin models is the monochrome display. Or, rather, displays. 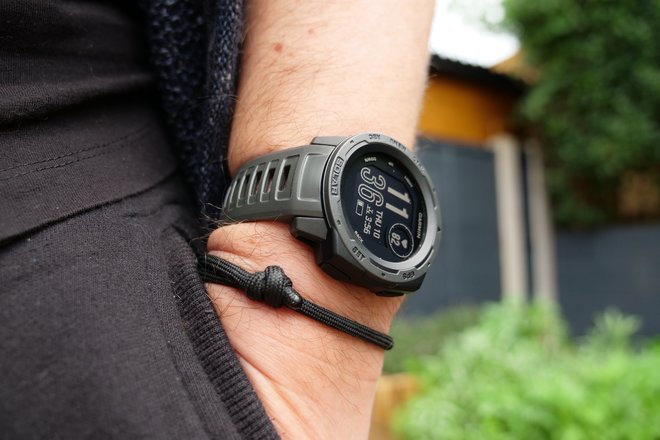 It has two-window design, so there’s the main round display, plus a smaller round window in the top right corner designed for small complications. Being a black-and-white panel means you don’t get a fast refresh rate or any fancy graphics, but it does enable one of the Instinct’s biggest appeals: epic battery life.

The interface is very similar to some of the other Garmin devices too. Press-and-hold the middle button on the right and you can dive into the settings to customise the watchface and other aspects, including choosing what information you want in the tiny complication window.

During an activity that combination of displays is useful to some extent, but often feels like it’s missing some information.

One of the great things about the Instinct is that – function wise – it offers a lot of the same tools and capabilities available on the more expensive watches. You get smartphone notifications on your wrist, and pretty much any sports metric you could want, plus a multitude of activity modes. 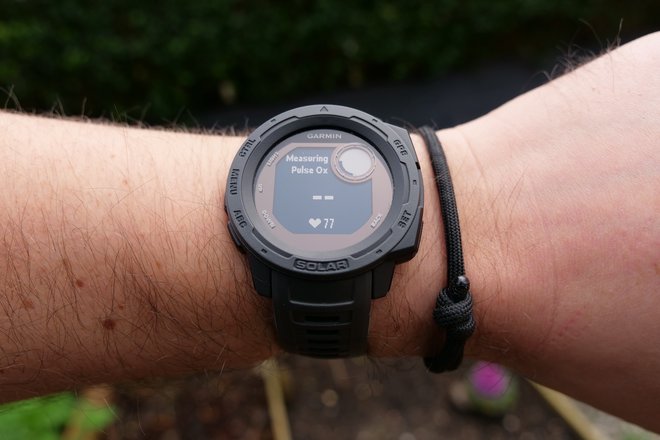 The only things missing – compared to some of the more lifestyle-oriented devices – is offline music playback on your wrist and Garmin Pay. That means you can use the watch to control music on your phone, but you can’t have Spotify, Amazon or Deezer playlists directly stored on the watch itself. So if you want music on a run, you need to take your smartphone with you.

We used ours primarily for running and – as always – the versatility is there in buckets. One of our long-time favourite tools to use is Garmin Coach. In previous years we’d use it to improve our pace for set distances like 5K and 10K runs, but being 2020 it was a little different. Instead, having lost a lot of fitness, we opted to just try and get back up to 5K distance again, and found the Garmin training plans to be so useful.

When you setup the plan you tell the app what distance you want to achieve – whether you have a time goal or not – and then input how often you currently run and how many kilometres you do each week on average. It then builds a plan for you with virtual guidance from a coach in form of weekly videos explaining the benefits of various running session types, resting and diet.

It’s capable of a lot more than just running plans though. Hikers or climbers are well served by tools like breadcrumb trails in real time, which can help lead you back to your starting point if you get lost. You can also pre-load routes onto the watch before heading out and using it to navigate.

You get barometric readings and storm alerts, vertical speed measurements, elevation plots and – of course – GPS co-ordinates. As always there’s automatic syncing with Strava when you set that up, so any outdoor or indoor activities can be logged to the popular social network for runners and cyclists. Garmin also has its own Connect platform, which is perfectly decent too.

If you’re more of an indoor workout person, you can easily switch into an indoor cycling session and measure those, or even pick up some kettlebells and log workouts. Swimmers can kick it into pool or open swimming mode and get readings like distance, pace, stroke and efficiency.

In essence, pretty much any major sport or activity is catered for, making the Instinct one of the more versatile trackers on the market. Even if you just want something for measuring your everyday activity, Instinct will do that too. It’ll count your steps, and – if you want it to – track your sleep for you to provide insight into how well you’re resting.

What’s interesting about Garmin’s sleep tracking is that it’s also tied with the Body Battery function, which can predict how tired you are based on how much intense activity you undertake and how much rest you’re getting. It’s been pretty accurate in our testing, and useful in quelling that “I’m not doing enough exercise” anxiety. 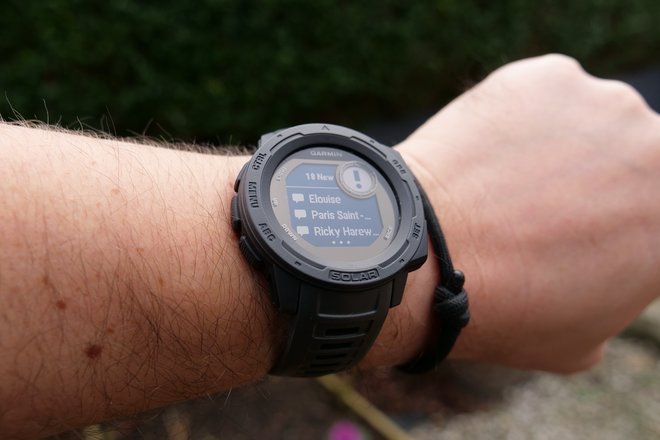 You can view all of this data either on the watch, or for a deeper dive, in the Garmin Connect app. This provides you with the basic overview on its home or My Day page, but also gives you the option to go much further and look into your performance metrics. Runners, for instance, can keep an eye on their VO2 Max to see if they’re getting any fitter over time. You can even measure your oxygen saturation if you want.

The only thing we feel it’s missing compared to the likes of the Fenix series is the guidance on how long you should rest to recover from your previous activity. Given how intense some sessions can be, it was always useful to have a watch that analysed the stress you put your body under and then estimated how long you need to rest.

Undoubtedly the biggest draw of the Instinct Solar is how long it can go between charges. There’s simply nothing like it on the market for pure longevity. It’s to the point where you almost forget that it might need charging. But then your mileage will vary depending on whether it’s winter (and dark) or summer (and light).

We’ve been testing the Instinct Solar for roughly six weeks, and in that time we’ve only had to charge it once. For context, this is during November and December when daylight hours have reduced significantly, to the point where we’re either indoors excercising or running outside in the dark. Whichever way you look at it, that’s pretty good going. Given the battery level at time of writing, we suspect a month between charges is a reasonable expectation with a three or four workouts per week schedule. 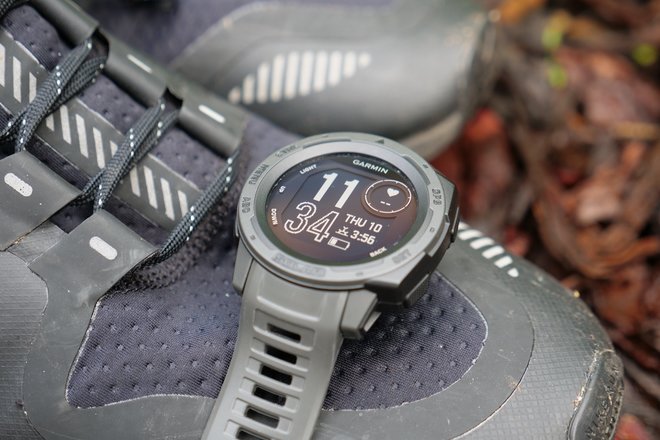 In the summer, of course, that battery life should increase further as you spend more time outdoors and more exercise is undertaken with the sun in the sky. As mentioned, a good amount of the front surface is taken up by a solar lens which captures the sun’s rays and turns it into power.

As far as overall reliability and tracking goes, the Instinct Solar feels as reliable and consistent as its flashier, colour-screened siblings. GPS distance tracking and heart-rate monitoring seems reliable, with results being pretty much as we expect on a wrist-worn device using it for activities that we regularly test watches on. So you’re not missing that consistency even though you’re paying less for the watch than you would a Fenix or high-end Forerunner.