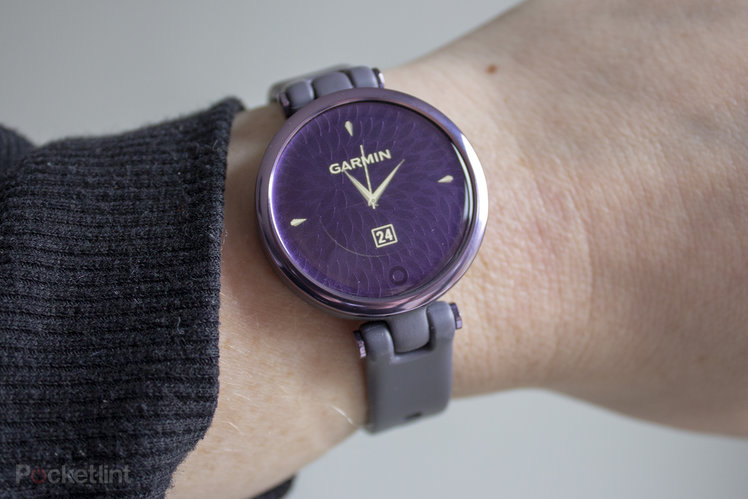 The Garmin Lily is pitched as a smartwatch for women. Garmin says it’s the smartwatch we’ve been waiting for: “classic enough to make a statement and modern enough to keep you connected”.

With a patterned lens over a greyscale touchscreen and a super small and compact design, is the Garmin Lily really the smartwatch women would want – or is the non-targeted wider market a far better place to pick from?

The Garmin Lily is small – very small in fact – which is probably why Garmin has specifically pitched this device at women. It would get completely lost on a larger wrist. With a 34mm casing, it’s 6mm smaller than the 40mm Apple Watch, but its strap is much slimmer too, making for a very feminine device overall. 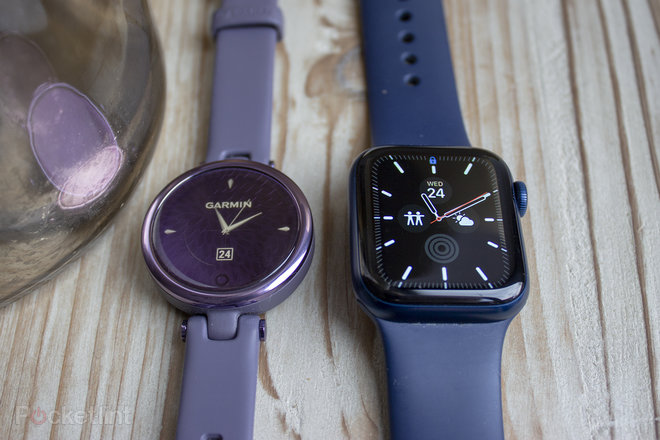 Some will love its simplicity and elegance, while others will find it just too little. Compare the Lily to the likes of the Garmin Vivomove or Vivoactive ranges and you’re looking at a device that’s a fraction of the size.

In terms of finish though, the Lily is stylish and the design is versatile – it looks good with sportswear as well as dressier outfits. We aren’t quite sold on the patterned lens, though, which sits over the touchscreen – which, by the way, only appears when you flick your wrist – but the polished bezel, lugs and detail on the buckle are all nice touches. 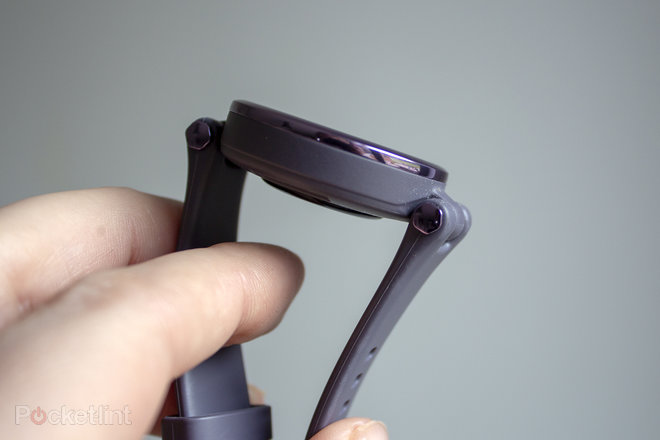 Flip the Lily over and you’ll find the heart rate monitor (HRM) on the underside of the lightweight casing, along with the charging pins. We had the Sport model so our review unit has a silicone strap, which is soft and comfortable to wear. There’s also a Classic model, with a more classic strap.

The Garmin Lily has a 1-inch touchscreen display that sits behind a patterned lens. It’s a clever design, though as we mentioned previously, we aren’t huge fans of the actual pattern that Garmin has chosen. 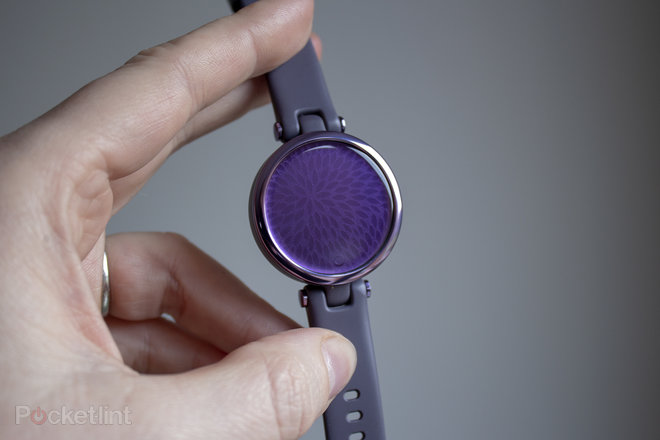 The touchscreen is greyscale so there are no rich and vibrant colours like you would get on the Apple Watch or Fitbit Versa, making it a little less exciting than other smartwatches available. The touchscreen is nice and bright, however, so we had no issues seeing it in brighter conditions.

The screen is responsive too, when it’s actually on and you are navigating through the various options. The flick-of-the-wrist action or pushing the touch button at the bottom of the screen to get it on is less responsive though.

There were multiple occasions where we had to flick our wrist several times to wake the display up. The touch-sensitive button works fine, but you have to hit it in exactly the right spot – and the size of the device can make this fiddly. 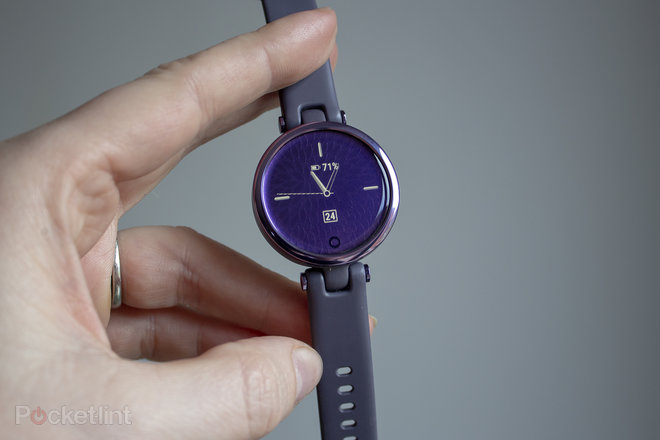 There’s also no always-on display option within the settings. This feature would of course drain the battery – which isn’t great anyway, more on that later – but it means the patterned lens is very prominent when the touchscreen isn’t on, which is most of the time. Many of the clock faces available are simple and perfect for having on all the time so we’d have liked this as an option.

The Garmin Lily is packed with features – some of which are excellent – but it misses out on a couple of important ones. Let’s start with what it does have though. 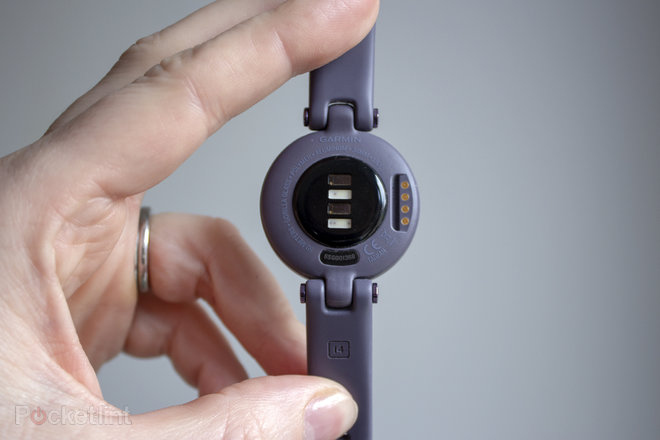 Other features include 5ATM water resistance (which is down to 50m depth) and basic swim tracking, smartphone notifications, weather notifications, the ability to control your smartphone music, text response and call reject functionality (for Android users) and running cadence. 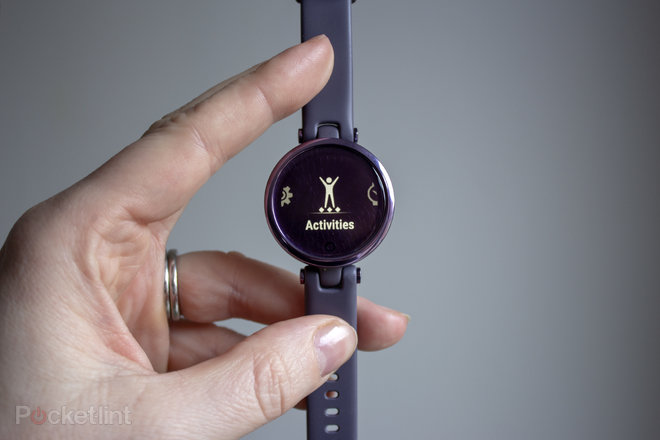 Sounds like a lot, we know. And it is. But you’ll get those on other Garmin products, by and large. And the Lily misses out built-in GPS – which seems like a major omission for Garmin – and especially at this price point. It’s a bit baffling really.

The Lily does offer Connected GPS, but that of course requires you to take your phone with you when you run or walk. It also doesn’t offer Garmin Pay and there aren’t as many specific workout options available compared to the likes of Apple Watch.

The Garmin Lily’s battery life is claimed to last for up to five days, but we struggled to get three out of it. On a couple of occasions we got less than two. Turning off blood oxygen monitoring helped to extend the life – as this cuts into the battery life significantly – but it definitely wasn’t a five-day device in our experience. 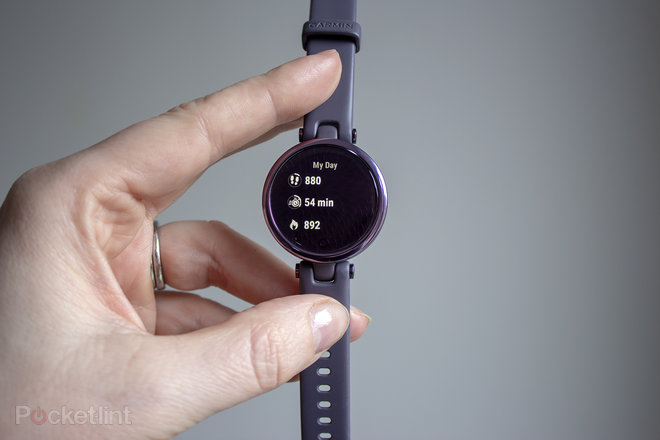 In terms of other features though, the Lily performs well. Though we would really like to see more activities to select, like Hiit, the Lily was on par with the Apple Watch Series 6 for the way it measured any runs or high intensity workouts we did.

The heart rate monitor responds quickly during Hiit – something we didn’t find happened with the Fitbit Sense – and our runs were almost identical in terms of statistics to the Apple Watch.

Sleep tracking is also great on the Lily – if you want to go to bed wearing a watch – and we love the idea of Garmin’s Body Battery feature, although we wish it didn’t always tell us we were basically running on fumes. 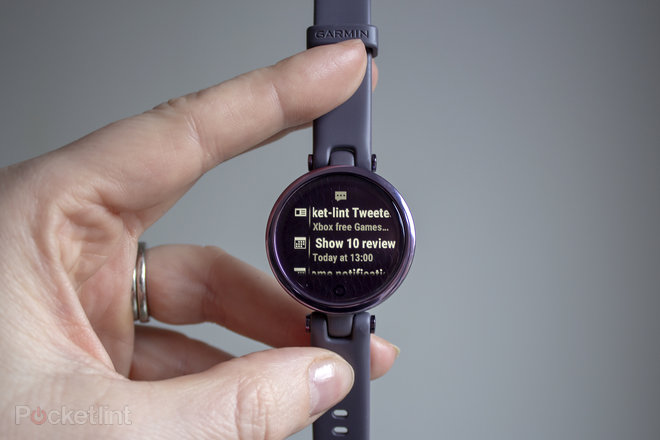 Smartphone notifications, however, are disappointing. Garmin calls the Lily a smartwatch, but it isn’t really – or at least not compared to the likes of the Apple Watch.

For those on Android, you can reply to texts and reject calls on the Lily. But for iOS users, you can only clear notifications, making it a little pointless and pretty much just a battery drain.

The Garmin Connect app offers a number of extra features on top of those found on the Lily itself. It’s also where you’ll find all the collected data, allowing you to delve a little deeper.

The Connect app is easy to use once you know how – much like the Lily itself. It’s not as clear as the Fitbit app, but there’s heaps of data to go through if you want. There is also no paywall on Garmin for some features, like Fitbit has done with its Fitbit Premium subscription.

To see a summary of all the activities you have specifically tracked using the Lily, you can tap on your profile at the top of the Garmin Connect app. You can also see a summary of your statistics here too, like personal records.At the bottom of the Connect app, you’ll find five tabs: My Day, Challenges, Calendar, News Feed and More. The first is likely the one you’ll use most, giving you a summary of your activity, including heart rate, Body Battery, stress, steps, calories. Tapping on each category will give you further breakdowns.

To change settings – such as selecting which activity options appear on the watch – tap on the circle at the top of the Connect app with the Lily in it. From here, there are alert settings, general settings, appearance and activity tracking settings to go through, among others. 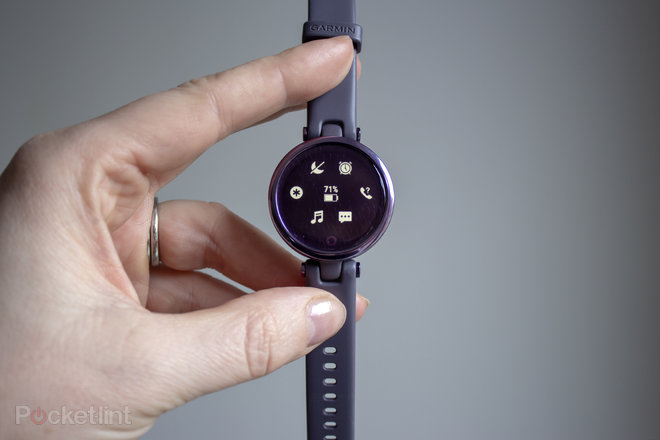 On the Lily itself, tapping on the touch-sensitive button at the bottom of the display will take you to the main menu, which includes Watch Face, Activities, Settings and Clocks.

Swiping down from the top of the main screen will take you to a quick setting menu with options like Do Not Disturb and Notifications. Tapping on the Notifications icon is the only way to see past notifications that have come through on Lily from your smartphone.

Swiping right to left or left to right on the main screen of Lily will take you to My Day, with further swipes detailing health stats, calendar appointments, weather, menstrual tracking, hydration, Body Battery, and intensity minutes.