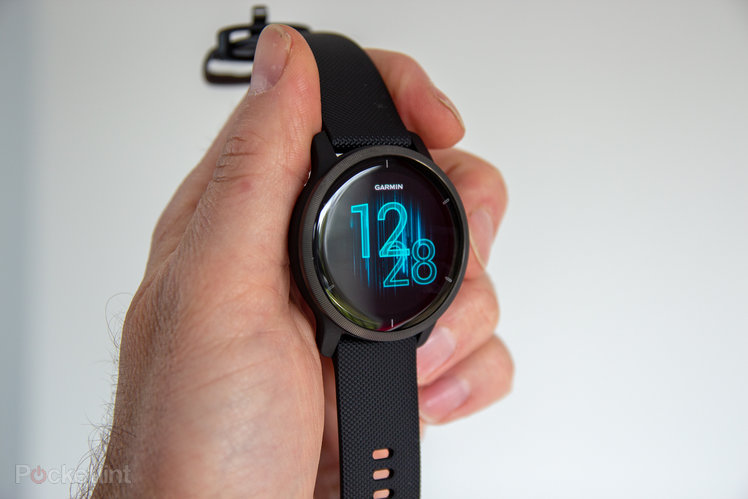 The original Garmin Venu was Garmin’s stab at something more like a smartwatch. It was designed to address the display above all things, sporting an AMOLED screen – and looking better than all the other devices in Garmin’s range.

That’s true of the Venu 2 too and we’ve had one on the wrist for a couple of days to bring you some first impressions.

Glance at the Venu 2 and you might not know if you’re looking at a new watch or the old model. The overall design is pretty much that same – and it’s a safe design. 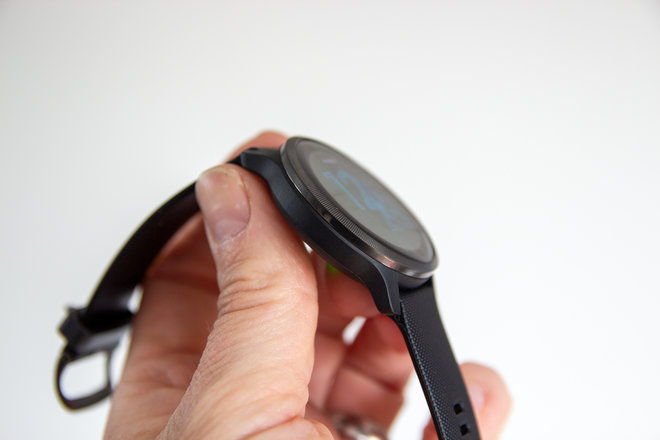 The watch case sticks to polymer, topped with a stainless steel bezel to give a premium look around the display. The big change is that there’s now two sizes – 40 or 45mm – so there’s a Venu 2 for every wrist.

That also sees a change in the straps you can attach to it, with 18mm and 22mm supported respectively, allowing you to chop and change to get the look you want.

As we said of the original Venu, the design is rather safe. It doesn’t quite reach to the premium looks that you get from the Apple Watch, but it’s conventional enough. We suspect much comes from the close relationship to the Vivoactive – with the Vivoactive 4 also coming in the same sizes.

There’s a difference, however. The case of the Venu 2 now appears to be one piece, whereas previous models had a separate backplate and body, not that that makes a huge difference. For those who like to examine sensors, there’s also a new arrangement to the Elevate heart rate sensor on the back, which we’ve not seen in other Garmin devices. 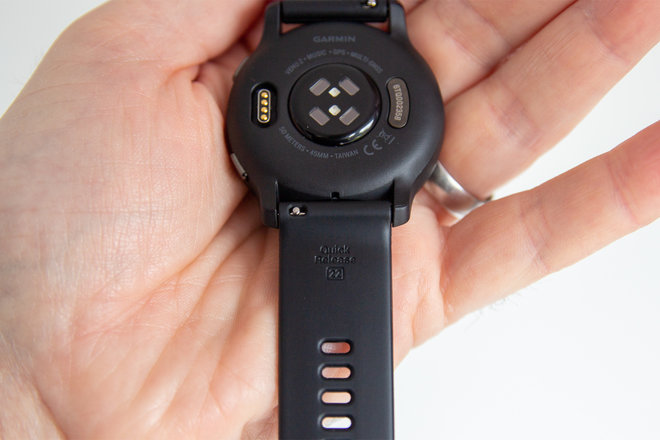 There are two buttons on the right-hand side of the body and these are oblong rather than the round buttons usually found on the Forerunner models.

We don’t have the exact figures on for the display at the time of writing, but on the 45mm model, it’s about 33mm in diameter for the visible area (the same as the Vivoactive 4).

There’s some bezel area under the glass that’s not active display, but Garmin has now added some markers on this area which help to disguise the fact that not the entire area is display. Fortunately, because this is AMOLED, the deep black of the display and that surrounding area merge together so you really don’t notice it – or we haven’t so far. 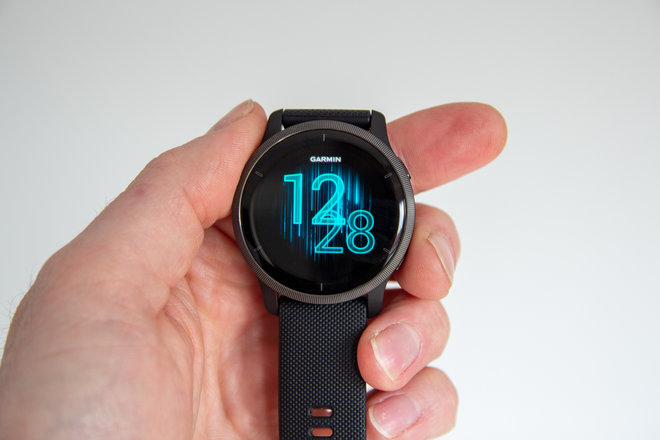 There are plenty of watch faces on the device and many more available through Connect IQ, but we were quickly taken by the Matrix-style face.

There are three brightness levels and it doesn’t appear that there’s any sort of ambient light sensor to adjust the levels automatically. If you choose the top brightness you’ll get a warning that this will drain the battery faster – and it’s the display that’s likely to eat most of the battery life on your Garmin.

It’s a touchscreen display, allowing some interaction, while other functions will need the press of one of the two body buttons.

There’s a battery saving mode that will take you to a simple watch face to save power and also drop the brightness – again underlining the point that this display does have a hit on this watch’s endurance. 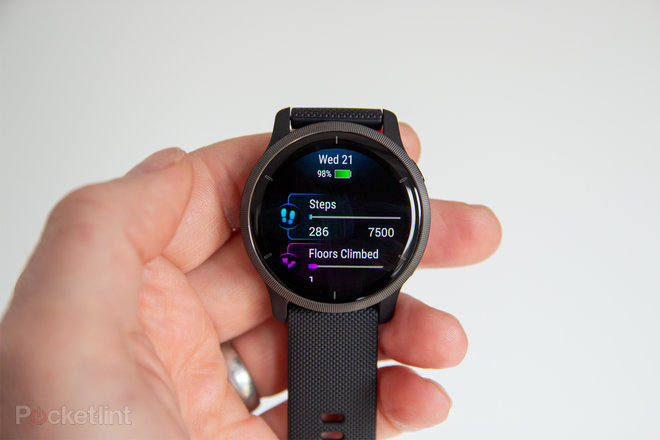 Of course, that’s something we really need to examine in more depth over the coming weeks. Garmin says you’ll get 11 days in battery saver mode, while 10 minutes charging will give 1 day of life – but we’ll be fully testing the realistic battery life. So far it looks like it will be good for 5 days based on wearing it so far.

There is the option for the screen to be always-on, but you’d have to select that. The default is to have the display fade to black fairly quickly, but to waken when you twist it to look at it.

Despite pitching this watch as a smartwatch, the Venu 2 is loaded with all the sensors to feed Garmin’s data machine. That will keep track of your activities from your steps to your HIIT workouts, and give you loads of information about what happened.

The mainstay is the heart rate sensor, which can keep track of your heart rate through the day and night to give you a complete picture of what’s happening within your body. It will help you get in the zone when you’re working out, it will help spot when you’re stressed and it will also measure blood oxygen levels – although be warned that this demands a lot of battery life, so probably isn’t worth the sacrifice. 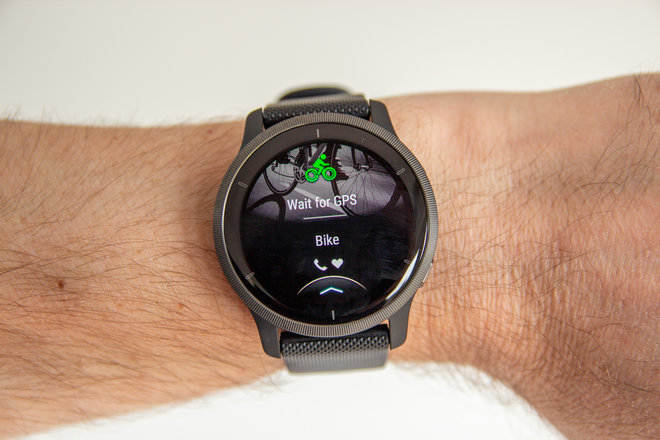 GPS provides your location for accurate route tracing, so you know how far and how fast you went, for tracking all your outdoor activities. The accelerometer will detect motion, like steps or sleep movements, the barometer can detect altitude change while the compass can sense which direction you’re moving in.

All the data collected feeds a number of systems, like Body Battery which pitches your sleep against your daily activity to advise you about how well rested you are, while also giving you full breakdowns of your activity in the Garmin Connect smartphone app, so you know what you did and what benefit that will have. 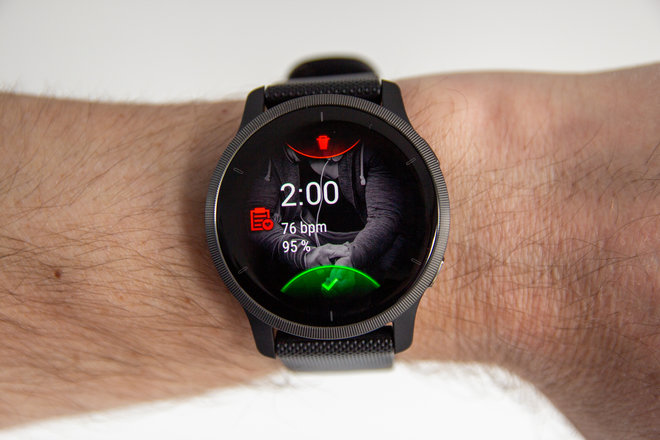 New in this device are sleep scores and insights from Firstbeat Analytics as well as fitness age, which draws in a lot of information to estimate your age – or the impact that your lifestyle might have had on your body and make suggestions so you can do something about it.

They support a full selection of sports, but we’ve not had the chance to test them yet as we’ve only just strapped this watch on. There’s wider support for HIIT workouts and strength training – two areas that Garmin hasn’t been so great on in the past.

We’ll be testing all the functions in the coming weeks.

Garmin offers a range of features are less sporty and more smartwatchy. These aren’t new or unique to the Venu 2, indeed most have been refined across top Forerunner and Fenix models over the years.

But these do complete the picture and ensure that you’re not missing out on essentials. There’s support for downloaded music from Spotify, Deezer or Amazon Music, letting you sync up to 650 tracks, an increase over the previous Venu model.

That means you can arrange playlists and have them sync to your watch, so you can listen to music phone-free via Bluetooth headphones. You can also control music you might have on your phone. 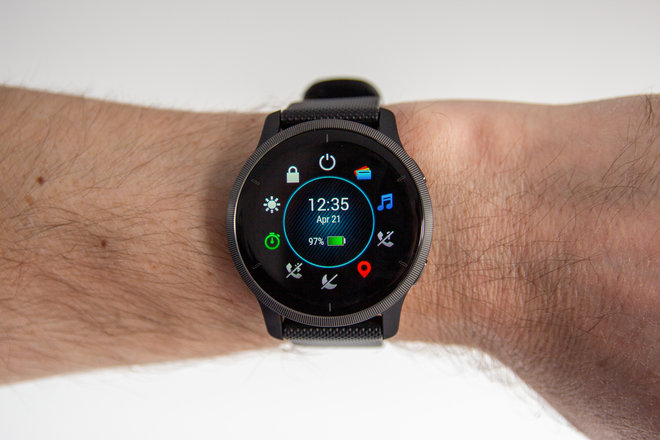 Garmin Pay allows for mobile payments, so you can pay for that coffee on your way home from a long run – although there’s not a wide range of support for banks outside the US – so it’s worth checking to see if you’ll be able to use your card.

We’ve mentioned Garmin Connect a couple of times already and once setup on your phone, you’ll be able to control notifications on your watch so you can stay informed – and those using an Android phone will be able to use Quick Replies to reply to messages too.

Much of this will be familiar to Garmin users, but the Venu 2 does use some custom graphics and animations that are a little more exciting that you’ll find elsewhere. That makes better use of the display and while we’ve not had a chance to fully explore everything, we’ve already spotted some areas where the Venu 2 looks better than some other Garmin devices.