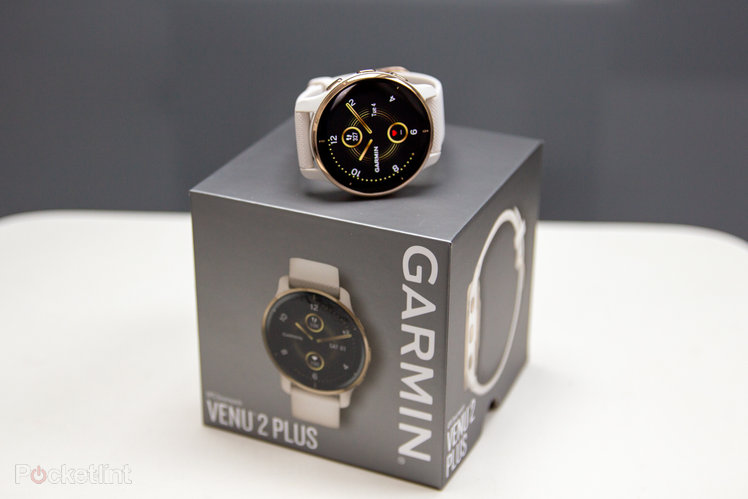 Garmin has moved fast to offer this new version of the Venu 2 – the Venu 2 Plus. Having launched the original Venu 2 model in 2021, this model isn’t a complete repositioning of the Venu 2, instead focusing on adding new support – voice.

The aim is to make this a better connected device, a better rival to WearOS or Apple Watch devices, letting it do a little more.

We got a first look at the new watch – which has just been announced – and will be bringing you a fuller review as soon as we can.

The design of the Garmin Venu 2 Plus will be instantly familiar, because it’s similar to previous Venu devices and not too far removed from the design of other touchscreen devices, namely the Garmin Vivoactive.

There are three buttons on the right-hand side of the body and like most other Garmin devices, it pairs a fibre-reinforced polymer body with more premium materials for the back and the bezel. 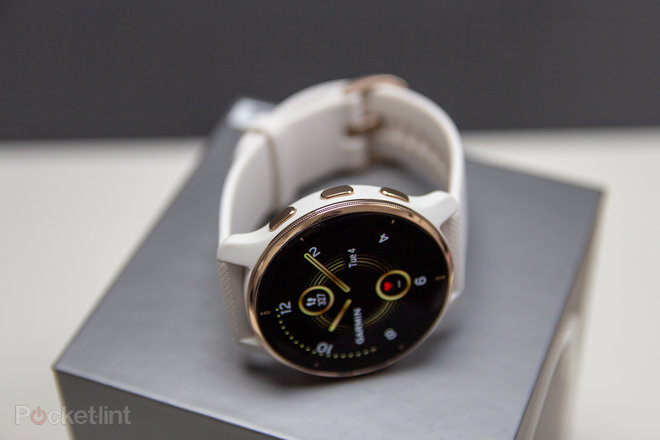 This helps give the Venu a superior look, avoids damage around the edge of the display and ensures that it feels nice to wear. Here it offers stainless steel, with three colour options. Pictured is the white and gold version (Cream Gold with Ivory); it’s also available in Powder Grey or Black.

The new model comes in 43mm case sizing, with the Venu 2 offering both 40 and 45mm in the existing version. This seems to be a model to fit between the two, perhaps a sign that Garmin is going to settle on one size rather than having a small and large offering going forwards. 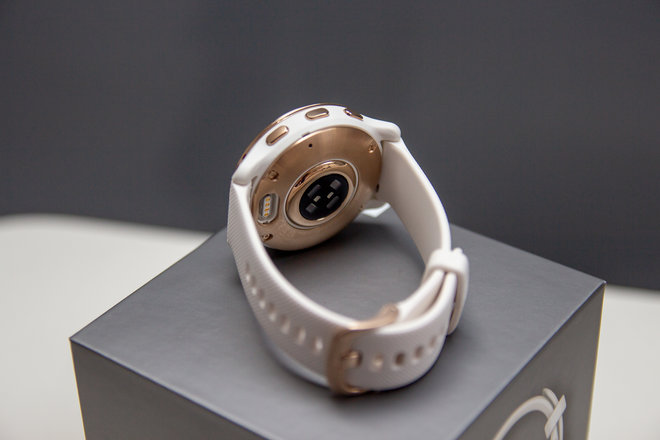 The strap is 20mm and quick release, so you’ll be able to swap it out easily enough to change the style of the watch, from sporty to more formal – or just to change the colour.

There’s 5 ATM waterproofing – 50m – while the face of the watch is protected by Corning Gorilla Glass 3.

It’s all about the display

The Venu is all about its display. This is the thing that really makes it stand apart from the other devices in Garmin’s range.

The 416 x 416 pixel resolution display is AMOLED, offering a much brighter and colourful presentation than you’ll get from a Forerunner or Fenix. The graphics change slightly for the Venu to stand it apart from the other sports devices that Garmin offers and draw more attention to its display. 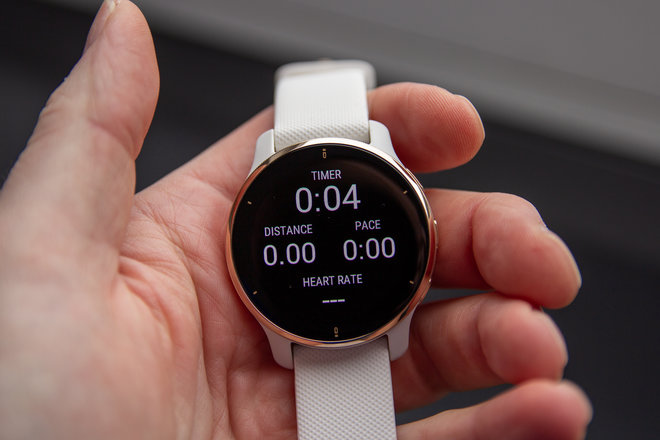 There’s also a switch to touchscreen operation for a range of functions. Most Garmin device rely on the buttons for control and navigation: here you have an either/or operation – and sometimes both.

The important thing is that when you’re in an activity, you can still use the buttons for things like stopping and starting, as well as selecting things and laps, but other elements work better via touch. In some ways the user interface is a bit of a mash-up between what you’ll find elsewhere on Garmin’s devices, and a few tweaks to accommodate touch. 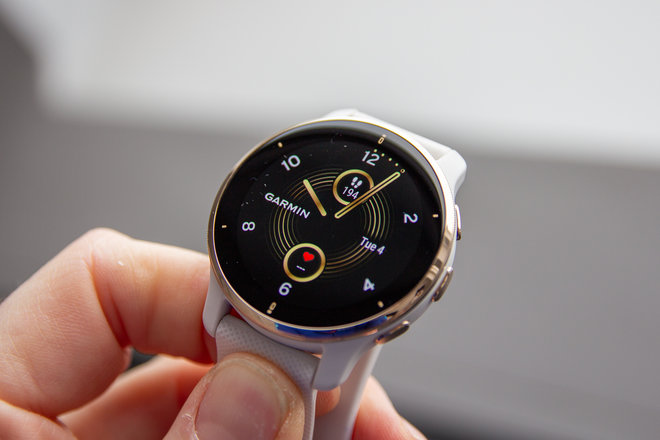 It is very much like the Vivoactive in that sense and doesn’t really take things as far as the Apple Watch when it comes to fluid touch functionality on the small screen. We haven’t had long enough with the Venu 2 Plus to fully assess its performance yet, but we’ll update as soon as we can.

The big new addition on for the Venu 2 Plus is voice support. This is something that Apple and Google have naturally supported within their own ecosystems, with third-party devices often being left out.

There are two sides to the new additions. The first is the ability to make calls. This isn’t entirely new – Garmin devices have for a long time told you when someone is calling and allowed you to accept or reject those calls – but now you can initiate calls. 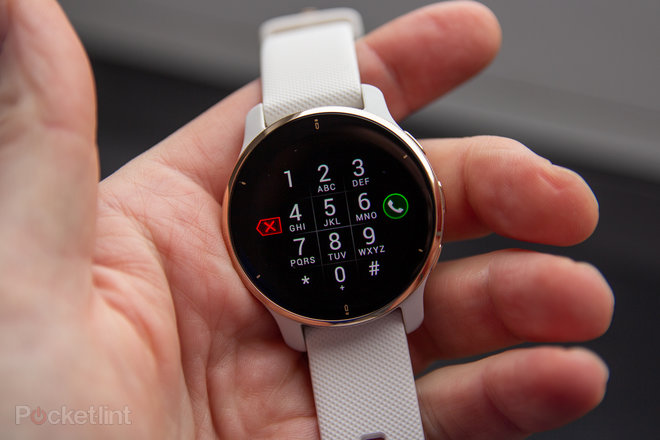 You’ll be able to do this via a dial pad on the watch itself, or through synced contacts, so you can place those calls. You’ll need to be connected to a smartphone – there’s no cellular connectivity – but this does open up a range of options.

As we’ve only had a short time with the Venu 2 Plus we’ve not fully explored all the offerings, so will update shortly once we know exactly how it all works.

The second side of the equation is supporting smart assistants on your phone. If you’re an Apple user this will be Siri, while on Android devices it will be Google Assistant. For those using a Samsung phone, there’s also support for Bixby, but there’s no mention of Alexa support, most likely because it’s not a native smartphone function. 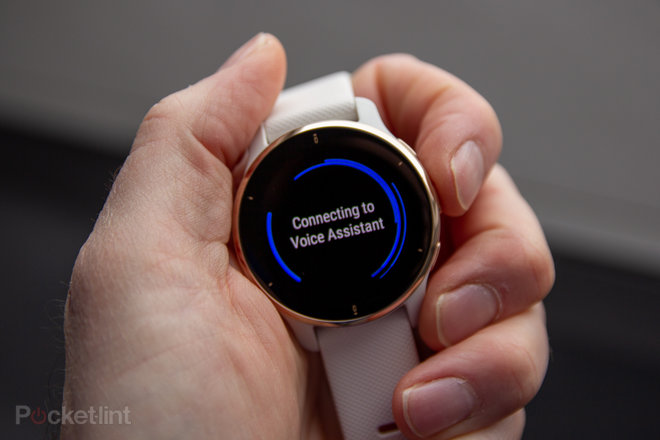 You’ll be able to fire up your smart assistant through your watch, so you can then just speak to your Venu 2 Plus and get Siri or Google to do whatever you want – turn on the heating, etc, etc.

Again, we’ve not fully explored these new functions, but we’ll update with how well they work as soon as we can, but integral to these options are the integrated microphone and speaker on the Venu 2 Plus.

All the sports support you expect

As is normal for Garmin devices, the Venu 2 Plus is loaded with sensor to track what you’re doing and how you’re doing it.

That covers the normal GPS, accelerometers, compass, barometric altimeter and heart rate sensor, so your watch knows what you’re doing, where and the stresses it is putting on your body.

It’s compatible with third-party sensor if you want more data and there’s support for a wide range of sports so you can get the information you want on the display whether you’re running, cycling, stand-up paddleboarding or in a yoga session. 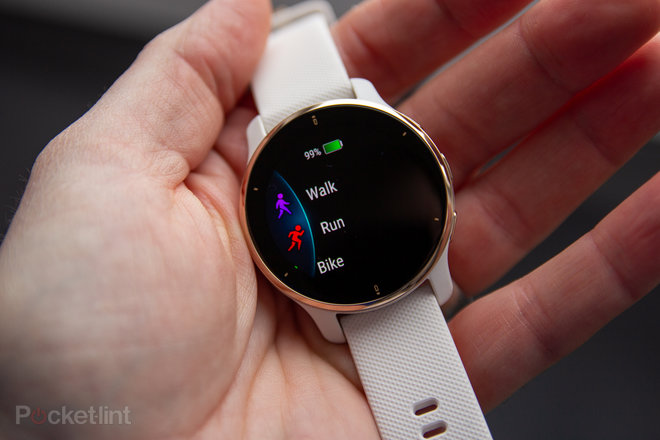 Garmin wants to look after a lot more than just your workouts: it will detect steps and floors climbed, offer to track your hydration and track your sleep. It will also offer period and pregnancy tracking for women.

The aim it to be a complete view of your lifestyle, offsetting your exercise against your sleep to track your recovery, helping you set goals and achieve them and be a daily companion in your quest to stay active.

We’ll be putting the watch through its paces and updating with a closer look at its overall performance in sports tracking in the near future. 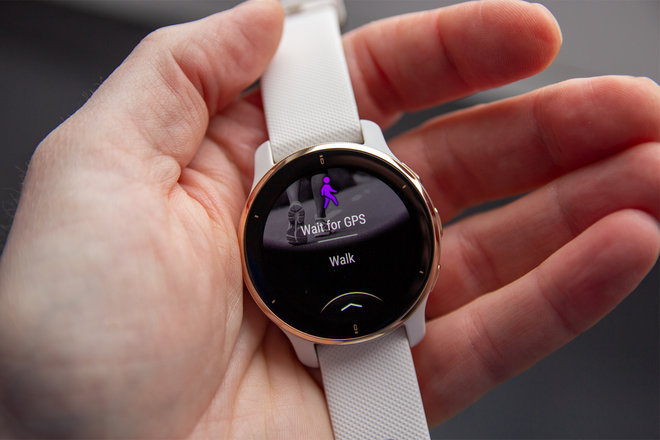 Garmin says that you’ll get 9 days of battery life from the Venu 2 Plus – and we’ll also be putting that to the test.

The Venu 2 Plus also supports Garmin Pay for mobile payments, and music from the likes of Spotify, Deezer or Amazon Music so you can listen offline through connected headphones.