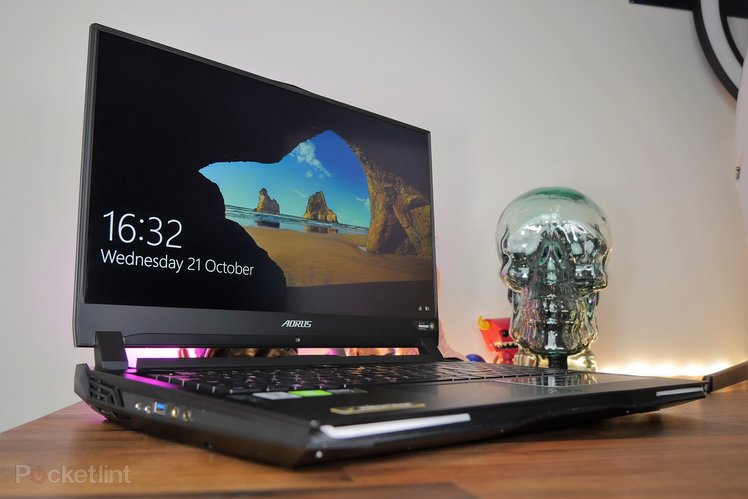 The Aorus 17X is an extreme gaming laptop – think desktop replacement – meaning it can do everything a serious gaming machine can, but is also portable.

As you might have gathered from the price tag, the Aorus 17X is a monster of a gaming machine with some serious power under the hood. It’s also designed to be useful in other ways outside of gaming too. It can output to multiple monitors, but also works well on its own thanks to that 17.3-inch display.

The Aorus 17X is essentially the more extreme brother of the Aorus 15G (that we’ve reviewed before). As such, it’s a more powerful gaming laptop with more to offer, not least of which is a larger screen with 240Hz refresh rate and 3ms response time. 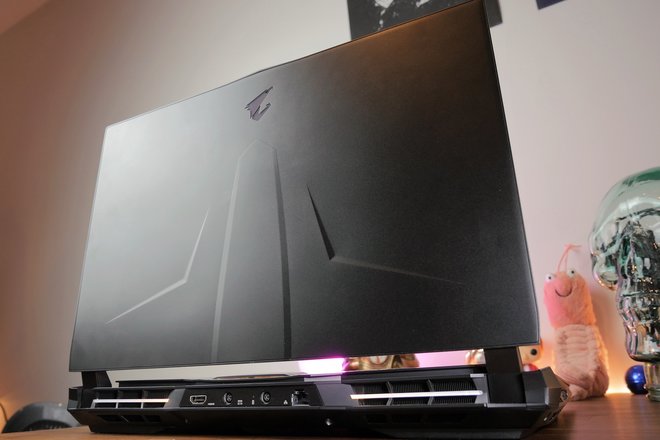 Under the hood, the 17X packs the latest and greatest high-end Core i9 processor from Intel, Nvidia RTX 2080 Super GPU, and pleasing amounts of RAM and storage too.

Of course, as a desktop replacement, it’s crafted to offer everything you’d want from a dedicated gaming machine, while still boasting a portable chassis.

In fact, the Aorus 17X is designed specifically with pro gamers in mind. That’s why it has such serious specs, making it capable of not only running games at a high frame-rate but also outputting to three 4K displays and still performing well. Yep, three displays.

We hooked it up to the Samsung Odyssey G9 and ran games at 5200 x 1440 just to make the most of that. It can handle video editing, high-end gaming, streaming and more. It’s a beast.

This laptop has several ports, too, meaning you can connect multiple devices. Mice, keyboards, headsets, VR headsets, the list goes on. There’s an Ethernet port too, with Killer Ethernet E2600 and Wi-Fi 6 AX1650 connectivity, giving you a solid and fast connection – assuming you have decent home broadband.

One downside of the design is the sheer size of this thing. Gigabyte makes a point of saying that the Aorus 17X is one of the lightest desktop replacements out there – weighing in at 3.75kg, gulp – so it’s not lightweight in general, but is contextually speaking.

It also has a chunky frame to house all that tech – which helps keep the innards cool and air passing through – but this means it sits awkwardly on a desk and can be uncomfortable to use at times given the sharp edges jutting out.

That said, this beast is well-built, with a solid aluminium chassis and an eye-pleasing design. It boasts several RGB “atmosphere” zones – including lighting strips along the front and rear and below the centre of the screen which give off a satisfying RGB glow on the surrounding area. We have mixed feelings about these, though, as they’re either pleasing to look at or an unnecessary extra depending on what you’re doing. But you can turn them off using the software.

Another niggle is the webcam setup. It’s located at the bottom of the screen, so you end up giving an unnecessary view of your fingers if you dare to type while on a Zoom call. Not ideal. The capture quality of that camera isn’t great either. So you’ll probably want to invest in a good quality external webcam or something more serious.

This is a gaming laptop first and foremost – and it doesn’t disappoint in that regard if you’re just using it with its own screen. It’s a fast refresh panel after all, and a fairly large and almost bezel-free one at that.

Gaming is glorious and with Pantone Certification, it’s a real looker with accurate colours. The screen looks great from any angle and there are settings that let you easily further tweak the visuals within the software. This includes simple adjustments like being able to turn an eyecare mode on make it easier on the eye for working as well.

As with the Aorus 15G, this laptop uses Microsoft Azure AI tech to automatically adjust power and improve gaming performance to give you the best results. The Aorus Control Center lets you manually adjust and boost power and performance with a couple of clicks, but you can instead let Azure AI do its thing for improved performance with far less fuss. In the real world, this equates to higher frame-rates in games and a more satisfying experience.

We got Assassin’s Creed Odyssey to play at about 70fps maxed out, and Far Cry: New Dawn registered at around 100fps. Other games like Control allowed us to make the most of ray tracing, while Ancestors: The Humankind Odyssey looks the business on this machine.

As we’ve already said, the Aorus 17X is bristling with connection options. A multitude of USB connections, an SD card reader, Ethernet jack, and much more besides.

It also has an ESS Sabre Hi-Fi Audio DAC – meaning if you have the right headphones, you can plug in and enjoy high-end audio (up to 24bit/192KHz).

Which is good newx because you’ll need a headset to block out the noise of the fans. We’re not saying the Aorus 17X is the loudest we’ve seen (or heard, more to the point). In fact, for the most part, it runs fairly quietly until you start to really push things.

The Aorus 17X uses Gigabyte’s Windforce Infinity cooling system – which the company claims is 40 per cent more efficient than the Aorus X9.

Multiple heat pipes allow this machine to nicely dissipate the heat when it’s under load and we were impressed with how this laptop manages just that. It pushes hot air out of the sides and rear in a satisfying, non-obnoxious way.

We’re pleased to report that – unlike the thin-and-light gaming laptops we’ve tested of late – the Aorus 17X manages to keep cool enough to let you game on the lap easily. You can sit on the sofa and enjoy a good gaming session without having your thighs melted, which is certainly a selling point for us.

That said, when you up the power or turn the fans up to max to keep things cool, it quickly becomes a bit too loud. Even with the fans set to standard they eventually ramp up and result in extra fan noise. An odd quirk of this is if you use a keyboard shortcut to turn the fans up, then back down again they immediately quieten down for a while.

However, we are happy to report that the speakers are powerful enough to overpower that noise and let you concentrate on the game itself. We’d still say a gaming headset is a necessary option though.

Like the Gigabyte Aorus 15G, the 17X boasts a satisfying mechanical keyboard with OMRON key switches. An unusual setup for a gaming laptop and something we loved on the smaller 15G and feel equally good about on this more extreme machine.

This design speaks that “pro gamer” vibe that Gigabyte is going for. A low key height design, concentric caps, short actuation distance, and a satisfying click make the keyboard satisfying to work or game on. It’s probably noisier than most laptops you’re used to using, but if you’re a serious gamer, you’ll appreciate the speed and accuracy of this setup.

Not appealing enough? How about some per-key RGB lighting with 19 different possible effects and software that lets you set up macros across the keyboard as well.