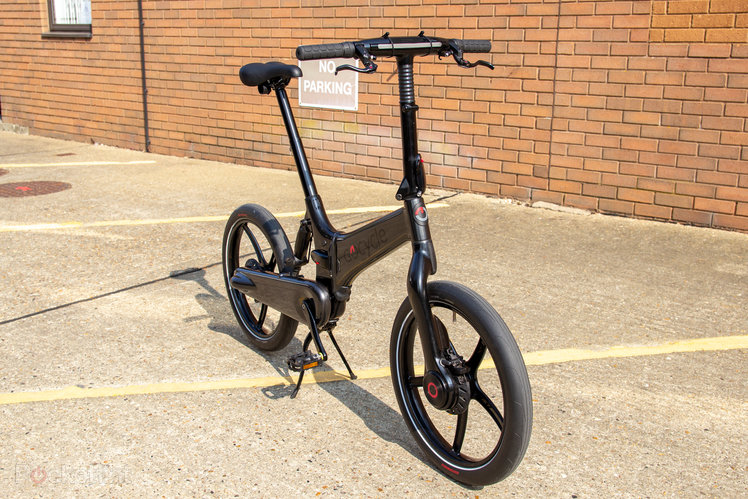 But in a case of blink-and-you’ll-miss-it, you might not spot those changes as first, as the new Gocycle G4i still looks and behaves exactly like the folding electric models that came before it.

We got our hands on a pre-production model of the Gocycle G4i, as well as an introduction to it from Richard Thorpe, founder and managing director of Gocycle at the company headquarters in Surrey, UK.

The Gocycle G4i sits in the middle of the updated model range from Gocycle, with the standard G4 below it and a halo model, the G4i+, sitting above it, although all these models have a lot in common.

The Gocycle G4 has implemented a wide range of changes, many you might not see. The most obvious is the carbon mid-frame, showing off that carbon weave on this G4i model. 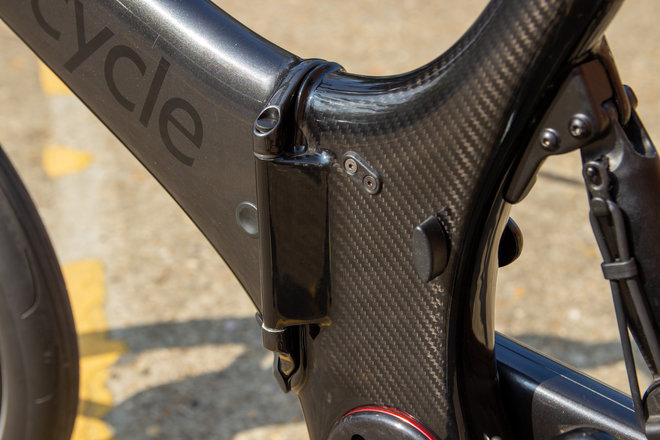 As Richard Thorpe explained to us, it’s a complex part of the bike because you have the main hinge for folding the bike, internal clamps for the seatpost, pivot points to allow articulation of the rear arm of the bike. It is essentially the heart of the bike.

That’s seen another minor change, with the seat clamp bolt switching sides, so when you come to fold the bike, you need to release the seat post before you do the main fold, or you’ll be reaching into the middle of the bike.

One of the most noticeable changes is to the front fork. While the single-sided approach isn’t new, the design is quite different to previous Gocycle models. It’s a carbon fork, but again it does more than just support the front wheel, because it also houses the motor controller and indeed the new motor in the front hub. 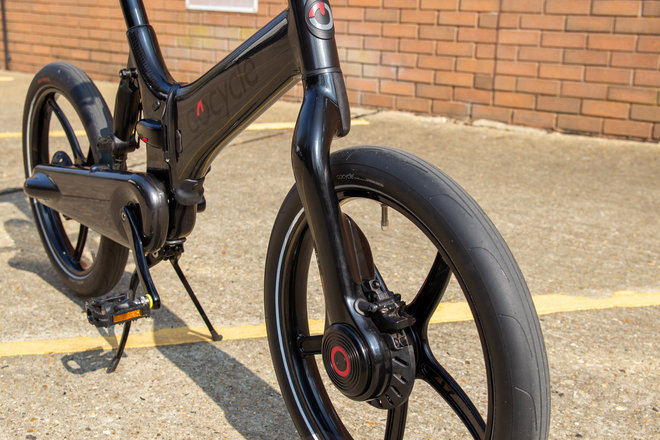 You’ll see that the old rubber boot used at the top of the fork has been replaced with a more substantial plastic body, which can now be easily removed when the lights are fitted. The motor controller also sits in a section further down which can be accessed for servicing.

Together, these changes make for a cleaner look to the front end and are likely to prove popular with Gocycle dealers when it comes to servicing or repairs, while leaving owners with a bike that looks better.

The Gocycle G4i has height adjustment for the handlebars and there’s a small addition here too – a USB socket so you can charge your phone from your bike. That’s in addition to the LED interface to provide visual feedback and the built-in daytime running light across the front.

It’s all about the new motor

There’s a new motor on the G4 models and this makes a surprising difference to the riding experience, based on our very limited experience on this pre-production model. Firstly, the motor looks more compact and slightly more refined than the previous version on the G3 models, again cleaning up the front end.

The new motor has been designed to be quieter and activate more quickly. On the Gocycle you start pedalling and the motor will kick in to provide a benefit, pulling you along. On the G4 that happens sooner, it’s a more immediate activation, with better low end torque. 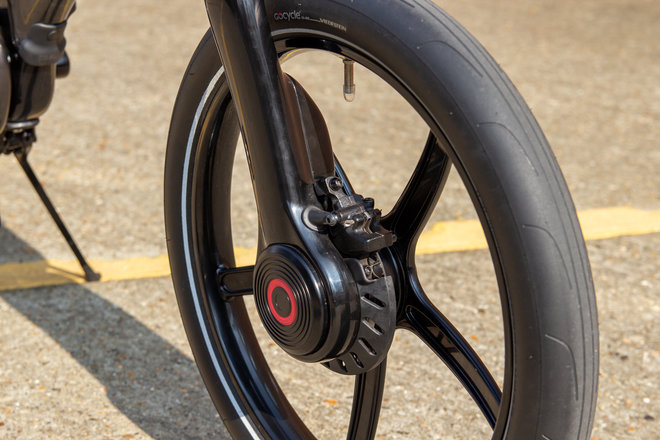 That results in faster speed off-the-line, not so that you’ll feel out of control, but so things are a little more effortless. On the flat that’s a minor thing, something that will be appreciated in stop-start urban riding – but it’s also going to be a real benefit for those tackling hills. Setting off uphill will now be easier.

The boosted low end torque also makes a relatively unknown Gocycle feature more important – traction control. We’ve ridden a number of Gocycle models and never thought about traction control, but as Richard Thorpe demonstrated to us, it’s easier to see it working with the increased torque from that new motor. Again, it’s one of those features that is there in the background, improving the experience should you find yourself on loose surfaces. 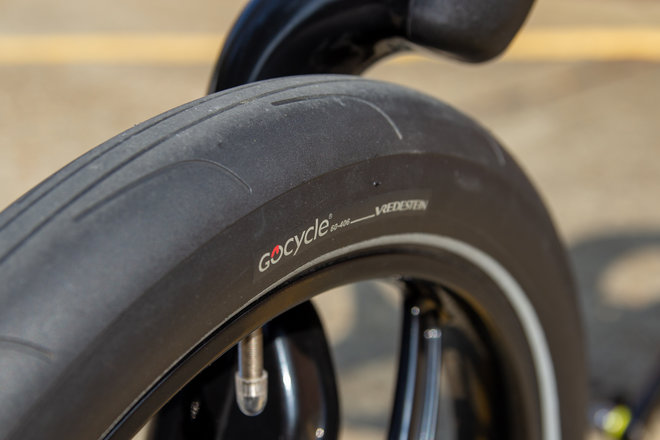 The Gocycle G4 introduces new tyres too, with silica compounds for increased grip. The new tyres also have an increased volume which could give a softer ride, although we’ve not had the time to experience that in our short ride so far.

We’ve always liked the ride that the Gocycle offers. It’s clearly a bike that suited to commuting, with the convenience of that folding action meaning its easy to store at home or in your office without taking up loads of space.

The small wheels, articulation of that rear arm and the CleanDrive meaning there’s nothing to catch on your clothing, nothing to clean, much less to maintain.

It’s also fun to ride, simple compared to regular bikes because of the big reduction in gearing, with the motor assistance removing the need for a huge block of gears.

It still has gears, however, and on the Gocycle G4i these offer electric shifting and predictive shifting. Yes, you don’t really have to think about them at all.

The electronic shifting means you can move up and down with a small twist of the grip shifter – and the experience of this is so far removed from wire-based grip shifters it’s a totally different thing. It’s smooth and easy to do, meaning you can shift up easily as you get going. 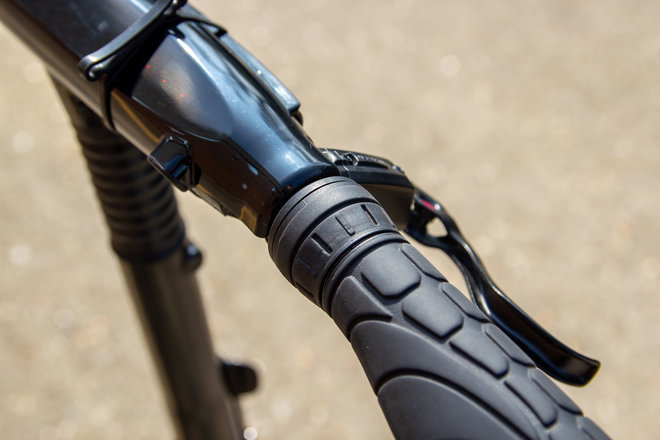 Predictive shifting helps automate the process too, which has a real benefit when you slow down and stop. The bike will shift back down again so you’re in a low gear ready to pull away again with minimal effort. While we didn’t have the chance to test this on the new G4i, we’ve used the predictive shifting on the Gocycle G3 in the past and found it really useful.

The G4i will also have the larger battery with 375Wh and fast charging, said to be good for 50 miles of range.