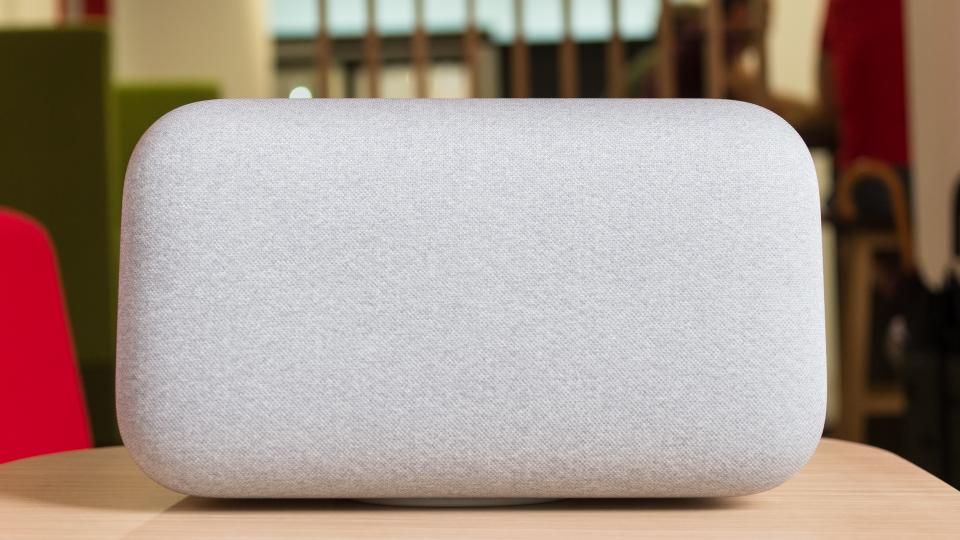 Big and bold, the Google Home Max is a beast of a smart speaker – and now it’s a fair bit cheaper

DEAL: Save £100 on the Google Home Max for Black Friday

As part of the Currys Black Friday sale, you can save a whopping £100 on the Google Home Max, making it £199. With amazing smart features and the option for 3.5mm playback, this is an excellent compact, high-end speaker.CurrysWas £299Now £199Buy Now

First announced at Google’s Pixel 2 launch event back in November 2017, the Google Home Max has been around for a quite a while now but it’s still a good option if you like your smart speaker to produce a big, bombastic sound. It’s better value now than it was at launch, too, having dropped permanently from its original £399 price to £299.

Google Home Max review: What you need to know

The Google Home Max is Google’s high-end smart speaker, designed for people who want all the benefits of Google Assistant but don’t care to compromise on sound quality.

In effect, Google wants this to be the smart speaker people use as their main home hi-fi speaker. It’s not designed as portable speaker – there’s no battery inside and it’s not waterproof – but it is flexible in terms of how you connect to it, with voice control, Wi-Fi support, Bluetooth and 3.5mm analogue input connectivity.

The Google Home Max is a premium smart speaker and, as such, it’s more expensive than the smaller, more basic Home and Home Mini speakers. It’s a lot cheaper today than it was when it first launched – at £299 it has had £100 knocked off the price – but that’s still more expensive than most of its big rivals.

The Apple HomePod is now £199 at most retailers; it’s smaller but sounds amazing and the Amazon Echo Studio is also considerably cheaper. Again it’s not as beefy as the Home Max but it’s very impressive for its relatively small size.

There’s also a whole selection of third-party smart speakers that are cheaper than the Home Max. The UE Megablast, for instance, costs around £150, sounds superb, works with Amazon Alexa, and is battery powered and water-resistant, too. Alternatively, if you’re interested in sound quality over smarts, the KEF LSX are worth considering, too, although they cost a cool £1,000.

It starts off well. Build and design quality is every bit as good as you’d expect for this sort of money. It’s extraordinarily solidly put together and weighs a substantial 5.3kg. Give it a rap with your knuckles and it sounds satisfyingly tight and resonance-free, just like a top-quality speaker should.

In terms of appearance, the Max is pleasingly familiar – like Google shot a Home Mini with a grow gun and flattened the sides – although not everyone will love its cutesy looks. Grey cloth covers the drivers, here facing forwards instead of up, while the rest of the body is made of tough, white, soft-touch plastic.

Four circular LED dots lurk beneath the cloth grille on the front of the speaker, indicating various statuses, lighting up when the speaker is listening to you and showing volume levels when you make adjustments. A touch-sensitive area on top of the speaker allows you to do just that, sliding your finger right and left to increase or reduce the volume and tapping it to pause and play. 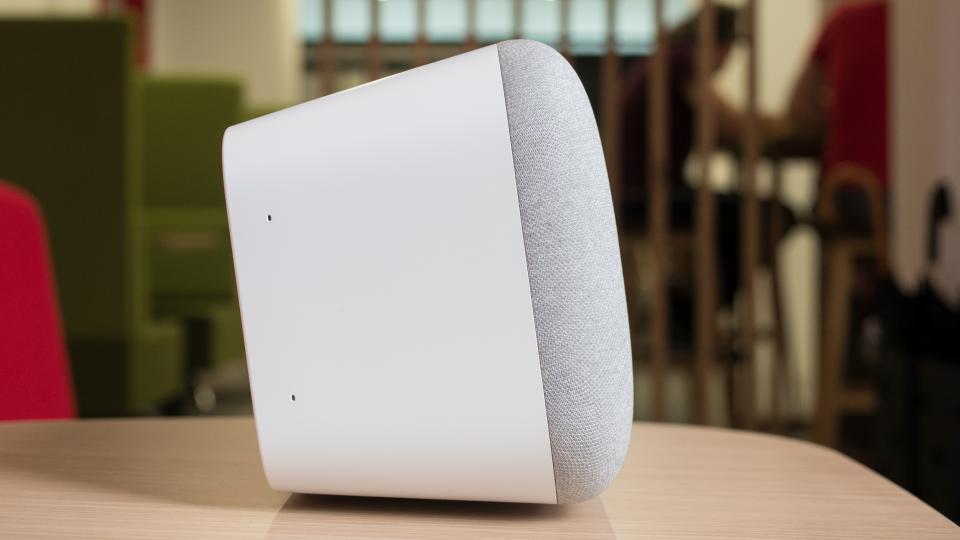 At the rear, meanwhile, is a switch for muting the microphone and a small cutout hosting the speaker’s various connections: a figure-of-eight mains port, a 3.5mm audio input and a USB Type-C socket. The latter is used not for audio, disappointingly, but for connecting an Ethernet adapter (not included) in case you’re having problems with Wi-Fi connectivity.

So far so good; what I’m not so keen on is the magnetic rubber pad that comes loose in the box. This is designed to be placed beneath the speaker to isolate surfaces it’s sat on from vibrations, but it’s just a bit of a fiddle if you’re moving the speaker around.

Still, the Home Max is at least reasonably flexible when it comes to connectivity. In addition to Wi-Fi, it’s also possible to play music to the speaker via 3.5mm analogue and Bluetooth. To achieve the latter, you have to first put the speaker into pairing mode via the Google Home app though, which is a bit of a faff, and there’s no support for the more advanced Bluetooth codec, aptX. 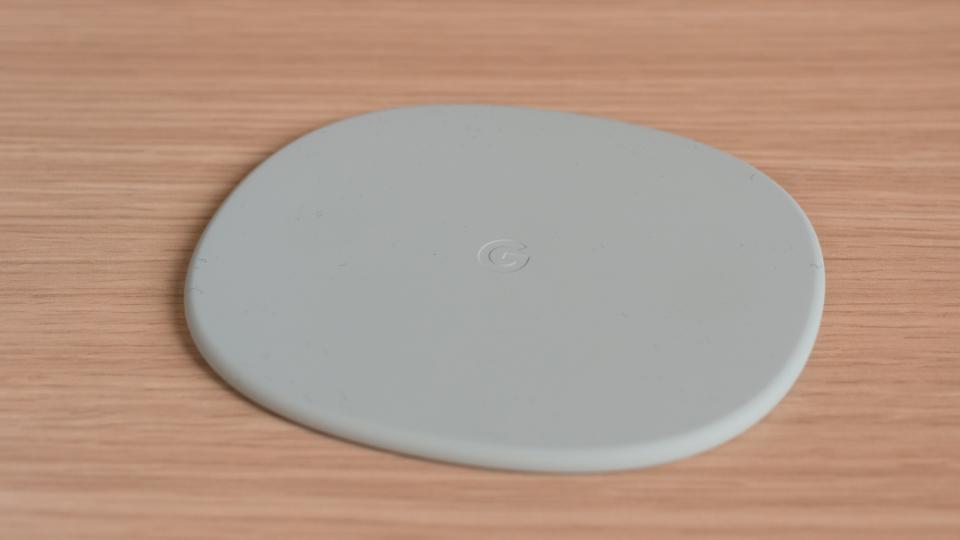 There’s not much to say about the Google Home Max’s digital assistant features, other than it works pretty much the same as on the Google Home and Home Mini. Via Google Assistant, you can use your voice to ask the Home Max to play music and radio; set up timers, reminders and calendar entries; and ask questions about the weather and various other trivia.

There’s nothing new here, but Google Assistant is excellent. It’s generally better than Amazon’s Alexa or Apple’s Siri at recognising the things you ask, and it’s much more likely to give you a cogent response to a random trivia question. Assistant on the Home Max supports up to five different voices, so it can recognise who’s asking it to play music and tailor its recommendations accordingly. It’s worth bearing in mind that Amazon’s Alexa remains more widely supported by hardware manufacturers, however.

Assistant is pretty good, though, when it comes to the number of music and radio services it supports. It’s on par with Alexa here and beats the Apple HomePod roundly. With Apple’s smart speaker you’re pretty much restricted to Apple Music if you want to search for music or podcasts by voice and there’s very little support for radio. 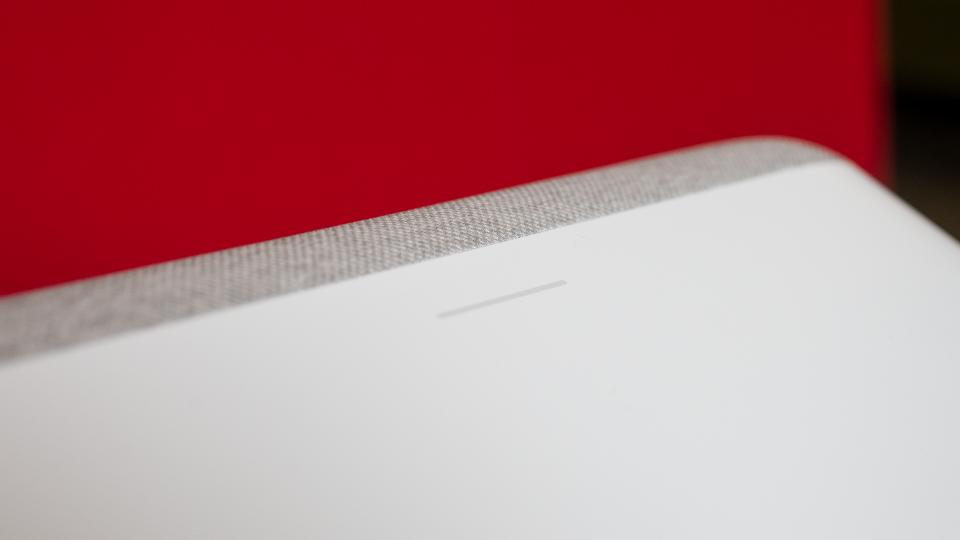 The Home Max supports voice search, control and playback via Google Play Music, Spotify (Premium and free), Deezer and YouTube Premium. Radio playback comes via TuneIn and iHeartRadio, while podcasts are played via Google’s own library. There’s no synchronisation between progress on the speaker and your phone, though, which is slightly annoying.

What the Home Max isn’t so hot on is far-field voice detection. The speaker uses an array of six microphones to pick up voice instructions, and it’s reasonably good at doing so across the room with moderate background noise. I found, however, that I needed to raise my voice with it more often than with the Apple HomePod or any of the Echo speakers I’ve tested. With the music turned up beyond 60%, you practically have to shout “OK Google” to get a response.

That’s not the only thing the Max uses its microphones for, though. Like the Apple HomePod, Google Home Max uses them to sense its surroundings and adapt the sound output automatically. Called Smart Sound, the idea is to avoid the boomy bass caused by placing speakers close to walls and in corners, or the lean, bass-light sound you can get from a speaker in a large, open space. 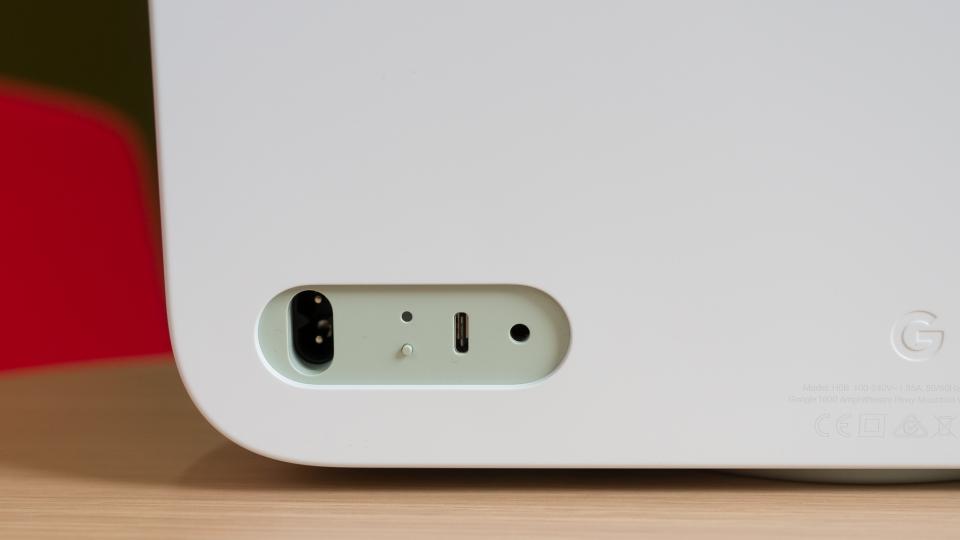 With the HomePod, you can clearly hear this working as you move the speaker from location to location, but with Google Home Max I couldn’t hear any kind of noticeable change. When I moved the speaker deep into a corner, the bass sounded stronger than with the speaker out in the open, although not overly so. Google’s adaptations, assuming they’re happening at all, are clearly more subtle than Apple’s.

So, how does the Google Home Max sound? In a word: loud. This is one beefy speaker, capable of filling medium to large domestic spaces and pumping up the volume enough to kick out house-party levels of volume without distorting.

Behind the grille at the front is a pair of 4.5in, high-excursion woofers accompanied by a pair of tweeters. This combination provides controlled, deep bass and a wonderfully rich lower-mid range. I like the sound this speaker produces. It’s punchy, it’s not overly bassy, and there’s plenty of control at the low end. It’s a great speaker for listening to Kraftwerk, which in my book is a very good thing. 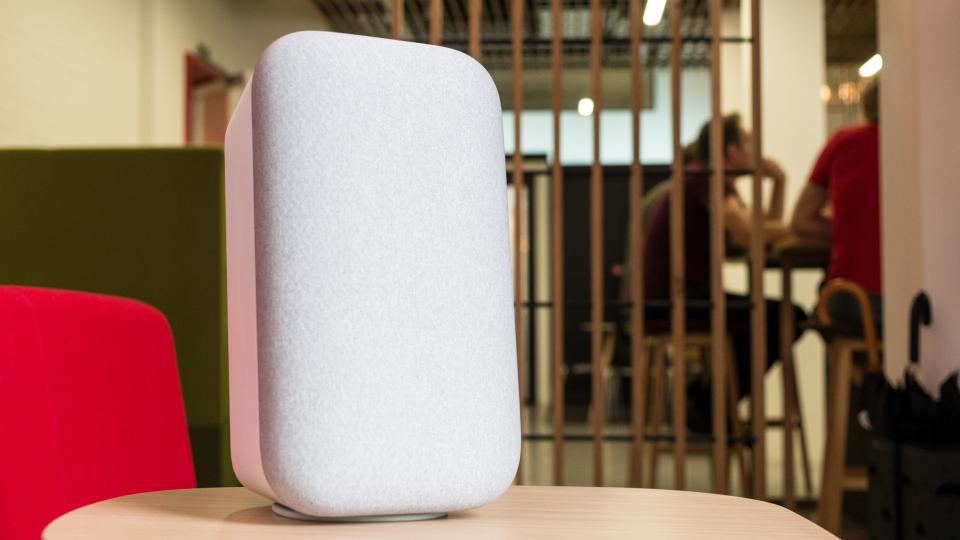 Whether you have the speaker laid on its side or up on end, it also suffers from a disturbing lack of width in the soundstage. Close your eyes and all sound appears to emanate from a narrow channel directly in front of you. In comparison, the Apple HomePod has a far wider, deeper soundstage and, while far from perfect, is more engaging and fun to listen to at quieter volume levels.

Things do improve if you add a second Home Max and set them up in stereo pairing mode – which is remarkably easy to do within the Google Home app – but that ups the price to a rather steep £800. For that sort of money, I’d be thinking about buying a pair of decent active speakers and perhaps pairing with a Google Home Mini for smart features instead.

Despite these weaknesses, the Google Home Max is the best all-rounder of the smart speakers produced by the big three: Google, Amazon and Apple. It’s the most flexible in terms of its connectivity; its digital assistant works extremely effectively; and there’s a good balance between the music services and devices it supports and its sound quality.

It’s a great product, no doubt, but the problem here is the price. At £400, it’s by far the most expensive of the big three’s smart speakers and, for me, it doesn’t quite justify that premium. 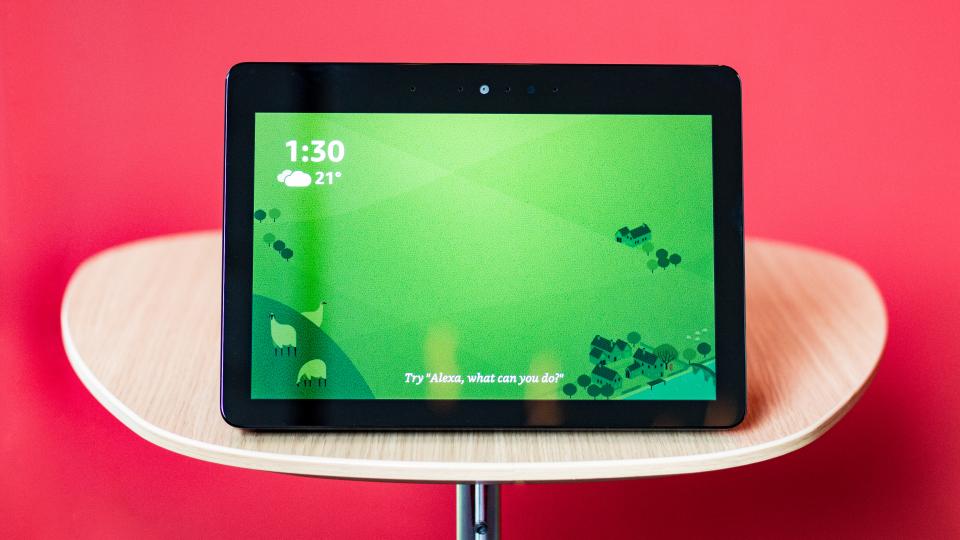 It’s not as big or beefy as the Google Home Max but Amazon’s 2018 Echo Show is a lot better than its predecessor when it comes to sound quality. Plus, its 10.1in display adds an extra dimension over Google’s voice-only Home Max. 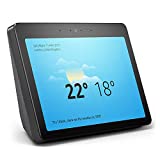 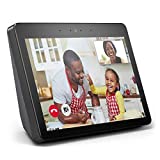 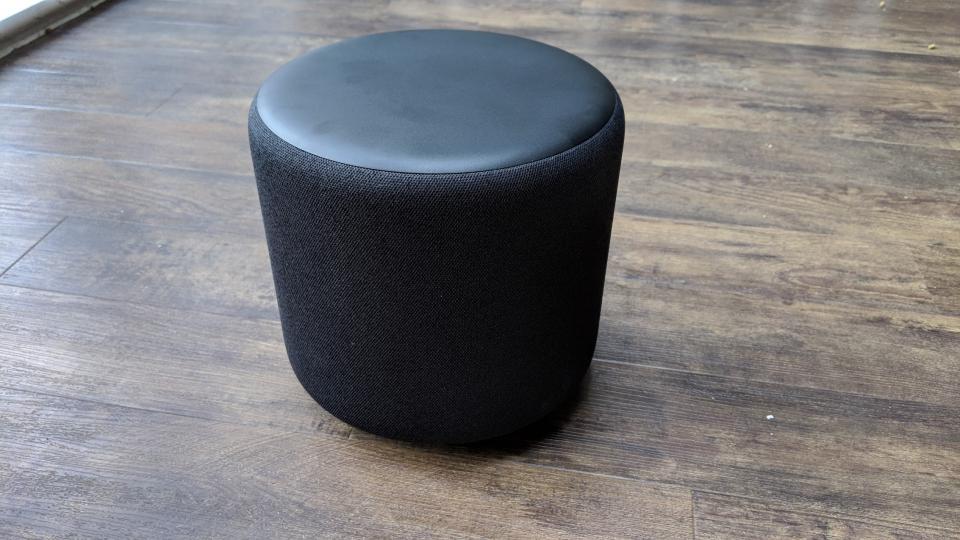 The Amazon Echo Sub is an oddity in the smart speaker world. In and of itself, it’s useless; it’s only when you pair it with one or more Echo speakers that it comes to life, adding extra body, weight and deep bass to what has always been a more lightweight speaker.

Most impressively, perhaps, if you buy a sub with two Echo Plus 2 speakers, allowing you to run a full stereo smart speaker audio system, you can currently purchase the whole package for only £299. 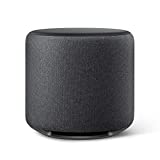 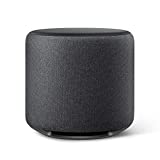 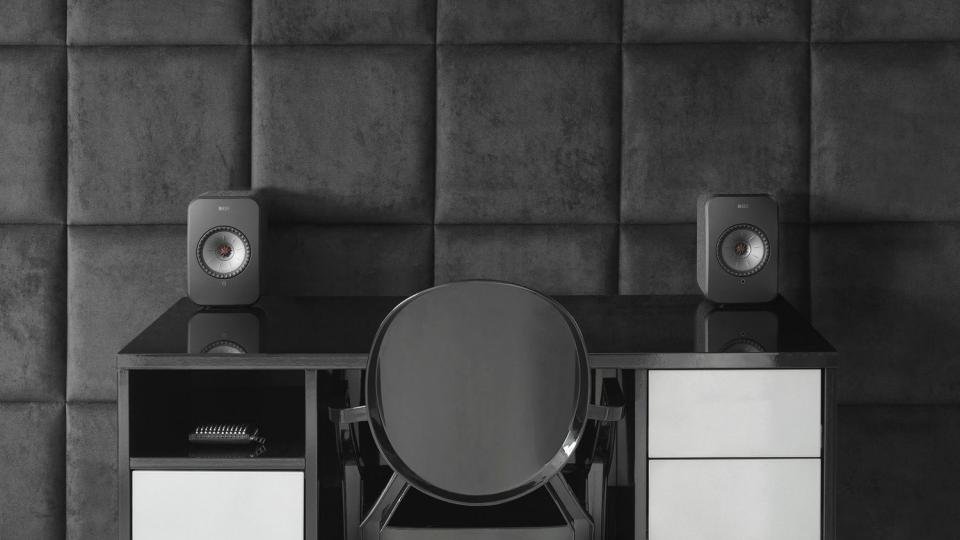 If sound quality’s more your thing, then it’s also worth considering the stupendously good KEF LSX, which aren’t smart but do sound utterly wonderful. They’re smaller and more compact than the Google Home Max, sound much more sophisticated for music and they look pretty natty as well. We tested them in the green, but you can buy them in blue, black, red and white as well and all but the white version come with a textured fabric wrapping that really sets them apart from the competition.

They’re wireless, supporting both Wi-Fi and Bluetooth connectivity (including aptX) and you can also plug in via 3.5mm cable and optical S/PDIF for legacy devices. The only caveat? They’re rather expensive at £1,000. But that’s half the price of the LSX’s £2,000 big brother, the KEF LS50 Wireless.