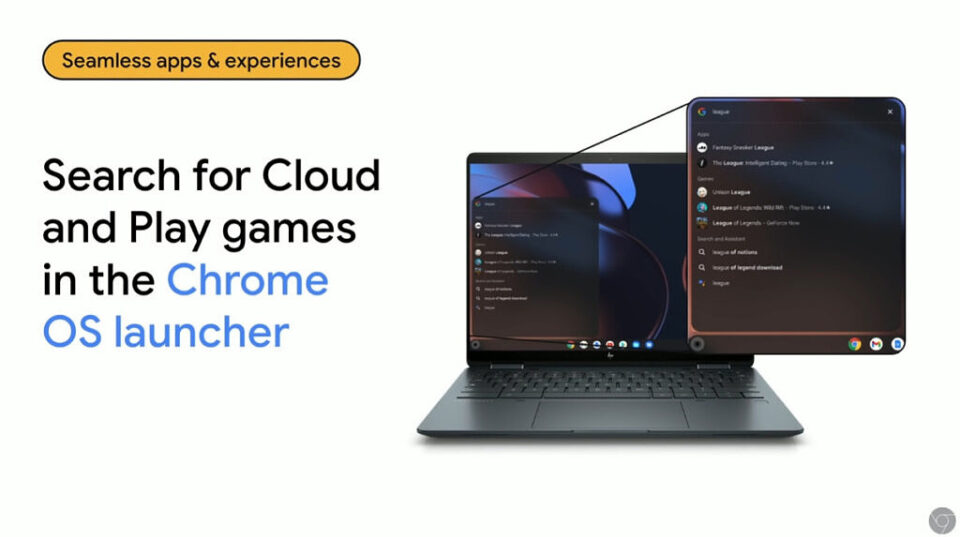 Google I/O isn’t all about new phones and smartwatches, it’s a developer conference, after all. So that means software gets its fair share of attention, including Chrome OS. Google has detailed some of the features coming to Chromebooks in the near future, with a number of quality of life improvements heading our way.

Some were debuted in the big day one keynote, like being able to stream messaging apps from your Android 13 smartphone. You’ll also be able to integrate your phone’s camera roll into your Chromebook, being able to pull up all recent photos through the Phone Hub. But there’s much more than that coming down the line. Fast Pair will also see full integration into Chrome OS, for that one-tap connection to supported wireless accessories. 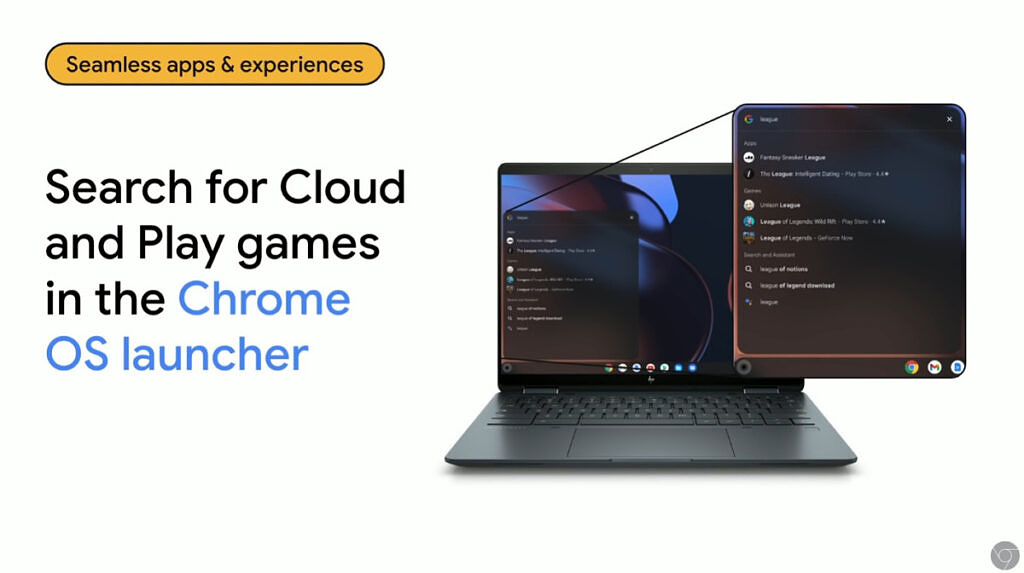 Apps and how they’re handled are a big focus, it seems, and we’ve already been able to see the first stages of this. The new app launcher is no longer a full-screen monstrosity, instead limiting itself to the bottom left-hand corner in a more traditional desktop-like approach. Additionally, the Chrome OS launcher will soon have integrated game search for both cloud games and Google Play games. If you haven’t tried it yet you can enable it with the #productivity-launcher flag on your Chromebook. 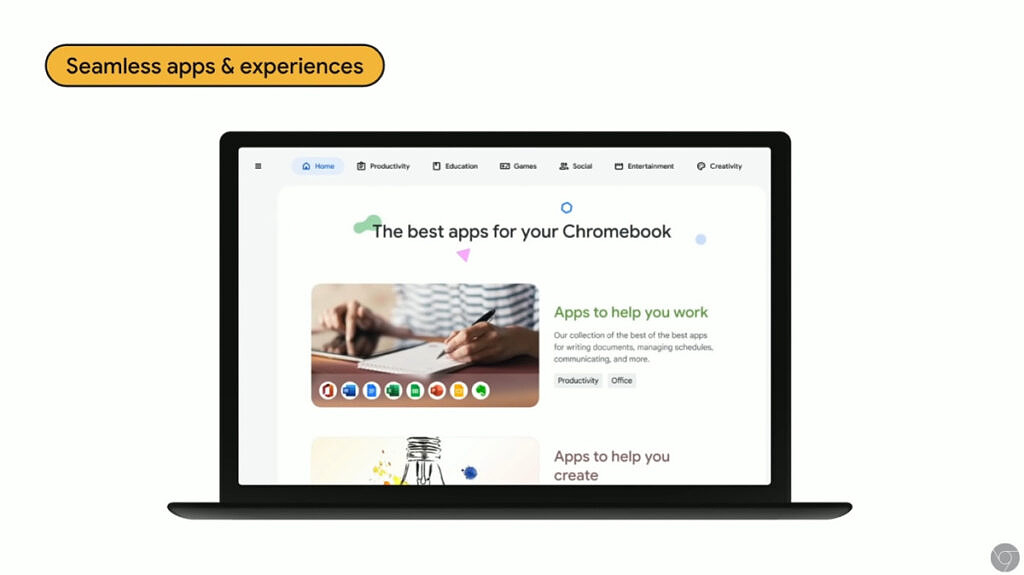 Google Play will be seeing some improvements, too, with a focus on helping Chromebook users find Android apps which work best on their machines. Google isn’t satisfied with the current way that desktop-friendly apps are recommended and so is working on an entirely new discovery surface. With machine learning, the hope is that over time the recommendations will become more tailored, and the new discovery surface will help users with installation, too. Google actually suggests this won’t just apply to the Play Store, either.

There are some other interesting nuggets discussed under the idea of “seamless app experiences” as well. File handling will be getting a nice kick in the pants, with support to open files with preferred web apps joining the existing functionality for Android apps soon. Google also says that “users will be able to back up local files to their preferred cloud storage provider in 2022” without going much further than that. Could this be proper support for non-Google cloud storage providers in the Files app without the need for an Android application?

Game developers are also being encouraged to get their titles ready for Chrome OS, whether they build for the cloud, Android, or Steam. The Steam alpha is limited to only a small number of Chromebooks right now, but if a title is native to Linux or works well with Proton, Google says it’ll work well on a Chromebook. The Arch-based container has a whiff of the Steam Deck about it, and Valve’s handheld is living proof of how successful top-tier games can be on Linux. 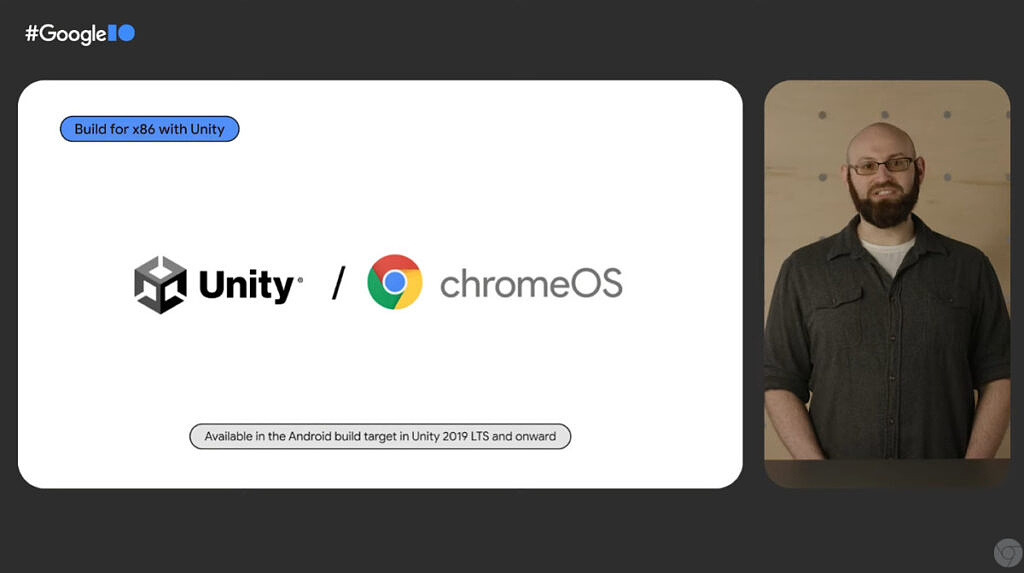 Android game developers are being encouraged to export an x86 build of their titles to ensure the best compatibility with Chromebooks. As an added sweetener, Google and Unity have been working together to make this easier than ever. Starting with Unity 2019 LTS and onward x86 and x86-64 build options for Chrome OS are available under the Android build target.

Chromebooks might have grabbed the headlines more with some flashy new hardware — though we’re told to expect a total of 75 new Chromebooks this year — there’s a lot of cool stuff coming to benefit both users and developers. You can check out the dedicated Chrome OS and Chrome OS gaming sessions from Google I/O to take a deeper dive into what’s new.