The Nest Hub Max is just a bigger version of the Google Home Hub, but that’s no bad thing

How do you improve on the Google Home Hub? Google’s charming little smart screen was a bit of a hit when we reviewed it earlier this year, offering plenty of appeal at a low £139 price.

Google’s answer is three-fold: welcome it into the Nest family with a rebrand, give it a camera and make it bigger. Of course, the latter two of these also add quite a bit to the price, so is there enough here to make it worth paying the extra?

Google Nest Hub Max review: What you need to know

While the Nest branding here is a little confusing, that’s all it is: branding. To all intents and purposes, this is just a bigger version of the Google Home Hub, released earlier this year. But, Google now owning Nest, it makes sense to get all the smart home gubbins – Nest thermostats, smoke alarms, security cameras and doorbells – under the same roof as Google Home, which aims to control it all.

So what you have here is a smart screen. The idea is that you take the digital assistant from the smart speaker and add a screen, letting it communicate in pictures as well as words. You can ask Google Assistant the same things here as you would with a Google Home – the weather, how the traffic is, the latest news – only now it also provides visuals. You can also ask for YouTube videos, which is handy for a kitchen-bound screen if you like to see recipes and so on.

Google’s first smart screen – the Google Home Hub – was a 7in device with a 1,024 x 600 panel. The Next Hub Max gets a larger 10in 1,280 x 800 display, beefier sound by dint of having space for a more substantial speaker, and a camera for video chats and facial recognition. Otherwise, it’s pretty much the same deal, only more expensive.

How much more expensive? Well, while the original Google Home Hub went for £139, the Google Nest Hub Max will sell for £219. A not insignificant jump of 58%.

That kind of price increase is, however, pretty standard. The big rival for the Google Assistant is, of course, Amazon Alexa and, while the Echo Show 5 sells for £79, the 10in Echo Show sells for £219 – in other words, it’s a dead heat between the two.

There are other Google Assistant-imbued smart screens. The Lenovo Smart Display, for example, is available in both 8in and 10in configurations and the larger one currently sells for £180.

The short digest of this section is that the Nest Hub Max looks like the Google Home Hub, only a bit bigger, with the original’s 7in screen gaining an extra 3in. Oh, and a camera at the top.

For those who fear the privacy implications of this, there is a switch round the back that disables the camera, although it also knocks out the microphone. It’s a pity you can’t turn off just the camera while leaving the microphone on this way, although you can do this on the display with a swipe upwards.

Away from the camera, it’s just as attractive as the original. The screen looks like a 2015’s idea of a tablet, with half-inch-thick bezels all the way around but I like its chunky charms. The tablet rests on a fabric-covered speaker with a larger footprint than its predecessor, available in chalk or charcoal colours. Our photos are of the charcoal version.

The benefits of a larger screen should be pretty obvious: everything is bigger and easier to see or touch. And while a 10in screen still isn’t massive in an age of 6in phones and 55in TVs, it’s still more than enough to service the Nest Home Max’s core functions.

The extra size also calls for a resolution boost, going from 1,024 x 600 on the older model to 1,280 x 800 on the new version. That’s a pretty modest boost, and mostly gobbled up by the size increase, meaning that things look pretty similar to how they did on the older model: things aren’t hugely sharp but the colours look rich and largely accurate and that’s pretty much what you need for something that will be viewed from further away than your average phone or tablet.

It is, however, somewhat reflective. You’ll want to take this into account when you decide where to place it but unless you live in a greenhouse, this shouldn’t be a huge issue.

You probably know the drill with smart speakers now. Ask questions, and your virtual assistant will answer, whether it’s to tell you about your day or to turn down your smart light bulbs – but does adding a touchscreen really help? After all, surely the point of a voice assistant is to cut out the need for fingers and screens?

The short answer, for me at least, is that it does. Your mileage will vary depending on what you use it for, of course. If you just treat it like a regular smart speaker to hear about your day and listen to music, it’s a bit of a waste of pixels. Yes, it’s nice to see the map of your route to work or the weather forecast with icons, but it’s hardly transformational. Although, having Google Assistant spell out your spoken words in real-time is actually incredibly helpful since you can see errors before they occur. I say this as someone occasionally left wondering what the hell my Echo thinks I’ve said.

But then there are the wider use cases. If you have a Nest Hello doorbell, you can see who’s at your door without having to consult your phone. If you keep it in the kitchen, you can look up recipes and cooking tutorials on YouTube, without having to touch anything. It even has Chromecast support built-in, meaning you can push videos to the screen – including, to my delight, those found on my personal Plex server.

Being able to see and control all your smart home devices on a single screen is also nice, and you can even link it to Google Photos to be a digital photo frame when it’s sleeping. In my case, that’s mainly tech product shots, but hey, it’s the thought that counts and this is a lovely one.

So I like the screen, but the camera is perhaps a more controversial choice and personally I’d probably rather it wasn’t there, all things considered. But at least Google has made it clear when it’s active, with a bright green light, and disabled with a red light. Most of the time, there’s no light at all.

The camera introduces two useful new features. The first is facial recognition, where the Nest Hub Max can recognise you as you approach in order to show information that’s pertinent only to you: notifications, calendar info and so on. This seems to work pretty well so far, but we’re going to give it more testing with more faces to be sure.

The second addition – Quick Gestures – lets you control the device with hand gestures, rather than just your voice. That sounds like a gimmick, but the one available at launch is actually really good: put up your hand in a stop sign position, and the device will pause music, letting you put in voice commands without having to shout to get its attention. It works really well, never confusing waving at the camera with a stop sign, and only working when you’re looking directly at the device.

The camera also means you can make video calls with Google Duo, which is nice enough, but the more useful feature, arguably, is that the Nest Hub Max doubles as a security camera. The system comes with a free month’s trial of Nest Aware, which means it can capture video when you’re away. Note that enabling security camera functionality does mean you have to link your Nest and Google accounts, which kicks off any “Works With Nest” connections you may have, so buyer beware.

Once your trial expires, you’re looking at a subscription cost of at least £5 per month if you want to keep it going, although on the free tier it’ll still send notifications and take a photo – albeit one that isn’t kept for very long. The extra ongoing cost feels a little cheeky but given security camera status is very much an optional bonus feature of the Nest Hub Max, you can’t complain too much. Take it or leave it, as they say.

What isn’t a bonus feature is the speaker itself, so how is the sound quality? Well, the larger footprint means that the Nest Hub Max gets a slight upgrade on the original Google Home Hub. The new model comes with a 75mm, 30W woofer and two 38mm, 10W mid-high drivers, and the sound quality is pretty reasonable – although no match for an Apple HomePod.

It does distort quite unpleasantly at higher volumes, mind. That said, the sound is pretty loud from the speaker in the first place, and anything above seven out of ten is probably louder than is practical for a speaker such as this. In fact, my main concern while letting the Nest Hub Max be my radio while I write this review is that there should be a setting between 1/10 and muted.

One final word on the microphone. If you’re listening at a reasonable volume, it’s pretty damned impressive and I’ve tried practically whispering the wake phrase “Hey Google” only to have my music instantly muted while Google Assistant awaits instructions. It’s more impressive than any Echo I’ve used in that respect.

The Google Nest Hub Max takes everything that was great about the Home Hub and makes it a little bigger. That means it’s still a great product but only you can really say whether you need to spend the extra £80 on an extra three inches of screen real estate, slightly beefier sound and a camera. 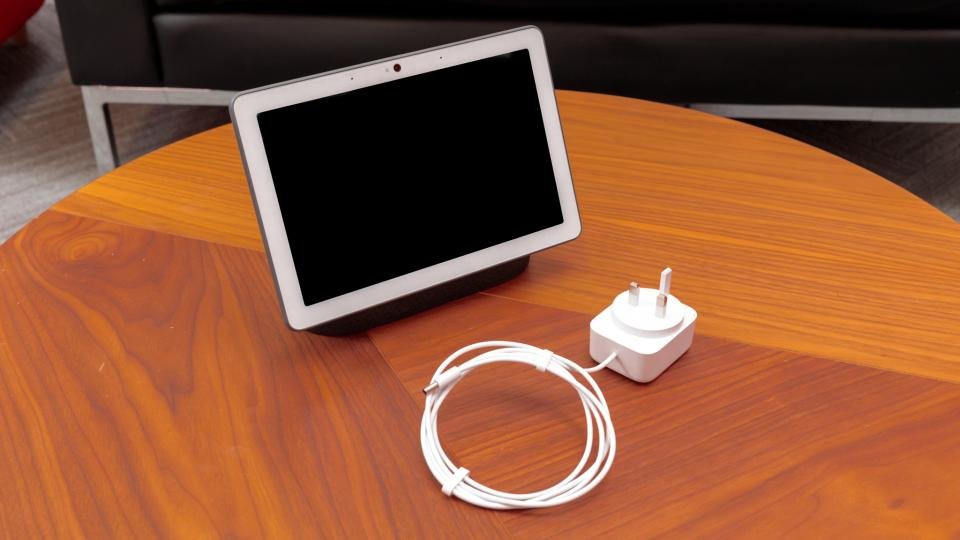 Both, however, are excellent products and, while a lot will depend on your personal home ecosystem, my preference is for Google Assistant over Alexa. It’s just that bit smarter, both at understanding what it’s being asked and providing the right answer. For me, then, that makes the Nest Hub Max the best smart screen you can buy right now.