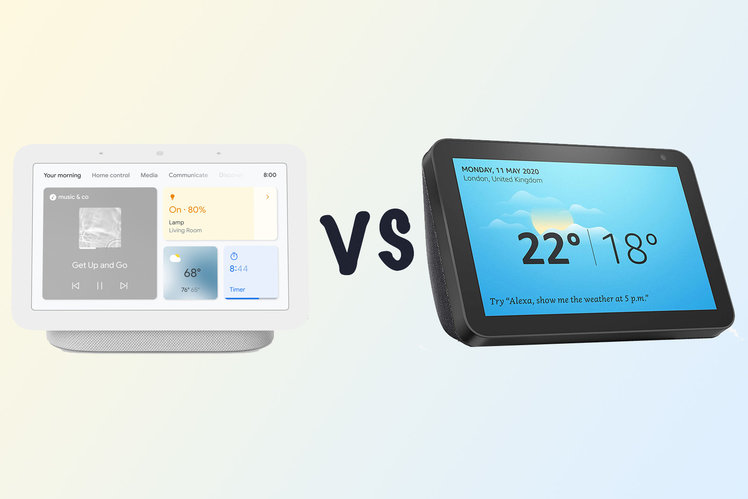 Google’s second generation Nest Hub features a similar design to its predecessor, along with a few improvements and extra features. Its size puts it in direct competition with Amazon’s Echo Show 8, but which should you buy?

We’ve compared the Google Nest Hub to the Amazon Echo Show 8 to help you work out how they differ in terms of design and features, and which might be the right one for you and your home.

The Google Nest Hub has a very similar design to its predecessor, offering a 7-inch floating display on top of a fabric-covered speaker base. The display is edgeless, ditching the lip found on the original Nest Hub, but it still offers a white bezel surrounding the LCD screen on all colour options.

At the top of the display is the Ambient EQ Light Sensor and far-field microphones, while a volume toggle is positioned on the rear of the display, as well as a microphone mute physical toggle switch and power port. The Nest Hub comes in Chalk, Charcoal, Sand and Mist colour options.

The Amazon Echo Show 8 meanwhile, has an 8-inch display with a triangular-shaped, fabric-covered speaker on the rear. The display has a slight lip at the edge, but it’s a neat and compact design overall. Colour options are black and white, with the bezel surrounding the display respective to each colour.

There’s a front-facing camera in the top right of the display within the bezel, while the top of the device has a camera cover toggle, microphone on/off button, volume up and down buttons and microphones. There’s also a power port and 3.5mm audio output on the rear.

The Google Nest Hub has a full-range speaker on board, which is said to offer 50 per cent more bass than the original Nest Hub. There are three far-field microphones – like the Nest Audio and Nest Mini – and there’s an Ambient EQ Light Sensor.

The Amazon Echo Show 8 has 2-inch speakers with a passive bass radiator. It has four microphones on board, and it also has a 1-megapixel front camera with built-in cover as we mentioned.

The Echo Show 8 runs on the MediaTek MT8163 processor and there is a 3.5mm audio output.

Both the Nest Hub and the Echo Show 8 feature Wi-Fi and Bluetooth.

The Google Nest Hub runs Google Assistant so it offers all the features that brings with it, including setting timers, playing music, using the translator mode, checking the weather, finding out the news etc. You can also watch Netflix, Disney+ or YouTube on the Nest Hub, use it as a digital photo frame, control smart home devices and audio call through Google Duo.

Thanks to the Soli radar chip on board, the Nest Hub offers support for Quick Gestures – allowing you to raise a hand to pause music for example – and it also offers sleep tracking when placed on a bedside table for the person closest to the display. Sleep information will appear on the device in the morning, as well as through Google Fit.

The Amazon Echo Show 8 runs Amazon Alexa, and all the features that come with Alexa, which like Google Assistant include timers, music, weather, jokes, news and games. You can also watch Prime Video or Netflix on the Echo Show 8, use it as a digital photo frame and control smart home devices.

The camera on board the Echo Show 8 enables you to video call friends and family, but the Echo Show 8 also offers Alexa calling, allowing users to call any friends or family with an Echo device or the Alexa app.

Both the Google Nest Hub and Amazon Echo Show 8 support multi-room audio, though only the Nest Hub offers Chromecast built-in.

The Google Nest Hub is available to pre-order now and costs £89.99. As mentioned, it comes in four colour options: Chalk, Charcoal, Sand and Mist.

The Google Nest Hub and Amazon Echo Show 8 are similar in terms of what they offer, with a couple of differences, but the main difference is the Nest Hub runs on Google Assistant and the Echo Show 8 runs on Alexa.

If you already have Google Assistant-enabled speakers, then you’ll likely want to stick with it and therefore the Nest Hub will be the one for you, while those with Alexa will likely want the Echo Show 8.

If you’re new to the smart display arena, then the Nest Hub offers some interesting features over the Echo Show 8 in terms of sleep tracking, gesture control, the ability to watch Disney+ and the Thread protocol for easier smarthome control. The Echo Show 8 has a larger display though, as well as Alexa calling and video calling thanks to the built-in camera.