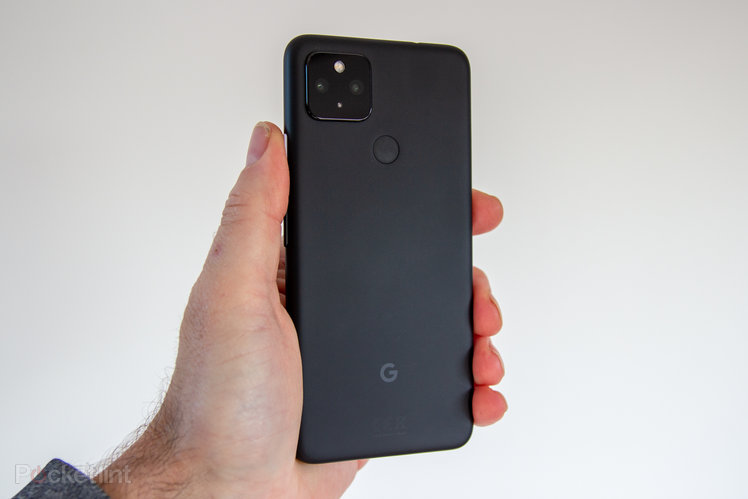 You might ask why the Pixel 4a 5G basically has the same feature set as the Pixel 5, rather than just being a larger version of the Pixel 4a that was announced earlier in 2020.

That would be a well-placed question too, because Google’s 2020 line-up of Pixel devices isn’t as straightforward as it has been in the past.

The Pixel 4a 5G is the largest device of the lot, with the same core power and same camera as the Pixel 5, but at an even lower price point. So how does that work?

While there’s much about the Pixel 4a 5G that bears a resemblance to the Pixel 4a, with its polycarbonate back and black colouring – that’s the only option we’ll be getting in the UK – both these phones share a design with the Pixel 5 too. 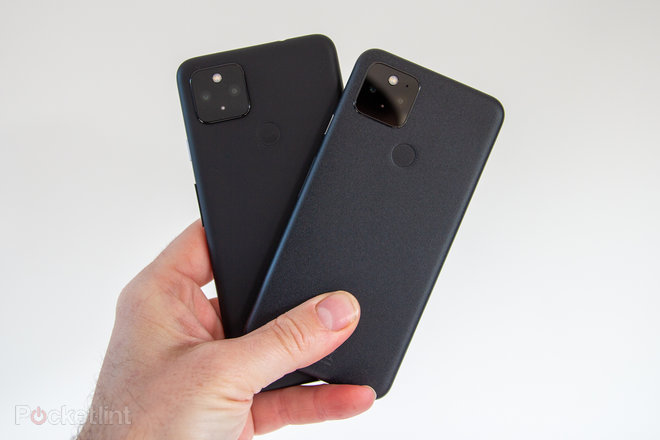 The advantage that the Pixel 5 holds is that it uses an aluminium enclosure, so it’s a more premium material, but it’s coated and painted, so doesn’t feel too different to the Pixel 4a models. There’s the soft warmth of plastic here, but with a matte finish, so it stays free from fingerprints. It’s not quite as grippy as the texture of the Pixel 5, not quite as fancy as the ‘Glasstic’ of the Samsung Galaxy S20 FE, but it doesn’t feel cheap.

There’s no flex to it and a decent heft to the phone, which brings it closer to the premium end of the mid-range in which this phone really sits. There’s no IP rating on this phone – so it’s not as well weather-protected as the Pixel 5 – but that’s not uncommon in phones in this price bracket – the Sony Xperia being about the only exception.

There’s a rear mounted fingerprint scanner that’s fast, reliable, and on reflection, a lot easier to use than under-display scanners that have adorned many recent devices. So while it doesn’t make for such a seamless look to the back of the phone, we can’t help feeling a sense of relief with the ease of use it brings. 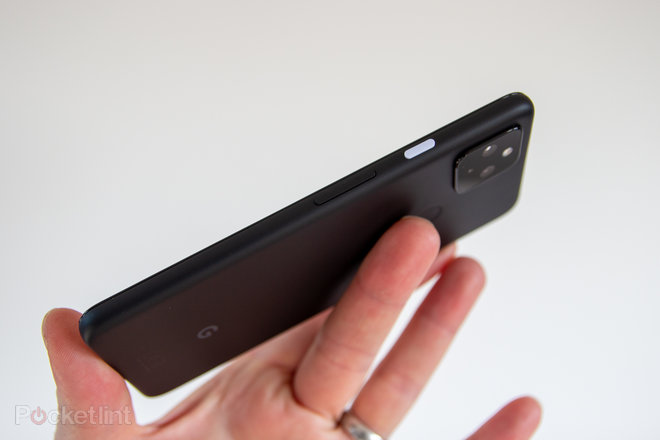 There’s another major difference that the Pixel 4a 5G exhibits over the Pixel 5 in the audio department. The Pixel 4a 5G, as a cheaper device, has been adorned with a 3.5mm headphone socket. That’s useful for those with legacy devices – or wanting the convenience – but it’s not the most important thing.

While the Pixel 5 hides the ear speaker at the top of the display, the Pixel 4a 5G has a grille in the bezel, like the smaller Pixel 4a, which lets the sound out. That, combined with the main loud speaker on the bottom of the phone, makes for a much better audio experience than the more expensive Pixel 5. 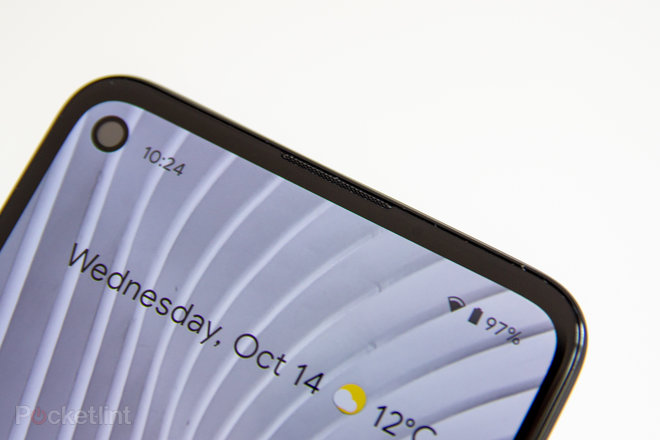 Calls sound better, the stereo effect is better, and the experience when watching video or playing games is better. It’s a better solution overall, and that plays to this phone’s positioning with a larger display for those more interested in watching video or gaming.

The big sell of the Pixel 4a 5G is that it has a bigger display – it’s the largest of the 2020 Pixel devices, at 6.24-inches. Google has stuck to a Full HD display and that’s been pretty common on devices in 2020, especially around this price level.

It’s a good display too, using an OLED panel, so it has the colour and vibrancy that you’d expect, meaning nice deep blacks. It supports high dynamic range (HDR), so that will swing in on compatible services like Netflix to give you even better visuals. 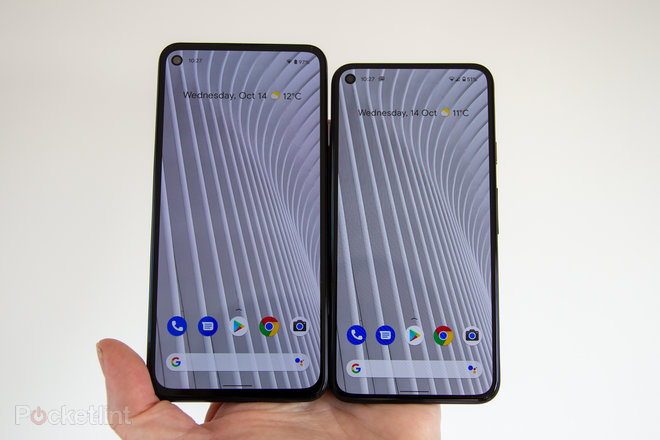 The thing that separates this display from that on the Pixel 5 is that it only has a 60Hz refresh rate. That means that the Pixel 5 can look smoother when scrolling around some content, thanks to its 90Hz panel, but you’ll only really notice if you have the two devices side-by-side.

There’s a punch-hole in the display for the camera – which isn’t the smallest example of punch holes, but it isn’t obtrusive either. 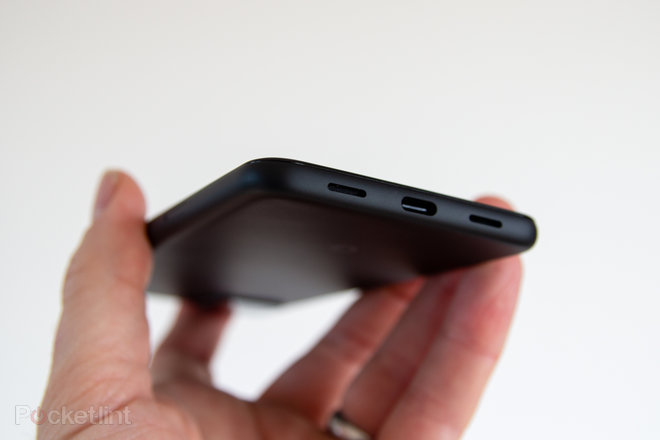 The Snapdragon 765 has been all the rage in 2020, powering many of the most exciting devices of the year and behind the growth of a more capable and affordable middle range of devices. The performance we’ve experienced from the Pixel 4a 5G in our testing is exactly as we’d expect – it’s very fast, smooth, and powerful. This hardware has no trouble playing the latest games and the experience is better than it is on the Pixel 5 – thanks to the larger display and the better sound quality – while the bodywork also doesn’t get as hot.

Side-by-side, we’d pick the Pixel 4a 5G over the Pixel 5 any day of the week when it comes to playing games and watching movies for this very reason – which is great for a phone that’s more affordable. The boosted hardware also means that it’s a better experience than the smaller Pixel 4a too; more on par with devices like the OnePlus Nord. 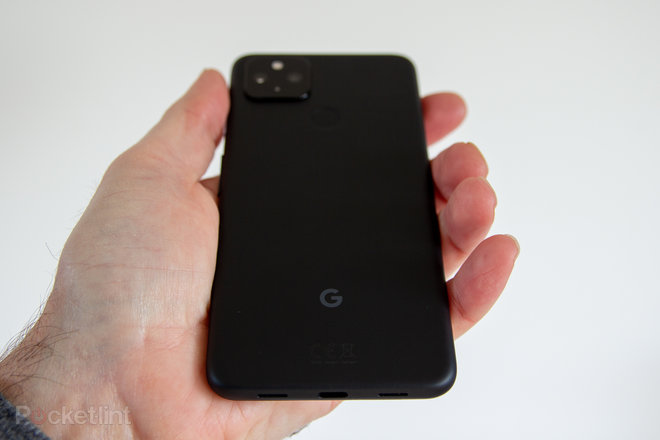 The battery has a 3,800mAh capacity – which sounds a little on the small side for a device of this size – and there are some competitor devices, such as the Moto G 5G Plus, that have a much more capacious battery. But, regardless, Google’s power management is a lot more effective on its 2020 devices and we have no concerns about the endurnace of this phone.

Having got through the day with over 6 hours of screen time, including over and hour and a half of Call of Duty Mobile (with the screen a full brightness), it made it to the evening without a problem, so there are no concerns here.

There’s no wireless charging here – as found in the Pixel 5 – but you do get 18W charging, with that fast charger included in the box.

Cameras are a cut above

The cameras on the Pixel 4a 5G are, surprisingly, exactly the same as the Pixel 5, leaving the smaller Pixel 4a as the odd model out. It’s also another minor point of confusion around the naming of these devices. The good news is that you’re getting the same experience in the Pixel 4a 5G as you do in the Pixel 5 – and that’s a great performing camera.

We took most of the same test shots on the Pixel 4a 5G that we used for our Pixel 5 review – and there’s no difference between them, because it’s the same core camera system. There might be a minor difference in the ISO or shutter speed because of metering a couple of seconds later, but for all intents and purposes, the results are the same. The only difference is that the Pixel 5 offers audio zoom on video which the Pixel 4a 5G doesn’t.

The main camera in the Pixel 4a 5G is the star. It’s a little old now, but Google continues to get good results from it, because so much of smartphone photography is computational rather than optical. That’s evident through some of the features that come to these new phones, like, for example, the ability to apply background blur to existing images, regardless of whether they were taken on this phone or not.

The main camera performs consistently well in all conditions: it’s happy in bright sunshine, in HDR scenarios, and still excels in the dark. Portrait mode is still effective and all these skills work well across the front and back cameras.

The new addition to the party is the ultra-wide camera. This is a popular option because it’s so easy to take impactful photos, opening up creative opportuntities. It’s not the widest of wide-angles you’ll find on phones – at 107 degrees – but it avoids some of the worst downsides too, in that images are mostly sharp across the frame without the blurring that can plague much wider lenses.

There’s no optical zoom, it’s all digital, and like the Pixel 5 it also appears to have the same camera bug, where it will sometimes process a 2x digital zoom picture back to being a 1x zoom photo (you can read more about that in our Pixel 5 review). The digital zoom runs out to 7x, but it can’t compete with those flagship phones that offer periscope zoom lenses out at this range.

Overall, the Pixel 4a 5G is one of the most consistent and dependable cameras in this price bracket and indeed challenges some phones that cost twice the price. What’s most important is that Google has avoided gimmicks – many cheaper models opt for a higher resolution and a collection of cheap junk cameras to claim they have a quad camera. In reality, simpler is better – remembering that Google is piling in its computational photography experience into these devices, coming out with great results.

One of the advantages in opting for a Pixel device, of course, is that you get to be front of the line whenever there’s anything new coming to Android. That means the Pixel 4a 5G comes with Android 11 out of the box – and while there aren’t huge changes on the surface compared to Android 10, there are a couple of goodies, such as the native screen recording. 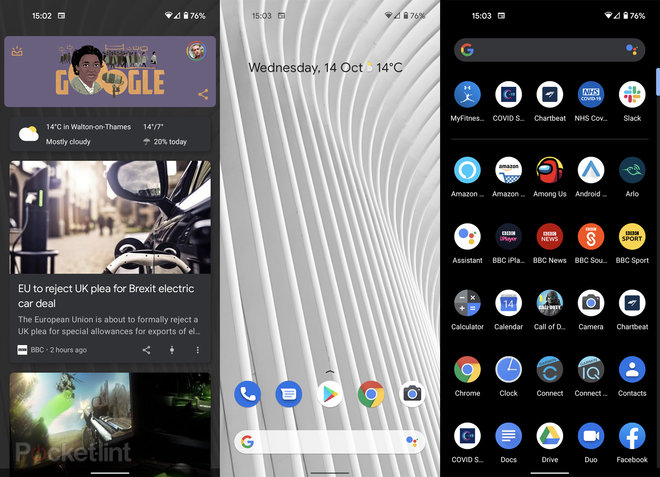 It also means that you escape the bloat or pre-installs that you get from many other manufacturers. While there are cheaper devices that offer this level of hardware and comparable specs, there aren’t many, except perhaps Nokia and Motorola, that give you a bloat-free software experience.

Again, it’s essentially the same experience as the Pixel 5 and it is slick and fast in operation, adding in new functions in places like the Photos app that allow a wide range of editing options, including things like portrait lighting and the background blurring of any photo as we previously mentioned.