The latest Pixel was officially launched less than a month ago, and it is already starting to show what could be a huge problem. Some early Google Pixel 5 buyers are starting to notice a gap between the phone’s frame and the display, which could jeopardize the phones IP rating, and more.

The new Google Pixel 5 is already starting to arrive at its new owners’ homes. Unfortunately, some of them report that their new devices are coming with a small separation between the screen’s plastic bumper and the aluminum frame. Reports seem to vary, but the separation is usually found in the area around the front-facing camera. Customers are expressing concern, as this gap could affect the Google Pixel 5’s water and dust resistance.

The guys over at Android Police have also experienced this issue with their device, so it adds up to a number of reports that aren’t necessarily large, but it’s increasing at a consistent rate. These reports can be found at the Pixel Phone product forum and on XDA’s forum with several examples of these gaps and how much it can vary in location and separation in these phones. 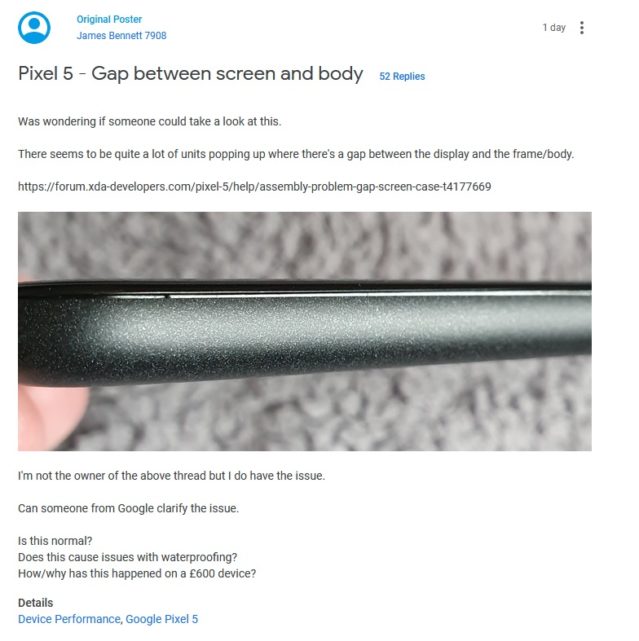 “We can confirm that our own Pixel 5 review unit is also affected, though to a lesser degree than some of those pictured above. Most reports show it in the corner closest to the display’s camera cutout, along the top of the phone, and above the SIM tray on the left side, but it may also appear in other areas as well. Though most images demonstrate the problem in the Just Black colorway (probably because it’s most visible with the stronger contrast), it also affects the Sage Green color.”

Only time will tell if these gaps affect the phone’s water resistance. Still, reports mention that the aesthetic defects have been present since Google Pixel 5 was taken out of the box, and the screens don’t seem to be separating over time. Hopefully, this issue is nothing more than a cosmetic defect that won’t harm the phone’s performance or durability.