Google has been fitting its Pixel phones with a custom security chip called Titan M for a while now. This chip stores sensitive data and handles processes such as protecting passcodes, encryption/decryption, and ensuring secure transactions in wallet apps. Plus, Google also integrates it with the Verified Boot process for validating the Android build, ensuring that you’re running a secure software that hasn’t been tampered with. In general, Google classifies such hardware as a Secure Element. Now, Google wants to extend that convenience to more Android phones – and even smartwatches – by establishing the Android Ready SE Alliance.

As part of the initiative, Google is partnering with vendors that make SE hardware to create a set of open-source, validated, and ready-to-use SE Applets that can be used by OEMs. Additionally, Google has also released the General Availability (GA) version of StrongBox for SE. In case you’re wondering, a StrongBox is part of a dedicated security chip – like the Titan M – that allows a phone to securely store keys for Android applications. 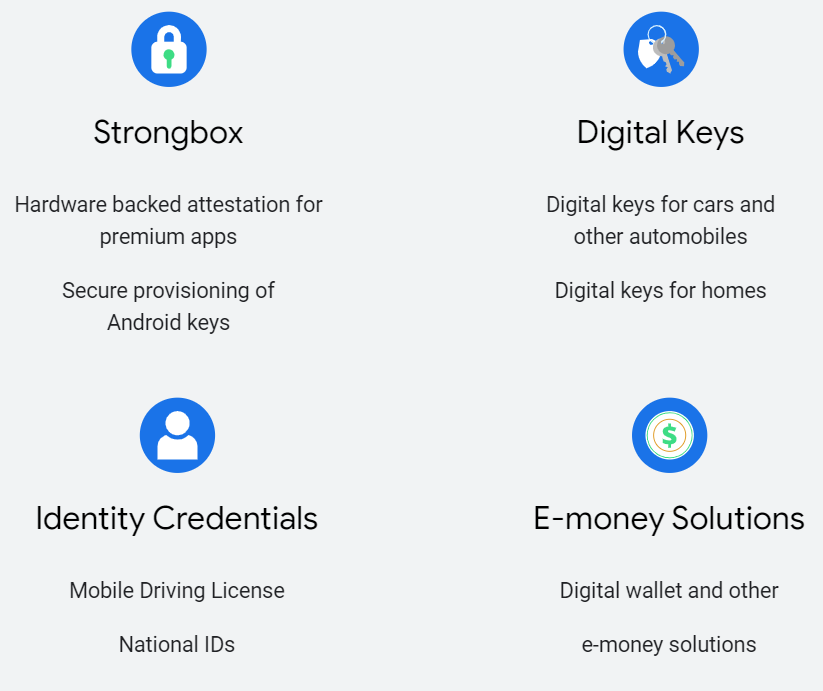 “The Android Ready SE Alliance is a collaboration between Google and Secure Element (SE) vendors. The alliance was created to make discrete tamper resistant hardware backed security the lowest common denominator for the Android ecosystem. Under this alliance, Google and the SE Vendors offer a growing list of tested open-source implementations of hardware backed security applets for new and emerging use cases.”

Right now, Google’s focus is on allowing Android devices with dedicated security hardware to be able to safely store data such as ID, driver’s license, and digital car keys. However, it can also be used for protecting digital wallets and other important documents such as passports as well.

Interestingly, Google is not limiting the scope of its Android Ready SE Alliance and StrongBox to just phones and tablets, but also envisions the benefits for smartwatches, Android Auto hardware, and Android TV ecosystem as well. The ready-to-use SE Applets are currently available from Giesecke+Devrient, Kigen, NXP, STMicroelectronics, and Thales. You can find the full list of supported chipsets from the aforementioned brands here.

“OEMs that adopt Android Ready SE can produce devices that are highly secure and allow for remote updates to enable compelling new cases as they are introduced into the Android platform. Consumers will benefit from their devices being more secure and updatable with new capabilities,” says Google. The company adds that multiple OEMs are already adopting the Android Ready SE applets, and aims to add more names to the list.

The post Google wants Android smartwatches and phones to act as digital IDs and keys appeared first on Pocketnow.