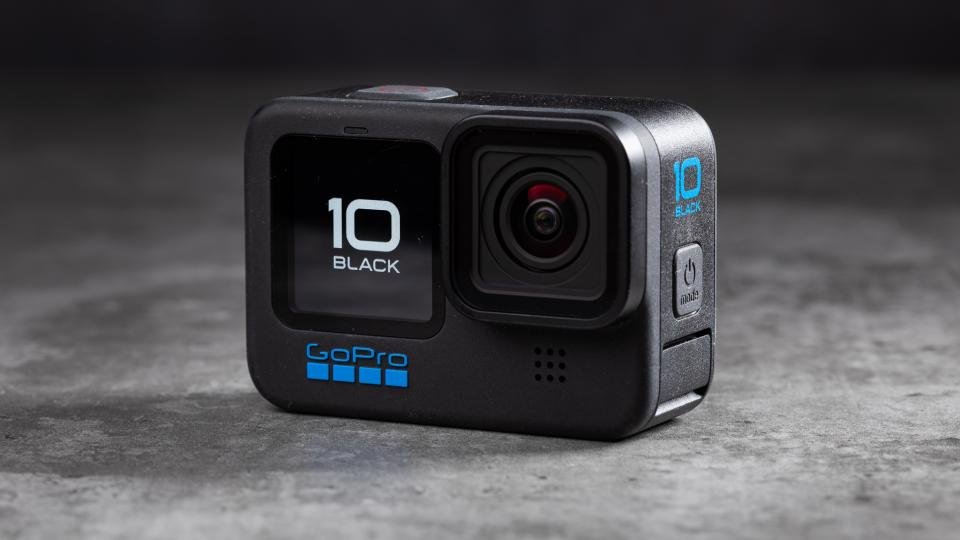 The Hero 10 Black is GoPro’s most capable action camera yet, with an all-new processor, 5.3K60 video and HyperSmooth 4.0 stabilisation. While the Hero 10 Black is usually available bundled with a 12-month GoPro subscription for £380, right now you can pick one up for just £330.GoProNow £330Buy Now

Another year, another flagship launch from the renowned action camera firm. Following GoPro’s radical refresh with the Hero 9 Black, the first Hero to feature both front- and rear-facing colour displays, the Hero 10’s updates appear far more subtle, at least at first glance. Beneath its rugged, waterproof exterior, however, the Hero 10 Black houses an all-new heart.

The Hero 10 Black is the first to be powered by GoPro’s GP2 processor. The GP2 delivers twice the performance of its predecessor, enabling the Hero 10 Black to double the frame rates of the Hero 9, offer more effective video stabilisation and a more responsive user interface.

GoPro Hero 10 Black review: What you need to know 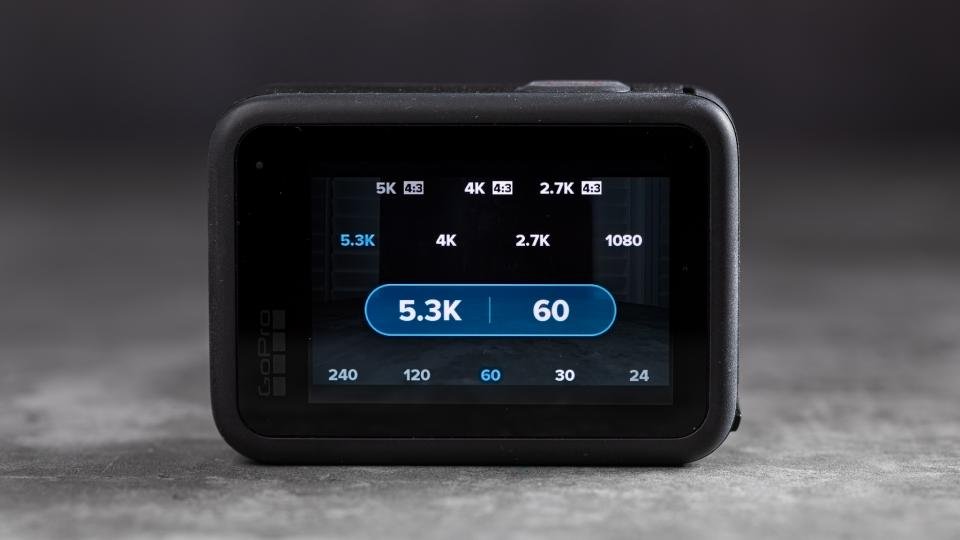 The Hero 10 Black packs GoPro’s latest stabilisation tech, HyperSmooth 4.0. HyperSmooth 4.0 is GoPro’s most effective video stabilisation to date, with standard and boost modes available across all resolutions and frame rates. Horizon Leveling, a feature that allows the camera to keep your footage level as well as stabilised, has also been upgraded, now with up to 45 degrees of tilt correction, up from 27 degrees on the Hero 9. 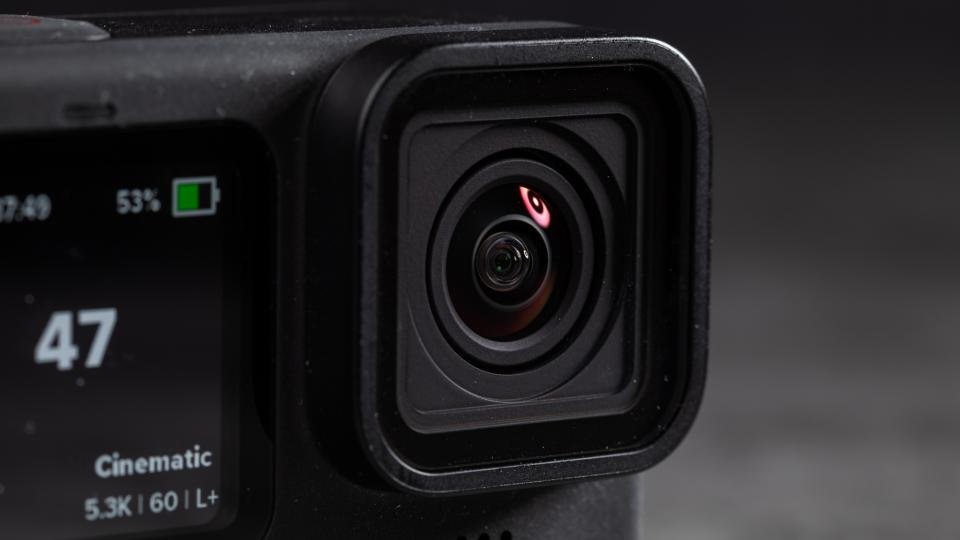 It also promises a snappier user experience, with faster boot-up times, a higher refresh rate for the front-facing display and a more responsive rear display. Additionally, the Hero 10 Black supports faster transfer speeds over both Wi-Fi and USB.

The GoPro Hero 10 lists for £480 at retailers including Amazon and Argos but is available with a hefty discount for GoPro subscribers direct from GoPro. GoPro’s subscription gives access to unlimited cloud storage for your footage, total camera replacement should your camera pick up damage and 50% off accessories in the GoPro store. When purchased direct, bundled with a free 12-month subscription, you can pick up the Hero 10 Black for £380 – an instant £100 saving.

As far as the alternatives go, the previous generation Hero 9 Black is an obvious rival. Recording options are slightly more limited, topping out at 5.3K30 and 4K60, but it shares many of the same design attributes, with front and rear displays, native waterproofing and built-in mounting prongs. The Hero 9 Black ordinarily retails for £430 but can be picked up for £330 when bundled with a 12-month GoPro subscription.

If you can live without the front-facing display, GoPro’s older Hero 8 Black is still a solid budget pick. Right now it’s available bundled with a 12-month GoPro subscription for £260.

Outside GoPro’s stable, Insta360’s current lineup is also well worth looking into. The Insta360 One R is an incredibly versatile camera, featuring a modular design with interchangeable 4K, 5.3K and full 360-degree lens modules, and retails for around £400.

Externally, the Hero 10 carries over many of the Hero 9’s refinements. It has the same dual-display design, control layout, built-in mounting prongs and 10-metre water resistance. In fact, it matches the Hero 9’s footprint exactly, measuring an identical 51 x 71 x 34mm. It is, however, five grams lighter at 153g. This like-for-like design means that the Hero 10 maintains backwards compatibility with all the Hero 9’s cases, mounts and GoPro Mods.

Across the front of the camera sit the lens, a microphone and the 25 x 25mm front-facing LCD display. The lens has been upgraded with improved scratch resistance and new coatings have been applied to help repel water and reduce ghosting. The lens housing itself is also removable and compatible with GoPro’s ultra wide-angle Max Lens Mod.

The rear of the camera is almost entirely dedicated to the large, 50 x 33mm, touch-sensitive display, and there are also physical buttons for the shutter on the top edge and power on the left side. Beneath the power button, a recessed inlet, designed for rapid water drainage while diving, houses a second microphone. On the opposite side is a water-tight hatch, behind which sits the battery, micro-SD card slot and USB-C port. The camera takes the same batteries as the Hero 9 and can be powered directly over USB. 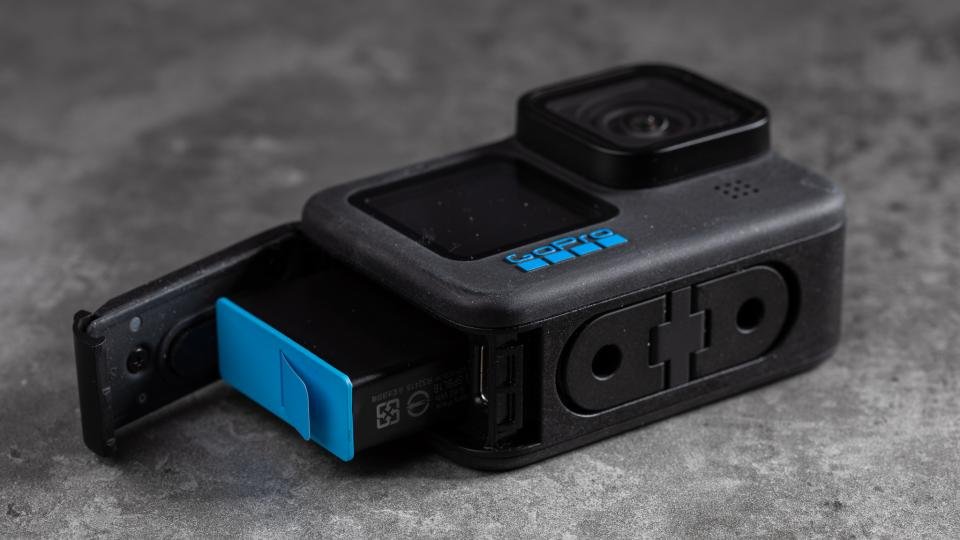 Onboard, the camera offers dedicated modes for photos, videos and time lapses, with customisable interfaces for each. There are also built-in presets for creating night lapses, slow motion shots and for GoPro’s TimeWarp hyperlapse feature.

As with all modern GoPros, you’re able to vary the camera’s field of view using “digital lenses” that adjust the camera’s crop and distortion corrections. Options range from 16mm at the wide end to 27mm at the narrow end, although the widest SuperView setting is only available at resolutions of 4K and below. It’s also worth noting that engaging HyperSmooth stabilisation will result in an additional crop. 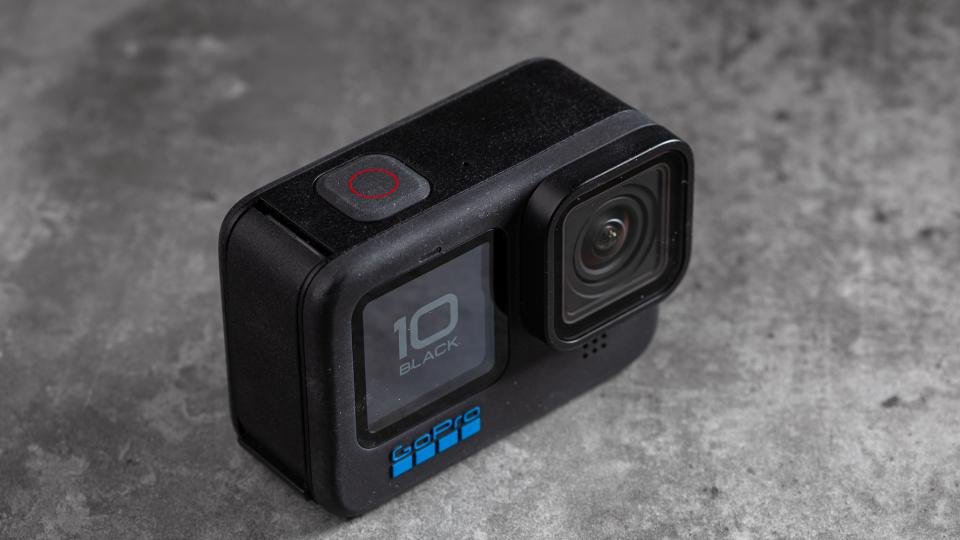 The Hero 10 Black can be paired with GoPro’s Quik smartphone app for wireless camera control or editing on the go, and it also supports a direct connection over USB for speedier file transfers.

The Hero 10’s user interface should be familiar to anyone who has picked up a GoPro in the last few years. It’s nicely laid out, easy to navigate and accessible for GoPro newbies and veterans alike. Simply swipe left and right to switch between photo, video and time lapses modes, up for playback and down for settings.

Each mode comes preloaded with a selection of tweakable presets or you can opt to create your own presets from scratch. You can even customise the onscreen shortcuts on a preset-by-preset basis, allowing you to keep your most used features within easy reach. 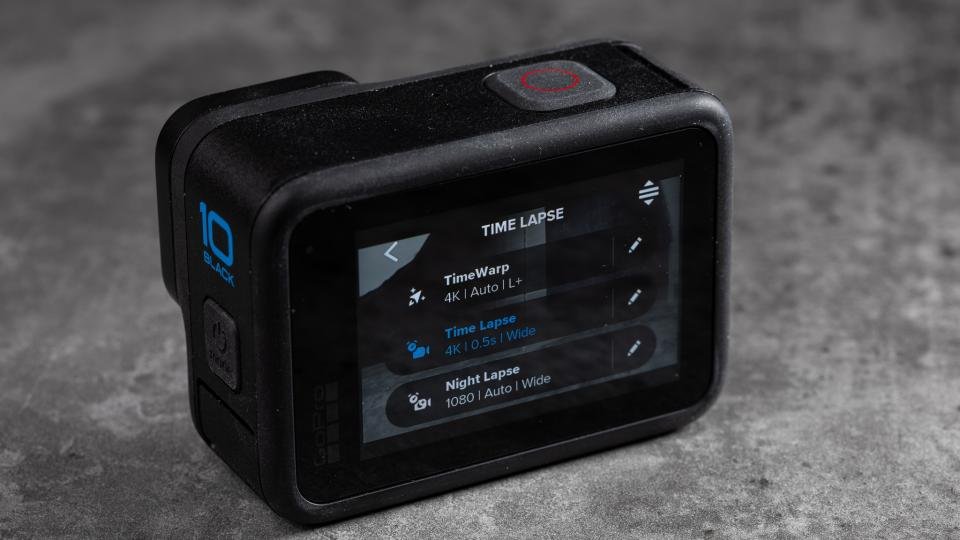 One of my main gripes with the Hero 9 was that the touchscreen often felt a little sluggish with some swipes and gestures needing to be repeated before the camera would respond. Whether thanks to that new GP2 processor, smart software tweaking or a combination of the two, the Hero 10 feels much more responsive and is far more pleasant to use as a result.

In video mode, the Hero 10 performs wonderfully. Exposures are well balanced, colours are accurate and there’s plenty of dynamic range. Straight out of the box, videos have that classic, saturated GoPro look, but there’s plenty of scope for tweaking within the settings – or you can shoot to a flat profile and grade in post.

Recordings made using the Hero 10’s maximum 5.3K settings are very highly detailed. And, even though you’re unlikely to publish anything at 5.3K, it should greatly expand your options for cropping or downsampling during editing. You will, however, want to consider enabling the high-performance 100Mbits/sec recording mode for busier scenes as the standard 60Mbits/sec mode can get a little blocky at higher resolutions.

Effective video stabilisation is crucial for any action camera and with HyperSmooth 4.0 GoPro has reaffirmed its position at the top of the stabilisation heap. The Hero 10’s footage is smooth, jerk-free and, overall, movements feel natural and fluid. While it isn’t quite gimbal-smooth, it’s not far off – and the best I’ve seen from an action camera.

Horizon Leveling is also incredibly useful. While filming in the linear view mode, Horizon Leveling is able to correct up to 45 degrees of tilt (in any resolution and frame rate), and so shots filmed off-axis from handlebars, helmets or tripods should play back perfectly level. While it’s a big step up over the Hero 9’s 27 degrees of correction, it does still fall quite far behind the full 360 degrees offered by DJI’s Action 2. To get that sort of performance out of the Hero 10 you’ll need to pair it with GoPro’s accessory Max Lens Mod.

In keeping with the last few GoPro generations, the onboard microphones are excellent. Voices cut through nice and clear and you have the option of recording dual audio tracks, one with a user-defined level of additional processing and one RAW. 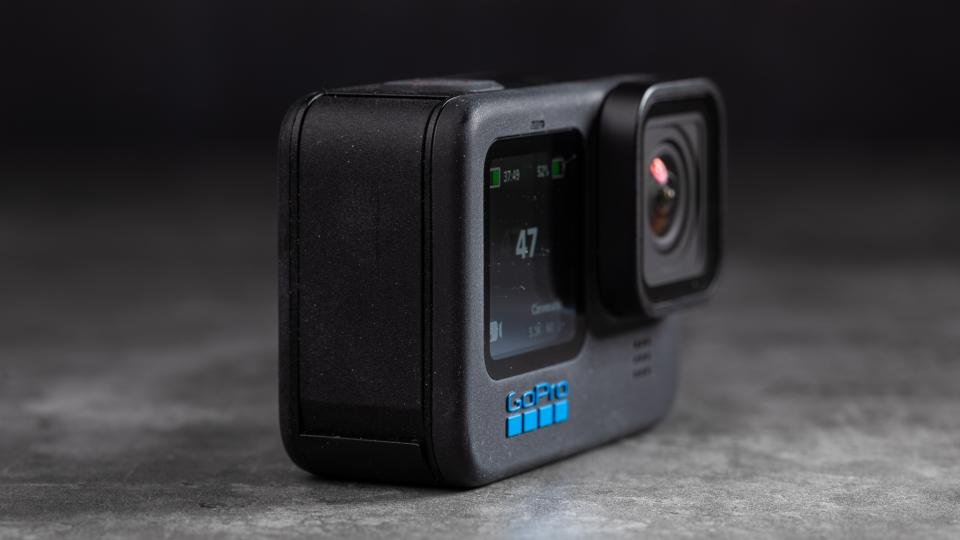 Where the Hero 10 starts to come a little unstuck is battery life. GoPro may have fitted out the camera with a more powerful processor but the battery hasn’t been upgraded to match. Recording at 4K60 I was able to manage just over an hour of recording on a single charge, while at 5.3K60 I was only able to squeeze out 45 minutes. GoPro at least seems aware of this limitation, having recently released the high-performance Enduro battery, which the firm claims should boost the Hero 10’s battery performance by up to 40%. It’s a quick and easy upgrade, it’s just a shame it doesn’t ship with the Hero 10 as standard. 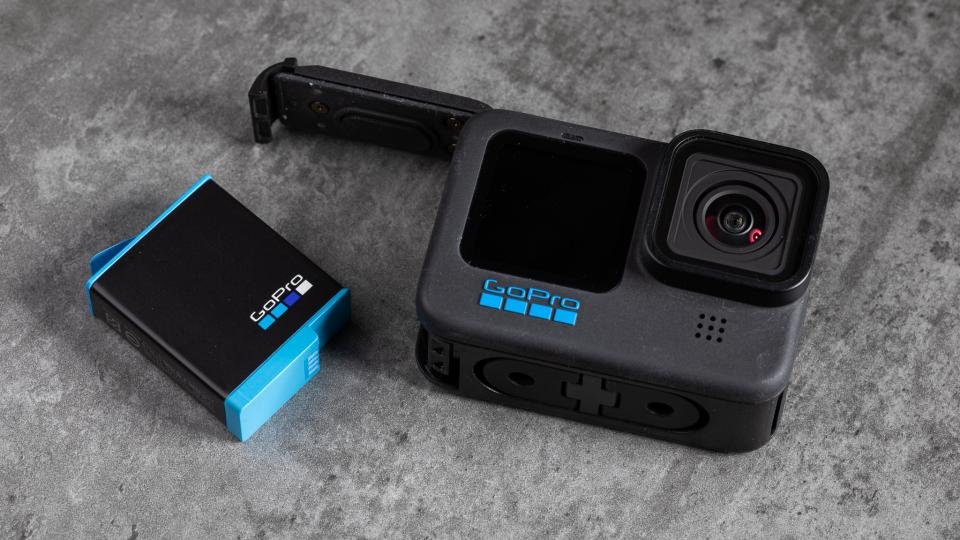 Like most of the ultra-high-resolution, high-frame-rate action cameras I’ve tested, the Hero 10 can also suffer from overheating issues. Sat stationary on my desk I managed around 22 minutes of continuous recording at 5.3K60 before the camera shut down due to overheating. At 4K60 it performed slightly better, managing 30 minutes. Overheating is far less of an issue while recording outside with decent airflow or while recording shorter clips but, depending on how you intend to use the camera, it’s certainly something to be aware of.

Combining the versatile dual-display design of the Hero 9 with a supercharged set of specs, the Hero 10 Black is GoPro’s most powerful Hero camera to date. The unbeatable frame rate and resolution options should satiate even the most demanding users, while the stabilisation and overall usability updates will be appreciated by both casual and professional users alike.

It’s not entirely without its flaws: pushing it to its limits for extended periods can cause overheating and its battery performance leaves a lot to be desired, but these limitations are likely manageable for most people. Seasoned GoPro users will know that having spare batteries on hand is a given.

If you can live without the bleeding-edge bells and whistles then the Hero 8 may offer better value, and if you already own a Hero 9 you may struggle to justify the upgrade. For everyone else, the GoPro Hero 10 Black is the best action camera on the market right now.