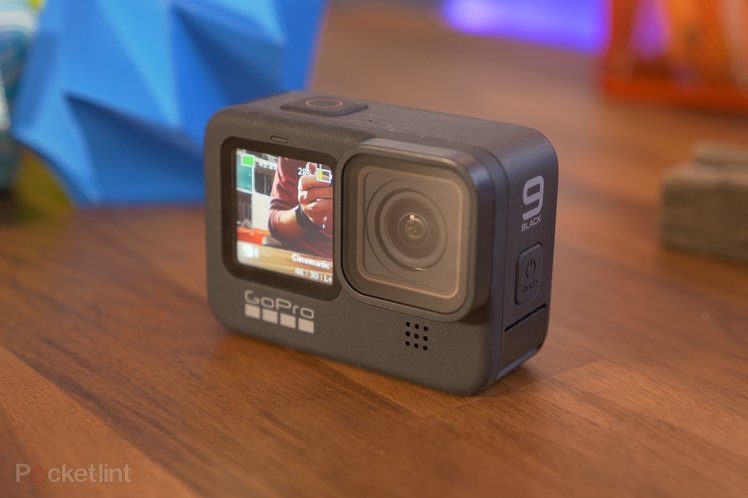 The name GoPro is synonymous with the words ‘action camera’. Without the former, the latter would likely not exist in the same way.

But despite that – what with the advancement of smartphone video camera capabilities and improvements over the years – the GoPro has seen its relevance and subsequently, its popularity, reduce.

So how does GoPro continue to develop while trying to stay current? All the solutions to that problem could lie in its most powerful camera to date: the Hero 9 Black.

Anyone even remotely familiar with how GoPro products tend to look will immediately recognise the Hero 9 Black. It has all the hallmark features of a GoPro – even if this is the biggest Hero design change since the Hero 5. It’s not quite as big a jump as Hero 4 to Hero 5 was, but it’s still big. In terms of size that is: it’s the largest standard single-camera Hero GoPro has released to date. 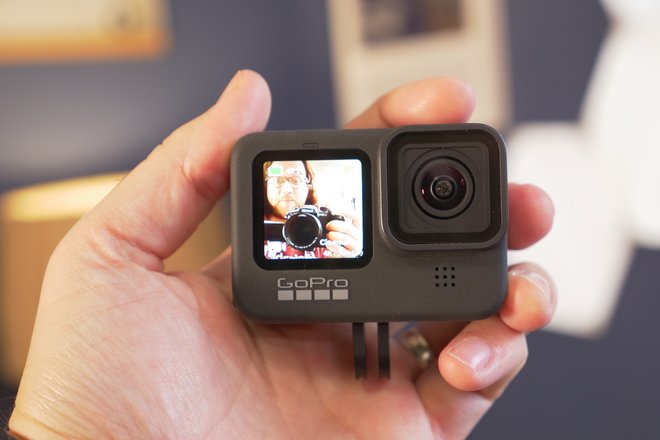 In a way, it was the Hero 8 that paved the way for this size increase, by doing away with the need for any cases for mounting. Instead, the mounting arms are built into the underside of the Hero 9 camera – and that means you don’t need to worry about whether or not the camera will fit in any specific cases or on particular mounts or handles. You just screw it directly onto any of them using the standard screw pin.

The reason that’s such a big deal is that it’s made it possible to improve so much of the hardware, both in terms of practicality and in internal power. Namely, there’s a bigger battery – but more on that later.

As well as that larger size, the other big new Hero 9 feature is he colour screen on the front. Rather than just be a basic monochrome screen with information on your current shooting settings, it actually shows a preview of what you’re shooting so – if you want – you can shoot vlogs facing the camera lens and frame them without any guesswork.

Sure, it’s not as easy to frame as when using the bigger widescreen ratio display on the back, but it’s certainly more useful than the previous data-only approach of its predecessors. 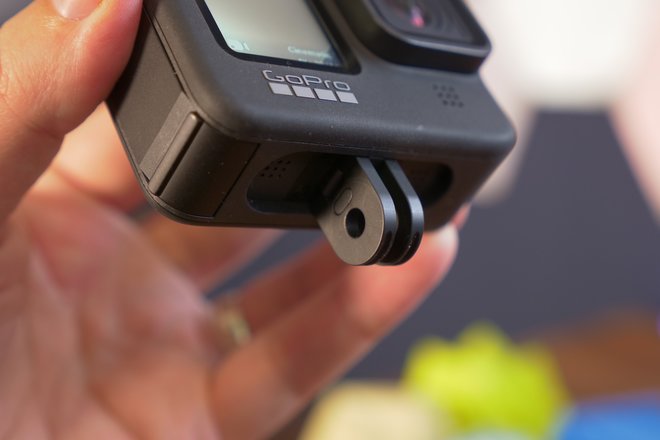 Apart from that, it’s very much the same as other previous Hero cameras: there’s the red button on the top for starting a recording or shooting a photo; then the power/mode button on the left (the one you press-and-hold to switch it on, then tap to cycle through the shooting modes).

What’s interesting is that GoPro has made the water-resistance more efficient in the latest model too. Underneath the mode button is a ‘drain microphone’, which his designed to help drain any excess water out of the camera. It’s not that it’s not well sealed already – the camera is waterproof to 10 metres – it just helps expel water that seeps in and sits around in the camera body if it’s got in through the mic or speaker grille.

One nice new touch we enjoy is the red LED light on the front – just above the screen. It flashes brightly, and is sat right in the middle, so you can easily tell when you’re recording.

The Hero 9 feels substantially more durable compared to previous models too. There’s heft to it, but the door on the side feels sturdier, with a stronger clasp and hinge, while the buttons also feel more clicky and easier to use. On the whole it’s just that bit more solid. 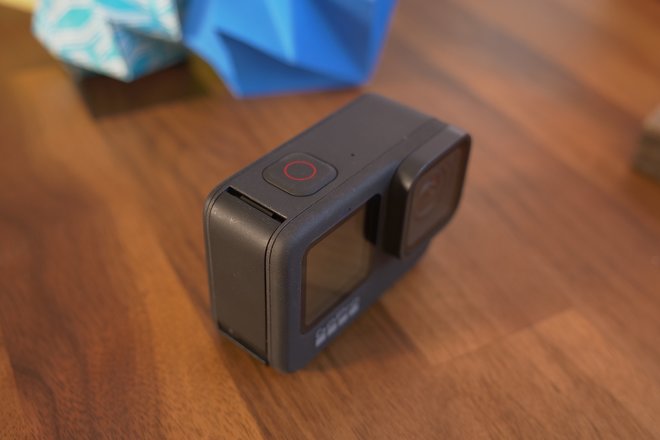 Like the Hero 8, the 9 is also designed to be adaptable and more suitable for those who might consider themselves more than just a casual action camera user. For these pros there are additional mods you can add on, and they include lights, flip over monitors, a shotgun mic and an ultra-wide lens with advanced horizon levelling.

The best kind of technology is the kind that does all the heavy lifting for you. And with the Hero 9 that’s been a major focus point for the company. That’s led to features like the advanced HyperSmooth feature – which combines both electronic and software-based stabilisation to create super smooth footage – just works. Once switched on, its effect is actually quite incredible.

We used our GoPro to film the in-car segments of our Pocket-lint 2020 Awards video, and used it to film some on-robot footage for a robot vacuum promo. What it does in those instances is brilliant.

There’s little to no camera shake at all, but more impressively is the fact that the footage automatically pans smoothly when you turn quickly, or – in the case of the car – stop at a junction, before turning a corner or joining a roundabout. It doesn’t shake or shudder, but crops a little into the footage to then give itself space to move smoothly.

The touchscreen on the back is relatively simple to use once you get the hang of it. There are on-screen icons for enabling features like the HyperSmooth boost, or enabling higher frame rate for slow-motion, or changing the ‘digital lens’ (or crop/focal length).

Swiping down from the top of the screen gets you access to settings like enabling voice activation, onscreen grids, or just getting to connection and device settings (for instance if you want to change the beep volume or connect to your phone). 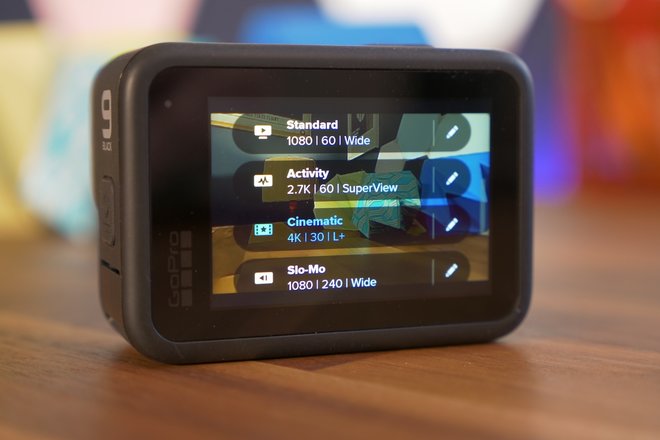 Perhaps the most important improvement with the Hero 9 is the battery life. At no time during testing did we feel panicked or limited by it, and that’s not something that’s been historically true for any GoPro. That larger size and larger capacity are a big bonus point here. Of course, if you’re going to spend a long day out shooting, it’s still worthwhile getting a spare, just to be sure.

It’s in the photo and video quality where you’ll notice the biggest difference between a GoPro and a smartphone camera. A big part of this is that the GoPro has a fixed focus, so struggles to focus on anything close to the lens – so it’s no good for macro shots. Its low-light performance leaves a lot to be desired too.

Indoors with dim light and even outside at night shooting with the enhanced night mode you won’t get photos or video that looks as sharp, stable and bright as those from the modern smartphone’s night mode. Things get a bit noisy and blurry when shooting photos in these conditions.

In fact, when it comes to photography the Hero 9 is not all that hot. In good daylight, shooting wide shots outdoors, you can get nice pictures with vibrant colour and sharp detail. But all of that goes away once you’re in lower light situations or trying to shoot something close-up. It just falls apart creating lots of image noise and losing detail.

There’s really no shortage of resolution and frame-rate options. You can go all the way up to 4K at 60fps or 5K at 30fps if you want, with digital lenses that can switch you between narrow and wide views.

For slow-motion shooting you can switch to 1080p and have it record up to 240fps, shooting at either 16:9 or 4:3 aspect ratio. The variety of options is virtually endless. So whatever kind of action footage you want to shoot, you can.

Our only criticism of the resulting footage is at times there’s a sense that the colours are a bit over-saturated and contrast is too high, while bright spots and highlights often look too bright and overexposed. We don’t expect GoPro cameras to be perfect in that regard though, but quality doesn’t quite match that of decent smartphones, so the real benefit of having it is its durable build and making use of the epic HyperSmooth capabilities.