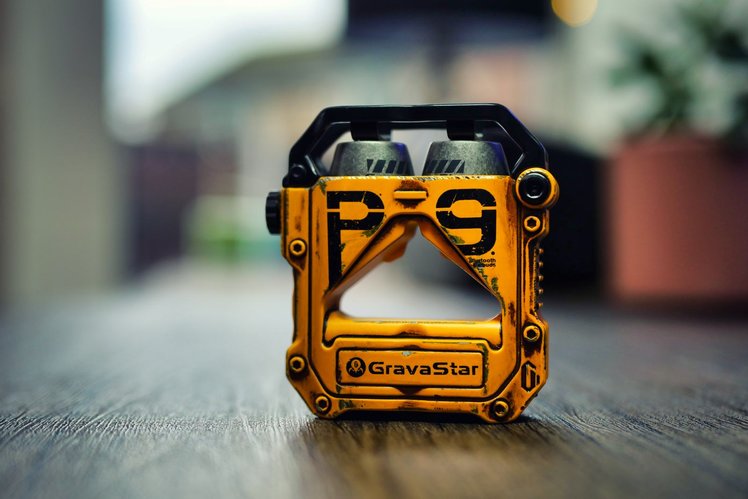 The GravaStar Sirius Pro earbuds have an aesthetic that’s out of this world – quite literally. They look as if they’ve fallen off the back of a time-travelling starship.

Since these wireless earbuds appear as though they’ve fallen off the back of a time-travelling starship, the design is sure to be divisive. For those that dig futuristic looks, though, we’re sure there’s nothing else quite like these.

For those intrigued, then, the real question is whether these earbuds provide stellar audio performance to match their space-age looks.

We put them to the test to find out.

We don’t normally pay too much attention to the packaging at Pocket-lint, but, in this case, it’s definitely worth mentioning. The Sirius Pro earbuds come packaged in a wonderfully detailed plastic hinged case, it looks like the kind of object you might come across in Halo, rather than something that houses your new earbuds and their accessories.

Each box is matched to the finish of the earbuds. For us, that’s ‘war-damaged yellow’, and the box is painted with grime to add to the authenticity. 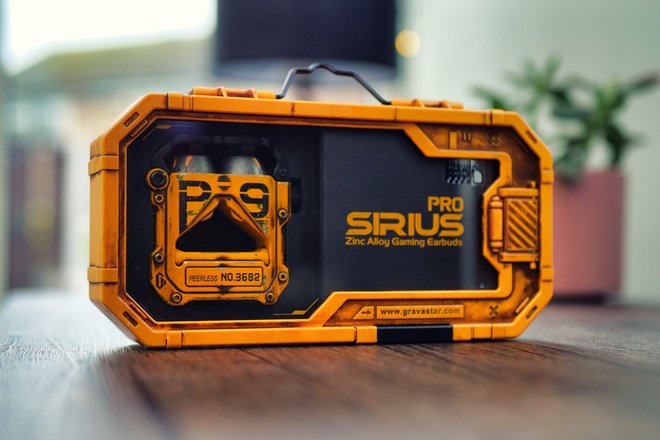 Upon removing the charging case from the box, we were immediately struck by the build quality. The case is weighty (we measured 103g) and the zinc-alloy shell is cool to the touch. That means they’re potentially annoying to lug around in your pocket all day, but they’re a delight to hold.

To remove the earbuds, a button on the side releases the metal retaining arm which flicks open like a switchblade to create a very satisfying effect. We’re not sure if it’s intentional, but it makes for a great fidget toy.

The middle of the case has an unusual triangular cutout with an LED illuminated bar running across the bottom. The LED bar can be controlled by a button on the base of the charging case that allows you to select between 6 different colours. There’s no particular need for this LED bar, other than the fact that it’s cool, and the same could be said about a lot of things on this product. 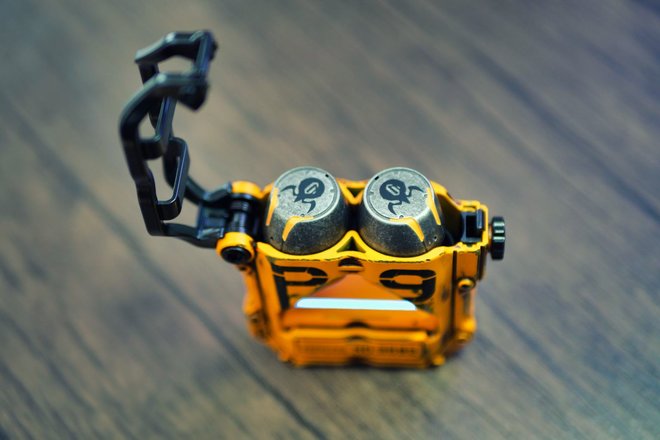 The triangle shape, however, does have a practical use, it allows you to use the Sirius Pro case as a bottle opener. That has got to be a first when it comes to wireless earbuds. Upon testing, we can confirm that it opens bottles with relative ease, even if it’s a little tricky to figure out where to grip it at first. GravaStar says the zinc alloy material means that opening bottles won’t damage or scratch the case, but with our ‘war-damaged’ paint job, we likely wouldn’t notice anyway.

The actual earbuds, when removed from the case, don’t make quite the same impression. They are made entirely from plastic, and the outer section is painted with a realistic worn metal finish. Each earbud features GravaStar’s logo, which is a silhouette of the brand’s robot-turret inspired Bluetooth speaker. 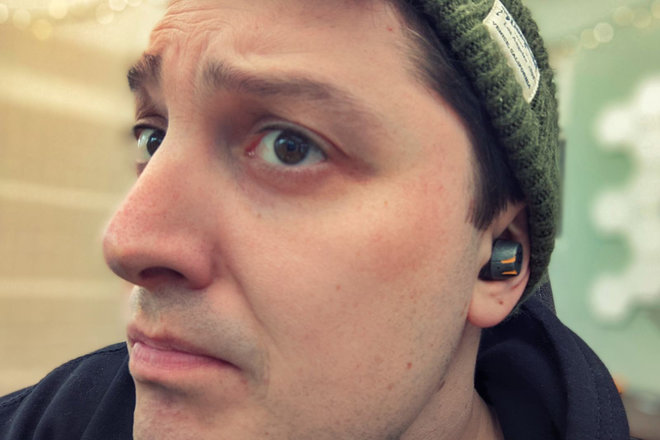 The shape is very ergonomic, and, when paired with the right silicon tip (three sizes are included in the box), they are very comfortable, even after long periods of time. The earbuds have a small profile and don’t protrude from the ear very far at all. We never had an issue with them falling out – including during exercise – and an IPX5 rating means they can handle sweat and light rain without issue.

Also included in the box is a USB-C charging cable, an instruction pamphlet and a necklace with a rubber-attachment loop. That’s right, if just owning the world’s craziest looking earbuds wasn’t enough, you can also wear them around your neck to complete the cyberpunk look.

We weren’t expecting the best sound quality in the world from these earbuds. After all, the incredibly detailed design has to factor into the cost, and they remain relatively affordable.

With that said, we were a little surprised to find that the Sirius Pro sound wonderful – particularly in Music Mode. The bass extends incredibly deep without distorting, and the highs sparkle with detail. We loved listening to these earbuds; it’s a really pleasing and lively sound that we were keen to keep coming back to.

If we were to be critical, we could say that the sound is possibly a little too ‘V-shaped’ and could use more vocal presence. However, we feel the sound produced by these earbuds matches, and perhaps surpasses, similarly-priced earbuds from the household names. 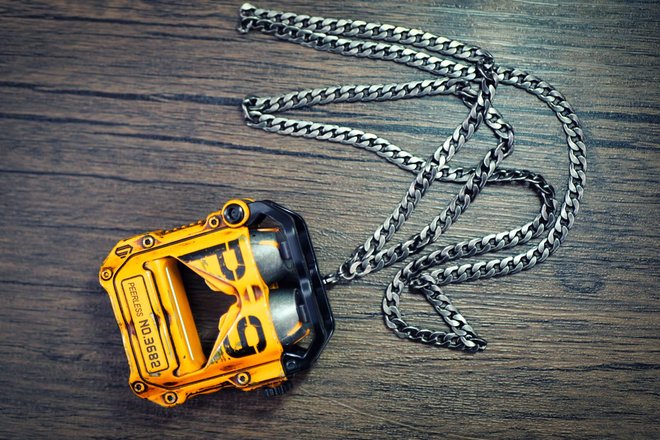 GravaStar advertises these as gaming earbuds, in part because of their low-latency Bluetooth 5.2 link, but also because they feature a Game Mode that uses an onboard DSP to deliver a virtual surround sound experience.

We tried it out playing CSGO on Windows and noted that the Game Mode made footsteps more pronounced and allowed us to be more spatially aware in-game. It’s not as pleasant of a sound signature, and it sacrifices some sound quality in order to get the latency as low as possible, but it achieves what it sets out to, and that could be very good news for fans of competitive titles. 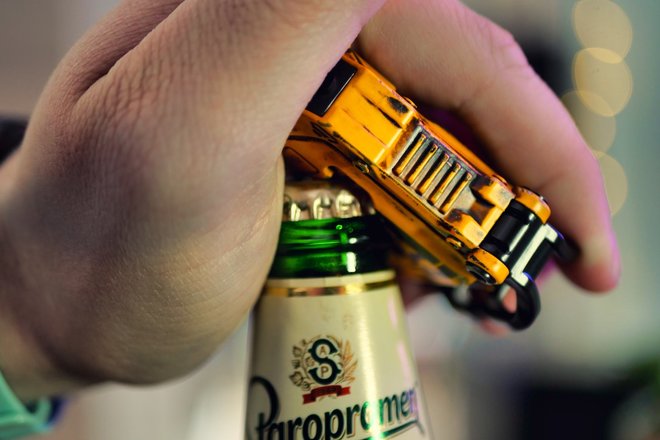 The final listening mode is Movie Mode, which finds itself in a kind of middle ground between Music and Gaming Mode. The soundstage is widened thanks to the virtual surround effect, but more bass is retained. The result is, perhaps unsurprisingly, a profile that’s very good for watching movies. However, we also liked Movie Mode for certain genres of music, particularly dance and electronic tracks.

The microphone quality on these earbuds is nothing to write home about, but still slightly above average. They’re definitely good enough for taking phone calls, and maybe in-game communications, too.

Among all the mode switching for our sound tests, we ran into our first major shortcoming: the touch controls.

These just aren’t as responsive as we would have liked. We found our left earbud particularly troublesome, which is likely a fault and not a widespread issue, but it made it occasionally impossible to triple-tap in order to enter Movie Mode. If there was a way to remap these controls, it wouldn’t have been such an issue. With no companion app, though, you’re stuck with the factory control configuration, and that made things quite frustrating.

That said, the lack of an app isn’t all bad – we were happy that all functions are made available via touch controls, we just wished the touch controls worked better. 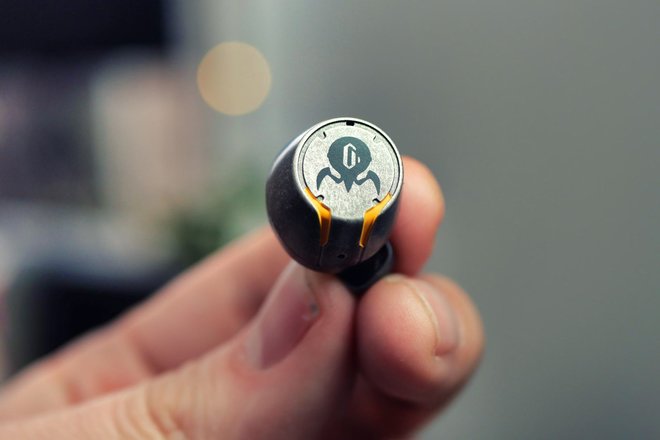 The battery life is serviceable, but the sizable cutout in the charging case means that you don’t get a lot of battery compared to competitors – especially considering the size and weight of the case. It recharges by USB type-C but there’s no fancy fast-charging tech, it’ll take over 3 hours to fully recharge both the case and the earbuds.