The classic Moto Razr was much more than an iconic piece of technology – it was a status symbol. Almost 15 years ago, when candy bar phones were the most prevalent, the Moto Razr captured everyone’s attention with its style quotient, sharp looks, and dazzling metallic colors. The Moto Razr V3 (which was actually the first in the Razr family) is believed to be the world’s best-selling clamshell phone ever. Over the course of four years – i.e. from 2004 to 2008, Motorola brought about various iterations in design but none so compelling and beguiling as the razor-sharp V3. Sadly, over the years, as technology progressed and users migrated to smartphones with touchscreen, buying choices were no longer being dominated by just design. Specifications started playing a big role and it was then that the popularity of clamshells, sliders, candy bars, and other peculiarly designed phones started dwindling. In 2011, Motorola tried to reanimate the Razr branding with the Droid Razr series running Android. However, most of the OG Razr’s fans did not accept a Razr without the iconic sharp edges and foldable design.

Behind the scenes, Motorola kept on working on a foldable smartphone over the last decade, and its vision was just realized last year in November when it launched the Motorola Razr as an Android smartphone with a vertically folding display. We first learned about Motorola’s vision to revive the Razr in January last year, when the WSJ published a report about the intended revival of the phone. Almost a week later, we witnessed the design being registered with the World Intellectual Property Organization (WIPO). Soon after, our Editor-in-Chief, Mishaal Rahman, scored some valuable information about the Razr (codenamed “voyager”) including some preliminary specifications and software features exclusive to the device. Over the course of 2019, we kept getting tidbits about the phone until the official launch later in the year. 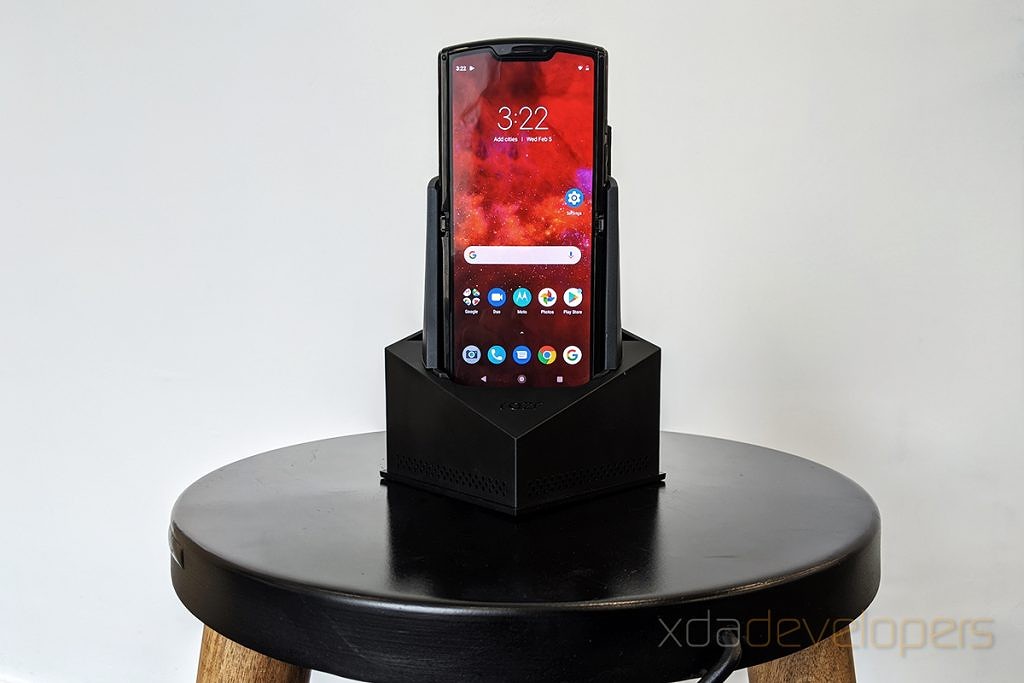 Despite some hiccups in shipments, the phone finally became available in the U.S. earlier this month and Motorola is now vying to bring the Motorola Razr to India. I was invited to the Lenovo-Motorola office in Gurugram, India, for an interactive hands-on session with the new and equally enticing Motorola Razr. Besides letting me take a look at the phone and also allowing me to touch it and challenge the hinge design with vigorous flips, Motorola India also shared some insights about the phone.

But before I start, here’s a recap of the specifications of the new Motorola Razr.

Before I begin with the design, I want to throw some light on the facts shared and claims made by representatives of Motorola India. First, the work on the foldable Motorola Razr Android smartphone began about 10 years ago and the initial design for the phone was ready in 2011. Over the next four years, Motorola made several iterations and multiple prototypes while trying to perfect the design. In the process, Motorola filed for about 100 patents for the hinge that is meant to prevent the display from slacking.

While the final shape of the phone was nearly ready by 2015, the lack of a proper folding screen technology resulted in Motorola having to delay the fold till 2019. The fit of the foldable display was further perfected over around 14 generations to make sure there’s no bulge or crease to hamper the premium experience that this $1,400 phone aims to offer. 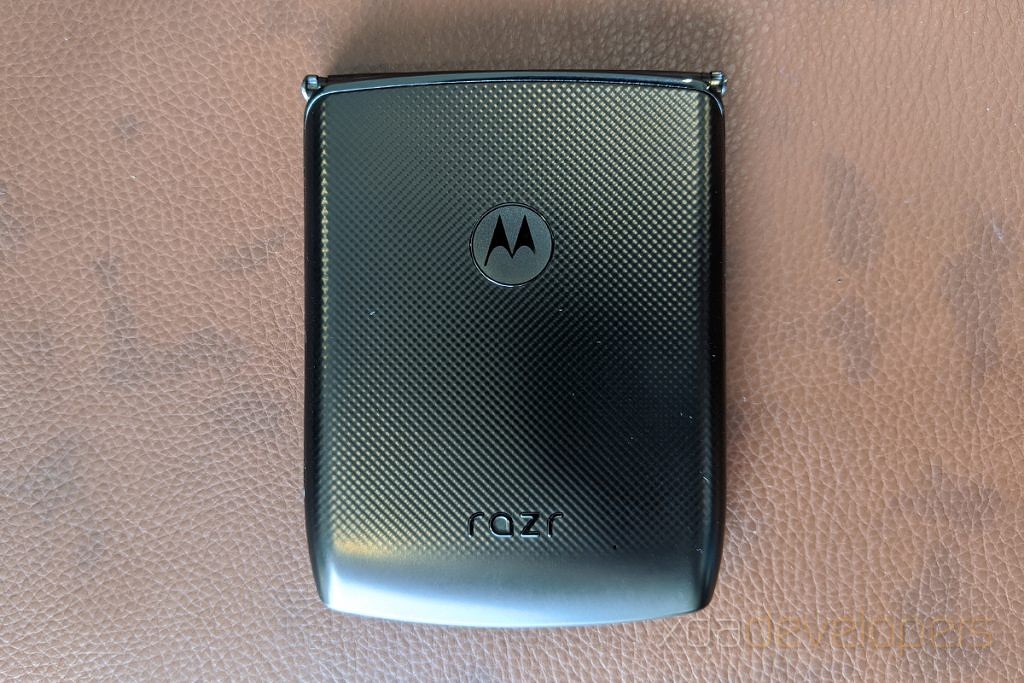 Furthermore, the international media noticed that the Motorola Razr bears a label saying it’s “Made in India.” The brand’s representatives, however, helped me with some insights on this. According to them, while the PCBs for the phone are being assembled in Lenovo’s factory in Sriperambudur, India, the rest of the phone is being made in China. As per the Federal Trade Commission’s regulations, the country of origin of an imported phone is where the PCB or the logic board of the phone is assembled. These regulations may vary with the region. For instance, for the phones to be sold in India, the place of origin is where the majority of the phone – not just the PCB – is assembled. Therefore, the Indian units, when available in India, are most likely to come with a “Made in China” label, instead. Since I did not see an Indian retail unit, I can’t make a solid claim. The prototype unit that I was handling had no clear indication of the place of manufacture.

With these set on the side, let me take you through my impressions of the Motorola Razr’s design.

The Motorola Razr from the very first glimpse appears laced with nostalgia and makes you wanna reach out for it. Even though I’d seen the phone in several photos and videos, I was totally awestruck with the design. Despite being notably chunkier and heavier than the original Moto Razr, the new foldable phone fits very comfortably in the hand. It is also curvier on the edges which improves handling to quite an extent. The phone is bulky but the weight has been shifted towards the lower part so that it doesn’t tend to topple when you’re using it. 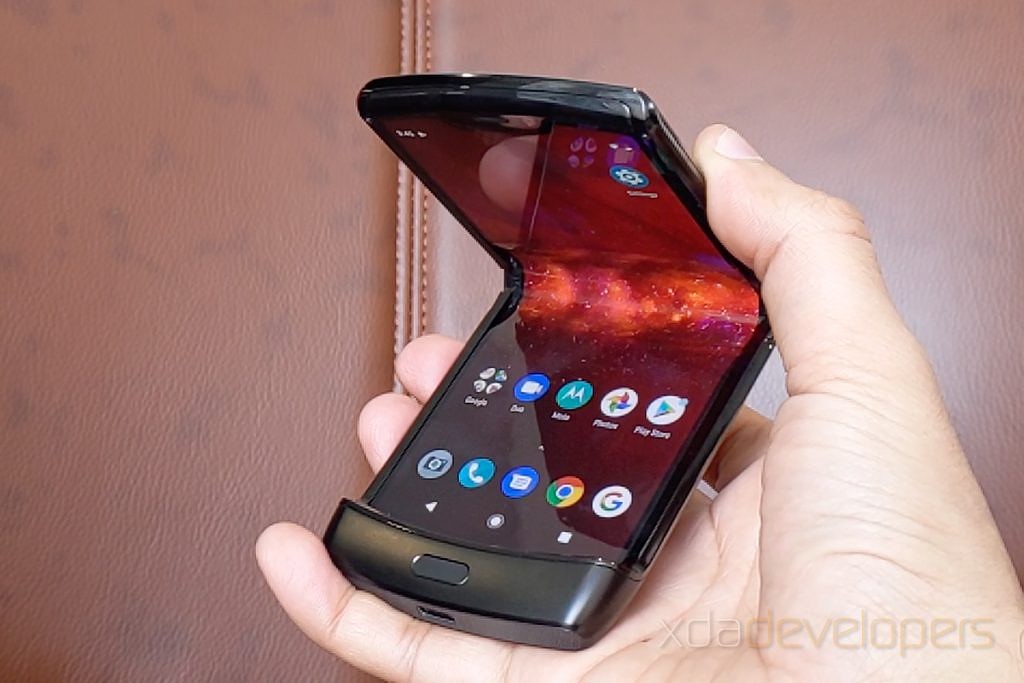 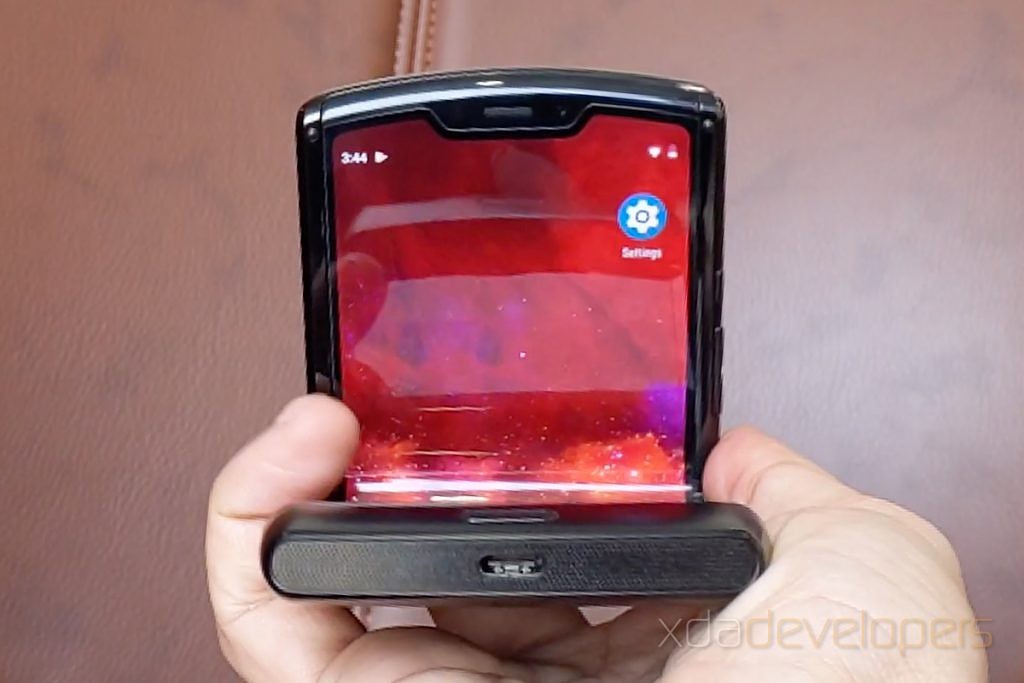 Unlike the older phone, the new Motorola Razr uses much less metal. The lower part of the Razr’s back is made of a rigid polycarbonate with a dotted surface for a good grip while the top half is protected under glass which also covers the 2.69-inch Quick View display and wraps around the periphery of the single camera. The backside of the hinge is made of metal and so are the side edges of the Razr. Despite this change in technology, the Motorola Razr also retains the chin and this houses a capacitive fingerprint scanner on the top. I initially mistook it for a push-button but it is rigid. The bottom of the phone features a USB-C port along with a mono speaker under a metallic grille that encompasses across the entire bottom edge. The volume rocker and the power button are on the upper right side of the phone. 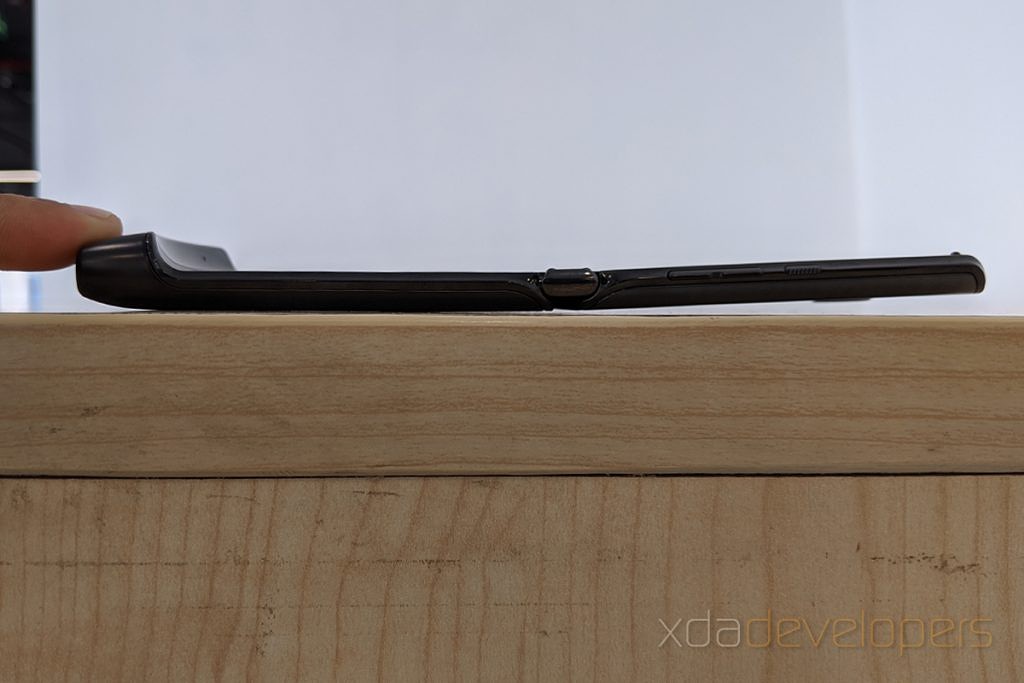 The two sections of the folding Motorola Razr sit completely joined when folded and there’s no gap in between, unlike the Galaxy Fold. This is because of the hinge has scope for the foldable display to get slightly curved inwards when the phone is folded instead of forming a sharp crease. When opened, the Motorola Razr is not entirely flat and the upper half is slightly lifted when the phone rests on a flat surface opened but this should not be a problem for most users. 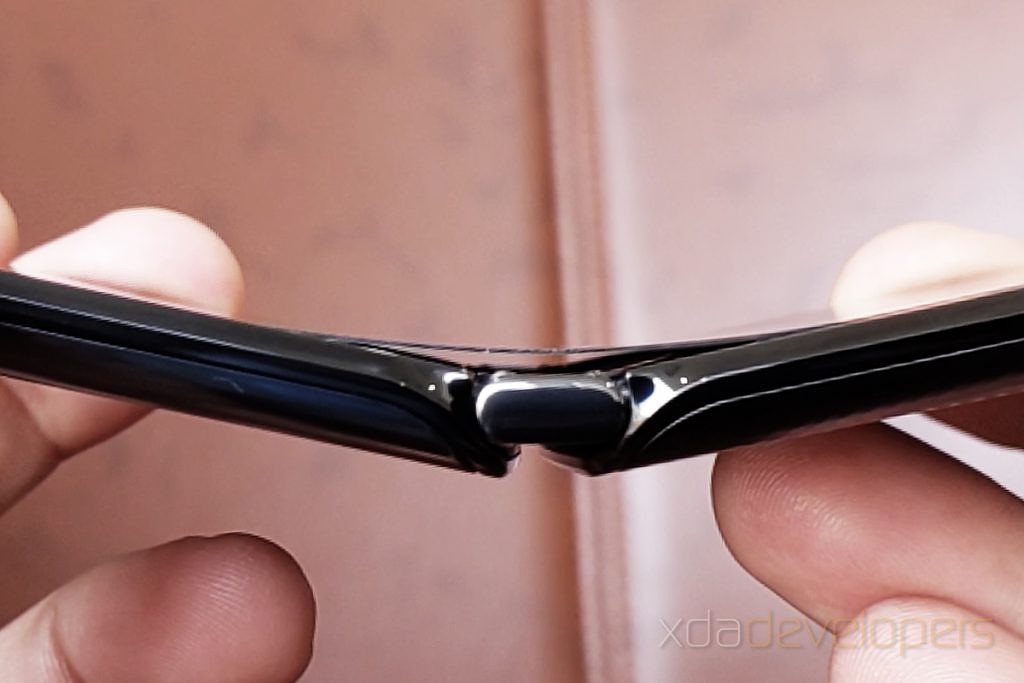 To me, what does seem to be a problem is the slight lift in the display when the phone is being opened. While Motorola claims that the internals of the phone under the display are tightly sealed, the lift can allow dust or small grain-sized particles to enter the area behind the display and cause damage from the behind when the display is flat open. However, it is also possible that the problem is rectified in the production units since the one I was using was a pre-launch prototype. 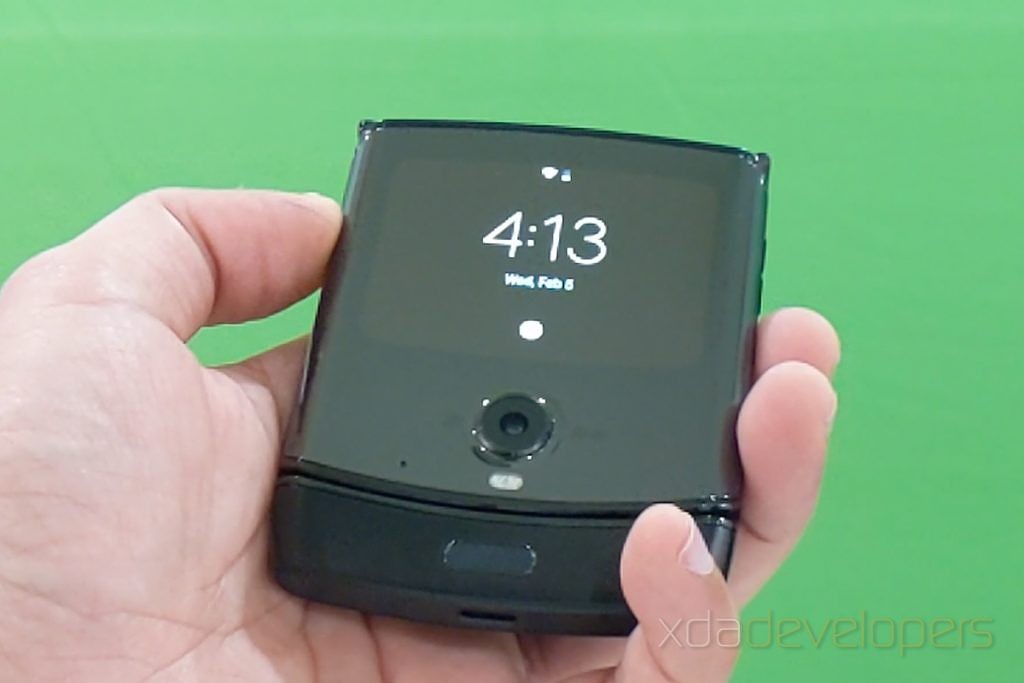 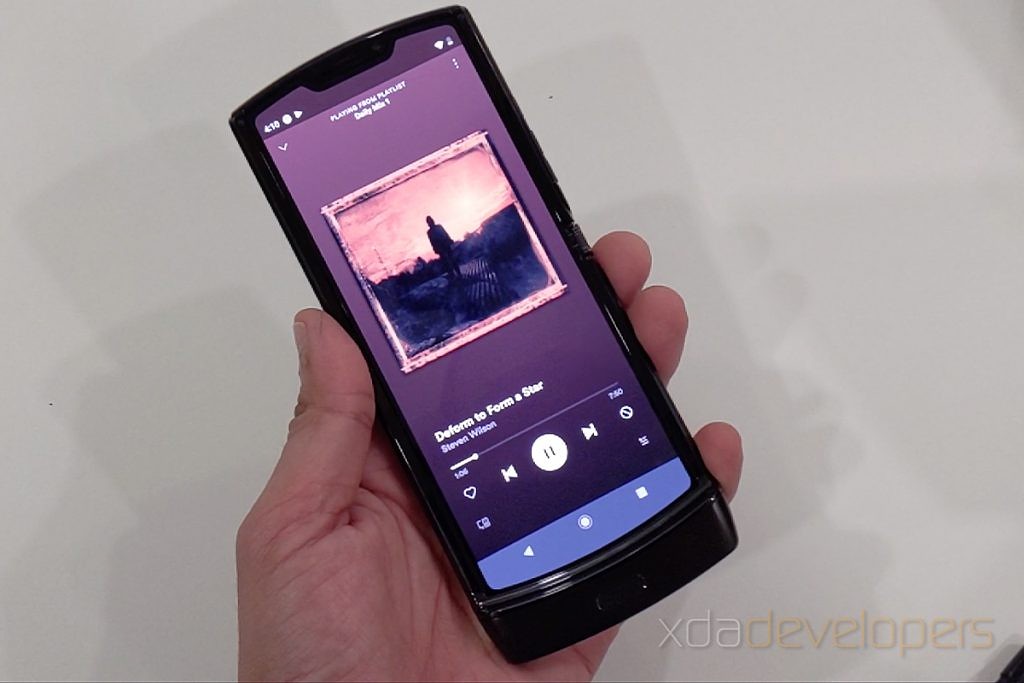 When opened, the Motorola Razr has a 6.2-inch flexible plastic OLED display. The upper and the lower edges of the display are curved to help with the classic shape while there’s a notch on the top for the selfie camera, the earpiece, and the ambient and proximity sensors. There are thin bezels around the display and you can also see the gears of the hinge mechanism that Motorola is very proud of. Inside the chin, there’s a primary microphone while there are three other microphones – i.e. four in total – for spatial audio capture.

The screen is attached to the top bezel around the display but is free from the bottom, such that it slides very slightly when you open or close the phone. As per Motorola, this reduces the stress on the display and also reduced the chances of creases or lumps around the fold – although a recently released marketing video says, “bumps and lumps are normal“. But are they acceptable? Absolutely not! And this is why depending on not just the looping hinge but also the sliding display makes sense. While this could initially freak you out, you should get used to the moving, especially since there’s a negligible chance you’ll use the display while opening or closing the phone. 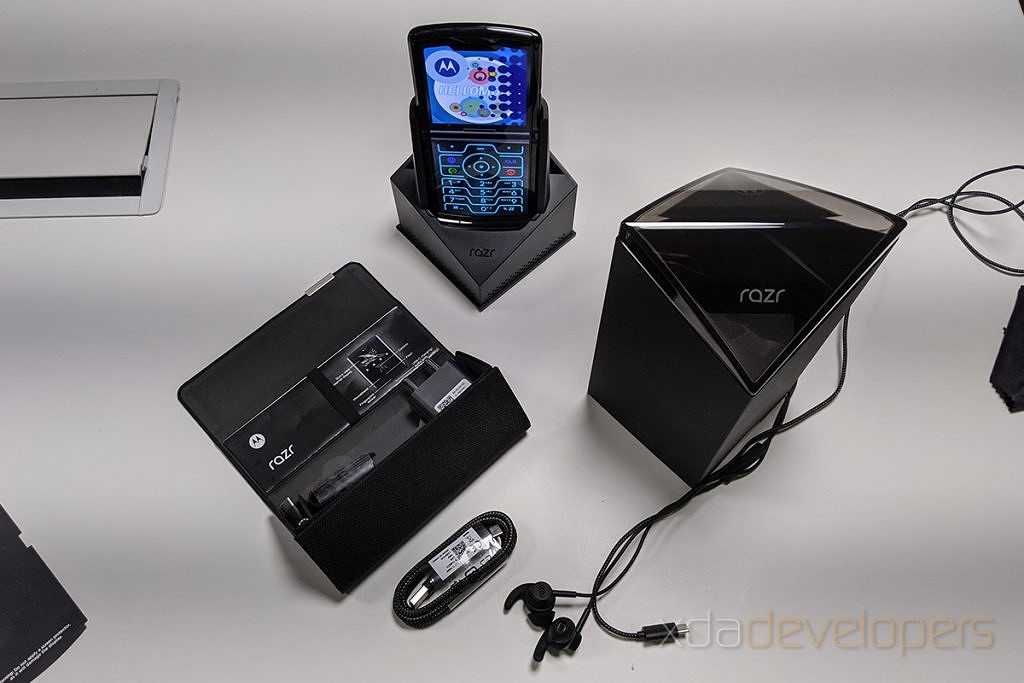 The Motorola Razr runs stock Android currently on Android 9 Pie. Additionally, it has custom software like the Moto Camera and support for Moto gestures for camera and flashlight. You can also trigger the classic mode which launches an interface designed as an homage to the original Razr. 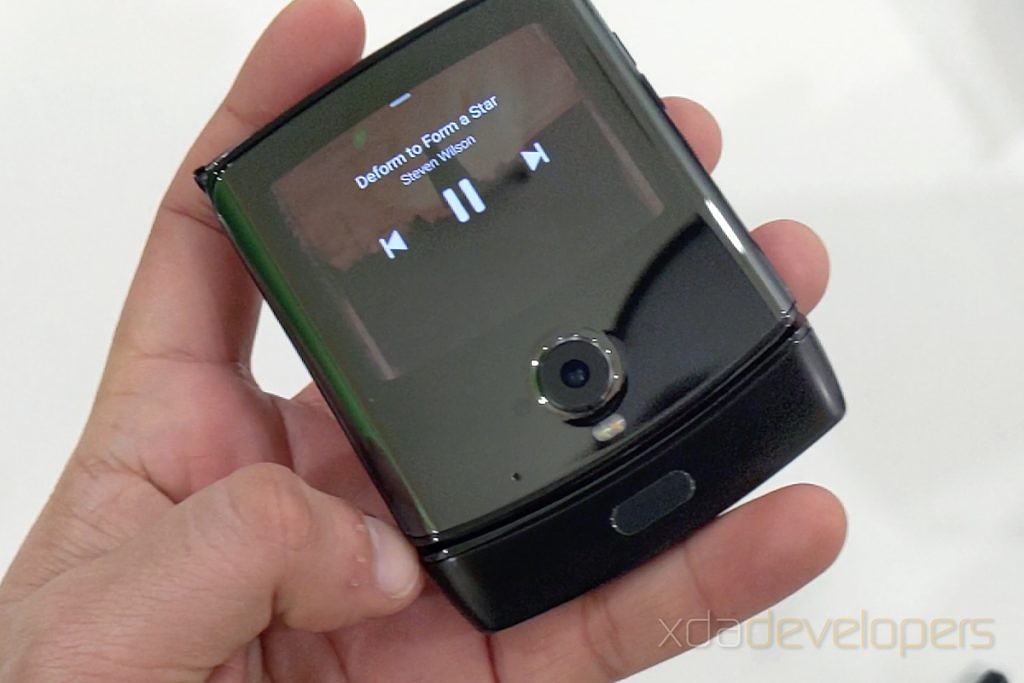 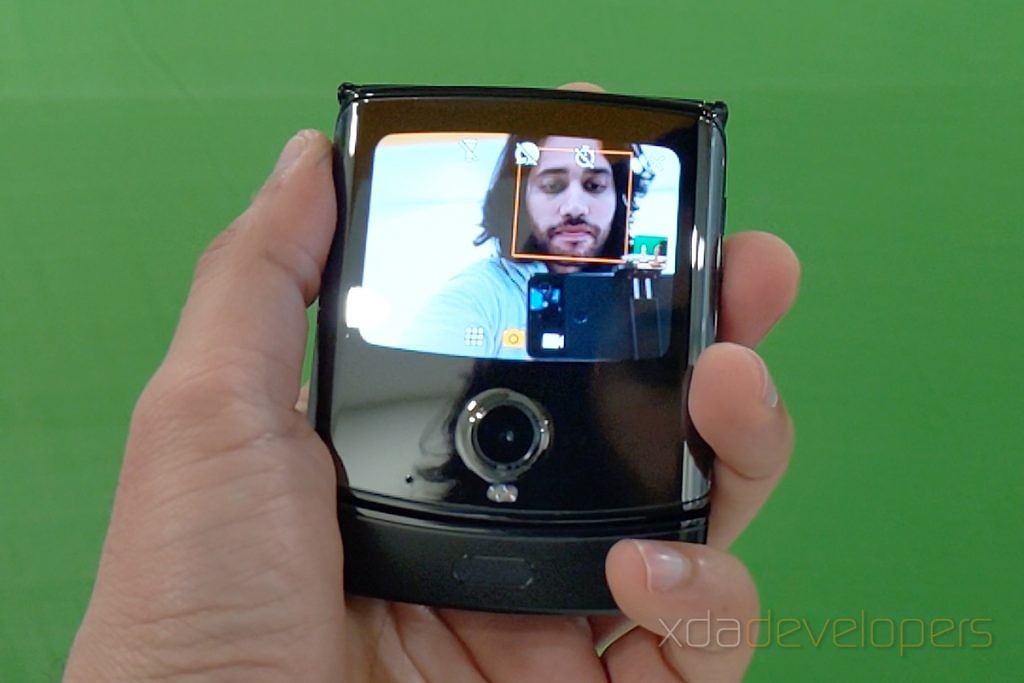 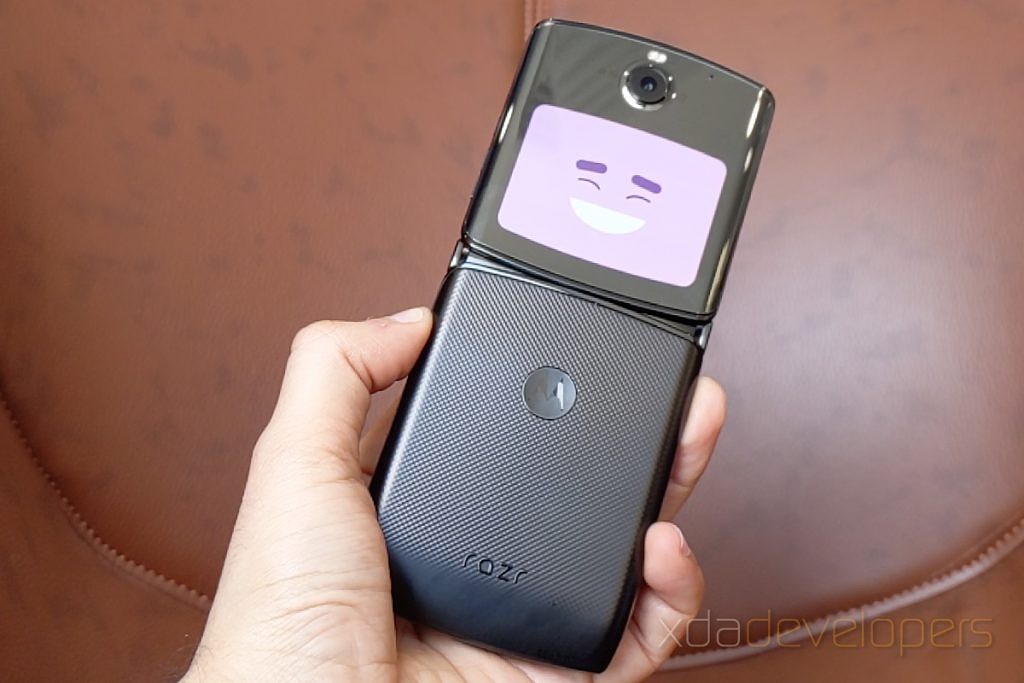 Coming back to the secondary Quick View display, it does not run a full version of Android – unlike Galaxy Fold – but you can use it for a seamless transition with certain music apps like Spotify, Gaana, Wynk Music, etc. When idle, the display shows the time as well as the battery and network statuses. It can also be used as a viewfinder for the camera for selfies – you can simply flick the phone twice to open the camera and tap the screen to click a picture. Additionally, the Quick View display on the Motorola Razr also lets you see notification alerts but you may not be able to see the content of the entire message fully and there’s no way you can reply to the notifications. Motorola is also working to bring support for Google Assitant and Google Maps for the smaller display. Lastly, when you’re clicking pictures of others when the phone is unfolded, the display shows animated smiling emojis to help capture everyone’s attention towards the camera.

All Charms and No Antics

As for the performance, the choice of Snapdragon 710 does feel odd, especially since Samsung has been using flagship chipsets on its foldable devices – Snapdragon 855 on the Galaxy Fold and Snapdragon 855+ on the Galaxy Z Flip. But, Motorola is confident that the phone can handle all the challenges of everyday usage. The target group for the Razr is unlikely to use it for gaming and will primarily use it as a style statement – and, there’s no doubt about the latter.

The Motorola Razr definitely feels like a phone that will attract a lot of attention. But how well will it sell? That depends on the pricing of the phone. In Indian currency, the $1,400 price tag translates to approximately ₹1,00,500 – a premium price that limits the Motorola Razr to the wealthy people in the country.

But, Motorola also told me that they are establishing the Razr as a franchise and will not restrict themselves to a single product. Will they bring more “affordable” phones in the series? We’ll learn soon. Meanwhile, you can also check out the hands-on video that our friends at Pocketnow shot during the international launch of the Motorola Razr:

What are your views on the Motorola Razr? Let us know in the comments below!