One of the criticisms levied at AMD last year was that it released its new Threadripper Pro platform in September but it was vendor-locked at the time to the Lenovo Thinkstation P620. The P620 seems to have sold like hot cakes, and the system design is really neat (we have one in for testing), but the fact that interested parties only have Lenovo as an option was considered a limiting factor for some. Fast forward to the beginning of 2021, and AMD has announced that TR Pro will be made available at retail, allowing other OEMs to also build systems. Alongside this, three motherboard manufacturers have also showcased their upcoming motherboard offerings, and the most anticipated model that received the most plaudits on looks alone was the ASUS. Today, in what appears to be a worldwide exclusive, we have some hands-on access to the ASUS Pro WS WRX80E-SAGE SE WiFi. Yes, it’s a mouthful to say.

Dang, This Thing is Heavy

First thing I noticed when the motherboard was delivered was just how heavy it is. On the scales, the board and box comes to 5.4 kg (11.9 lbs), and the board is most of that. I don’t even think my heaviest laptop weighs that much, and this is a lot more than the motherboard that ASUS made for Intel’s overclockable 28-core Xeon W-3175X a couple years ago. It’s hard to get across in words on a page about the weight, but put it this way, it can replace some dumbbells that is for sure. 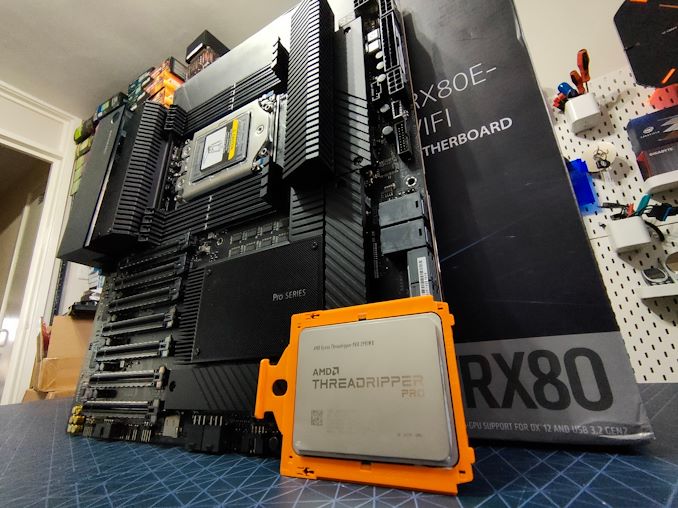 Part of what makes this board so heavy is the size, with this model being a full extended ATX (E-ATX) unit, but also ASUS has built in some proper rigidity support and cooling. On the rear there is a stiffening plate to ensure that the board does not bend when large coolers and add-in cards are being used. 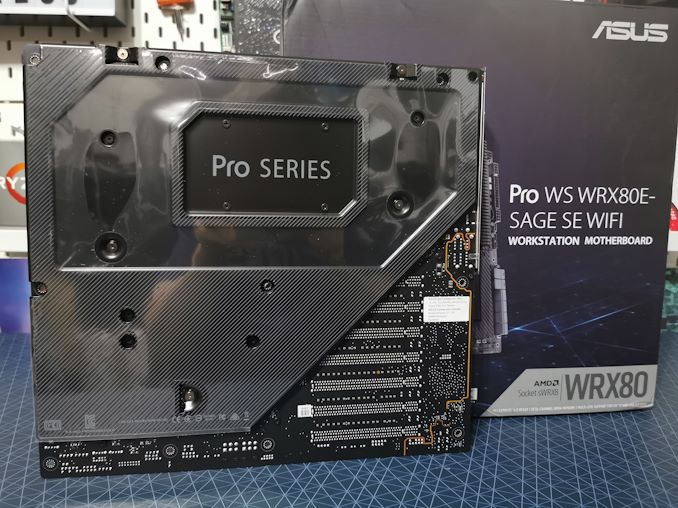 On the front the 16-phase power delivery has this big chunk of anodized metal on top of it that looks to be able to absorb a lot of heat energy. I took this heatsink off the motherboard and weighed it, and it comes in at just shy of 300 grams (0.6 lbs) on its own. 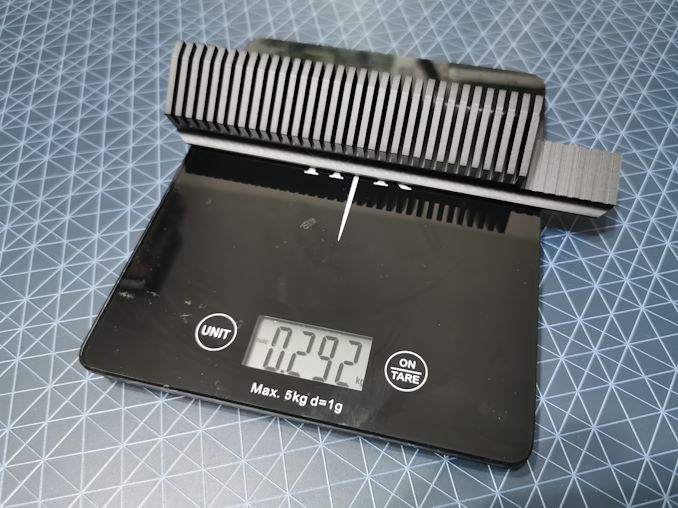 Moving back to that 16-phase power delivery – ASUS has transposed the socket such that the airflow moves across the board, through the memory, and out of the panel IO. This means that the power delivery is aligned differently on the board, and ASUS has provided more than enough here for the Threadripper Pro CPUs. In fact, it is very much overkill – we see modern 240 W EPYC systems built with only six phases per socket being plenty, so the fact that ASUS has gone for 16 here, on a chip that doesn’t have CPU overclocking, seems a bit over the top. I guess one factor in that might be because these boards won’t always be in server-like builds, and might have to deal with a poor airflow consumer chassis. Though anyone buying this should be thinking about also getting a decent case. 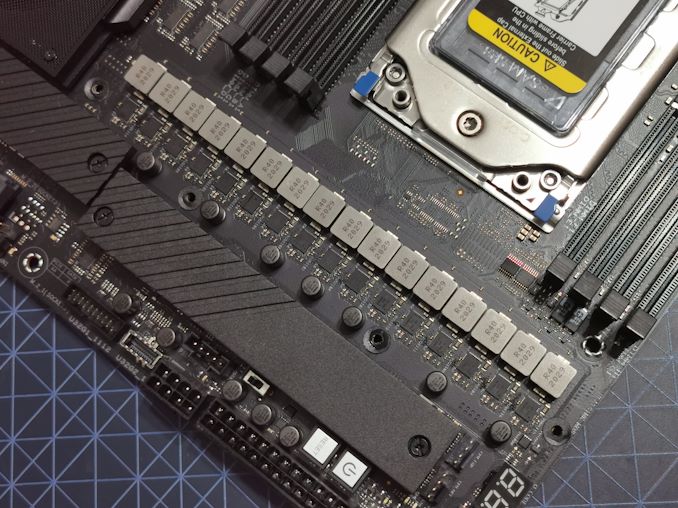 It should be noted that this motherboard is somewhat unique by having three 8-pin CPU connectors, rather than the usual two. Most power supplies won’t come with enough cables or support for three 8-pin CPU connectors, so users must be wary of this requirement. That being said, out of the three headers on the board for these connectors, ASUS has seen fit to reinforce two of them with additional armor support, but not the third. I wonder if the two reinforced ones are actually the ones required for the CPU, and the third is for additional power to the motherboard. 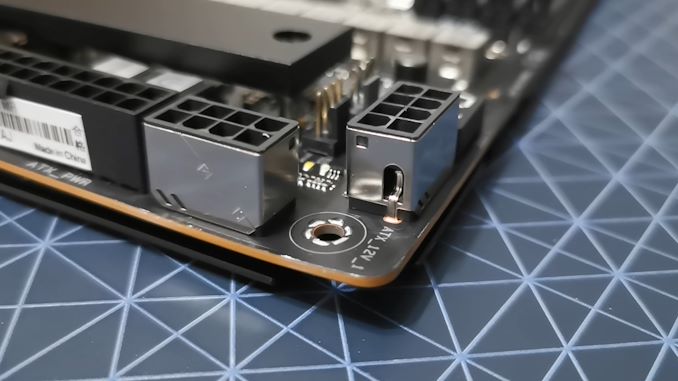 Sticking with cooling, the chipset is covered by a heatsink that is somewhat/but not really connected to the power delivery heatsink, and inside is a fan with a simple metal grille on top. Users might have to get in here to remove dust every now and again, as I can see this grille being filled with dust in the wrong environments. 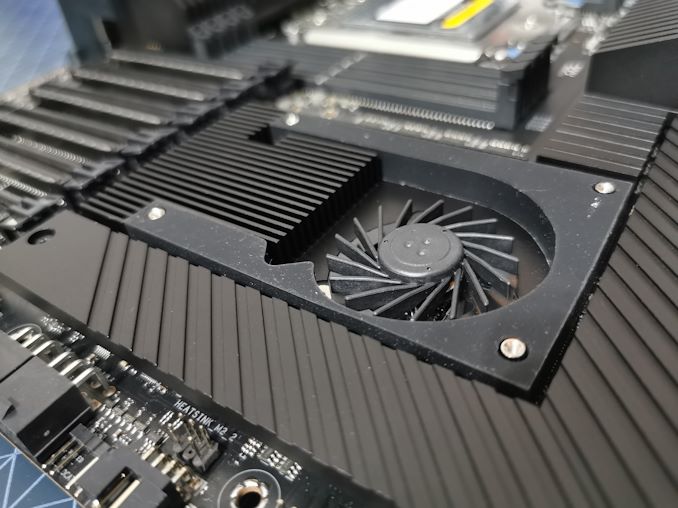 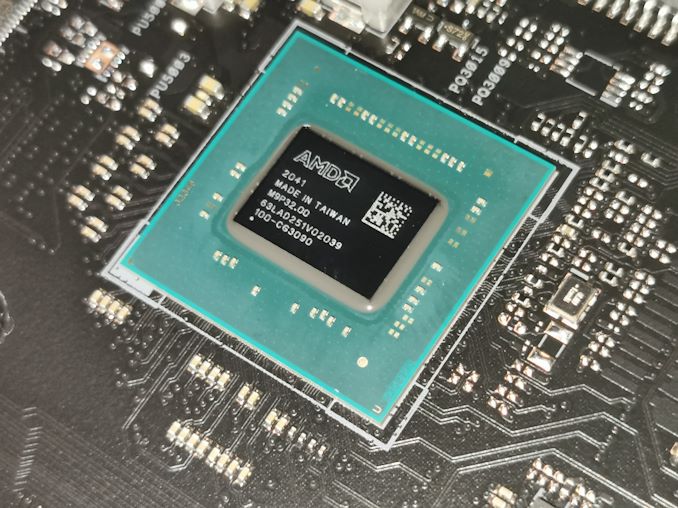 The socket on this board is a standard AMD large LGA-4094 socket, as used with all previous EPYC and TR processors to date, though obviously with the chipset this seems to be locked down to TR Pro CPUs only. Alongside the socket there are eight DDR4-3200 slots, enabling 8-channel memory. Technically TR Pro supports up to 2 TB of memory, though only in 2 DIMMs per channel mode, so the most users can put in here is likely going to be 1 TB with 128 GB LRDIMMs (256 GB LRDIMMs exist, but are quite rare). 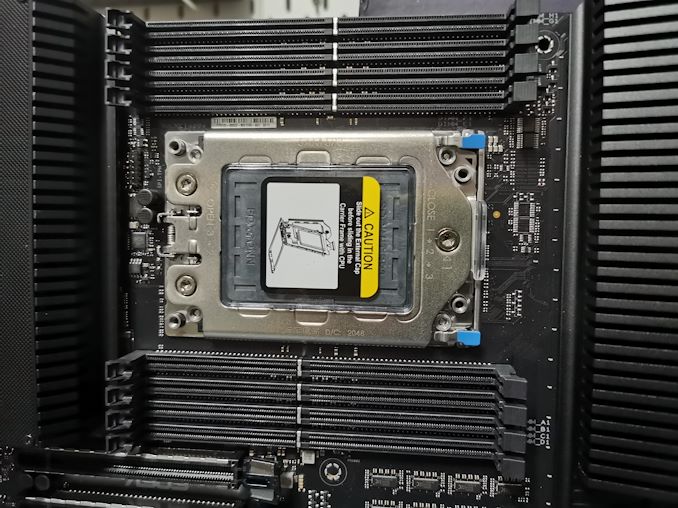 With 128 PCIe 4.0 lanes, there are lots of connectivity options. The easiest way to see this is with the seven full PCIe 4.0 x16 slots on the board, all with reinforced slot armor. Because PCIe 4.0 has limitations on trace length in a PCB, ASUS has had to use some PCIe 4.0 repeaters to get the signal to the bottom slots, but that’s all built in and should work as expected. There are two 6-pin PCIe connectors on the motherboard to help assist the board in supplying 75W of power to all the slots should they all be used at once. Also using PCIe lanes are the three M.2 slots supporting PCIe 4.0 x4 drives, and dual U.2 ports as well. There is an Intel X550-AT2 chipset for dual 10 GbE on the rear panel also using PCIe. 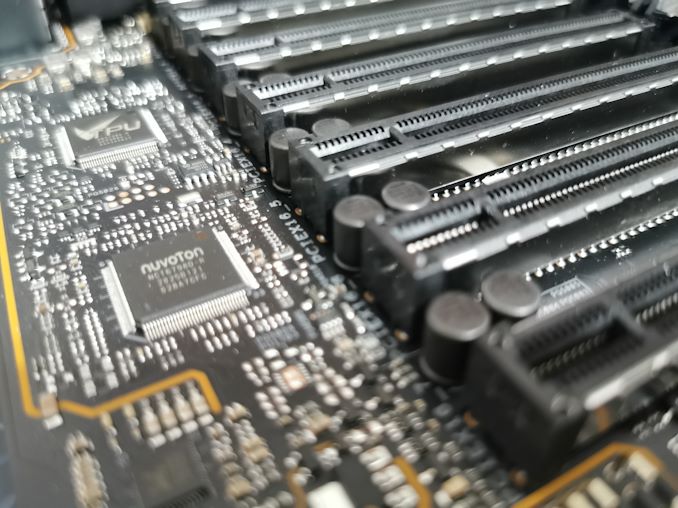 For storage, along with the dual U.2 and triple M.2 there are eight SATA ports. For of these come from the chipset, with the other four supplied by ASMedia ASM1061 controllers. 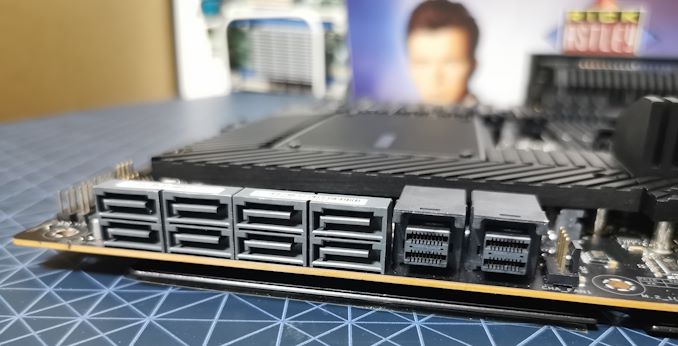 On the rear panel, ASUS has enabled a complete set of USB 3.2 Gen 2 (10 Gbps) support, with eight USB Type-A ports and a Type-C port. There is a second Type-C port, and this goes to 20 Gbps with USB 3.2 Gen 2×2. There’s no USB 2.0 on this rear panel! Alongside these ports are the dual 10 GbE networking ports, Wi-Fi 6 support (we’re told there will be a version of this board without Wi-Fi, for OEMs at least), the Clear CMOS and BIOS Flashback buttons, and the audio outputs coming from the custom ASUS Realtek codec.

The rear panel also has its own dedicated air baffle and shroud to help with cooling and air flow, with an additional fan located in the back here as well.

Unfortunately because this was a quick loaner board not directly from ASUS and we had to give back immediately, it was requested that we don’t spend time testing the board. It is perhaps best if we wait for ASUS’ press/retail sample, rather than test this unit that actually belongs to a local OEM that is designing systems around it. I’d rather not have the opportunity for it to break in my hands in that instance!

Exact availability and pricing is unknown at this point. The last big motherboard ASUS did, for the W-3175X, was close to around $1500 at retail, and the company just announced an $1800 motherboard for Z590, and so it’s hard to place what exactly this TR Pro system will cost, with all the bells and whistles, but no need for overclocking. I’m going to think that for a retail cost it would be very much in that $1200-$1800 range, if not more. Initial units might also be headed to OEMs first, so end-users looking to build their own TR Pro systems might have to wait a bit.

Update: Reports are coming in that the motherboard will be south of 1000 Euros. Compared to some of ASUS’ other offerings, this comes in fairly cheap by comparison.

The name of ‘Threadripper Pro’ is a bit of a misnomer – AMD is using the name because the Threadripper brand already has traction in the markets these processors are aimed at, such as the rendering and animation studios already loaded up on TR but want more memory support and PCIe lanes.

These new TR Pro CPUs are more akin to ‘Workstation EPYC’, as they are more like the EPYC processors (EPYC with higher TDP but slightly reduced DRAM support) rather than the Threadrippers (TR then add ECC support, 8x DRAM support, double PCIe 4.0, DASH manageability).

From our conversations with OEMs, the top three processors are going to be what is widely available. That unique 12-core variant seems to be a part for specific partners, with the OEMs I’ve been speaking to not even having the chance to order it from AMD (the alternative is that the 12-core isn’t ready yet, which I find hard to believe). 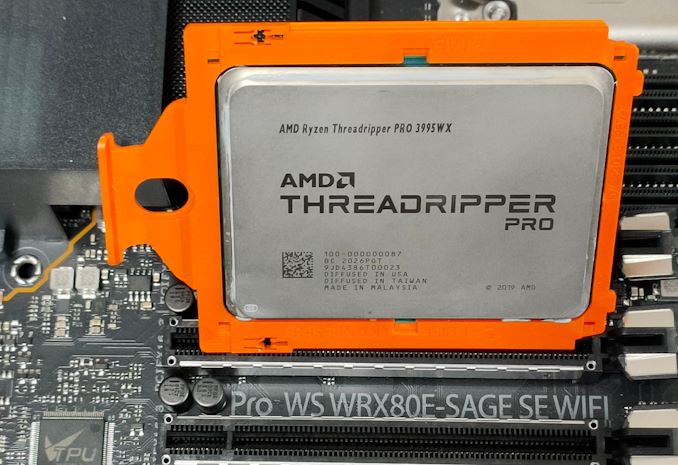 Exact retail pricing for these processors has not been officially announced, however it is expected to fall in line somewhere between the Threadripper and EPYC variants for those that have near identical comparisons, or perhaps slightly above EPYC, given the 280W TDP. That means the 64-core TR Pro 3995WX is likely to be somewhere above $3990 (the TR 3990X) and around the $4425 (EPYC 7702P). Some leaks have suggested this model will be nearer $5000, which may also be down to supply.

Update: Prices are now known, and have been added to the table.

Launch date for these processors is expected to be sooner rather than later. AMD has already stated that it will be launching its new EPYC 7003 ‘Milan’ series processors in March, so I’d expect these parts to be made available before they announce the new enterprise architecture.