The HDMI standard has established itself as a mainstay of the post-HD digital age. While new versions have arrived and speeds have increased, the connectors have remained the same since their initial introduction.

So what’s the difference between standard HDMI, Mini HDMI, and Micro HDMI?

To understand the different varieties of HDMI cables in use, it’s a good idea to get a basic understanding of what HDMI is. HDMI stands for High Definition Multimedia Interface. It’s a digital standard designed to transport video and audio from a source (like a Blu-Ray player or game console) to a display or recorder.

HDMI has seen several iterations, each increasing the bandwidth throughput to allow for higher resolutions and increased framerates. The latest standard is HDMI 2.1, which allows for 48Gbps total throughput, or enough bandwidth for an uncompressed 12-bit 4K HDR signal at 120Hz.

Regardless of whether you’re using full-fat HDMI (also known as Type-A) or a smaller variant, the standard uses 19 pins to carry various signals including video and audio, clocks to keep things in sync, 5V of power, and even Ethernet data.

A standard Type-A HDMI cable, like the one you would find in the back of your TV or a game console, uses a relatively large 14 x 4.55 mm connector that can only be inserted one way.

A standard HDMI cable has the same full-size (Type A) HDMI connector on both ends.

What Is Mini HDMI?

Mini HDMI, also known as Type-C, is a smaller version of the digital interface. The connector measures only 10.42 x 2.42 mm and also features 19 pins, though the arrangement is slightly different from the larger Type-A connector. It’s not uncommon to find HDMI cables with both a Type-A and Mini HDMI (Type-C) connector.

While there is plenty of interface room on larger devices like games consoles and televisions, smaller devices often need to conserve space. This is where Mini HDMI comes in, providing all the benefits of the HDMI interface in a much smaller form factor.

The most common devices that use Mini HDMI are digital cameras and camcorders. Some laptops also use the smaller form factor, as do some smaller computers like the Raspberry Pi Zero.

A cable like this one lets you connect a portable device with a small Mini HDMI port to a TV or monitor with a full-size HDMI port.

What Is Micro HDMI?

Micro HDMI, also known as Type-D, shrinks the interface to an even greater degree. The connector is only 6.4 x 2.8 mm, but all 19-pins are present (though the layout is different from both standard and Mini connectors). Micro HDMI is less prevalent than the other two variants and has fallen by the wayside in recent years.

Some Android phones like the Motorola Droid X, HTC One VX, Samsung Galaxy Note II, and LG Optimus G use these connectors. If these all sound old to you, you’d be right. Most Android phones now use the more ubiquitous USB-C connection, many of which can support HDMI output using a USB-C to HDMI adapter. 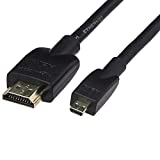 This cable will let you connect devices with Micro HDMI ports to displays with a full-size HDMI port. However, they’re becoming less widespread, and most newer devices will include Mini HDMI instead.

HDMI Is Here to Stay (For Now)

The beauty of HDMI is how each new iteration maintains compatibility with previous versions. You can take an HDMI connection from an old laptop or Xbox 360 console and display it with no issues on a brand new 8K television.

Contrast this with older analog standards which often require intermediary devices to convert SCART, component, S-video, or similar connections to digital-ready HDMI. Without such an interface it’s difficult to display older consoles and computers on a modern television.

The latest standard of HDMI 2.1 is fairly new, with the first source devices like the Xbox Series X, PlayStation 5, and NVIDIA’s 30-Series graphics cards arriving in 2020. While standards are constantly moving forward, HDMI 2.1 provides more than enough bandwidth for the foreseeable future.

The Type-A connector is ubiquitous, and cables are easy to come by. If HDMI were to be replaced USB-C would likely be a prime candidate. HDMI over USB-C is already possible, though HDCP 2.2 support is currently limited to HDMI.

The only other technology that might unseat HDMI is some sort of wireless standard. While wireless display technology is useful for portable devices (and technologies like AirPlay already enable it), wireless technologies are notoriously vulnerable to interference. Thus, it makes little sense for static devices like game consoles or Blu-Ray players to use a wireless connection, even if it cuts down on cable clutter.

If you need to use a Mini or Micro HDMI (Type-C and Type-D) cable, your device probably came with one. Since most of these devices are limited to 4K and below (even at 60Hz), there’s no need to worry about HDMI 2.1 in these instances.

If you are buying an HDMI 2.1 cable, you can use a mobile app to verify that your cables have passed certification. New consoles like the Xbox Series X and PlayStation 5 will come with HDMI 2.1 cables and replacing these with aftermarket alternatives won’t yield an improvement in image quality.