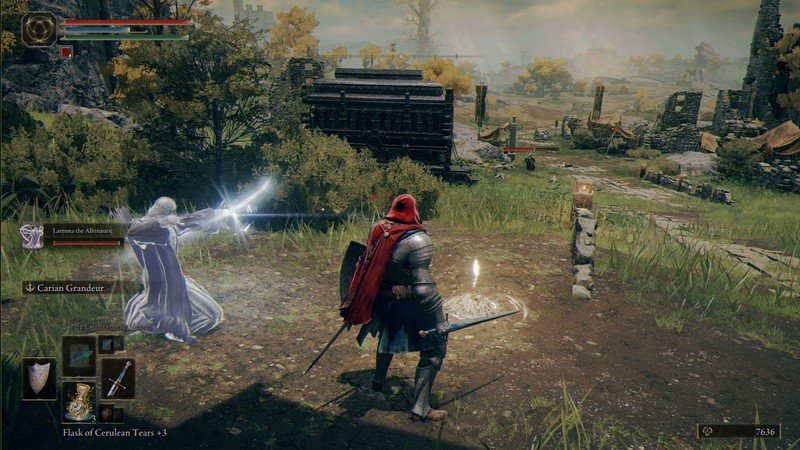 The best allies you can take into battle.

In the many encounters and boss fights that you’ll inevitably find yourself in while exploring Elden Ring’s open world, you’ll have the ability to conjure Spirit Ash Summons. These spirits will fight by your side and are extremely helpful in most situations, as they can distract enemies and make it easier for you to hit them, tank some hits, and even dish out solid damage — especially if you upgrade them using the Grave or Ghost Glovewort materials you’ll often find while exploring.

Due to the sheer number of Spirit Ash Summons in the game, though, it can be difficult to know which ones are the best and which ones you should probably avoid using. In this guide, we’ll go over a complete tier list that ranks each Spirit Ash Summon in the game, as well as an overview of all of the best summons, what they do, and where you can find them in the Lands Between. 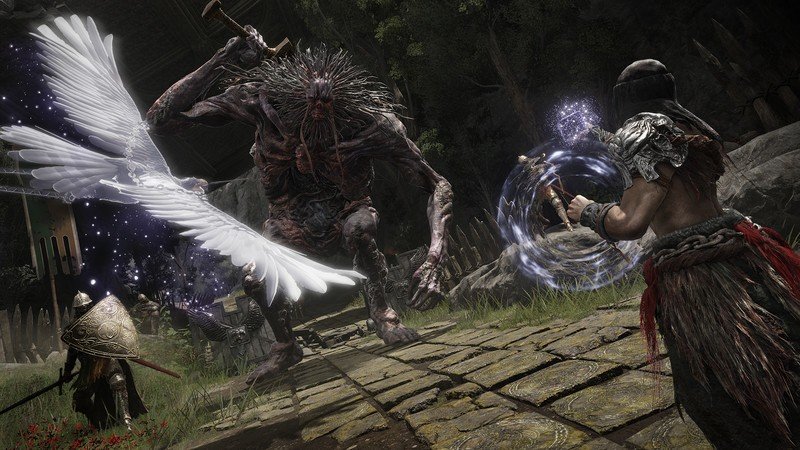 While the vast majority of Elden Ring’s Spirit Ash Summons are very helpful, some of them are more effective than others. With that in mind, we’ve created a definitive tier list that should give you an idea of which ones are the best and which ones aren’t worth upgrading or building your character around.

Note that just because a Spirit Ash Summon is in a low tier, it does not mean that they are useless. It simply means that they’re generally less useful than the summons we put higher on the list. 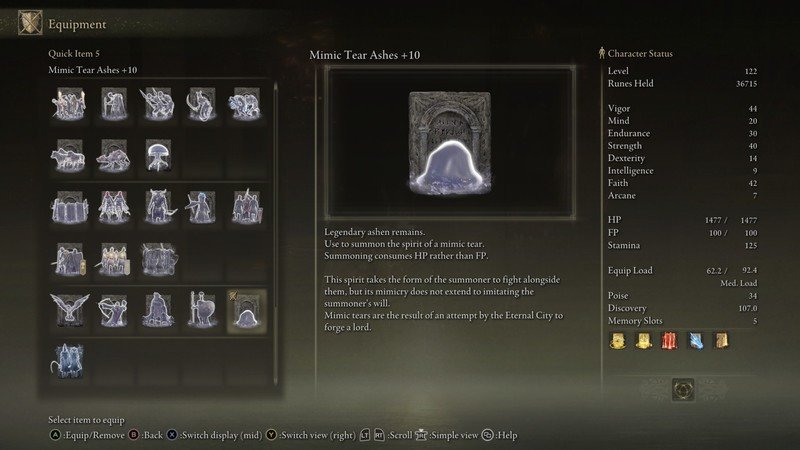 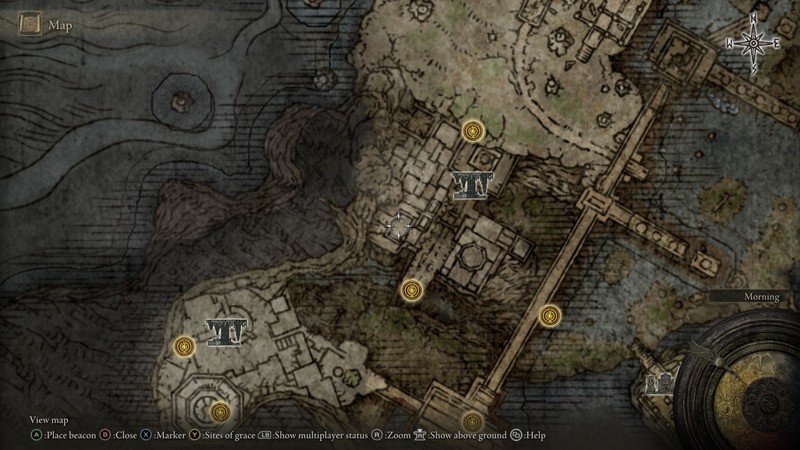 In our view, the Mimic Tear Spirit Summon is the best one available in Elden Ring, even after the recent nerf it got in Patch 1.03. This unique Spirit Summon creates an exact copy of your character when you use it, including your stats, armor, weapons, spells, and equipped consumables. It will then fight alongside you, effectively acting like an NPC ally. When upgraded, the Mimic Tear is incredibly tanky and can dish out plenty of damage, making it an invaluable summon that we highly recommend using in Elden Ring’s challenging boss fights. Note that using the Mimic Tear uses 50% of your HP instead of your mana, so make sure you drink a healing potion after summoning it.

You can find the Mimic Tear Ashes in the southwestern portion of the Night’s Sacred Ground area in Nokron, Eternal City, located in a chest behind a fog wall you need a Stonesword Key to access. There’s an enemy inside the room, but you should be able to get a free backstab on them as long as you don’t sprint up to them. 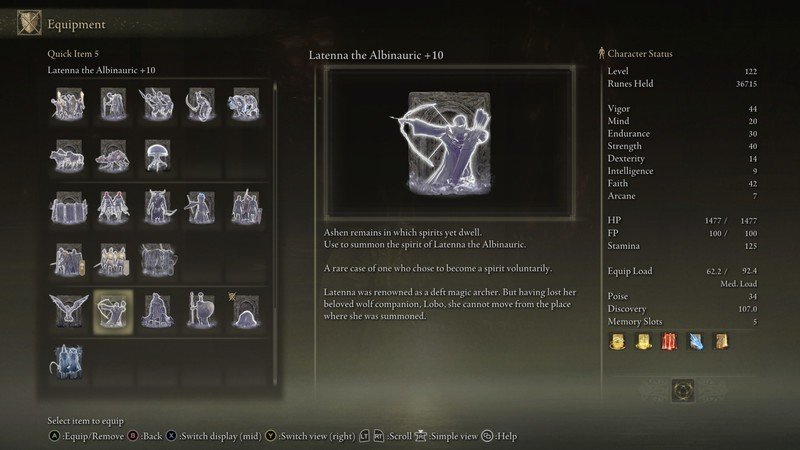 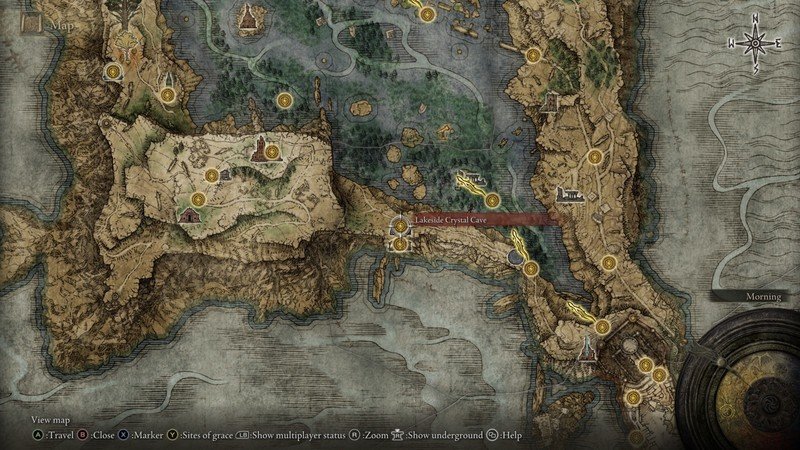 In situations where you’re fighting bosses that have a large arena, the Latenna the Albinauric Spirit Summon will often be your best option. She stays exactly where you summon her and pelts enemies with a constant barrage of heavy-hitting magic arrows, and while she doesn’t have much health, she does have a crazy long range. This means that you can summon her far away from the boss and then engage it with melee yourself, drawing its aggro while Latenna wears it down from afar.

Getting the Latenna the Albinauric Ashes is a little complicated. First, you have to locate and talk to Latenna at the Slumbering Wolf’s Shack in Liurnia of the Lakes, located just after the exit of the Lakeside Crystal Cave. Then you have to travel to the Village of the Albinaurics found west of her position and get the left half of the Secret Haligtree Medallion there. She’ll then give you her Spirit Ash Summon once you show the medallion to her. For more details on how to do this, refer to our guide on how to find the Malenia, Blade of Miquella secret boss. 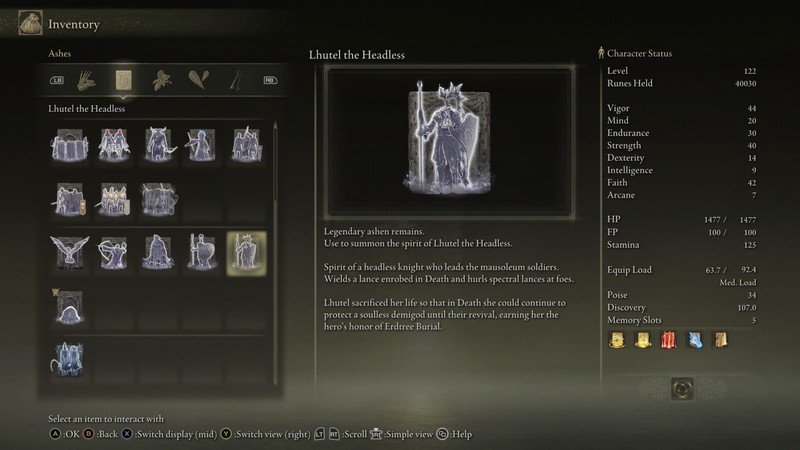 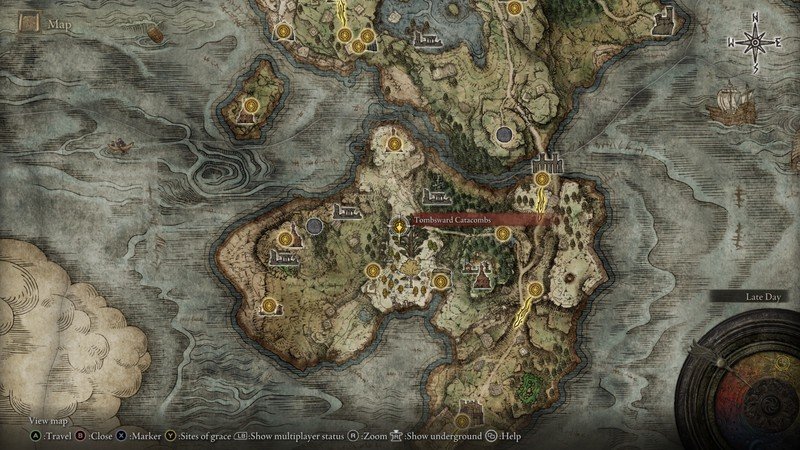 Lhutel the Headless is Elden Ring’s best tank Spirit Summon, as she’s equipped with heavy armor and a greatshield. She can also throw her spear for solid ranged damage and will constantly teleport around enemies, making it difficult for them to hit her. There are better options if you want big damage from your summons, but Lhutel is the best when it comes to soaking up damage and distracting your opponents.

To get Lhutel, you’ll need to complete the Tombsward Catacombs in the center of the Weeping Peninsula region. The dungeon isn’t very challenging and only requires you to beat a fairly easy miniboss, so you shouldn’t have any trouble. 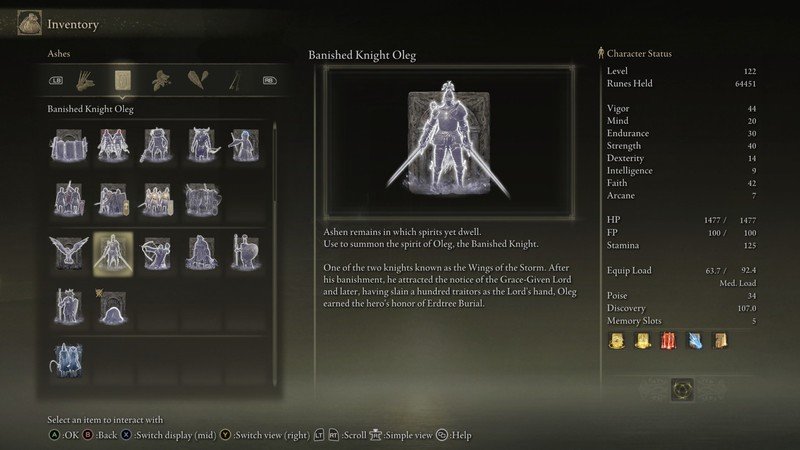 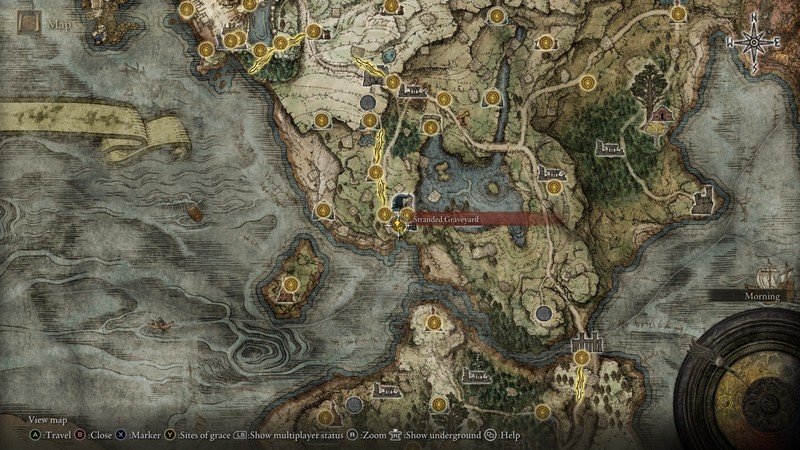 Banished Knight Oleg is one of the earliest Spirit Summons you can get in the game, and he also happens to be one of the best. With his thick, heavy armor and extremely high poise, he’s an excellent brawler that commands the attention of enemies. His wind attacks do great damage, and while they usually don’t stagger bosses, they’ll often break the stance of regular enemies quite easily.

Banished Knight Oleg is awarded to you after you kill the final boss of the Fringefolk Hero’s Grave dungeon located next to the Stranded Graveyard Site of Grace at the start of the game. Note that you’ll need two Stonesword Keys to enter this dungeon. 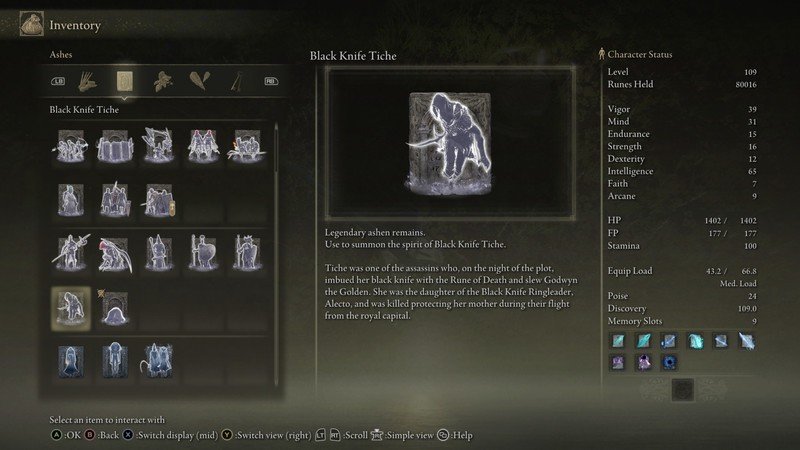 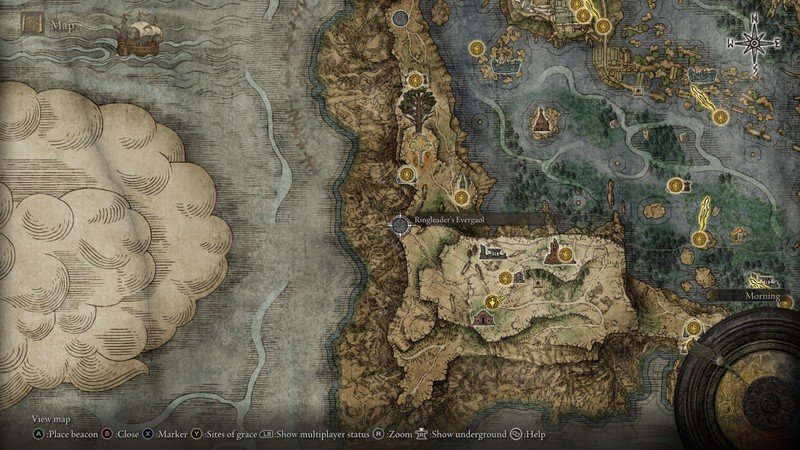 Black Knife Tiche is a very powerful Spirit Summon that not only dishes out strong damage, but is also very good at avoiding incoming damage as well. This is because she dodges very frequently, making it difficult for enemies and bosses to hit her with any of their attacks. Several of her attacks also reduce enemy HP and deal damage over time since her knife is imbued with the power of the Rune of Death, similar to Maliketh, the Black Blade’s greatsword.

To get Black Knife Tiche, you’ll need to defeat the boss at the Ringleader’s Evergaol on the northwestern tip of the Moonlight Altar area in Liurnia of the Lakes. Once the boss is dead, Black Knife Tiche’s Ashes will be awarded to you. 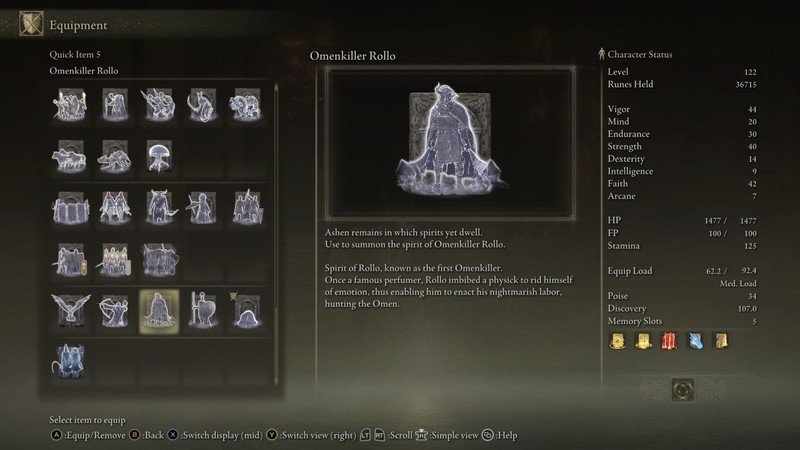 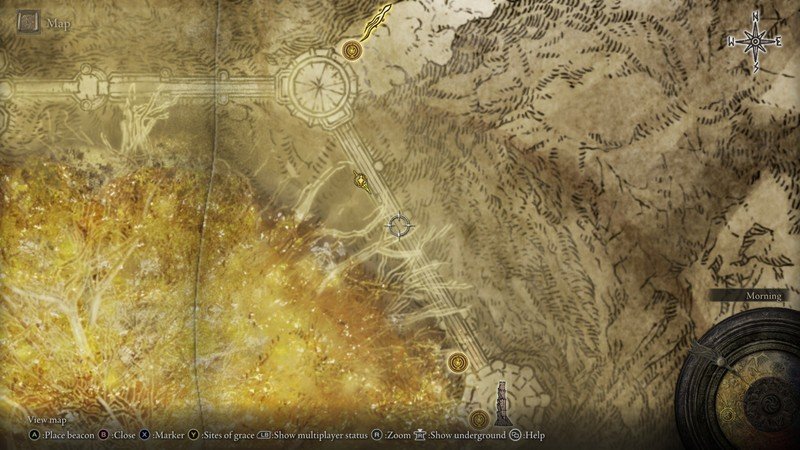 If you’re struggling to deal with enemies or a boss that blocks with shields a lot, look no further than the Omenkiller Rollo Spirit Summon. This summon is identical to the boss you fight at the Village of the Albinaurics, and uses two massive machetes that can easily break the guard of any enemy in the game. These weapons also do an amazing job of stance breaking bosses, giving you an opportunity to crit them with a riposte. Omenkiller Rollo will also occasionally breathe fire if he encounters several enemies at once, crowd controlling them.

You can obtain the Omenkiller Rollo Ashes by defeating the Fell Twin bosses that ambush you on the bridge leading up to the Divine Tower of East Altus. This location is directly next to the elevator that takes you to the Forbidden Lands region. 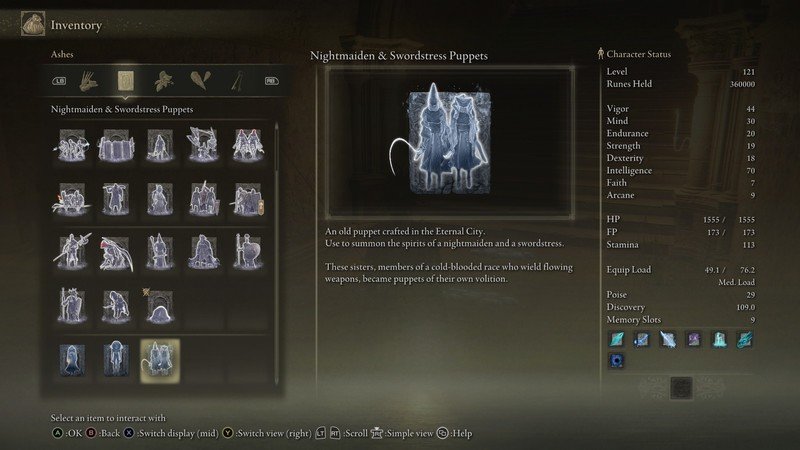 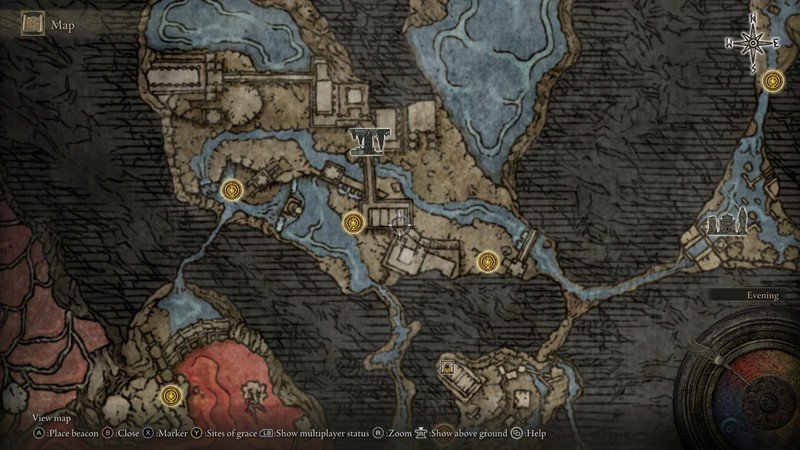 The Nightmaiden and Swordstress Puppets Ashes are an excellent choice if you need versatile summons capable of a variety of different types of offense, though they don’t have much health and won’t last long if you don’t fight closely alongside them. Still, if you keep enemy and boss aggro off of them, they’ll do a huge amount of damage over time together with their wide variety of melee and ranged attacks. Their attacks also do plenty of stance damage, ensuring that whatever you’re fighting will get staggered.

You can obtain the Nightmaiden and Swordstress Puppets in the southern portion of Nokstella, Eternal City, in a chest located behind a barrier that requires a Swordstone Key to open. Note that there are two Nightmaiden enemies guarding the chest, so be ready for a fight. 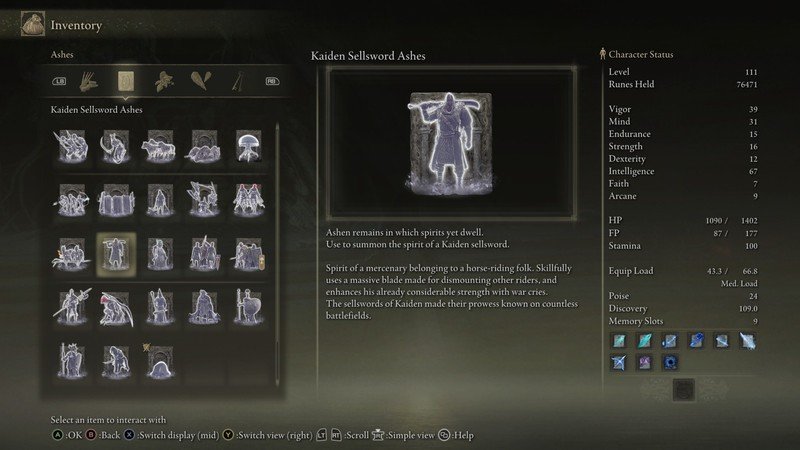 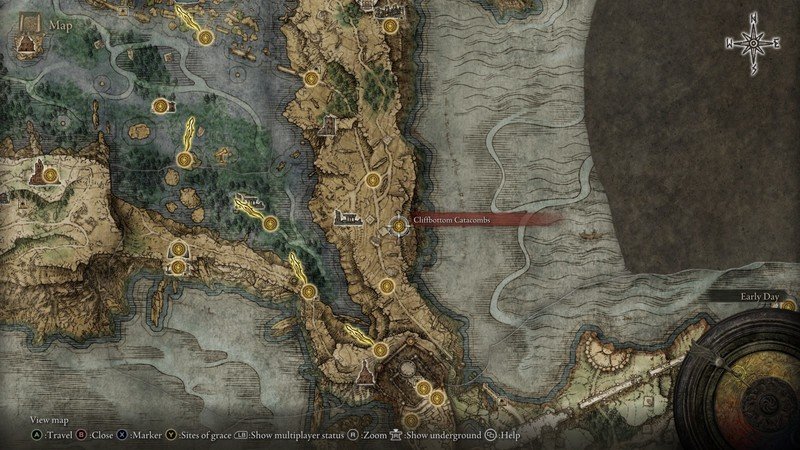 You can get the Kaiden Sellsword Ashes by defeating the final boss of the Cliffbottom Catacombs dungeon, which is located in southeastern Liurnia of the Lakes. 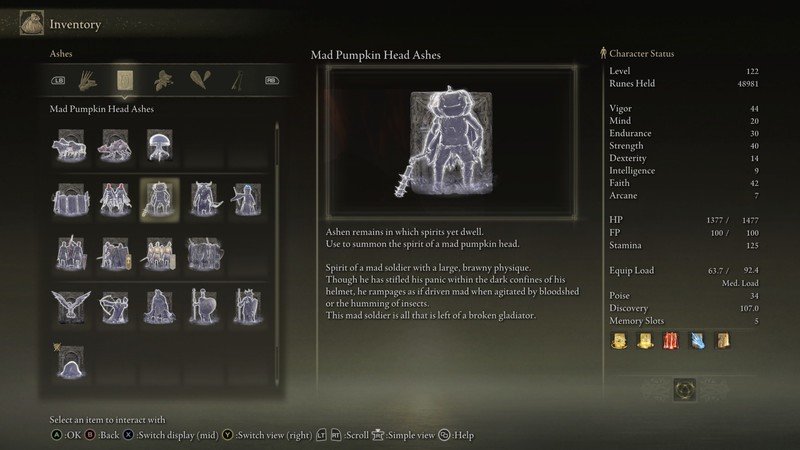 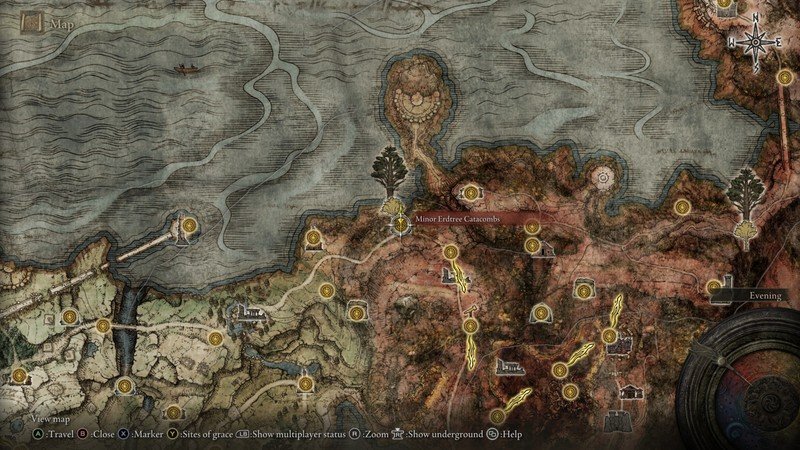 The Mad Pumpkin Head is an excellent summon that can Bleed enemies with his massive flail, and he also has excellent damage protection thanks to the large metal helmet he wears that significantly reduces damage taken from anything that hits it. He’s not as tanky as some other summons, but his ability to Bleed can contribute quite a large chunk of damage during boss fights.

You can get the Mad Pumpkin Head Ashes by defeating the final boss of the Minor Erdtree Catacombs dungeon found on the northwestern tip of the Caelid region. There’s an Erdtree Guardian right next to the dungeon entrance, so be careful when you enter it. 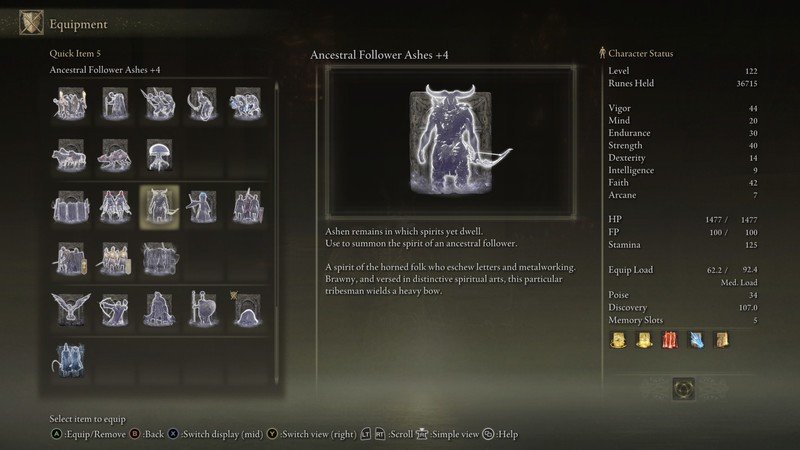 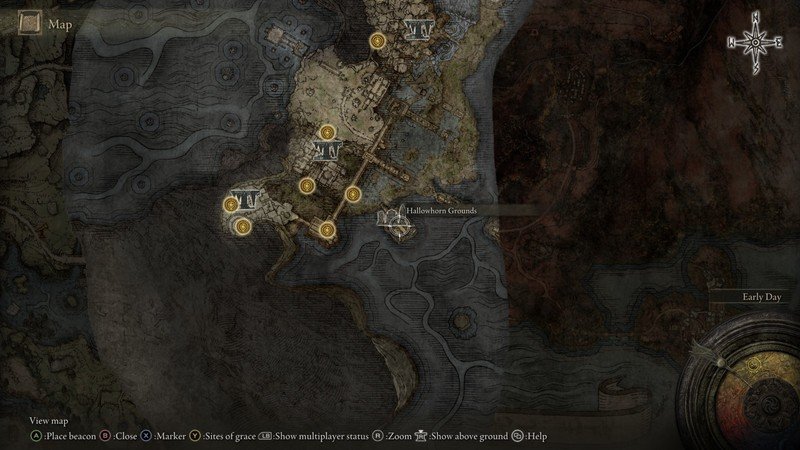 The Ancestral Followers of the Siofra River region are incredibly flexible in combat since they have plenty of health and fight with both bows and with axes. When summoned using the Ancestral Follower Ashes, this spirit will serve as an excellent “jack of all trades, master of none” ally. They’re not as tanky or powerful as other more specialized spirits, but their well-rounded stats and ability to fight at any range makes them incredibly useful.

You can get the Ancestral Follower Ashes by defeating the Ancestor Spirit boss in the Siofra River region. To access this boss, you’ll need to light eight fires in the area and then awaken the spirit in the Hallowhorn Grounds. 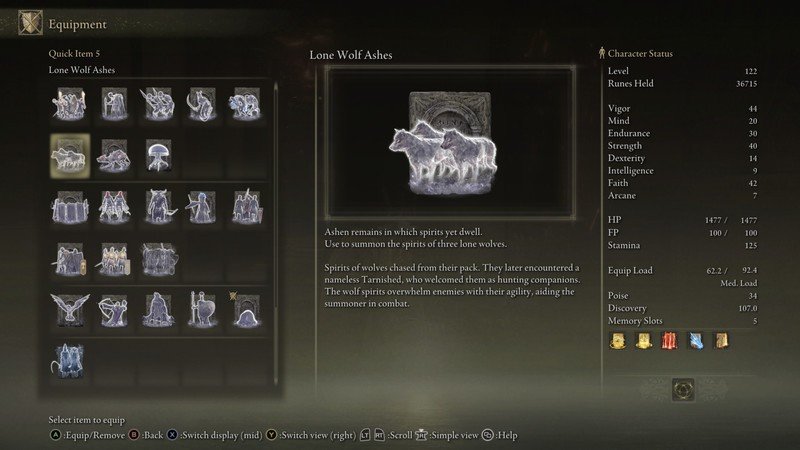 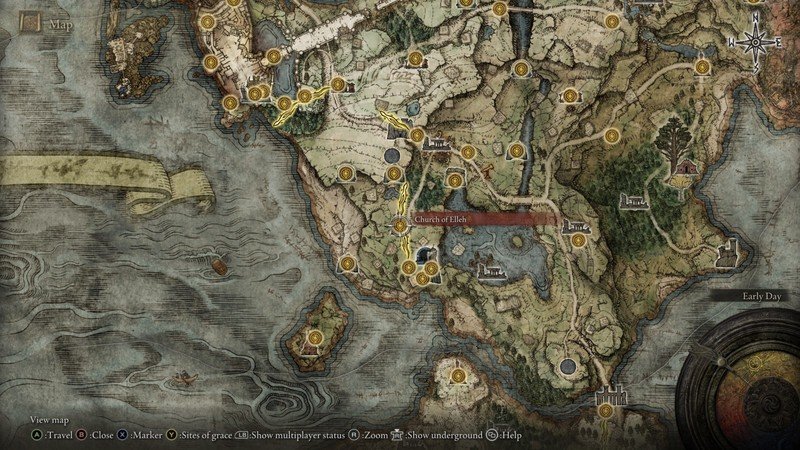 Believe it or not, the first Summon Spirits you get in Elden Ring are also some of the best ones in the entire game once you upgrade them. While the Lone Wolf summon starts off relatively weak due to the pitiful damage and low HP of the three wolves, they become surprisingly tanky when upgraded fully. This, coupled with their high agility and ability to stagger enemies and bosses by breaking their stance with rapid attacks, makes them an incredibly effective Spirit Summon in many instances.

Elden Ring is finally here, and it’s available for $60 on Xbox Series X|S, Xbox One, PS5, PS4, and PC. It’s one of the best Xbox games you can play right now if you’re a fan of challenging RPGs, and we strongly recommend it.

The successor to Dark Souls 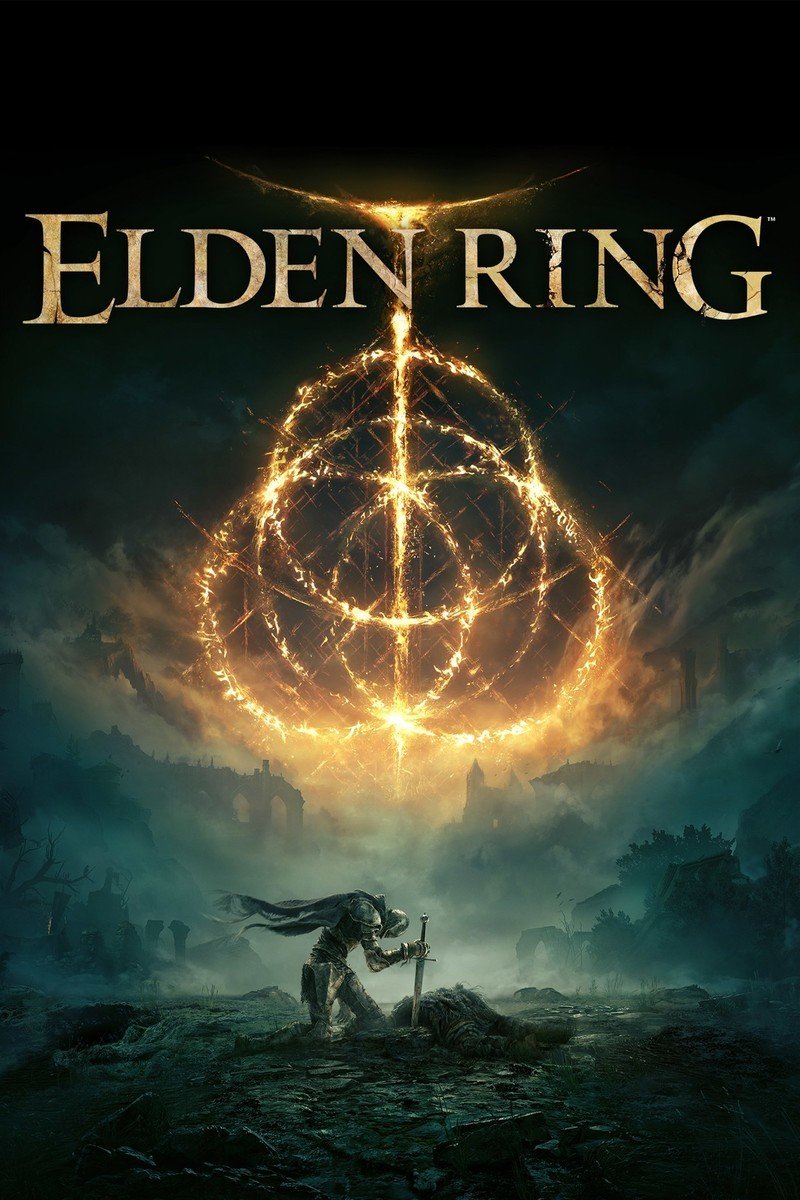 Elden Ring is FromSoftware’s latest fantasy epic, featuring a focus on open-ended design in a universe created by both FromSoftware president Hidetaka Miyazaki and A Song of Ice and Fire author George R.R. Martin.