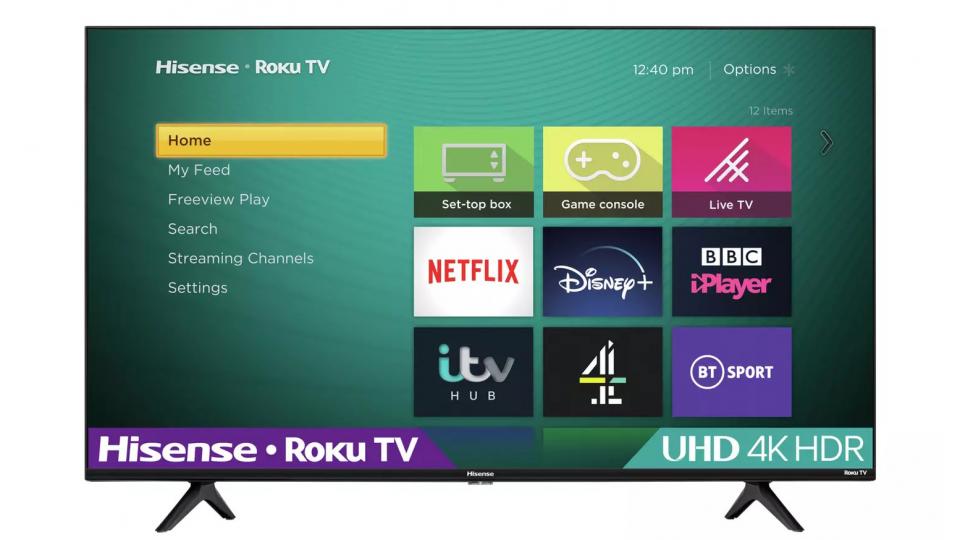 The first Hisense Roku TV, released in 2020, was a welcome addition to our living rooms. Customers in the US had been enjoying the built-in Roku OS experience for quite some time, and its UK debut did not disappoint. It was no HDR masterclass – no TV that cheap ever is – but it was still competent for 4K SDR playback. So how does its sequel compare? Well, I can tell you now that it’s not worth upgrading to the Hisense Roku TV (2021) if you already own last year’s model.

That’s not to say you shouldn’t buy it at all, however. If you’re looking to upgrade to 4K for the first time or need an extra screen then the Roku is an affordable option, and it’s easy to get to grips with thanks to its intuitive UI and basic settings.

Just like the first UK Roku TV, the Hisense Roku TV (2021) is sold exclusively through Argos. For this review, I was sent the 50in model, which is probably the ideal size to buy for most living rooms. The other sizes available are a 43in screen, a 55in set and a hulking 65in unit. Not much, if anything, has changed in terms of the panel technology: the 4K/UHD (3,840 x 2,160) panels are VA-type LCD LED direct-lit and have a 60Hz refresh rate.

Running the latest version of Roku’s OS, this Roku TV offers access to a complete roster of streaming platforms, including Netflix, Disney Plus, Amazon Prime Video, Now (formerly Now TV), BT Sport and Freeview Play. The HDR format support is limited to HDR10 and the broadcast-friendly Hybrid Log-Gamma, and for audio enhancement you get Dolby Audio and DTS Studio Sound.

To find a more suitable budget alternative, you could consider an older, but still perfectly good, TV from 2020, such as the LG UN7400 55in, which is currently only £469. Its IPS-type panel offers wider viewing angles than the VA display on the Roku and it happens to be the sequel to our favourite budget TV of 2019, the LG UM7400.

For an ultra-budget TV, the Roku TV 50in has surprisingly slender bezels, especially at the sides and top. These borders have been trimmed down since last year’s Roku TV release, although the plain black plastic chassis and two-pronged plastic legs aren’t going to win any design awards. The feet elevate the TV a few inches, leaving just enough clearance for a soundbar to sit just in front. 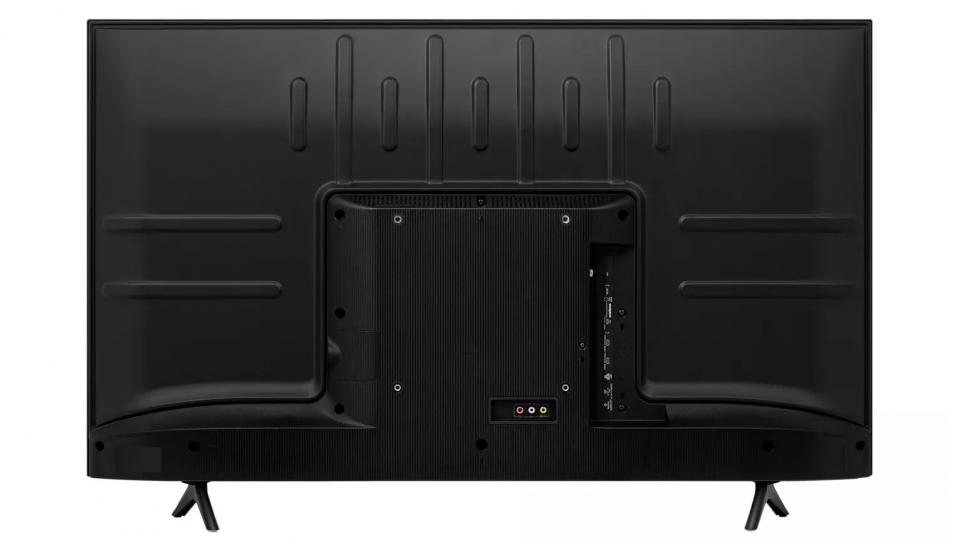 And you will certainly be wanting a soundbar. The TV’s dual 8w speaker setup doesn’t lack volume but it could use more bass and more clarity. Dialogue in particular can get lost among the noise. In terms of audio enhancement, Dolby Audio and DTS Studio Sound are supported.

At the back, the TV’s plastic chassis doesn’t look so streamlined, bulging out along the bottom and jutting far out in the middle. All the TV’s inputs are side-facing and sit at the rear centre of the panel, pointing out to the left. Below three HDMI 2.0 inputs there are two USB-A ports, composite, headphone and AV sockets, an optical connection and an Ethernet jack. 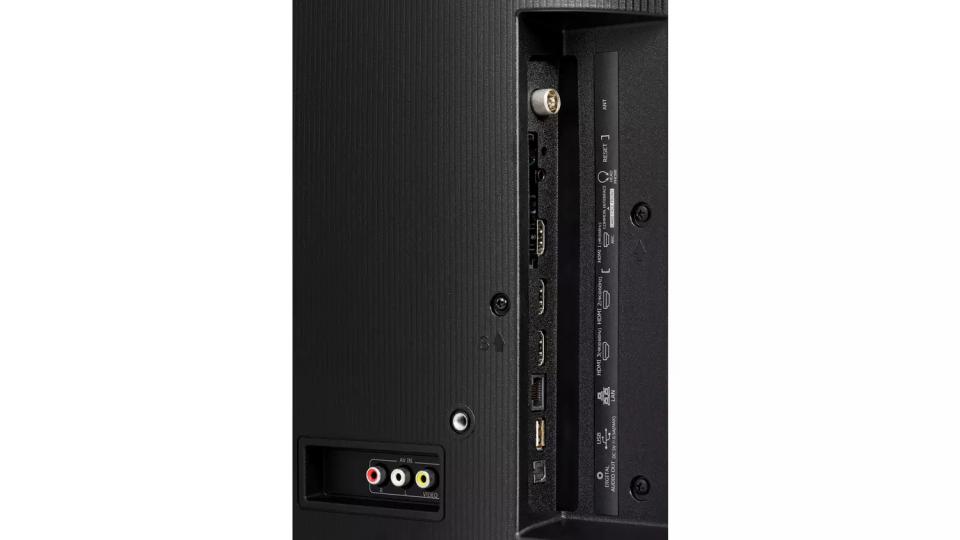 Frustratingly, the remote does not include a voice search button even though Roku OS supports voice search. The remote itself looks like an elongated version of the compact controllers included with Roku’s streaming sticks. I had become so used to using the voice search remote included with the Roku Streambar that I ended up ditching the TV’s standard remote and connected the Streambar’s remote in its place.

READ NEXT: The best soundbars and soundbases to buy

If you don’t have a Roku voice search remote, you can still use a variety of other voice-based assistants in conjunction with the intuitive Roku OS. The latest version of Roku’s platform offers Amazon Alexa, Google Assistant and Siri functionality, making the Roku TV (2021) a versatile buy for smart home enthusiasts.

And, in general, Roku OS is one of the best TV platforms out there. Its app store is home to every streaming service under the sun, but here’s a list of the key ones: Disney Plus, Netflix, Amazon Prime Video, Now, Apple TV+, BT Sport, Freeview Play, UKTV Play and YouTube. There are 931 apps in the Film & TV category, 484 in Games, 729 under Educational… the list goes on.

You can also install media players such as Plex, listen to audio apps such as Spotify and BBC Sounds, and choose from an endless list of screensavers. Of course, this is also a regular television, so you also can hook up to digital Freeview HD. And I can’t not mention Roku’s own streaming app, The Roku Channel, which has an ever-growing list of free content (with ads) to watch.

The panel technology in Hisense’s 2021 Roku TVs appears unchanged since last year. This TV still has a VA-type LCD panel that uses direct LED lighting without local dimming, as is the case for many cheap LCD TVs on the market. Being a VA (vertical alignment) panel, it does not have the wide viewing angles of an IPS equivalent. Hisense states that this panel has 176-degree viewing angles, but I’d recommend watching it straight-on. Sit off to an angle and you’ll notice a significant drop-off in picture brightness and colour vibrancy.

Since it’s direct-lit, the Roku TV’s screen uniformity is better than some of the edge-lit models I’ve had in my living room, but it’s still not perfect. Using Calman software and an X-rite calibrator to measure the panel’s uniformity across nine patches, I measured luminance differences that were between 2% to 4.4% off from the centre of the screen. This lack of uniformity does result in some DSE (dirty screen effect), or patchiness when the screen is displaying solid blocks of colour. When watching everyday content, however, this problem isn’t too noticeable. 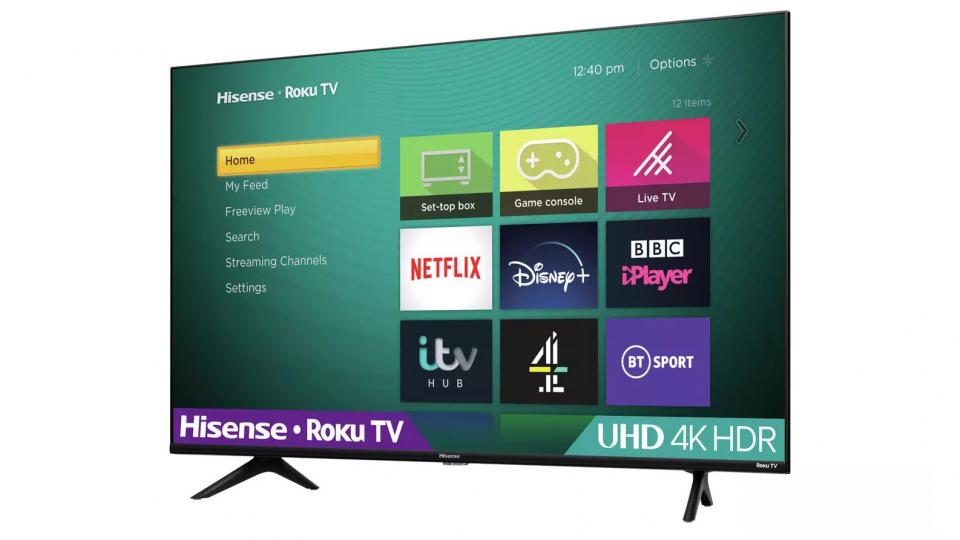 Colour accuracy and Rec.709 coverage for SDR coverage are on a par with the last-gen Roku TVs, although you need to tweak the settings somewhat. In Movie mode, on default settings, the Roku covered 98.7% of the Rec.709 colour gamut and delivered acceptable colour accuracy too, with an average Delta E of 2.9 (compared to the 8+ in other modes I tested). Greyscale tracking looks okay but there’s a slight blue skew, so images can have too cool a tint to them.

You can only access the Roku’s full picture settings by hitting the Option button while content is playing. These advanced settings are not available from any of the home menus. I should also note that there are different options depending on whether you are playing SDR content or HDR content.

No matter what mode you’re in, you’ll have to deal with a considerable amount of motion blur at times, since there are no motion-smoothing features on the Roku. The motion-handling issues are most noticeable when a light object is moving across a darker area, and the problem is exacerbated when watching lower-resolution content.

The Roku does a fine job of upscaling 1080p content to 4K without too much noise but 720p sources and below can look pretty messy, with a noticeable degree of blooming around objects.

For HDR playback, the 8-bit Roku TV only supports HDR10 and the little-used HLG. Dolby Vision or HDR10+ would be nice to see because these formats use dynamic metadata to get more out of the TV, but no other TV in this price range supports them either.

Using our HDR tests with the Roku on its default settings I measured a maximum brightness of 200cd/m² on a 10% white window and a contrast ratio of 3,666:1. So although the TV lacks brightness (it’s best watched in dark rooms), it delivers reasonably dramatic contrast between dark and light areas of the screen.

That kind of contrast is fairly average for a 4K VA-type panel and lends the HDR some pop despite the low peak brightness. Colour accuracy was not far off the SDR measurements with an average Delta E of 3.67 in the HDR colour checker test.

HDR content is by no means unwatchable on the Roku. The TV just isn’t imbued with the kind of tech that can blow you away with searing brightness and explosions of lifelike colour. After a month of using the Roku, I do still miss the high-impact visuals of the Samsung Q80T that I was using before; however, for only £399, the performance is rather impressive.

The latest Roku TV from Hisense was never going to achieve HDR mastery, and if that’s what you’re after then you’re going to have to up your budget. For a 50in 4K TV that costs less than £400, though, it’s pretty impressive. With the right settings, it’s able to deliver reasonably bright pictures, and its colour accuracy is more than acceptable at this price.

What’s more, Roku’s OS has the most comprehensive list of streaming services going and remains up there with the most intuitive smart TV platforms on the market. In the world of 4K smart TVs, this is about as cheap and user-friendly as it gets.