You are here: Home / review / Honor 8 Pro Review: In Depth

Honor 8 Pro review: Honor has just upgraded and super-sized the original Honor 8 smartphone and the result is the super-premium Honor 8 Pro. This may be Honor's most expensive mobile so far, but the Pro still undercuts most of its rivals and offers a great all-round experience.

Towards the end of 2016, Huawei’s funky and youthful Honor brand launched the rather splendid Honor 8. This was to all intents and purposes a flagship device, by far the most premium handset under the Honor name (and at £399 also one of the most expensive). In comparison, most of the Honor mobiles like the Honor 6X cost under £200 and pack much more modest specs.

Six months on, we have a new updated version of the Honor 8. The freshly-launched Honor 8 Pro doesn’t just boast some upgraded specs, however. This 5.7-inch mobile is much bigger than the original 5.1-inch Honor 8 too, putting it in line with Huawei’s mighty Mate 9.

At £475, the Honor 8 Pro is more pricey than its direct rival, the OnePlus 3T. However, Honor's handset sports some seriously impressive specs for that extra cash - and here's what we think after a full week with this mighty mobile.

The Honor 8 Pro’s boosted dimensions definitely makes it one for phablet fans alone. This mighty 5.7-inch mobile is significantly larger than the LG G6 and Samsung’s Galaxy S8, although the screen stretches almost edge-to-edge for a narrow build. In combination with the curved edges and corners, you have a comfortable enough device to clutch for extended periods.

Flip the Honor 8 Pro over and you’ll discover the shiny surfacing of the original Honor 8 has been ditched. Instead we have the same brushed finish of most other Honor handsets, available in a choice of three colours: gold, black and blue. We particularly like that navy model.

The Honor 8 Pro isn’t water resistant sadly, but that one-piece metal frame is rugged enough to tolerate some serious punishment. After three days of solid use, there isn’t a single scratch or scuff mark present. The camera bar is flush with the surface, so there aren’t any jutting bits to speak of.

Also around the back is the fingerprint sensor, which is slightly too high up for our liking. We occasionally had to stretch or adjust our grip to reach the scanner, although it is pleasingly responsive and accurate once you find it.

The Honor 8 Pro’s IPS display may not be the most vibrant out there, offering realistic image reproduction instead of punchy visuals. Still, that massive 5.7-inch screen boasts a Quad HD resolution just like the very best flagship phones (including Huawei’s own P10 Plus), which means plenty of detail packed into every frame.

If you’re after a portable media machine, you can’t go wrong; high-def movies look fantastic, while the spacious nature of the panel means you can comfortably watch movies or marathon YouTube videos for hours. A strong maximum brightness means you won’t be bothered by irritating glare when outdoors, either.

As usual you have a nifty Eye Comfort mode, which makes for more comfortable night time viewing. This filters blue light to make images easier on the eye, and reduce fatigue. Thankfully you can schedule this to automatically come on in the evenings too.

Got a big media collection to carry around? The good news is that the Honor 8 Pro offers 64GB of storage space, which can be expanded using a microSD memory card. Alternatively, you can slide a second SIM card into that memory card slot, if you want to use two at once.

Read next: Honor 8 Pro vs Honor 8, what's the difference?

Honor wants its users to enjoy virtual reality experiences on the Pro, so it’s rather cunningly packed the phone inside a box which converts into a Google Cardboard-style headset. A bit of light assembly gives you a functional set of VR glasses, which the Honor 8 Pro then slips inside. This can be used to enjoy any virtual reality games and videos, with Jaunt VR coming pre-installed on the handset.

Check out our unboxing video of the Honor 8 Pro below to see this in action. 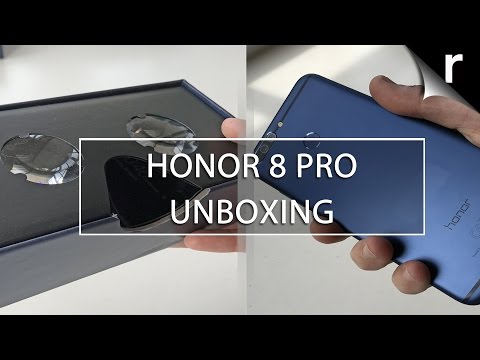 You get plenty of other apps installed on the Honor 8 Pro too, including a selection of free games and lots of Huawei efforts for managing the device, tracking your daily activities and so on. Thankfully you can uninstall any you don’t want.

Huawei’s latest Emotion UI 5.1 overlay also offers the option of adding an apps tray, so you can hide away apps instead of having them clutter your desktops.

EMUI 5.1 sits on top of Android Nougat, and in combination they deliver plenty of great features. For instance, you can multitask with two apps side-by-side (a great use of that massive screen), fully customise your notifications bar and turn on various tools to make one-handed use much more bearable.

As this phone is a bit on the big side, those one-handed features really do help. They include the ability to shrink the desktops towards the bottom edge of the screen, as well as swiping the fingerprint sensor to drag down the notifications bar.

Check out our in-depth EMUI 5.1 review for more info.

The Honor 8 Pro sports the same high-performance Kirin 960 chipset found in Huawei’s premium devices such as the P10, P10 Plus and Mate 9. As a result, the Honor 8 Pro offers a buttery smooth experience no matter what you’re doing. The latest games play with a perfect frame rate and you’re unlikely to see any kind of stutter or lag for quite some time.

Even better is the mighty 4000mAh battery packed inside. Like the Mate 9 before it, the Honor 8 Pro gives two full days of use between charges, even with quite heavy use. That includes plenty of messaging and web browsing, plus audio and video streaming, camera use and the occasional phone call.

You can charge the Honor 8 Pro in good time, too. Roughly an hour and a half at the plug is enough to fill that massive cell.

One area that hasn’t been updated for this mighty mobile is the camera tech. The Honor 8 Pro sports pretty much the same dual-lens Leica camera as the Honor 8, offering two 12-megapixel lenses with f/2.2 aperture and laser autofocus. However, you can at least now shoot 4K resolution video.

To see what we think, check out our full Honor 8 Pro camera review.

The Honor 8 Pro might be the most expensive Honor handset around, but it still costs roughly £100 less than many other flagship smartphones. Despite that, you can expect pretty much the same features to be packed in. That includes a feature-stuffed dual-lens camera, a spacious and sharp Quad HD display, solid performance and excellent battery life.

If you're after a premium handset for a bit less cash, the Honor 8 Pro is a solid rival to the OnePlus 3T.

Check out the Honor 8 Pro in action in our video review below. 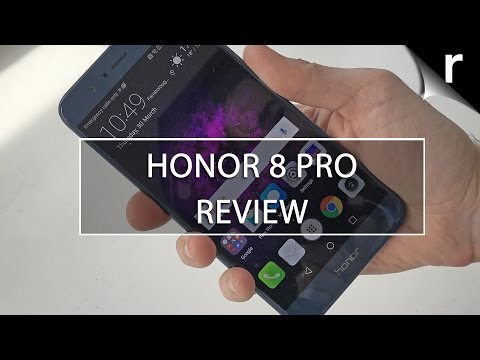