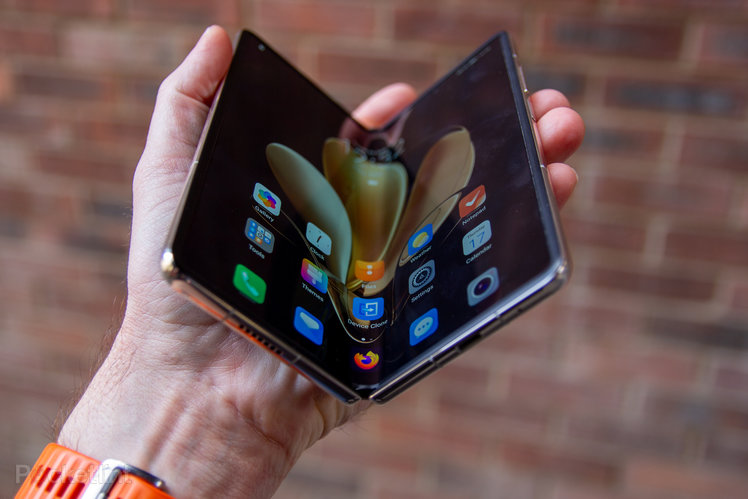 Folding phones are widely talked about, but outside of Samsung, there aren’t many manufacturer with devices you can actually buy.

That limitation applies to the Honor Magic V, which is only available in China, with no indication that it’s going to go on sale elsewhere – but it’s an interesting device that indicates the direction of travel for this format.

We spent a little time with the new phone and while you might never be able to buy this model, it does help push the market forward.

The Honor Magic V adopts the same format as the Samsung Galaxy Z Fold, in that it opens like a book to reveal a large internal display. There’s some similarity to the Huawei Mate X2, which might be explained by these companies having a shared past, although a cursory glance that the spec sheet reveals these phones differ in many areas. 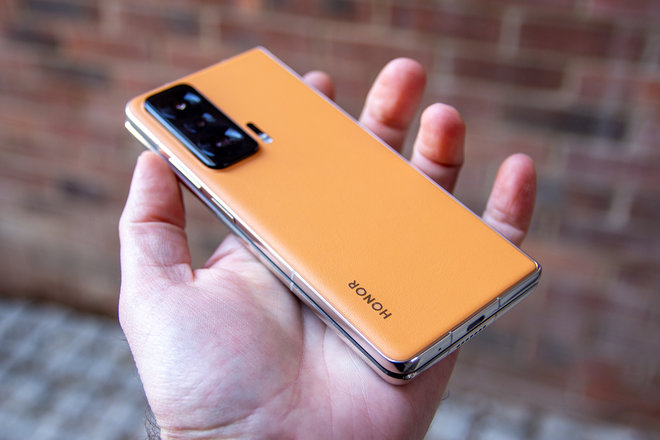 There’s a good quality of build to the Honor Magic V (and it’s probably worth explaining that it is a V, the letter, rather than the Roman numeral 5) and we’re particularly taken by the vegan leather back.

This Burnt Orange option (pictured here) lends a feeling that’s more like a book and it feels great; if you don’t like the idea of that, there’s a Space Silver or Black option which both have a glass back. The glass options weigh a little more. 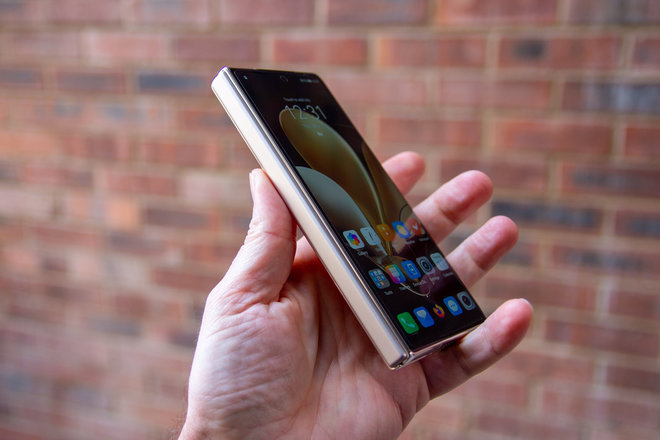 As to the dimensions, the 6.7mm thickness when open is impressively slim, while the hinge feels solid enough on first impression. When closed it folds flat on itself, making for a great finish.

There are speakers on both ends of the device frame, along with a fingerprint scanner and volume control. There’s a USB-C connection for power (or headphones and other devices).

Folding phones are all about the display and in the case of the Honor Magic V, it opens up to present a huge 7.9-inch display. This display has an aspect of 10.3:9, so it’s almost square, with a 382ppi. That’s a higher pixel density than the Apple iPad mini, for reference.

The internal display is flexibly, folding into a waterdrop shape inside the hinge. Of course there’s a crease you can see down the centre of the display when open, although we’ve never found these creases to distract from the experience when in use – so nothing to worry about there. 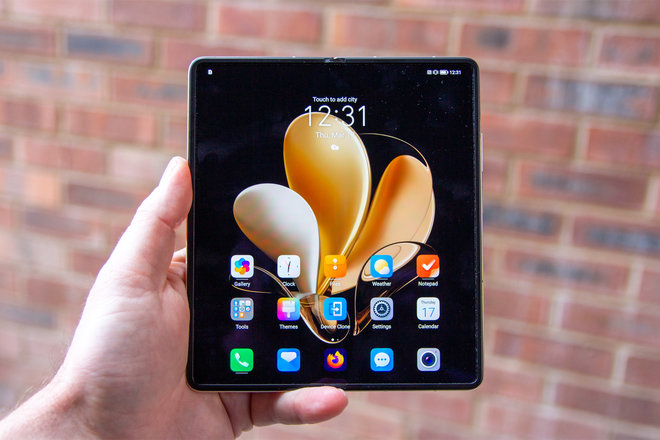 There’s a raised bezel around the display and this – as is the case with Samsung – does mean that things aren’t quite as refined on these displays as they may be in the future, but that raised bezel is there to ensure that when closed there’s some protection for this display.

The main display looks great and is responsive, based on our first impressions, while also being HDR10+ certified. It’s coated with a nano optical film that’s designed to reduce reflections – and certainly, outdoors, we found it to retain visual fidelity. 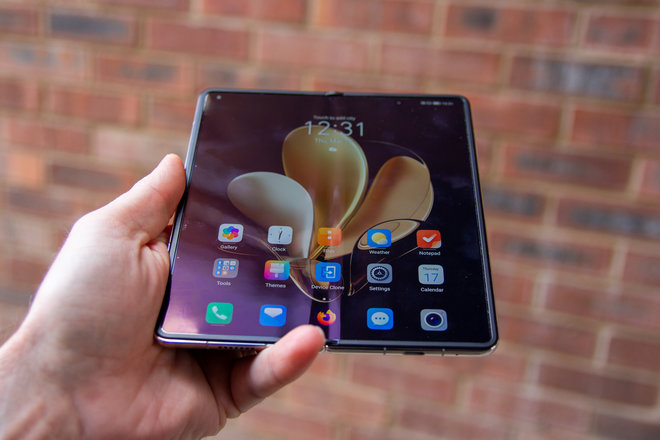 The display gives loads of space for content to pop, it looks great with images which can be huge, so it’s great for browsing. While it might not be the correct native aspect ratio for movies, we’ve found in the past that these types of display work really well with showcasing content on social media, while giving works more space to get things done.

Moving to the exterior display and this is 6.45-inch, but fills pretty much all of the exterior, so it’s a useful size. 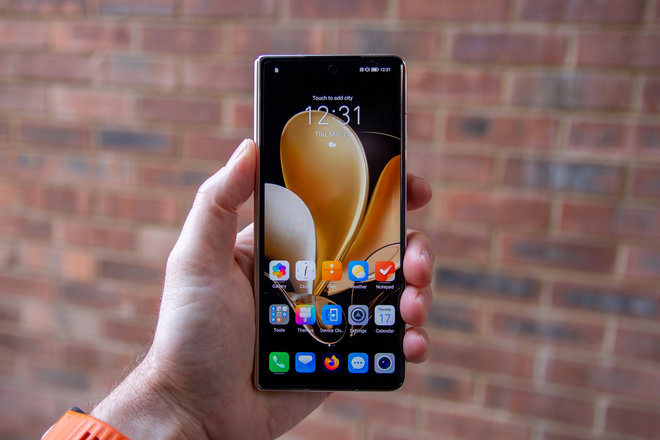 It’s also well appointed, offering a 120Hz refresh rate, so if you’re scrolling through things it all moves smoothly past. Again, it’s HDR10+ certified and has essentially just looks like a narrower version of the display you’d find on many other smartphones.

We didn’t get the chance to spend too long with the phone, so we can’t fully determine the performance of these displays.

One of the appealing things about the Honor Magic V is that it comes with the latest hardware, with the powerful Snapdragon 8 Gen 1 inside, paired with 12GB of RAM. This is one aspect of the phone we really didn’t get the chance to examine in the short time we spent with it – but experience with other Snapdragon 8 Gen 1 devices suggest there’s oodles of power.

We also don’t know how that battery will stand up in daily use. While some smartphones now have a larger capacity than this, it’s not too different to the battery you’ll find in Samsung’s 2021 folding phone. It’s paired with support for 66W charging, with a 66W charger in the box. 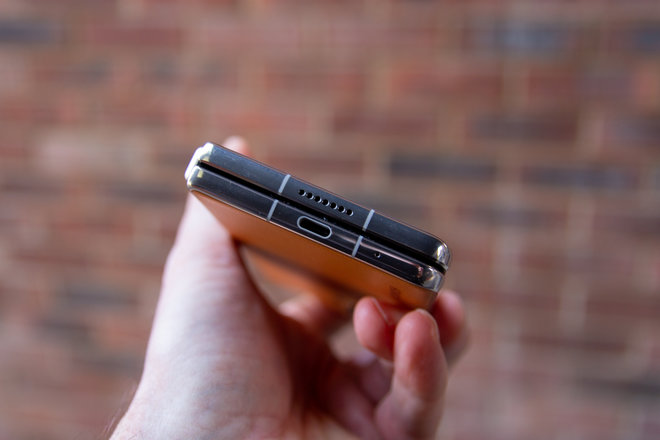 The performance side of the Honor Magic V is something we really can’t pass judgement on, unfortunately. The phone launches on Magic UI 6, which sits on Android 11. But as this phone is aimed at the Chinese market, there’s no Google services included with this sample.

As we said in the introduction, Honor isn’t planning to launch the Magic V outside China, the software experience is again something we can’t really pass judgement on, except to say that everything seemed plenty smooth moving around the user interface.

While there’s a triple camera on the rear of the Honor Magic 5, there’s something missing from this arrangement: there’s no telephoto lens. Instead, there’s a 50-megapixel main camera, a 50-megapixel ultra-wide camera and something called a Spectrum Camera.

Honor doesn’t really tell us what the Spectrum Camera does – but it’s also included on the Honor Magic 4 Ultimate – where it says that this gives the camera system a way to look at tricky environment (like mist) to give you better results. 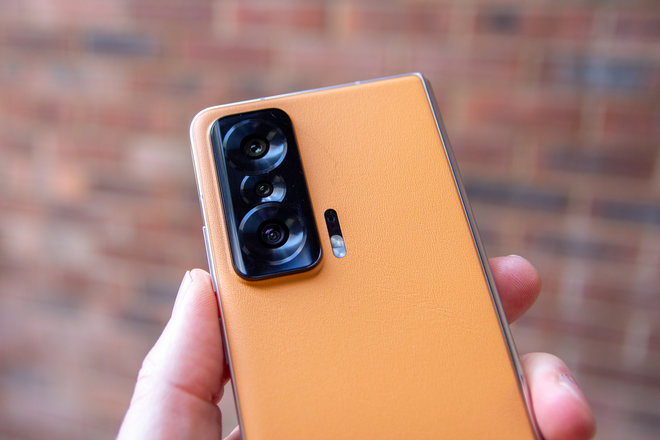 That leaves us with the 50-megapixel main camera and 50-megapixel ultra-wide camera. We can’t verify the performance of these cameras on the short time that we’ve spent with the Honor Magic 5, but it’s also worth noting that there’s no optical image stabilisation here either, suggesting that this isn’t a camera that will compete with flagship models.

As for the front camera, this is a 42-megapixel sensor and there are two of them, one on the main display and one in the cover display, so you can take a selfie however you’re using the phone.