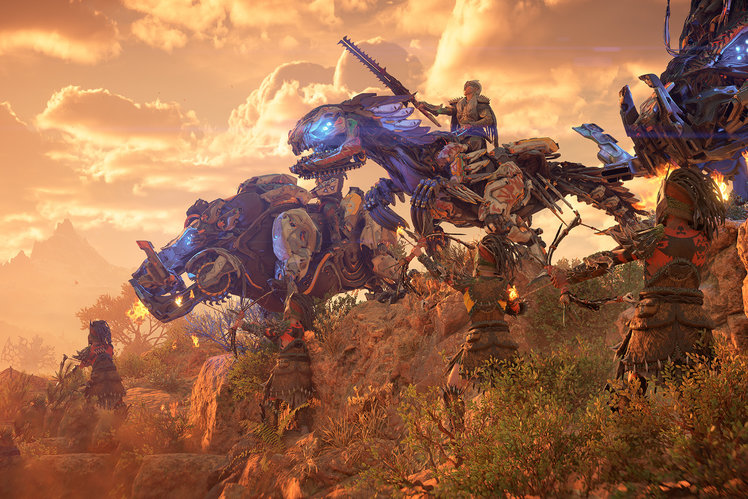 Guerrilla Games might have already had success with the Killzone titles for multiple PlayStation platforms, but it was really Horizon Zero Dawn that elevated the studio to a higher level. The 2017 action-RPG had everything – stunning graphics, a heartfelt and complex storyline, and invention cascading from every pore. Indeed, if it wasn’t for a certain Breath of the Wild also releasing that year, it would have no doubt swept game of the year awards across the board.

Now we have a Horizon sequel and, who knows, the developer may well have another chance at ultimate glory. Zero Dawn 2, or Forbidden West as it’s officially known, has certainly pulled out all the stops with a continuation of Aloy’s adventure. It is bigger, bolder and, on PlayStation 5 at least, even more beautiful.

Horizon: Forbidden West is a PlayStation exclusive of epic proportions and shows why this IP is comfortable sitting at the same table as Uncharted, The Last of Us, Marvel’s Spider-Man and God of War. It’s really that good.

That’s not least because, in Aloy, Guerrilla Games has created one of the most interesting female characters in gaming. Having started out as an exile at the beginning of the first game and rising to become the saviour of Meridian, she is now an accomplished and much-loved hero. The sequel reflects that, both in the story and gameplay mechanics.

It starts soon after Zero Dawn left off. Aloy is looking for a backup of the Gaia software protocol that has the potential of restoring the Earth’s ecosystem and averting another extinction level event for its inhabitants. However, things don’t go quite to plan and after the Hades AI seemingly rears its head again, she has to follow it to a new region – the eponymous Forbidden West.

This allows for new mysteries to unravel and even more of our lead’s past to become clear. We’ll hold off on giving you any major plot spoilers as the discovery is half the fun, but needless to say it’s as expansive and complex as in the first.

The game world is as realised too. For those who are unaware, the Horizon games set an interesting premise – that many years after civilisation was effectively wiped out, mankind started again with tribes dotted around the landscape, hunting and foraging to survive. But, rather than animals inhabiting the wilds, machines with animalistic traits do instead. Some are deadly, some enormous, and some can be trained as steeds. 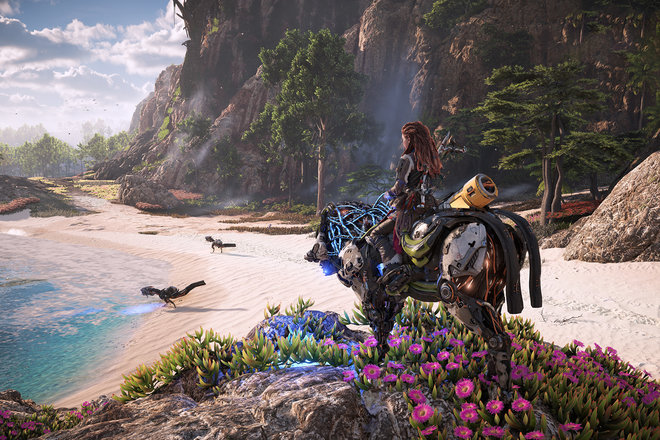 Aloy is one of few capable of tackling and even befriending them, not least because she has a “focus” – a Bluetooth earpiece-style device that gives her data on the past and enables her to get information on everything around her, especially of the metallic, autonomous kind. Forbidden West expands on this theme and presents further clues as to what it all means and why the past and the present are possibly closer linked than previously thought. Oh, and there are a fair few surprises along the way.

It makes for a great tale that unveils as you play, but that’s not all there is to the game. This is a massive open-world adventure and as such is crammed with additional extras, side missions and collectables to while away your time on too.

Like most open-world games, including the previous Horizon and its DLC, The Frozen Wilds, there are plenty of fetch quests, puzzle zones, and resource gathering to be done. Much is optional, but considering it utilises a similar XP system and level progression as before, it’s wise to do as much as you can to ensure your skill set is as rich and diverse as possible. 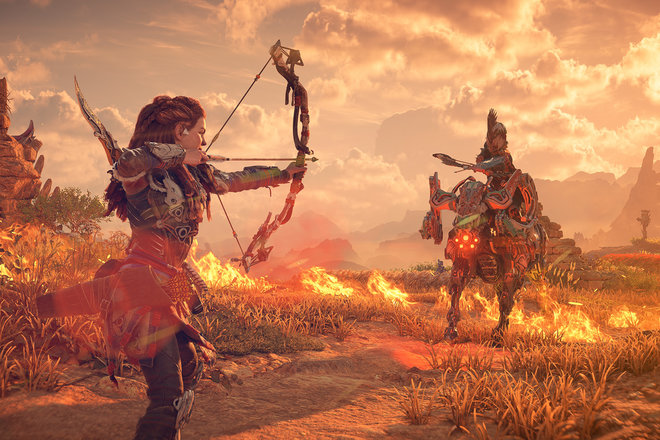 There is a slightly more advanced skill tree in the sequel, with six new categories to expand your combat, stealth, and general abilities. Warrior, Trapper, Hunter, Survivor, Infiltrator, and Machine Master each come with a healthy array of benefits to unlock. You earn skill points (by completing main and side missions, generally) and can assign them as you go. Like many action-RPGs of this ilk, it enables you to build a character to suit your own play style. And, as there are plenty of points on offer throughout the game, you’ll get a lot of opportunities to tweak.

The same can be said of weapons, which in Forbidden West is similar in practice to Zero Dawn, just bigger and with more options. Weapons can be levelled-up, as too can outfits, while coils can be fitted to enhance elemental effects, damage or the like. Basically, this is classic Horizon just on a larger scale.

There are also some unique new tools and weapons, such as a Shieldwing that can be used to glide through the air, or the Pullcaster that can tear down walls or help Aloy leap to higher climbing points. They are discoverable at certain points in the campaign, but can also be used to go back to previous areas to complete puzzles that weren’t accessible before. 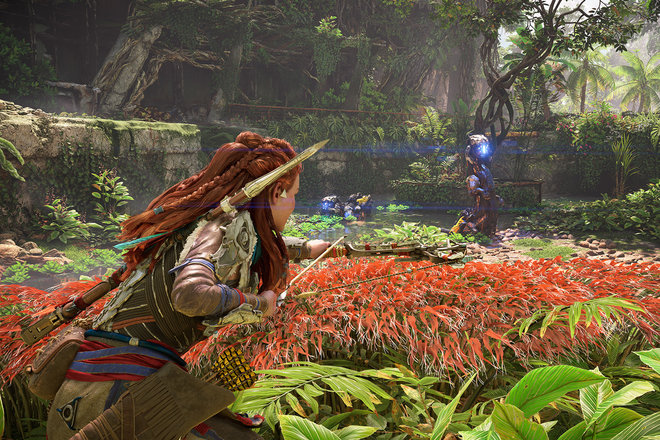 Crafting is largely the same as before, too, with resources both natural and mechanical plentiful throughout.

Like The Witcher and many recent Assassin’s Creed games, there are additional tasks and games within that have little to do with the plot, but fun to complete nonetheless. 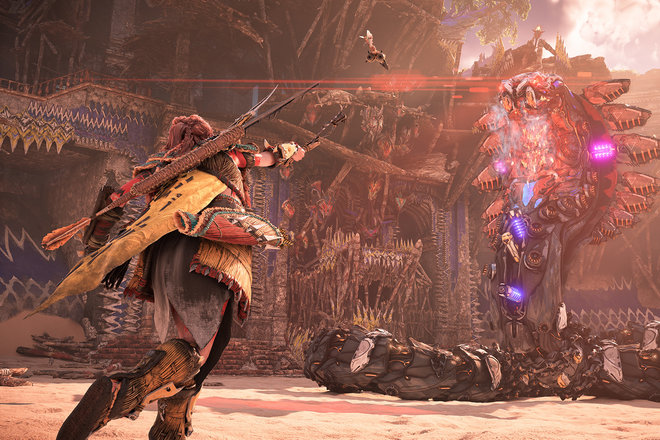 Throughout the Forbidden West, you’ll find Machine Strike players wanting a challenge. This is an invented board game that combines chess, draughts and tabletop wargames. You collect Strike pieces on your travels (based on the different machines you discover) and pit them in battle against these players in order to earn credits and other Strike pieces. It’s not as involving as Gwent, say, but is a nice distraction and change of pace.

Hunting grounds return, to test your mettle against different machines, and there are the occasional Melee Pits dotted around to hone your close-quarters combat skills. The latter is especially useful as you’ll often find yourself in melee with the Rebels – a new threat of disparate tribal foes who just so happen to also be able to control the machines. There are plenty of other minor exploration sites to be found too.

Fast travel is a must, especially once you’ve unlocked most of the huge map, and thankfully that’s once again done through campfires (which also act as save points). If you also want to fast travel from elsewhere, you can purchase fast travel tokens from traders. Tall necks return too, to remove the “fog of war” obscuring vast zones once you’ve managed to climb them. 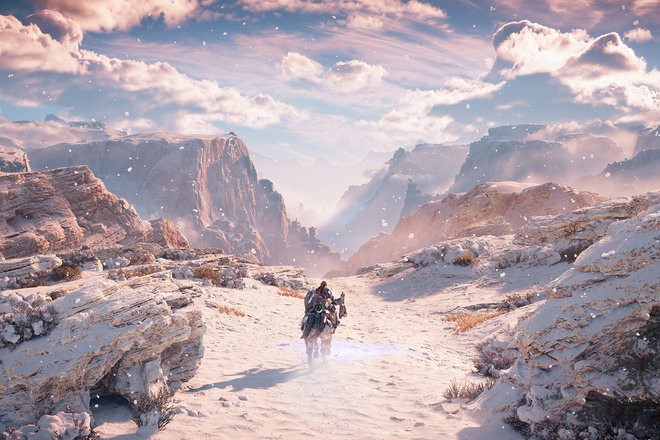 In short, this is a mammoth game (geddit?). But thankfully it never feels too big to handle. The balance is just right.

We’ve played the PS5 version exclusively so cannot comment on how it runs on PS4 or PS4 Pro. What we can say is that there are so many benefits to playing on current-gen hardware that it’s obviously the best way to do so. 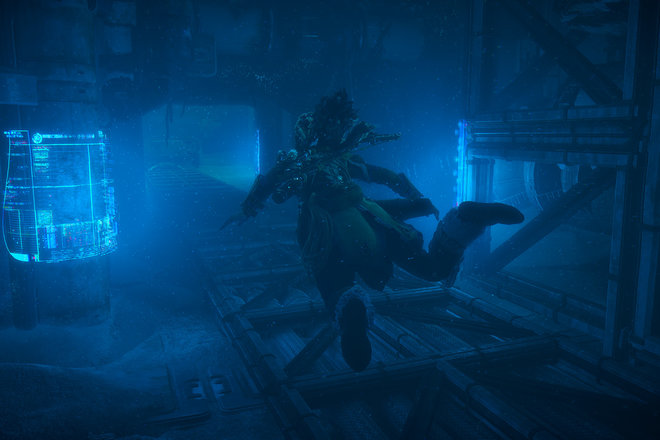 For starters, there is good use of the adaptive triggers on the DualSense controller. The R2 button throbs as you draw an arrow, for example, and gives you the correct amount of tension to make it a more physical experience.

Loading speeds are greatly enhanced too. With such a mighty map and a lot of graphical detail it could have suffered from pop-in or texture issues, but that’s not the case. There’s a very brief loading screen when you fast travel between locations but nothing to write home about. Having the PS5’s SSD makes a game like this so much more accessible and smooth, that’s for sure.

The other big enhancement comes graphically. The PlayStation 5 version offers in terms of graphical real estate, making the game world seem more dense, but also has two game modes to play in.

If you favour resolution, you get what looks to be a native 4K presentation, but running at 30 frames-per-second. Favour performance and the frame rate jumps up to 60fps, albeit with a softening of the image a touch. We’re not sure exactly what the resolution drop is, but it’s slightly less crisp all-round. That said, we’re more than happy to put up with the latter to get a more buttery smooth experience. It certainly benefits the boss battles you’ll stumble upon at points. 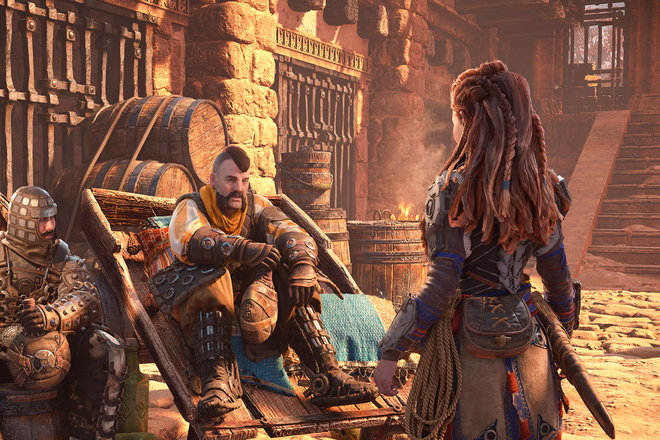 Guerrilla Games also states that the same lighting used in cut scenes is enabled in the main game too, but only on PS5. Certainly, it looks fantastic.

Animation on character models is jaw-dropping – it was already good in the original, but has been improved further for Forbidden West. The acting is exemplary too, from all the cast not just Ashly Burch as Aloy. When combined with the Hollywood-style soundtrack and effects work, it makes for a bundle that is a true blockbuster.