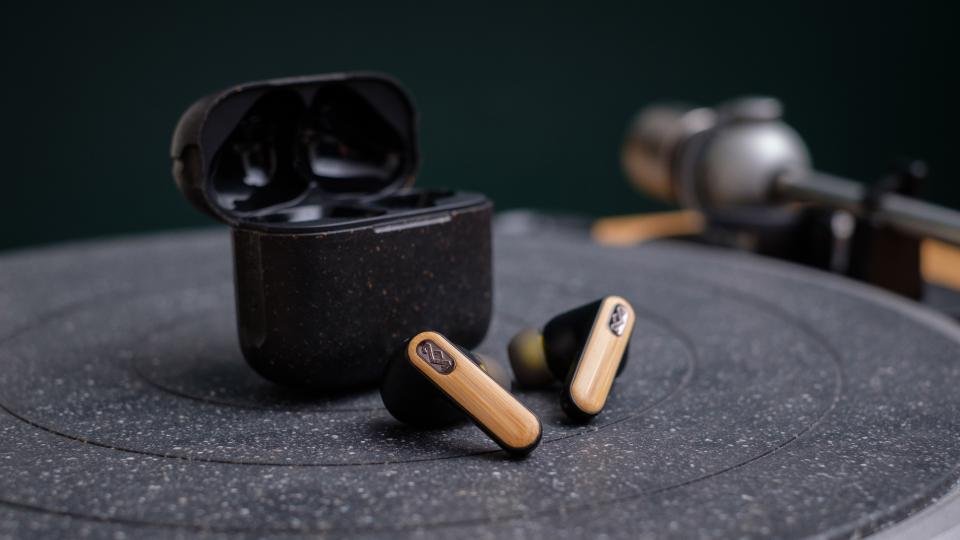 Though not flawless, House of Marley’s Redemption ANC 2 succeed with excellent audio quality, lots of features and eco-conscious ideals

The House of Marley Redemption ANC 2 are the latest and most feature-packed true wireless earbuds from a brand whose mission statement is as dedicated to protecting the Earth as it is high-quality audio products.

Though not without their faults, the Redemption ANC 2 manage to satisfy both goals with style, delivering powerful, detailed audio, well-implemented features and decent stamina, all wrapped up in a sustainably produced package. If you care as much about environmental impact as you do impactful audio, the House of Marley Redemption ANC 2 may be the eco-conscious earbuds you’ve been waiting for.

House of Marley Redemption ANC 2 review: What do you get for the money?

The House of Marley Redemption ANC 2 retail for £150 – £30 cheaper than their predecessors were at launch. Despite the discount, the Redemption 2 are no downgrade from the first model, once again operating over Bluetooth 5.0. The only disappointment is that there’s still no support for high-resolution audio codecs, only SBC.

The waterproof rating has been bumped up to IPX5, meaning they can hold up against low-pressure liquid streams, so you won’t have to worry about getting caught in a rainstorm. As mentioned, House of Marley wears its eco-friendly colours proudly, using sustainable materials including bamboo, natural wood fibre composite and recycled plastic in the construction of the Redemption ANC 2 earbuds, their case and the charging cable. They even ship in plastic-free, recyclable packaging.

The Redemption ANC 2 are available in either black or cream, with three pairs of differently sized eartips included in the box to help you find the right fit. Both colours are complemented by a strip of bamboo that runs down the outside of the stem. The overall design is stylish and pleasingly lightweight, with each earbud weighing just 5g. The case is equally discreet at 45g, and looks unique thanks to its speckled wood-composite frame and matching bamboo panel. 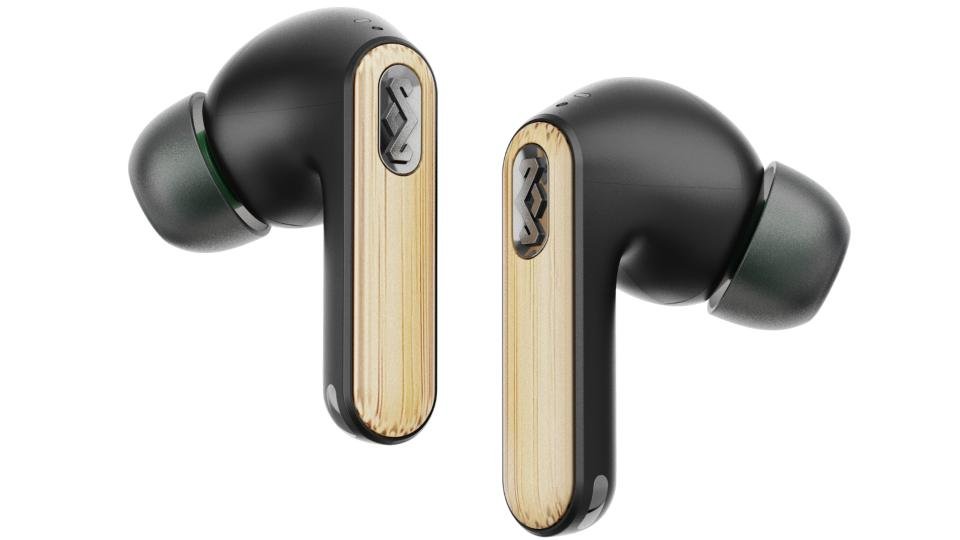 A small House of Marley logo sits on the outside of each earbud, marking the location of the touch controls. These cover all of the usual bases, including skipping tracks, hailing your voice assistant and activating the noise cancellation, as well as the less common volume adjustment. Playing and pausing isn’t coded in as standard, due to the fact that the Redemption ANC 2 also feature wear detection, which automatically pauses playback when you remove an earbud and resumes when it’s returned to your ear.

If you want to swap something out for the play/pause function, you can fully customise the control scheme in the Marley app. Here, you can also tweak the ten-band graphic equaliser, either saving your own tuning or picking one of the eight available presets, and toggle the active noise cancellation and ambient modes.

The final useful feature of the Marley app is battery readings for each earbud. House of Marley list the battery life as roughly six hours in ear and a further 18 in the case, for 24 hours total. According to House of Marley, these figures apply regardless of whether the ANC is on or not, though your mileage will vary depending on volume. Both wireless and fast charging are supported here, with the latter yielding two hours of playback from 15 minutes of charging.

House of Marley Redemption ANC 2 review: What do we like about them?

Before we get into the audio quality and feature set, it’s worth examining what House of Marley’s commitment to sustainability actually looks like. In addition to using eco-friendly materials, House of Marley has (at the time of writing) partnered with One Tree Planted and the Surfrider Foundation, with a focus on reforestation and ocean preservation respectively.

Nothing is said of the metals used in the earbuds – the sourcing and later disposal of which pose one of the biggest environmental impacts – nor the notion of designed obsolescence, which all but dooms earbuds to landfill the second that a bigger and better successive product is released. Still, it’s unfair to lay all this solely at House of Marley’s door, as these are e-waste issues that plague the entire industry, and the measures outlined here are at least steps in the right direction, not to mention more than most other brands are doing.

If the moral ethos doesn’t completely convince you, the audio quality delivered here will likely nudge you over the finish line. As these earbuds come from a brand whose identity was created in collaboration with the family of Bob Marley, it seems only fitting to put them through their paces with some of the biggest hits from the reggae icon and his peers. 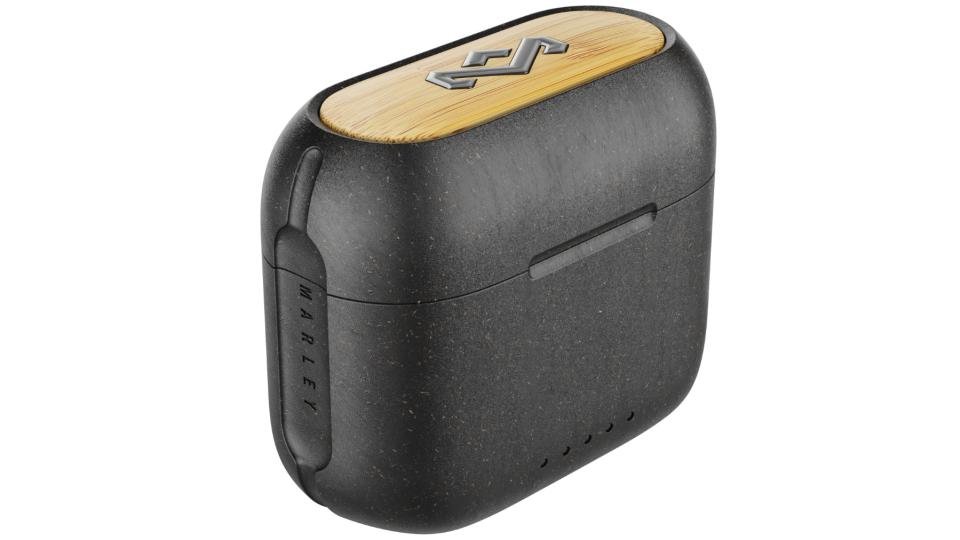 Kicking off with one of Bob Marley & The Wailers’ own, and the namesake of these earbuds, “Redemption Song” enters a broad soundstage with a deeply resonant guitar riff before the stark and articulate vocals come in. Between Marley himself and the dynamically shifting guitars, the upper range gets a rigorous workout in this song but the earbuds never falter, delivering crisp treble with detailed precision, and no sign of any distortion.

Looking to the other end of the frequency spectrum, the lower registers are perhaps even more important, given that rhythm and meter are such integral parts of reggae. Suffice to say, the Redemption ANC 2 do not disappoint here either. Nothing highlights this strength better than Gregory Isaacs’ “Night Nurse”, whose thrumming bassline pulses beneath the rest of the track, establishing a strong rhythm without ever smothering the lower mids.

If you ever feel the need to tinker with the strength of the bass or any other element of the composition, the Marley app is straightforward and user-friendly. Unsurprisingly, all the reggae I used to test these earbuds sounded best on the Signature tuning, but you’ve also got Jazz, Rock, Treble, Acoustic, Bass Booster, Bass Reducer and Classical to play around with. The latter, for instance, highlights the mids and trebles with just enough weight in the low-end, beautifully articulating piano-heavy pieces such as Beethoven’s “Moonlight Sonata”.

Noise cancellation performed well in my usual tests, drowning out the whistle of a boiling kettle and cutting down the roar of a busy road, though a low rumble could be heard in the quiet moments between songs. Ambient mode isn’t the most impressive that I’ve experienced, but it did the job well enough, allowing me to hear someone talking to me while music was playing. Wear detection is more in line with the competition, accurately pausing roughly two seconds after I removed a bud and restarting even quicker when I put it back.

House of Marley Redemption ANC 2 review: What could be improved?

The biggest problem plaguing the Redemption ANC 2 is the complete lack of support for high-resolution audio codecs. This issue also cropped up with the original Redemption ANC, so it’s all the more frustrating to see that nothing has been done to rectify this. As mentioned, the audio quality is fantastic even limited to just SBC, but for this price I would at the very least expect to see AAC and aptX supported as well. 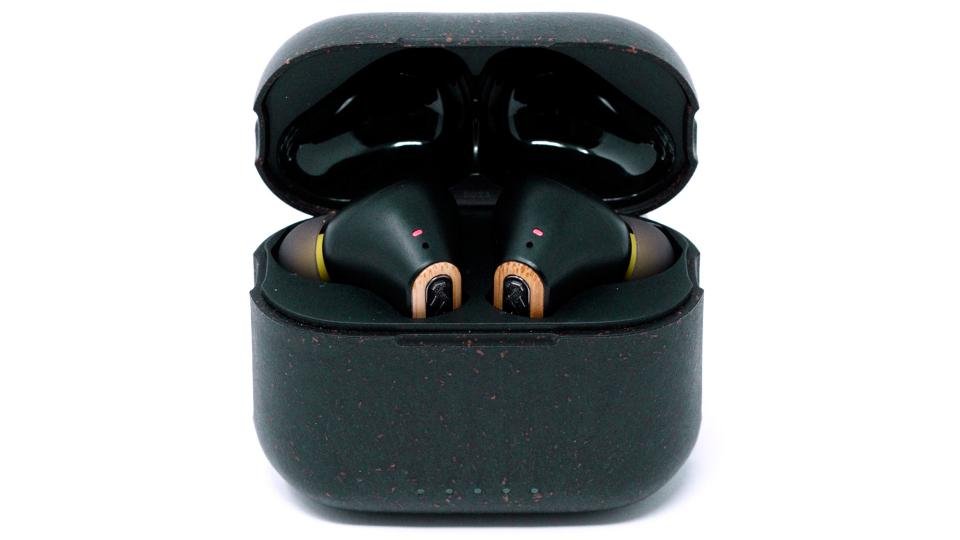 If we’re being nitpicky, battery life could also be improved. To be clear, what you get here isn’t bad, it’s just the very definition of average. For the same price, you can get the Audio-Technica ATH-CKS50TW, which aren’t as stylish and don’t offer equally effective noise cancellation, but boast a total battery life of around 50 hours. I’ve also recently looked at Cambridge Audio’s £100 Melomania Touch: these have a more limited feature set, with no ANC present, but last for an impressive 40 hours in total.

House of Marley Redemption ANC 2 review: Should you buy them?

The reasons not to buy these earbuds are few, but they will matter enough to certain people to make them worth bearing in mind. Audiophiles who want to make the most of their music with high-definition codecs will most likely find the Redemption ANC 2’s limitations to be frustrating. Equally, fans of day-long listening sessions should look to one of the above-mentioned alternatives that offer improved battery life.

For everyone else, however, this is an easy recommendation. The audio quality is superb, with rich detail and powerful bass, and the list of features is extensive and well implemented. Moreover, if your passion for music is matched only by your eco-conscience, the House of Marley Redemption ANC 2 are about as kind to the environment as earbuds get right now, making them the ideal choice.