The era of non-rectangular and weirdly-shaped phones seems to be over. Most if not all phones that are launched today are rectangular in shape. There is not much a company can do with the shape of its smartphones. But there is one manufacturer that is challenging the status quo. A brand called dTOOR is launching The Cyrcle Phone 4G LTE (yes, it includes ‘The’ in the name), which is a circular smartphone. It doesn’t compromise on the UI front as it runs Android 10.

While the phone manufacturers are getting rid of the headphone jack these days, dTOOR is including two of them on its latest offering. Further, it supports two SIM card slots as well. Not only does The Cyrcle Phone feature two headphone jacks, it sports two USB ports as well: a USB Type-C 3.0 and a USB Micro B 2.0. It comes with recyclable and biodegradable enclosure components. Consequently, not only is it user friendly, it is environmentally friendly as well. Currently, The Cyrcle Phone 4G LTE with Android 10 is only available via presales. 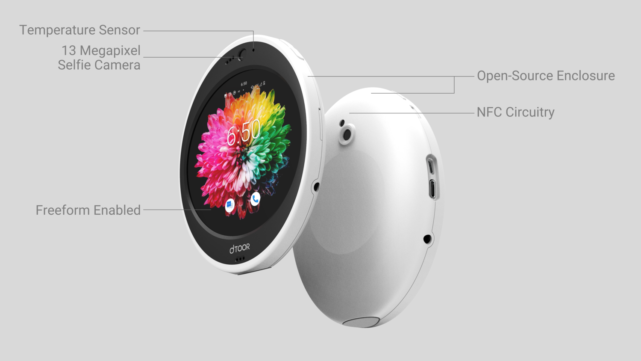 The device features an IPS LCD display, and a capacitive touchscreen of 3.45-inches. Because the phone is circular, the screen size is measured in diameter, and not diagonally. It comes with a modest 800 x 800 pixel resolution. The company doesn’t reveal which processor powers its circular phone. The specs page only tells us that the device is powered by a Qualcomm Snapdragon chipset. Alongside the dual-SIM connectivity, you also get a microSD card slot.

The Cyrcle Phone offers 3GB of LPDDR3 RAM and 32GB of eMMC storage. On the back lies a 13MP camera, which can record 4208 x 3120 videos at 30fps. Plus, you get a 13MP selfie shooter with same configuration. As for the sensors, it offers support for accelerometer, gyroscope, magnetometer and a temperature sensor. It packs a 2,000mAh removable battery and weighs 147 grams.

The Cyrcle Phone is priced at USD 999 for retail. However, you can get it for USD 699 for wholesale or via presales.