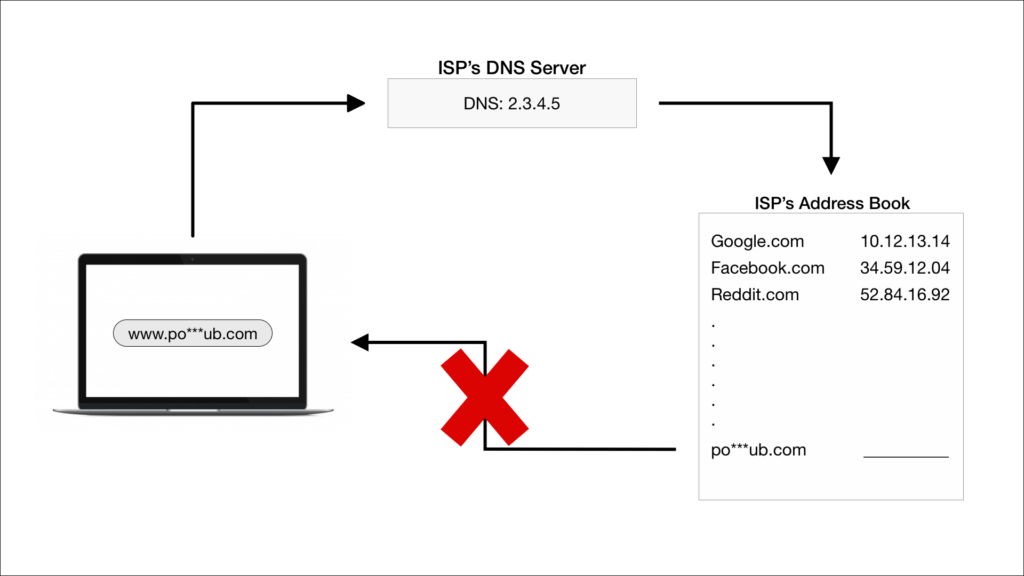 Well, after a lot of research (actually going through research papers and journals), I found out that the government cannot directly control the internet, unlike China, where the government doesn’t rely on network providers. Rather, it legally orders the Internet Service Providers (ISPs), operating in its jurisdiction, to block the access. This too is implemented in different ways by different network providers.

Every website in this world (like google.com, reddit.com) has an IP address that is somewhat like 12.13.14.15 (not exactly this!). Every time you type in a website’s URL in the address bar, this URL (www.google.com) is converted to its respective IP Address. This conversion is usually done by the ISP’s own Domain Name System (DNS).

There are other open-DNS ‘resolvers’ too, like Google (8.8.8.8) and Cloudflare(1.1.1.1), but most of the service providers around the world configure it to their own DNS, so they can control what set of sites their users can access (in turn blocking the adult site). Every ISP maintains a ‘phonebook’ like address book which has the IP address of all the websites in the world.

When you hit enter after typing in the address, the URL is sent to the ISP’s DNS, which then looks for the IP Address in the ‘Address Book’ and returns the IP address to the browser. This all happens in a matter of milliseconds!

When the government orders to block a site, ISPs just deletes the IP Address entry in the Address Book, maybe changing it to their own error-page, or just leave it blank so that the DNS doesn’t return anything and the connection times-out. And you get the error page.

How to Unblock Websites?

Well, there’s a simple way to unblock these websites. Using a VPN you can bypass these government restrictions. VPNs generally have their own DNS server, which in turn can return the IP Address of all the websites, while some rely on open-DNS like Google and Cloudflare.

You can easily find plenty of VPNs on the iOS App Store and the Google Play Store.