Windows 11 is a breath of fresh air in terms of design compared to Windows 10, and we wholly recommend the upgrade in our Windows 11 review. But truth be told, not every change was a positive one, and one of the things you might find annoying is that you can no longer see the date and time on the taskbar on a second or third monitor in Windows 11. Only the primary monitor shows it, but thankfully, there are ways to work around this.

The good news is Microsoft is already working to change this behavior, and you can try those changes right now by joining the Windows Insider Program. If you don’t want to do that, there are some apps that also restore that functionality. Or, if you don’t mind waiting, this capability should be rolled out to all Windows 11 users in March, so you don’t have to do anything. Here’s how you can add the time and date to the taskbar on your second monitor in Windows 11.

We’d say this is the easiest option if you want to add the time and date to the taskbar of the second monitor in Windows 11. Microsoft recently released Windows 11 build 22000.526 to Insiders in the Beta and Release Preview channels, and that means it’s fairly safe to try this out. As you can read in our explainer of the Windows Insider Program, the Release Preview channel is where Microsoft tests updates just before they head out to the stable release. That means they’re usually practically finished, and you shouldn’t run into any big issues.

To get the time back on your taskbar this way, do the following:

Once you’ve received this update, you might want to unenroll from the Windows Insider Program. Head back into the respective page to unenroll your PC from getting preview builds, and you’ll be back to receiving the regular monthly updates.

Option 2: Use ElevenClock to customize the time and date on the Windows 11 taskbar

If you don’t want to join the Windows Insider Program, another option to add the time back to your taskbar is using an app called ElevenClock. This app can add back the time and date on all your monitors, but it can also do a lot more than that if you’re interested.

All you need to do is download the latest version of ElevenClock from GitHub and run the installer. Once it finishes installing, you’ll immediately see the time and date on the taskbar of all your monitors. If you want to customize your settings, you can go to your Start menu and open ElevenClock Settings, which gives you tons of options. 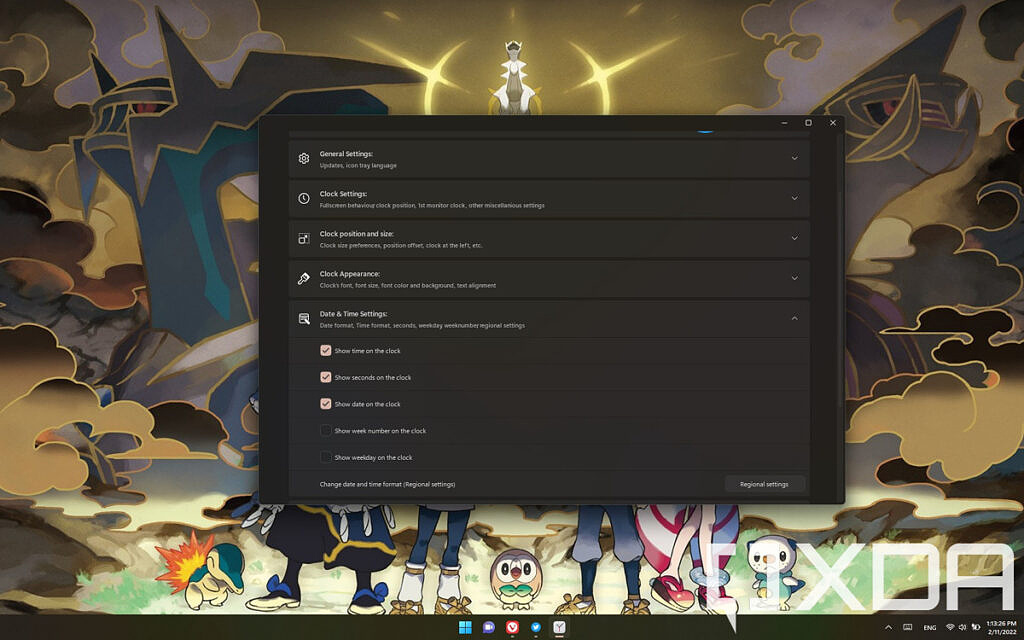 You can align your clock to the left of the taskbar, hide the notification badge, and much more. There’s even an option to add seconds to the taskbar clock, which you might find useful since Microsoft also removed that feature from Windows 11. There are plenty of options, so explore them at your own leisure.

In order for the features to work, you’ll need to make sure ElevenClock is running at startup. That’s enabled by default when you install the app, so you just have to make sure you don’t disable it.

And that’s all there is to it. It’s a very simple fix, but if you don’t want to do any of this, you can just wait for Microsoft to release the next cumulative update for Windows 11. The next Patch Tuesday will be on March 8, and that’s when the update will arrive, likely adding this feature back in, though it should also be available earlier as an optional update. That could change if any issues come up, but that’s unlikely to happen. Aside from adding a clock to the second monitor, you can expect a new Widgets button showing the current weather on your taskbar, new features for Teams, and more.

The post How to add the time and date to the taskbar on a second monitor in Windows 11 appeared first on xda-developers.