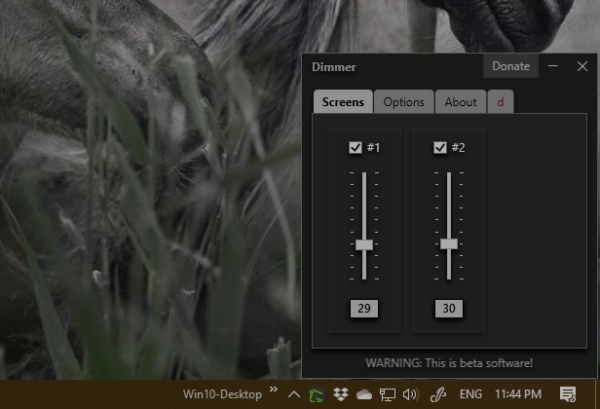 Almost all laptops have a function key dedicated to turn the screen brighter or dimmer but not so much for the desktop computers with external monitors. All you get is the buttons on the LCD monitors that you can fiddle with, which is not so easy to figure out most of the times.

Developed by Nelson Pires, Dimmer is a free portable tool designed for the Windows system to help control the brightness of your computer screen, monitor or display. It comes really useful when the minimum brightness from your display’s control is still too much in a dark environment.

Since it’s portable, you can just download the tool, extract the executable file from it and run it. When it runs, it detects all monitors connected to the computer and displays them all in a slider mode that you can easily slide up and down to adjust the brightness of the monitors.

And you can choose which one to dim if you have multiple monitors attached. By default, all monitors are dimmed.

Under Options tab, you can set the tool to run automatically during the startup, start the tool in minimal mode, and with a bonus to show screen’s identity.

Believed it or not, Dimmer has been around since 2004 when Nelson decided to tackle the problem of working at night with minimum ambient light in the room. It’s been actively maintained by him ever since as well. Kudos to him.

The post How To Adjust Brightness of All External Monitors appeared first on Next of Windows.