One of the most long-awaited features that arrived in iOS 14 is the ability to decide for yourself which apps are the default for both email and web browsing. This means that whenever you tap a link or email address, you won’t have to be taken to Safari or Mail, but instead can have your iPhone open Chrome and Spark instead. At the moment, the capability is limited to these two types of app, but hopefully in the future we’ll see calendars, maps and other useful tools move to this method.

But, in the meantime, here’s how to set a different default email and browser app in iOS 14.

How to change default web browser on iPhone

It’s quite a straightforward process to get your preferred browser app as the go-to one on iOS 14. Here’s what you need to do: 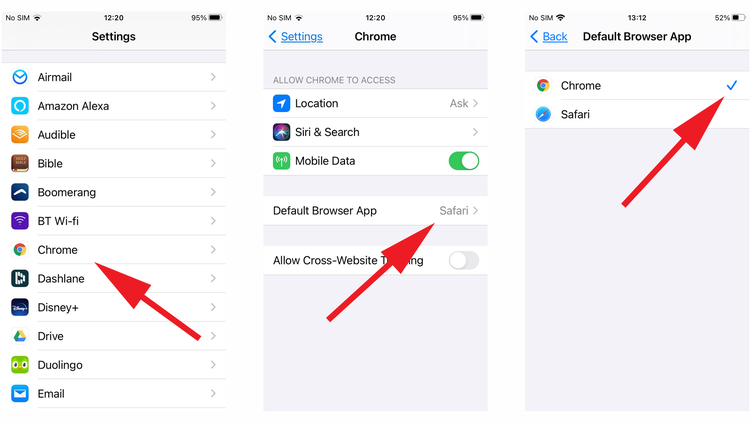 Now, whenever you click on a link, Chrome will be the app where it opens, rather than Safari.

Naturally, you’re not limited to those two choices, so take a look at our roundup of the best iPhone web browsers to see which ones we recommend.

How to change default email app on iPhone

As you’d expect, the process is pretty much identical when selecting the default app for handling your emails. Again, there is a wide range of options available, so be sure to check out our selection of the best email apps for iPhone and we’re sure you’ll find one that is a step up from the rather basic Mail app offered by Apple.

Here’s how to set the new app as your preferred choice: 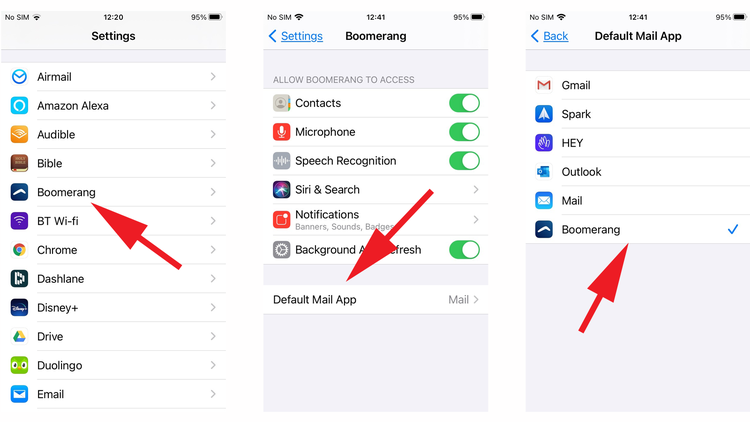 That’s all there is to it. Now, when you want to quickly send a message to a friend you can tap on the link and Gmail will open instead of Mail.

There are a few caveats with the new default app feature. The first was that a bug in iOS 14 meant that whenever an iPhone was rebooted, the defaults would reset back to the Apple variants. Apple patched this in iOS 14.0.1, but apparently the default app setting will reset every time the new default app receives a software update. For example, if you set Gmail as your default email app and Gmail has a software update, the system will default back to Apple Mail afterwards.

Read more about the problems with iOS 14 here.

The other is that when using Siri to create emails, even when we’ve set Gmail as our preferred choice, the digital assistant always uses Mail instead. As this is a new feature, some things are bound to go wrong, but we’d definitely like to see this issue addressed very quickly by Apple.

For more ways to further customise your iPhone experience read how to change app icons in iOS 14.

If you don’t have a device that runs iOS 14 or would rather wait a while to see how the battery drain issues many users have experienced pan out, then there are some ways to change the defaults in iOS 13, albeit using more hacks than settings. We explain how to do this in the next section.

How to change default apps in iOS 13

iOS 13, remains a polished and user-friendly piece of software, with a wide range of well-integrated apps that will do a great job for most people, most of the time. But that doesn’t mean the default iOS 13 experience can’t be improved.

Name almost any preinstalled Apple app, and we could name an alternative by a third-party developer that will be better for some or even most users. Calendar is fine, but Fantastical (which recently, and controversially, switched to a subscription model) is better. Mail is fine, but you’ll get more from Gmail and Spark. Many of us prefer Google Maps to Apple Maps, although the latter has been catching up recently. And Safari has plenty of rivals for the role of iPhone web browser.

The problem, and one reason why many even quite tech-savvy users don’t make the switch, is that Apple’s own apps are set as the default. This means that when you click on a web link, it’ll open in Safari; when you click on a postal address it’ll be shown in Maps. It’s difficult to change this behaviour – Apple runs a tight ship – but in this tutorial we explore the best ways to use alternative apps on your iPhone.

To change the default iOS apps on your iPhone so that your chosen apps are automatically used to open web links, street addresses, calendar invites and so on, you need to jailbreak your iPhone (which we don’t recommend). Even then, it’s not as simple as entering the settings and flicking a few toggles – you need to install specific apps to enable each customisation. Here are three jailbreak apps worth trying. (Hat-tip to Lifewire for the recommendations.)

Run a search on Cydia for the name of your chosen third-party app and there’s a good chance you’ll find a solution for jailbroken phones.

As usual, however, we have to warn less experienced iPhone users that Apple does not approve of jailbreaking your device, and that doing so may void your warranties; it also puts you at a higher risk of installing malware, since it enables you to download apps from non-official sources.

Assuming you don’t want to jailbreak your iPhone – and many don’t fancy this – then you cannot make a non-Apple app the default in any of the areas outlined above. Not properly. Nevertheless, some apps’ settings let you do something pretty close.

The most obvious example is your web browser. Let’s say you want Chrome to be default rather than Safari – which isn’t possible without jailbreaking. But while iOS itself won’t let you specify an alternative default browser, some apps will.

If you use Flipboard, tap the profile icon (the righthand icon in the bottom bar) then hit the Settings cog. Tap Browser, then select an alternative. From this app at least, Chrome (or whatever you choose) will now be the default for opening web links.

In Gmail, tap the hamburger icon (three horizontal lines) at the top left, scroll down and tap Settings > Default apps. You’ll be able to select the web browser, mapping app and calendar that are used by default from Gmail. The same options can be found in the settings of other Google apps, such as Google Docs, Sheets, Photos and Translate – just look for an option labelled Default Apps.

For each (non-Apple) app you use, and particularly for those which frequently have web links, dates, postal addresses and other elements that would normally lead to an Apple app being launched, check the settings and look for the option to change the defaults.

After working your way through your app settings, you’ll probably still find some gaps – apps that refuse to let you change the default web browser, for example, and carry on opening all links in Safari.

Even at this point, you may find that you can induce different behaviour by manually selecting a different option each time you click a link. Experiment to find the best approach, but tapping and holding a link instead of tapping and releasing is a good place to start – frequently this will bring up a list of options, which may include Open In, from which you can select a different browser.

Sometimes this is rather awkward. In the iOS Twitter app, for instance, tapping and holding a web link pops up a mini preview of the page; you can then tap the share icon at the bottom, tap More, tap Chrome, and finally hit Open in Chrome. Not really worth the hassle – particularly as Twitter opens links without leaving the app, so it doesn’t make a huge difference which browser is selected.

Similarly, most Apple apps will (for understandable reasons) make you jump through hoops. Press and hold a URL in Notes, say, and the Open function offered is Safari. But you can still select the Share option, and find your way through to Chrome via the circuitous route listed above.

But in other cases it’s more straightforward. In WhatsApp, for example, pressing and holding a web link brings up a menu with Open Link (which is Safari) and Open in Chrome below. That’s not a huge hardship. 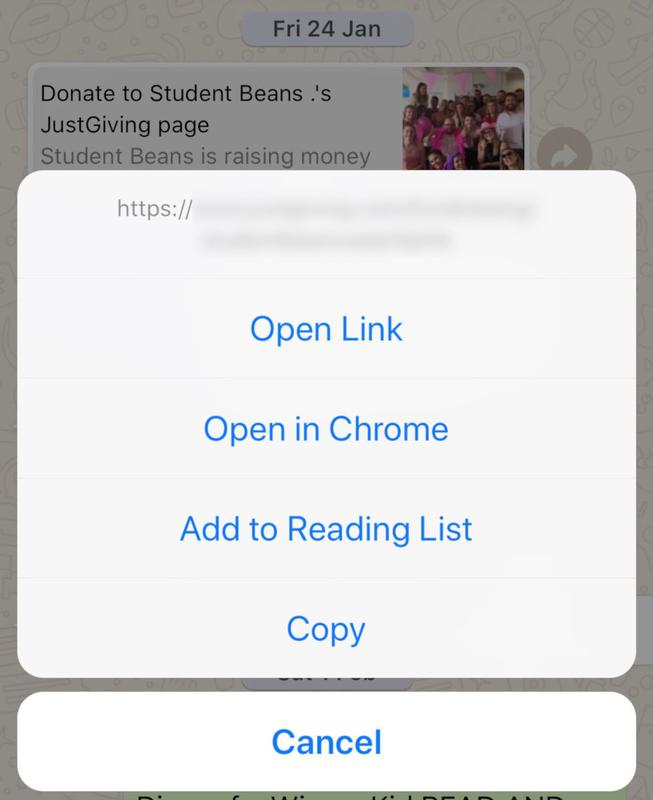 What about deleting the original app?

This is, as far as we can tell, a red herring. Yes, Apple does allow you to delete some preinstalled apps (by tapping and holding the icon until it starts wobbling, then tapping the X and confirming). But we haven’t been able to get iOS to then default to an alternative.

We tested this by deleting Maps, then manually writing a postal address in Notes. This was transformed automatically into a tappable link; we tapped it, hoping to be sent to Google Maps. Instead, we were only given the options to ‘Restore “Maps”?’ Or cancel the action.

You could try experimenting with deleting other Apple apps, but we suspect that the same will happen with all of them. In any case, many of the most important Apple apps – including Safari, Photos, Camera and Phone – cannot be deleted at all.

Is it worth changing default apps?

If you’re a jailbreaker – or are willing to become a jailbreaker – then yes. But if you’re not, you have to weigh up the pros and cons. You have to decide if the benefits of using a non-Apple app are enough to outweigh the extra effort.

If you’re a huge fan of Fantastical, say, and think it outclasses Calendar in every way, then it’s probably worth combing through the settings in your other apps and trying to make it the default calendar app where possible. If you just think Chrome is a bit nicer than Safari then it probably isn’t.

For what it’s worth, having weighed up the pros and cons the writer of this article uses almost entirely default iPhone apps rather than the alternatives. The only exception is Google Maps, and even there I just use it from launch; if a web page sends me to Apple Maps then I put up with it because it’s actually not bad. But you’ll have to make this decision for yourself.

Now you know how to change your default apps, you’ll be wanting advice on which apps to choose instead. Read 9 best alternatives to Apple’s stock iPhone apps for more information on this important topic.