Apple became engulfed in scandal back in 2019 when concerns were raised around Siri users’ privacy. Because of this, some customers may wish to delete their Siri history on their Apple devices – and in this article we show how to make this happen.

Update: in February 2022 it emerged that Apple had been accidentally collecting Siri recordings due to a bug in iOS 15. Apple addressed the error in iOS 15.2 in December 2021 by stopping such recordings happening on affected devices. The company claims all such recordings were deleted. Read: Why Siri will ask permission to record users again in iOS 15.4.

Why you should delete your Siri history

Although most of these were regular Siri interactions, if customers had accidentally triggered Siri then the recordings sent to Apple could be of a private or sensitive nature. To make matters worse, these recordings were accompanied by location, user details and app data.

We discuss the furore – and the adequacy of Apple’s response – in our article Is Siri listening to my conversations? But one indisputable outcome has been that users can now delete their Siri data on iOS, iPadOS, watchOS, macOS and tvOS, and opt out of letting Apple sample their voices to improve Siri.

How to delete Siri data

First, you’ll need to update your device to iOS 13.2, iPadOS 13.2, watchOS 6.1, tvOS 13.2, and macOS Catalina 10.15.1. Apple added improved privacy for Siri users in these versions of its mobile, TV and desktop operating systems.

The methods of actually deleting the data are largely similar, but the exact one you use will depend on your device. 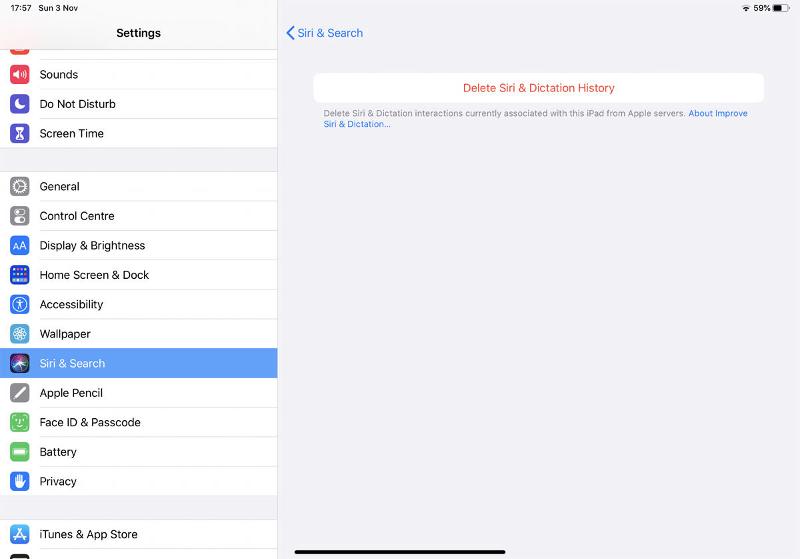 For users of Apple’s HomePod, which also features Siri integration, go to the HomePod settings in the Home app and choose Siri History. Then choose Delete Siri History.

How to opt out of Siri analytics

When you upgrade to iOS 13.2 on your device, you’ll receive a message asking if you’d like to opt into sharing your Siri and Dictation data with Apple as part of its analytics and improvements service. If you opted in but have since changed your mind and would like to withdraw consent, it’s easy to do.

On your device, navigate to the Privacy section of the Settings app. Then select Analytics & Improvements, find a button marked Improve Siri & Dictation, and toggle the switch into its off position.

Apple will no longer use your Siri and Dictation data in its efforts to improve the voice recognition service. Of course, if you happen to change your mind, you can give consent by toggling the switch into its on position.